At its core, the Surface Pro X is a convertible PC, and Microsoft wants users to think of it as any other PC, with the advantage of outstanding battery life. Microsoft says the Surface Pro X can get upwards of 13 hours of "typical usage" out of a single charge on its battery, and we certainly planned to put that to the test.


Living with the Surface Pro X

The first thing we did was replace our 3rd generation iPad Air with the Surface Pro X. That meant it got to hang out with us in the kitchen looking up recipes and playing songs on Apple Music. For recipes, the larger 13" screen helped quite a bit over the iPad's 10.5" display, since we could see more of the recipe while zoomed in. 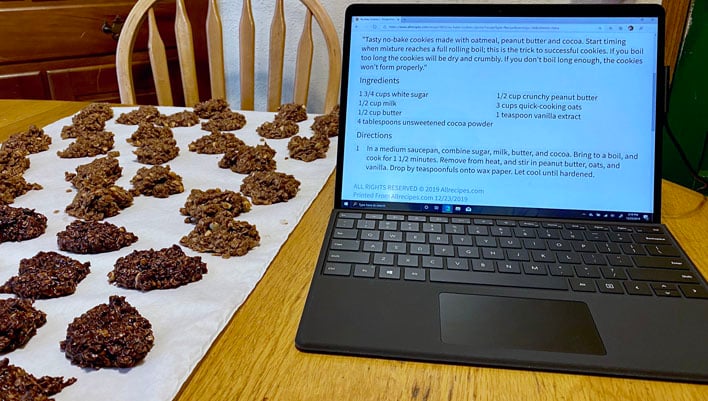 Instead of Shot On iPhone, maybe Microsoft should launch Baked With Surface?

Apple Music works in iTunes, even if it's a bit limited, by using the playlist selector in the Browse tab. Better than that, it sounded pretty good. The Surface Pro X has a pair of stereo speakers that could fill our kitchen with jams while whipping up a couple batches of no-bake oatmeal cookies. Between the bigger screen and the speakers arranged appropriately (the iPad's speakers are stereo but only have left and right separation in portrait mode), the Surface Pro X made for a mighty fine media consumption device.

Those extra loud speakers came in handy on a trip, too. We made a two-hour trip into Iowa to meet up with family, and used the Surface Pro X for navigation. Thanks to the built-in cellular radio, we had Verizon's 4G LTE network all the way from our house outside Peoria all the way to Davenport and back. We could also use the Surface Pro X for any online activities without thinking about a Wi-Fi network or worrying about being in range. Everything on the net and in the cloud was just always-connected, always available. 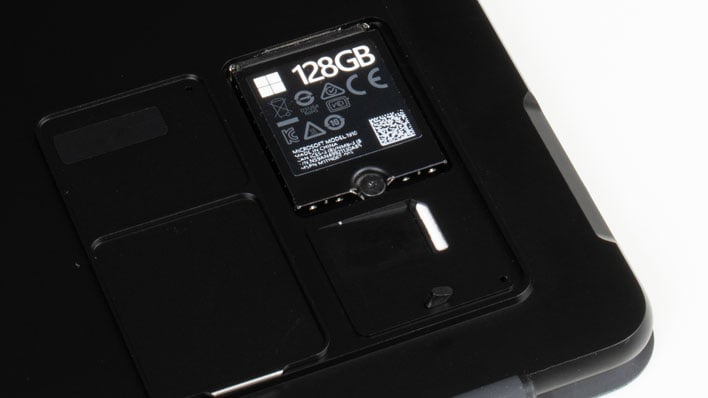 These devices had very low power usage while sleeping, so they could always be connected, get email and calendar appointments, and instantly wake up at the press of a button. We're used to whipping a smartphone out of our pocket and having it instantly available at the press of a button. We don't normally expect that same behavior from a larger device with more power under the hood like a Windows PC. Those 2017 devices had Snapdragon 835 SoCs on board, so they weren't necessarily as powerful as a typical notebook. With the passage of time, however, technology progress marches on.

It took a while, but Microsoft's own hardware fulfills that same niche now. As we discussed earlier, Microsoft teamed up with Qualcomm to produce the Microsoft SQ1, which a semi-custom tweak of the octal-core Snapdragon 8cx-based SoC and platform that allows the Surface Pro X to be always connected. iPad users are used to a mobile OS on a bigger screen that can do that sort of thing, but Microsoft now promises the full-fat Windows experience with instant-on technology.


The All Weekend PC Experiment

To test that out, we didn't plug in the Surface Pro X all weekend. It endured around two hours of screen-on time in the kitchen, showing us recipes, playing YouTube videos, and performing various other web-based tasks. It also not only handled four hours of maps navigation to make our round trip, with also plenty of email checking or web browsing in down times.

All told the Surface Pro X lasted four days of on-and-off use and navigation while never being attached to the charger. It was always ready with the latest email or calendar update, played videos and music, and surfed the internet, too. Our experiment started on Friday morning, and finally on Monday night we got the 10% "critical battery" notification, so we gave in and plugged it into power. Over that four days it saw around 10 hours of use (including that navigation time) while staying connected to the internet and waiting patiently for someone to pick it up. While that's short of the claimed 13 hour uptime, it also took on four days of idle time, so we were pretty impressed. 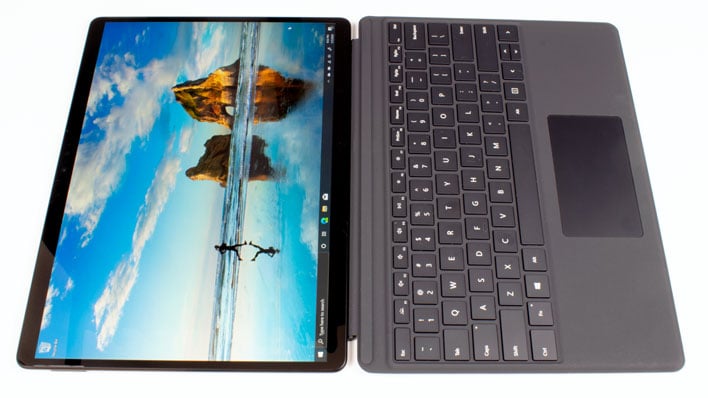 Put another way, the Surface Pro X could take a pretty full day's worth of use and can sit idle for an additional 80+ hours without the battery expiring. That's anecdotal, to be sure, but it seems that Microsoft's Qualcomm-based PC has multi-day battery life, helping us stay connected when we needed it most.


How Windows 10 on Arm works

To make Windows on Arm happen, Microsoft adapted some existing compatibility layers and frameworks to make it all work. Way back during the Itanium days, Microsoft created WOW64 - Windows on Windows. WOW64 is more a collection of technologies that includes anything from the x86 software emulator used by those IA64 systems to the x86 compatibility used on x86-64 systems today. Now, that also includes running Arm 32-bit apps on Arm 64, along with an emulation layer to run traditional x86 applications on Arm devices.


This means that any 32-bit Windows application other than a driver (which needs to be rebuilt for Arm) should be compatible with the Surface Pro X. Windows 10 does this via WOW64 by converting blocks of x86 instructions into Arm 64 instructions, and caching them on the device. These cached blocks can be optimized further when they're run multiple times. The company doesn't go so far as to call this "machine learning", but Microsoft's documentation does make it sound like Windows can improve performance after multiple passes.

In practice, this is all pretty transparent. For instance, Chrome is not available for Arm 64 on Windows just yet, so that's a perfect case study. Opening and running Chrome on the Surface Pro X is just like running Chrome on any other Windows PC. The browser opens quickly and navigating the web felt fine, if occasionally a little sluggish. We'll talk about performance shortly, but you'll be limited to 32-bit x86 apps, since 64-bit apps aren't supported by WOW64 on Arm at this time. And therein lies the rub.


Of course, nobody would buy a Surface Pro X to run emulated apps all of the time, but as an initial stop-gap measure it would limit compatibility issues significantly. Regardless, Microsoft is heavily pushing native apps for the Arm 64 architecture via Universal Windows Platform apps (UWP). Microsoft has included Arm 64 support since Visual Studio 2017's 15.5 update, and in many cases, it's just a matter of a developer enabling the Arm platform and recompiling the app. That's not always the case, and of course apps built on the older Win32 API can't make the transition to Arm without also using an updated API, but many Microsoft apps have already made the leap, including all of the built-in Windows 10 apps.
PREV PAGE NEXT PAGE