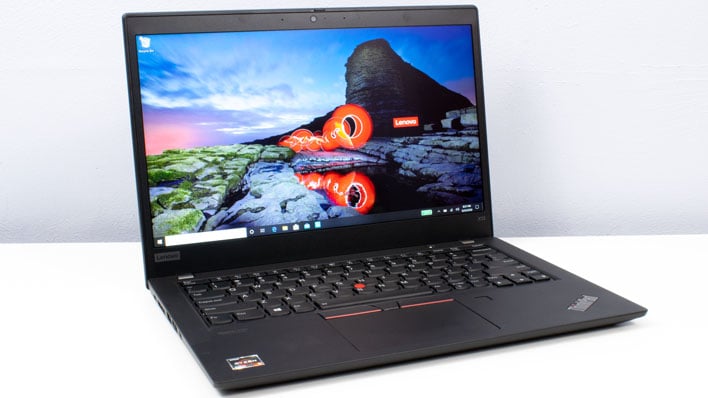 We've been looking forward to this day ever since we first got our hands on a trio of high-powered gaming notebooks powered by AMD's Ryzen 4000 processors. We already know the Renoir-based CPUs could deliver excellent performance at an attractive price in higher power envelopes where the Ryzen 7 4900HS and Ryzen 7 4800H reside. But how would AMD's lowest-power chips, like the Ryzen 5 4600U and Ryzen 7 4700U handle their constrained thermal budgets? And could AMD's typical budget-conscious pricing keep system costs low?

Lenovo's ThinkPad X13 Gen 1 notebook will answer those questions for us today. To date, the thin and light segment has been dominated by Intel's offerings. AMD seems poised to disrupt the status quo in the low thermal headroom sector, however, by equipping its CPUs with more cores and high boost clocks. AMD's integrated graphics could also be considerably faster than anything Intel has shipped to date, too.

One of a slew of design wins for the red team, the ThinkPad X13 combines Lenovo's flagship sleek lines, dark color schemes, and trademark excellent keyboards with AMD's new 15W Radeon Pro 4000 series of CPUs. These notebooks have potential to combine lots of CPU and graphics grunt with a very thin and light platform that should provide lots of power on the go. Before we talk much more, let's meet the Lenovo ThinkPad X13 Gen 1... 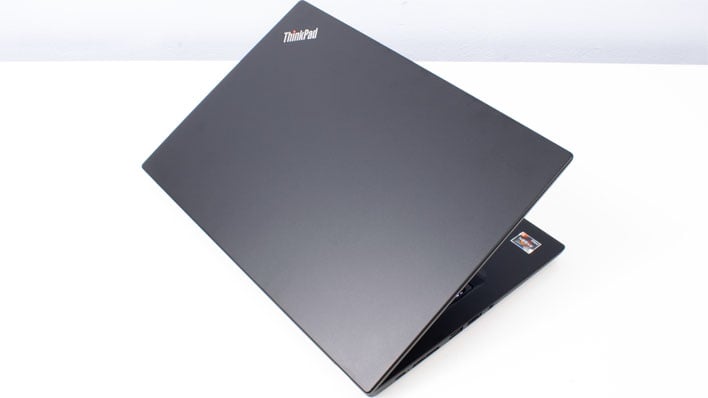 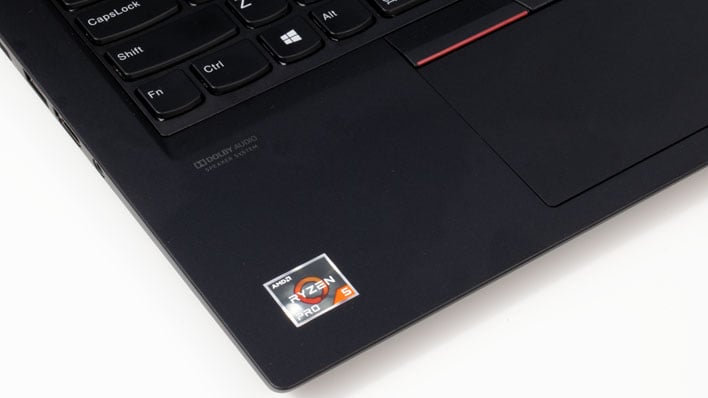 The ThinkPad X13 we have on hand today has an AMD Ryzen Pro 4650U processor with integrated Radeon graphics. This six-core CPU has symmetric multi-threading for a total of 12 hardware threads, a 2.1 GHz base clock speed, and a maximum boost speed of 4 GHz. There's 8 MB of L3 cache along for the ride as well. Other CPU options include the rest of the Ryzen Pro lineup, from the quad-core Ryzen 3 4450U to the eight-way Ryzen 7 4750U. Ryzen Pro CPUs have business features like AMD's Memory Guard and hardware support for remote management through Microsoft's Endpoint Manager.

The ThinkPad X13's 8 GB of DDR4-3200 memory is soldered to the motherboard. This is a necessary change from the bulkier gaming notebooks we reviewed earlier, so the system could be as thin as possible. That's pretty common in this range, and we bring it up so buyers will be aware they should order as much memory as possible up front. That 8 GB is adequate for most tasks, but some power users (and us, too!) would probably want to upgrade to a 16 GB or 32 GB option. A 256 GB M.2 NVMe SSD handles primary storage duties, and configuration options range from 128 GB to a full terabyte. 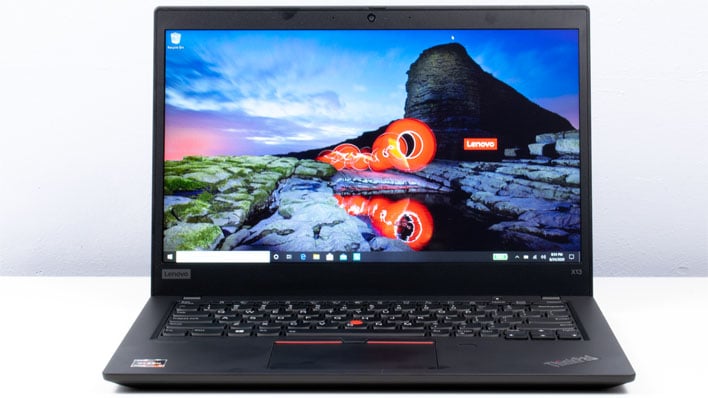 Our AMD-based ThinkPad has plenty of connectivity for wireless networking thanks to Intel's Wi-Fi and Bluetooth chip. This system can handle 802.11ax Wi-Fi networks and has support for Bluetooth 5.1. Our review system also has a SIM tray, and it's ready to accept a 4G SIM card, but this is an add-on option, not standard. Wired Ethernet users will have to rely on a USB Ethernet card, though, as the system has no Gigabit Ethernet controller.

Under the hood, this system has a 48 Watt-hour battery. That's pretty close to normal for PCs in this size and weight class. We're eager to get the battery tests rolling to see how Lenovo and AMD's latest stacks up to other thin and light notebooks. We don't expect battery for days like the Qualcomm Snapdragon 8cx systems we've tested lately, but we do hope that it'll make it through a long flight. We haven't tested a 15W Renoir system's battery life yet, so we'll see if it can meet our hopes and expectations.

On the outside, the ThinkPad X13 is just that: a ThinkPad, starting with its aluminum and magnesium body. The system is rather diminutive in its dimensions and has a soft, black finish. This notebook uses a traditional laptop form factor, so there's no 360 degree hinge here. The hinge does open to a full 180 degrees, however, so it can lay completely flat. Like all of the recent ThinkPads we've had come through our offices, the red dot in the logo on the lid lights up when the system is on, and softly breathes when the X13 is asleep.

When we open the system, we can see that the 13" 1920x1080 display has relatively thin bezels, which contributes to the system's overall small footprint. The top holds the 720p webcam, which can optionally include an infrared sensor for Windows Hello facial recognition. The fingerprint sensor below the keyboard is standard, however, so biometric authentication fans can log into the system that way if they prefer. As far as image quality goes, the camera does fine on web calls, but it won't win any awards for cinematography. Unfortunately there's no hardware shutter on our review unit's camera like there is on some other ThinkPad models, but buyers who upgrade to the infrared camera will get one. 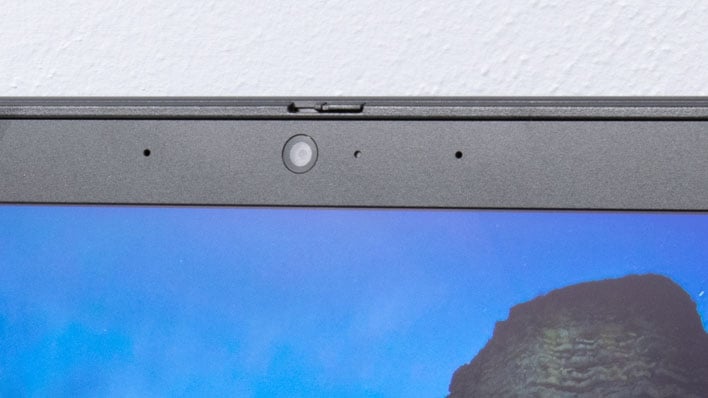 That 1080p touch-enabled IPS display in our review unit has a maximum brightness of 300 nits. Lenovo does have a brighter 500-nit option if necessary, and that upgrade also includes Privacy Guard to keep nosy neighbors from snooping the screen. Since this machine is a clamshell notebook, the touch option doesn't feel very useful, but having the option is great for users who want it. More useful is the subtle matte anti-reflective finish, which prevents backlights and objects behind us from overpowering the image on the screen.

For audio, the ThinkPad X13 Gen 1 has Dolby-certified speakers. These speakers fire downward, using the table or desk as a reflective surface. That gives plenty of volume, but it does emphasize midrange frequencies. Still, voices were clear and we had no problems understanding anybody. There's enough volume here to clearly hear everyone on a Zoom call or Skype session, but like every other laptop we've reviewed, they lack low-end punch. For users who need better audio quality, there's a four-pole headset jack for plugging in headphones or an analog headset. The dual-field noise canceling microphone array does a nice job of isolating voices. Everyone in our test Skype session could hear us with no problems. 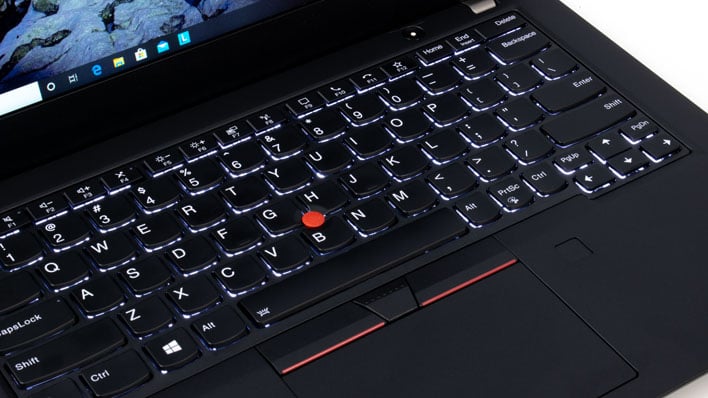 Keyboards can make or break a notebook, and Lenovo's ThinkPad keyboards in particular are usually excellent. Fortunately that continues to be the case here, and typing on the ThinkPad X13 Gen 1 is a great experience. There's a surprising amount of key travel, and a very satisfying response on each key. These keyboards get a good workout during the review period, as we produce our reviews on the test system, so we know they're as good as the first impression. Like other ThinkPads, there's a white backlight with two brightness settings built into this keyboard, something we really like in darker rooms and on planes.

Another instance of the status quo is the inclusion of the ThinkPad's Track Point pencil eraser style mouse pointer in the center of the keyboard. This thing has legions of fans, and for good reason. Once you get used to it, the Track Point is definitely sufficient if there's no mouse handy. Below the keyboard is the traditional track pad, and it does a nice enough job as well. The track pad supports all of Windows 10's navigation gestures, and has two discrete buttons at the top. 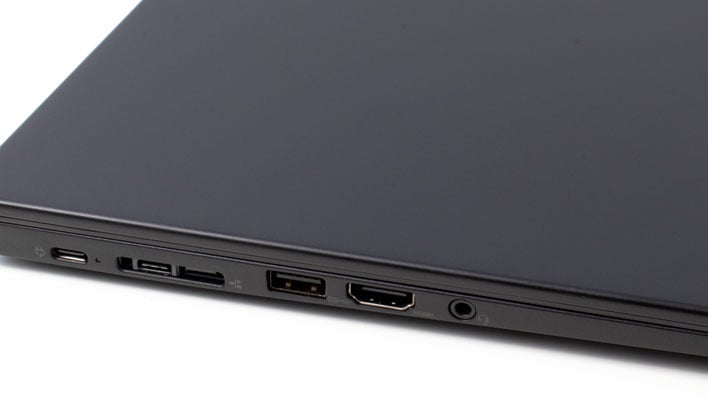 Since the ThinkPad X13 Gen 1 is a very lightweight notebook, the port array is similarly limited. On the left, we have a pair of USB 3.1 Gen 2 ports Type-C ports. The second of those USB-C ports is part of Lenovo's proprietary dock connector, and either one of them can be used with the included 65W charger to power the system. Those ports don't support Thunderbolt 3, but they do support DisplayPort alternate mode, so the only thing the ThinkPad X13 is really missing out on is an external GPU. There's also a USB 3.1 Gen 1 Type-A port, an HDMI 2.0 connector, and the previously mentioned four-pole headphone connector. Around the right is one more USB 3.1 Gen 1 Type-A port, a Kensington-style lock connector, and the exhaust vent.

We love notebooks that don't come bogged down with tons of unnecessary software. We were pleased to see that this is the case with the Thinkpad X13 Gen 1. In fact, when we opened the Control Panel to see what apps came preinstalled, the only entries were Lenovo's Vantage system management software and Microsoft 365 trial. Our review unit was pre-loaded with Windows 10 Home's 2004 update, which is the latest available as of the time of this review. 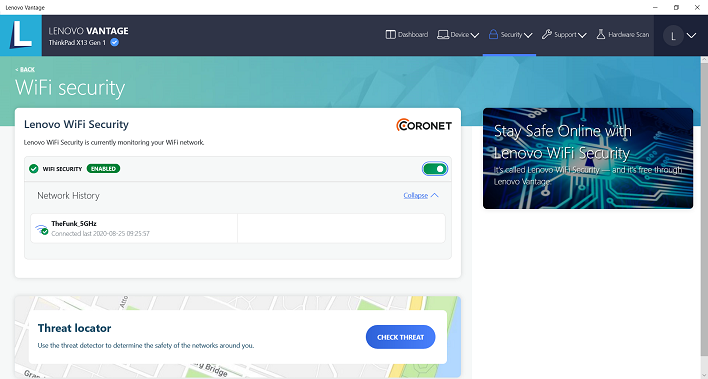 Lenovo Vantage is a one-stop utility for system management and software upgrades. Here we can completely disable the built-in microphone and webcam, search for software updates, check the system's running status, and scan for problematic hardware. We can also look at the exact hardware configuration of our system and configure Wi-Fi security. We appreciate Lenovo's single landing point approach with Vantage, rather than digging through a large number of utilities, hoping to find the right one.

That's it. That's all the pre-installed software that Lenovo puts on the ThinkPad X13. We like it when this section is short, because it means the system is as close to bare Windows 10 as possible. Now that we've gotten to know this system, let's put it through its paces on the performance side...
NEXT PAGE