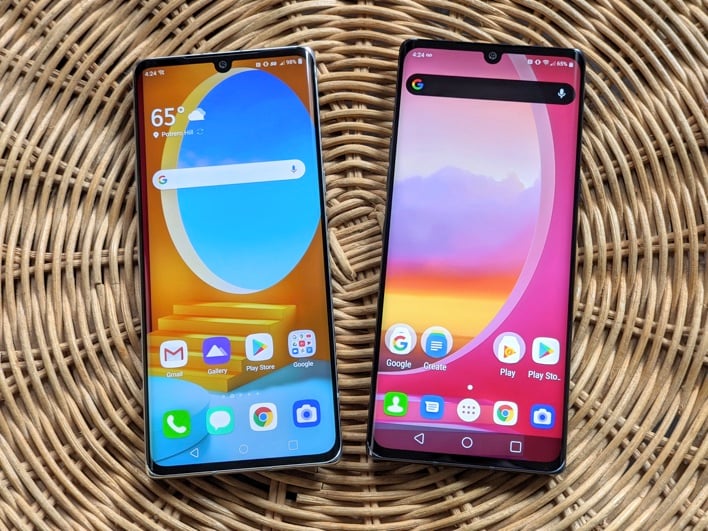 It’s been a rough few years for LG. The company has experienced steadily diminishing phone sales and market share as of late. Yet not too long ago, it was hot on the heels of fellow Korean giant Samsung. Over the last decade, LG even brought us many features and innovations we take for granted today, like the first QuadHD screen (LG G3 - 2014), the first ultrawide camera (LG G5 - 2016), and the first 18:9 aspect ratio display (LG G6 - 2017).

The G6, and the LG V30 that followed later that year, established LG’s fresh (at the time) new aluminum and glass sandwich design, which is still evident in the company’s latest flagship, the V60 ThinQ 5G. Unfortunately, this look -- not to mention its odd ThinQ branding -- didn’t age well. So LG went back to the drawing board and recently launched the LG Velvet ($600), a sleek, premium, and affordable new 5G phone.

While this new design isn’t radical, it’s modern, elegant, and -- most importantly -- brings LG back into the game. But without a Snapdragon 865 or a telephoto camera, this isn’t really the innovative flagship we were hoping for. Sure, it offers an optional dual screen case, but with handsets like the OnePlus Nord and Moto Edge coming to market, the Velvet is entering a highly competitive value-minded segment. And currently, this phone is also a carrier exclusive in the US.

So what’s the deal with the Velvet? Is it form over function? What corners did LG cut, if any? Is it worth $600 (from carriers only)? Let’s answer these questions and more in our LG Velvet review.

LG made a big fuss about the Velvet’s new design, and built up buzz over several weeks. When it finally launched, the company revealed a contemporary and attractive phone, but nothing revolutionary. The Velvet looks minimalistic and feels premium. It’s refined but understated, and puts LG back on an equal footing with the competition. We like this new design but it’s not something most people are going to lust after.

The Velvet is a large glass and aluminum sandwich with vertically aligned "raindrop” cameras and a “3D arc design” -- LG speak for curved sides front and back. It’s available in Aurora Gray, Aurora Silver, Aurora Red, and Pink White here in the US, with other colors like Aurora Green and New Black also available abroad. LG sent us two review units: a silver AT&T-branded model and a gray unlocked European device with identical specs. 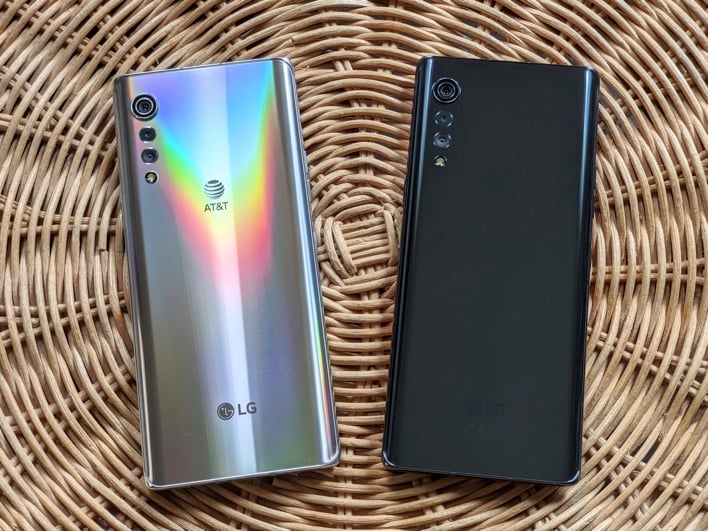 In front, the 6.8-inch 1080p P-OLED screen has slightly curved edges and a teardrop notch, with small bezels, rounded corners, and a minimal chin / forehead. We’re not fans of “waterfall” displays, but thankfully, it’s minor here. What seems more out of place for a premium handset in 2020 is that teardrop notch, which is home to the 16MP selfie camera. The earpiece lives in a slit above the screen, and is the first half of the stereo speaker pair.

Around the back are three individual shooters and an LED flash, arranged vertically in the top left corner, like falling raindrops. The topmost circle (48MP main camera) is larger and protrudes slightly, while the middle two circles (8MP ultrawide lens and 5MP depth sensor) are flush with the glass surface, and the bottom circle is smaller and contains the flash. LG’s logo rounds things out, along with AT&T’s tacky branding on the US version. 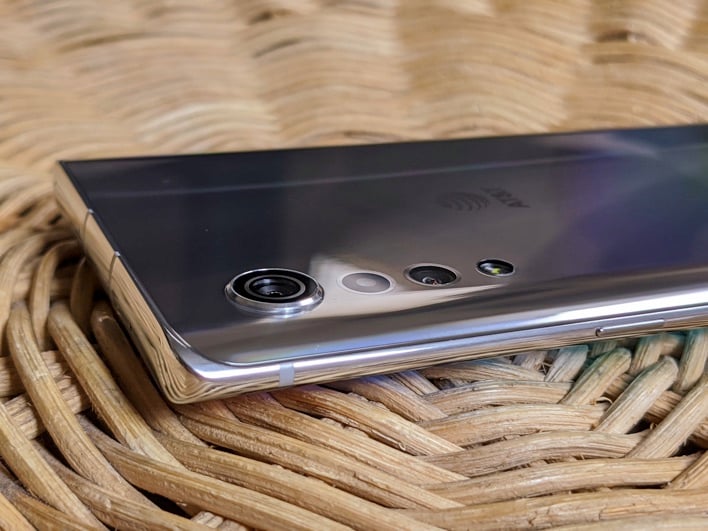 Looking around the Velvet’s frame, you’ll find the power / lock key on the right, plus a volume rocker and Google Assistant button on the left. On the bottom, there’s a headphone jack, USB Type-C port, primary mic, and speaker (the second half of the stereo pair). The top is where the secondary mic and SIM / microSD tray are located. Other than the handy assistant key (which is slightly convex, by the way), there are no surprises here.

Overall dimensions (167.2 x 74.1 x 7.9mm) are slightly smaller than LG’s V60 flagship. It’s 1mm thinner, and it’s lighter, too (180g). This means the Velvet packs a smaller 4300mAh battery (vs. 5000mAh). However, LG kept wireless charging on the menu, which we appreciate. The Velvet is also IP68-rated for water and dust resistance, and MIL-STD-810G compliant. Regardless, it’s not to be mistaken for a rugged handset. Glass still breaks, though this device may be tougher than some.


How about an unboxing video before we continue?

The Velvet features a large 6.8-inch FHD+ (2460 x 1080 pixels, 395ppi, HDR10+) P-OLED display with a 20.5:9 aspect ratio. While similar phones in this price range (Moto Edge, OnePlus Nord) boast a 90Hz panel, the Velvet is stuck at 60Hz. It’s also a curved screen with “waterfall” edges and the related drawbacks (optical distortion and occasional phantom touches). At least it’s a nice display, with punchy colors, inky blacks, and good viewing angles. If nothing else, LG is known for high quality OLED screens. 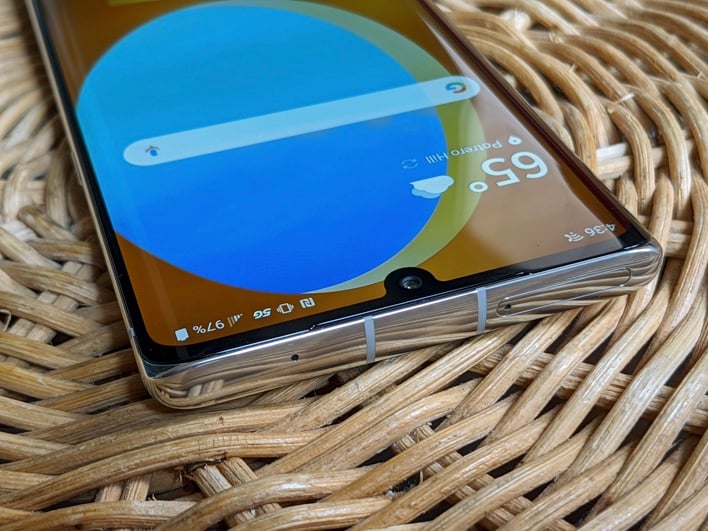 LG has kept the sides thin, with slightly wider (but almost symmetric) top and bottom bezels. As we already mentioned, the teardrop notch for the front shooter feels dated when other handsets in this segment have all but switched to punch holes -- but there’s a reason for this, as you’ll find out in the next section. We didn’t have any trouble with direct sunlight, but the auto-brightness often dims the screen too much in low light.

Like with LG’s V60, one of the Velvet’s standout features (according to LG anyway) is the dual screen case. It’s optional this time around, instead of being bundled. And honestly, it’s probably better that way. See, everything we disliked about using the dual screen case with the V60 still applies to the Velvet -- the good, the bad, and the ugly. So we suggest you read our V60 review and come right back. Go ahead, we’ll wait.

The only major differences between the Velvet dual screen case and the V60’s are cosmetic. It’s thinner, and made of a quality gray or white hard plastic (instead of a black soft-touch finish). Unlike the V60’s case, which has a full glass front cover, the Velvet’s case front cover is plastic with a glass band covering the 2-inch monochrome OLED display. Everything else is pretty much the same, just slimmed down. 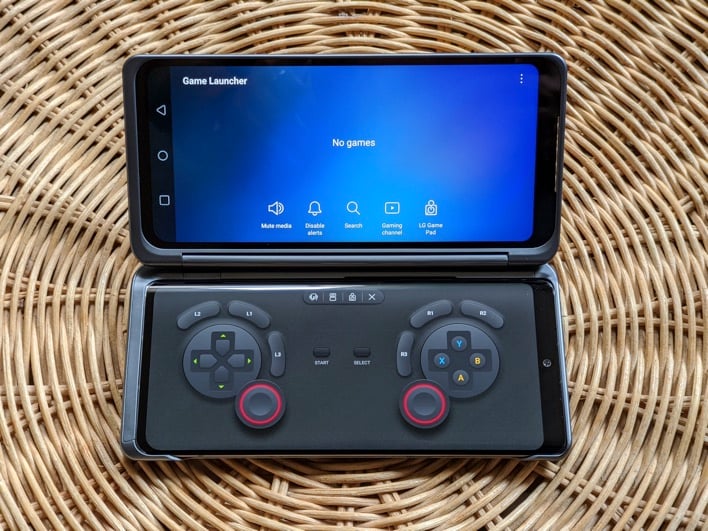 Another strange difference is that the second 6.8-inch 1080p OLED display inside the Velvet’s case -- while identical in size, resolution, refresh rate, aspect ratio and color calibration -- lacks the phone’s curved edges. It’s completely flat, yet it replicates the Velvet’s teardrop notch. We’re not sure why LG carried over the teardrop notch but not the “waterfall” display. The inconsistency is jarring.

In all, we still feel this dual screen case is a gimmick -- although we realize that's subjective. The biggest issue we have with it, other than the bulk, is that LG didn’t spend enough time developing the software to make using this case a worthwhile experience. Microsoft, on the other hand, really seems to have considered the software for its upcoming Surface Duo. And while we’ll have to review the Duo to give you our verdict, it already looks like a much better experience and implementation.