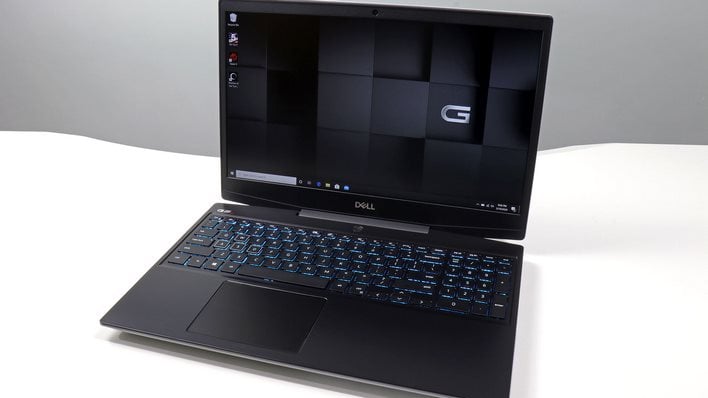 AMD is in an enviable position in the gaming laptop world. Not only does the red team arguably produce some of the fastest mainstream mobile CPUs around in its Ryzen 4000 series, there's also formidable graphics horsepower in the same camp. As a result, AMD can control the whole platform, hardware and driver stack in a PC with its CPU, GPU, and accompanying chipset, if a manufacturer chooses to use those components.

The first of these gaming laptops to hit the lab with an all-AMD bent comes from Dell. The G5 15 SE launches today with a feature set, performance target, and price point that makes for a very attractive solution for gamers on the go. Because of its single-vendor hardware configuration, the G5 15 SE is the first host platform for AMD's SmartShift power management technology. SmartShift automatically splits the power budget between the CPU and GPU in a notebook, for the best performance for a given task, and we'll definitely dig into that later.

The first gaming laptop with an AMD Ryzen 4000 CPU was the ASUS Zephyrus G14. We enjoyed that laptop, for sure, and it propelled AMD into a much stronger position in the mobile market. That machine fit into a pretty thin and light 14" form factor that only weighed around three pounds, but carries a premium price tag approaching $1,500. The G5 15 SE, by contrast, comes in a larger 15.6" form factor and offers more affordable pricing. Without further ado, our video review is below, and then we'll check out the system specs in deep dive detail... 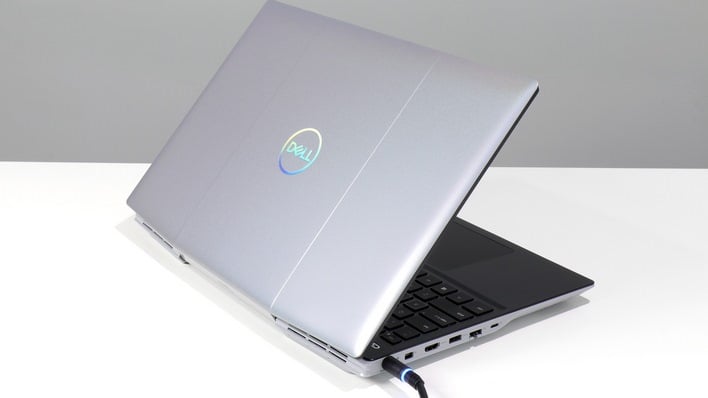 Obviously, as an AMD showcase, CPU options include Ryzen 5, Ryzen 7, and Ryzen 9 mobile CPUs. Our review unit came with the middle child Ryzen 7 4800H, which has the same eight cores, 16 threads, and 8 MB of L3 cache as the faster Ryzen 9 4900H. The difference is that the 4800H gives up a mere 200 MHz of maximum boost clock to its faster sibling. The base clock speed is 2.9 GHz and maximum turbo hits 4.2 GHz, which is still pretty dang fast.

The Ryzen processor inside the G5 15 SE is backed by 8 GB or 16 GB of RAM, and our test configuration has the larger amount. This is plain old DDR4-3200 SO-DIMMs in dual-channel mode. Dell says the G5 can be upgraded to 32 GB of memory separately. Because the RAM is user-replaceable, it's possible to get the bare minimum from Dell and upgrade it later, though buying 16 GB is a pretty solid start without any tinkering. A pair of M.2 slots provide storage options in the G5 15 SE. Our test unit came with a single 512 GB M.2 drive with the second slot available and waiting for another drive.

In any gaming notebook, the star is the graphics processor. In this all-AMD system, that happens to be the Radeon RX 5600M. This GPU has 2,304 stream processors across 36 compute units and a 192-bit bus for 6 GB of GDDR6 memory. That's actually the same number of CUs as the bigger RX 5700M, but only 75% of the available VRAM and bandwidth. Compared to the desktop RX 5600 XT, that's the same number of CUs and amount of VRAM as the desktop counterpart. It should be pretty potent when gaming at 1080p. 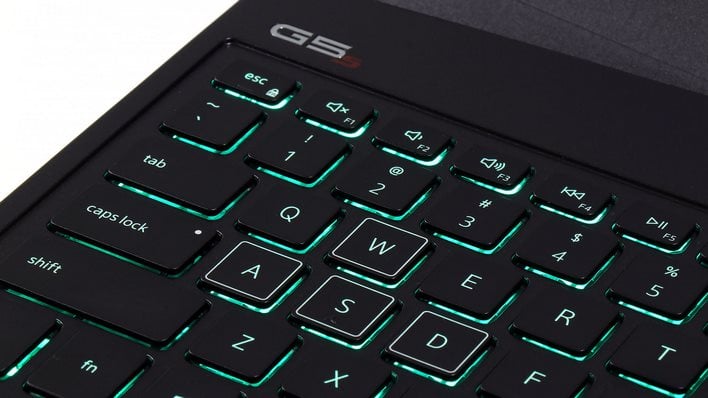 A pair of wireless networking options are available, but our unit came with the enhanced Killer Wireless 1650x. The antenna configuration is a 2x2 MIMO setup, which handles the 802.11ax Wi-Fi and Bluetooth 5.1 capabilities of the Killer networking card. There's also a fold-down Gigabit Ethernet port on the side of the unit powered by a Realtek Ethernet controller.

Battery life is more often than not an afterthought in budget gaming notebooks, but Dell still includes a standard 51 Watt-hour three-cell battery by default in the G5 15 SE. If that's not enough, an optional 68 Watt-hour battery can be substituted at the time of purchase for an additional charge. Our review unit has the bigger battery, so we'll keep that in mind when talking about battery life.

The G5 15 SE comes in a Supernova Silver finish, which has flecks of iridescent material just under the surface. As a result, the G5 sparkles a bit under the right lighting conditions, and the iridescent finish's color changes depending on the viewing angle. That look is most apparent in the Dell logo on top of the unit, but the whole lid has it. The entire body is made of polycarbonate, but only the lid has the flashy treatment. The display hinge is flanked by a pair of large output vents, and when the G5 15 SE is gaming, we could definitely feel the warmth radiating from the back. The G5 15 SE a fairly hefty unit, weighing in at 5.5 pounds, and the charger adds another 2.2 pounds to the travel weight. 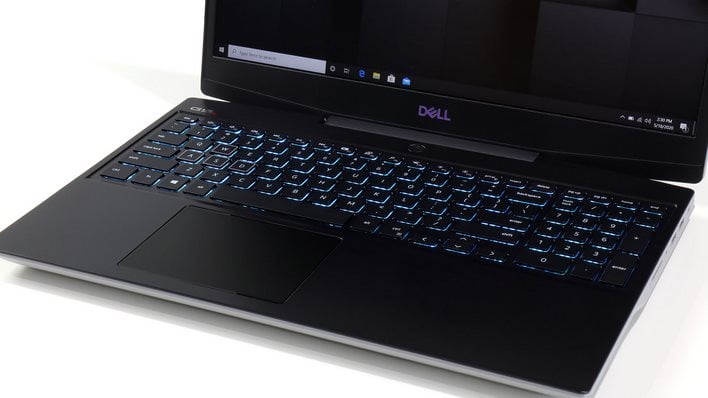 The rest of the G5 is silver with a black palm rest. Inside that palm rest we find a keyboard complete with a ten-key number pad on the right. The keyboard has a four-zone RGB backlight that work with Alienware Command Center. There's an adequate amount of travel, and typing is comfortable, and gamers will probably appreciate that the WASD block has an outline, but they don't feel any different from the other keys. Below the keyboard is a modestly-sized touch pad with integrated buttons. The touch pad is fine for navigating in Windows, but we would definitely choose an external mouse for gaming.

Above the keyboard is the 15.6" 1920x1080 display panel. This is a high refresh rate unit that maxes out at 144 Hz. Having such a high refresh display in a laptop this inexpensive is pretty rare, even if it's an optional upgrade like it is here (which is already factored into the price), so kudos to Dell for hitting a price point while simultaneously providing a nice gaming display. 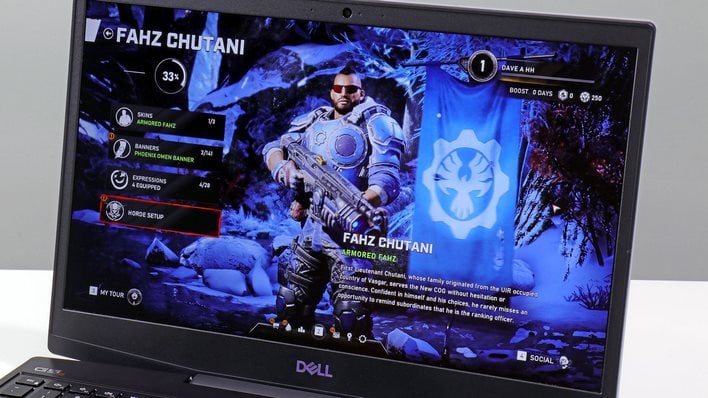 The maximum brightness rating is a relatively tame 300 nits, but we found it to be sufficient for indoor use. The top bezel of the display holds a 720p HD web cam that's plenty for the typical Skype, Zoom, or Google Meet session. There's also a multi-microphone noise canceling array for input and stereo speakers with Nahimic 3D audio. The speakers put out plenty of sound heavy in mid-range and highs, but lacking in bass, which is typical of the small drivers found in a notebook. There's a four-pole headset jack for folks who value audio quality, so the speaker situation is fine. 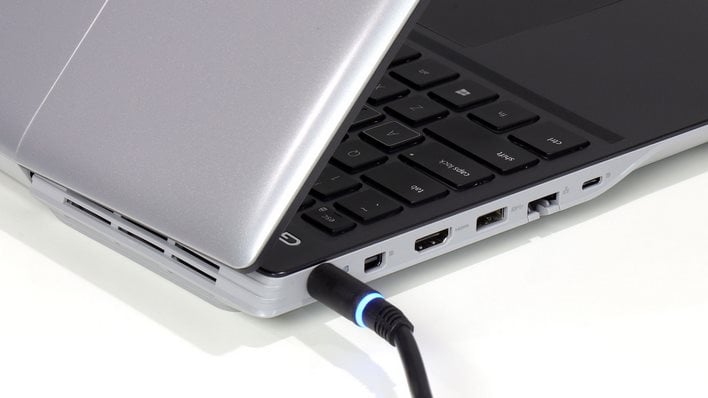 A wide variety of ports flank both sides of the G5. On the left, we can find all sorts of ports. There's one each of Super Speed USB 3.2 Gen 1 port, HDMI 2.0, mini DisplayPort, Ethernet, charger input, and a USB Type-C connector. That USB Type-C connection only carries DisplayPort Alternate Mode video signals, not data. We do like the inclusion of a Type-A port, since so many brand new peripherals even today only come with the older form factor. Wired Ethernet is a good choice for online gaming, too.

The USB-C port also threw us for a loop since my portable hard drive with our test installers has a USB-C cable and didn't power up. A quick review of the spec sheet and a cable swap later and all was good. This is really unfortunate since there are so many USB 3 docks that use USB Type-C ports. Obviously this wouldn't work for power delivery on a thirsty gaming laptop since that only supports up to 100W. Still, adding a bunch of ports, including full-size DisplayPort, USB 3.0 Type-A, and extra audio options, would have been quite nice. 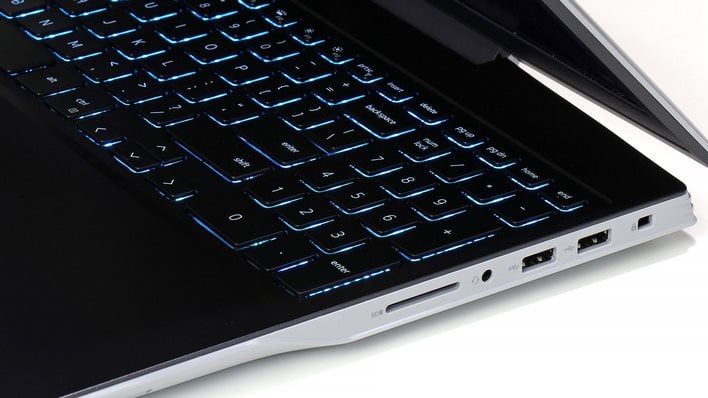 Around the right side we find a pair of USB 3.0 ports, a full-sized SD reader, and the headset jack. The full-sized SD card reader is handy, since micro SD cards usually come with a full-sized adapter, where the larger cards won't magically shrink to fit a micro SD reader.

AMD announced SmartShift along with the Ryzen 4000 family at CES in January. SmartShift dynamically splits up the thermal and power budget to give more oomph to the component that needs it, depending on a given task. Normally, the CPU and GPU consume electricity from separate power budgets. SmartShift can pool those separate resources into a single power budget for both components.

In the case of the G5 15 SE, this is important for gaming. More often than not, performance bottlenecks are caused by the graphics processor pumping out frames as fast as it can. In that situation, the CPU doesn't have to work as hard to present frames to the GPU and therefore isn't consuming its entire budget. SmartShift gives those extra watts to the GPU so that it can work harder and generate more heat to be dissipated by the PC's cooling system. 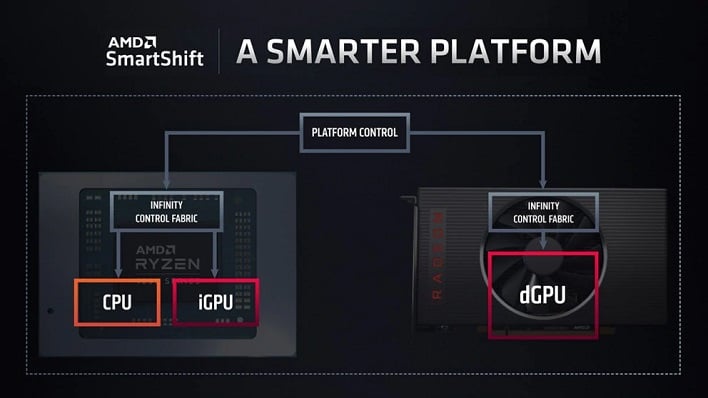 This can also work in reverse if the GPU is idle while the CPU pumps away at a big encoding job or other heavy task. Some of the GPU's power budget can be given to the CPU to keep boost clocks high and get the job done more quickly. Because the drivers and firmware for both pieces of this puzzle know what the other is doing, that enables the system to use more power just on one side or the other (never to exceed the total power budget) to provide better performance.

The great thing is that this is all automatic, but it requires an all-AMD setup. AMD's hardware components can talk to each other over the Infinity Fabric controllers found in Navi GPUs and Ryzen 4000 CPUs. That means it wasn't available to the ASUS Zephyrus G14, because that has an NVIDIA GeForce RTX 2060 Max-Q along with its Ryzen 9 4900HS. That's not necessarily bad, of course; performance on the G14 was great. However, using a Radeon GPU with a Ryzen processor gives a full-AMD implementation the advantage of maximizing performance when possible.

Dell took the "shift" idea a step farther with Game Shift. The F7 key on the keyboard also functions as a Game Shift toggle when pressed with the Fn key. Dell's Game Shift cranks up the fans to their maximum settings without leaving a game. This enables what Dell calls a "dynamic performance" mode that will let the CPU and GPU work harder, and should have a measurable impact on frame rates. We'll be testing this out for sure.

The software experience on the G5 is pretty standard for Windows 10. However, Dell includes a handful of apps that should come in handy, and that starts with system utilities. Alienware Command Center is present on the G5 15 SE to provide control over power, thermal, and cooling control. Command Center can control Game Shift with the click of a button. The RGB LED-backlit keyboard configuration and other thermal and cooling controls are here, too. 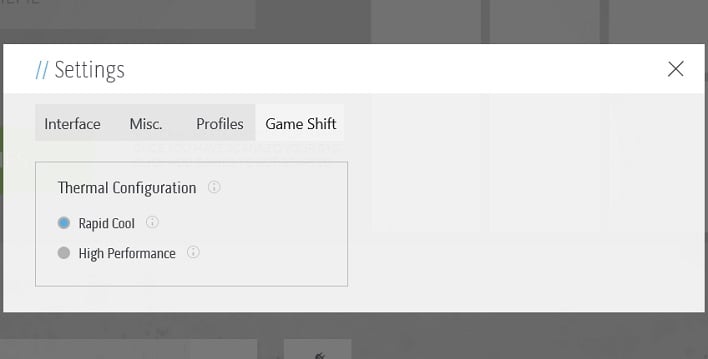 
Alienware Command Center's Game Shift settings has a pair of configurations: Rapid Cool and High Performance. Selecting High Performance here merely applies the High Performance power profile by pressing the Game Shift hotkey. On the other hand, Rapid Cool cranks the fans up to 100% and tweaks the CPU speed further. This is the mode we tested since it seemed to have the most dramatic impact. Folks who have a real need for speed can play with the OC tools, too.

Beyond just system control, Dell included several other apps on the G5 15 SE. Dell Mobile Connect interfaces with iOS and Android phones for text messaging, notifications, phone calls, and screen mirroring. It's a really handy app that we've covered in-depth previously in the 2020 XPS 13 review, and everything from that applies. The G5 15 SE also includes its Support Assist software as a direct line to Dell support and a one-year subscription to Dropbox with 20 GB of space.

We know how the G5 15 SE looks and feels, so let's find out how it performs next.
NEXT PAGE