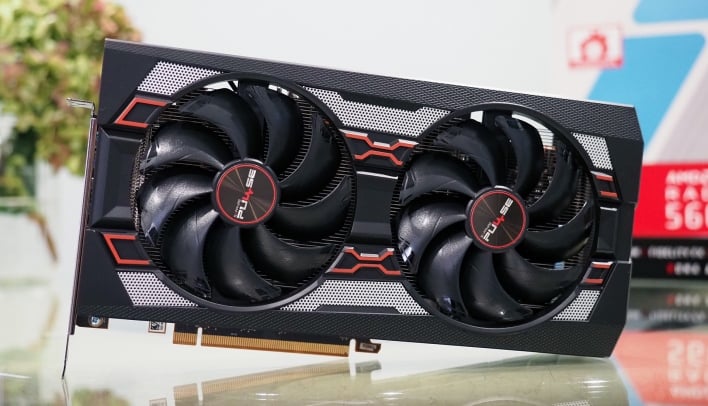 After numerous leaks, AMD officially announced its Radeon RX 5600 series of GPUs during its press conference at CES 2020 a couple of weeks back. Although most of the early leaks were technically accurate at the time they hit the web, a series of events since then has changed the landscape somewhat, and what you thought would be launching today, could be a somewhat different beast.

We’ve got one of Sapphire’s Pulse Radeon RX 5600 XT cards on-hand for testing to show you all what a retail-ready version of AMD's Radeon 5600 XT from Sapphire can do relative to its competition. AMD’s announcement at CES 2020 outlined a certain set of specifications for the Radeon RX 5600 XT, which no longer apply, however. Since the Radeon RX 5600 XT’s unveiling, NVIDIA has tweaked its pricing structure to bring the GeForce RTX 2060’s price down below $300 (AMD had originally targeted the GeForce GTX 1660 Super / Ti with the Radeon RX 5600 XT). Coincidentally, in the lead-up to today’s launch, AMD’s board partners provided updated firmware for their cards that increased the their GPU and memory frequencies, tweaked fan profiles, and upped their default power targets. As you’d expect, that bumped-up the Radeon RX 5600 XT’s performance, so any specs and pre-CES performance data you may have seen are now off the mark. The change also introduces some potential problems into the channel, because early adopters may receive a cards that haven't been updates. (And since this article was launch, news has hit that some cards may not be able to support the faster memory speed at all.)

So, where does Sapphire's new Radeon RX 5600 XT fit in the current discrete GPU market? That’s what we’ll aim to answer in the pages ahead, but first, let’s get some particulars out of the way... 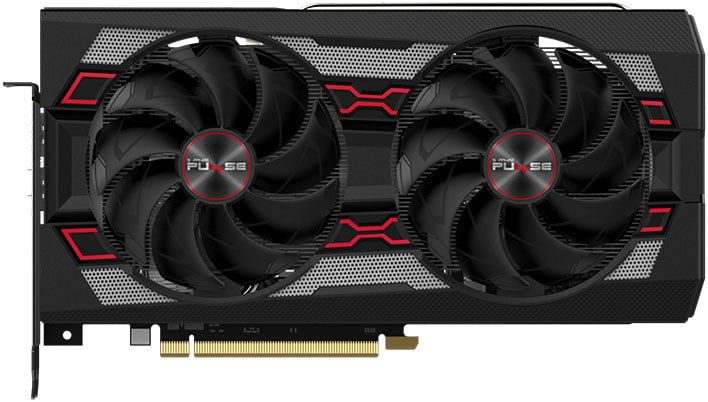 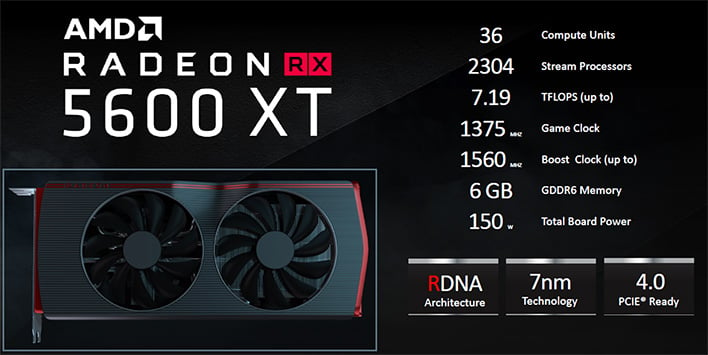 AMD Won't Be Selling It's Own Reference Design 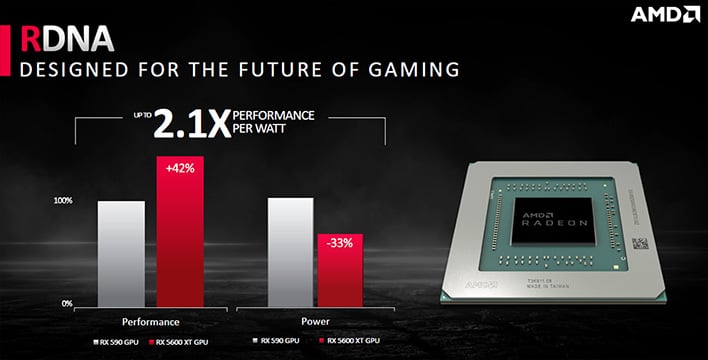 If you’d like a refresher on Navi’s main features and capabilities, we’re going to point you to a few previous articles. We’ve got the Navi GPU architecture covered here, and here’s our launch coverage of the Radeon RX 5700 XT. We should also point you to this piece highlighting the recently-released Radeon Software Adrenaline 2020 Edition suite. AMD packed a ton of new features in the latest Radeon Software release, that unleash some additional capabilities and performance in some scenarios – Radeon Boost is particularly interesting, so check out that article when you have a moment. 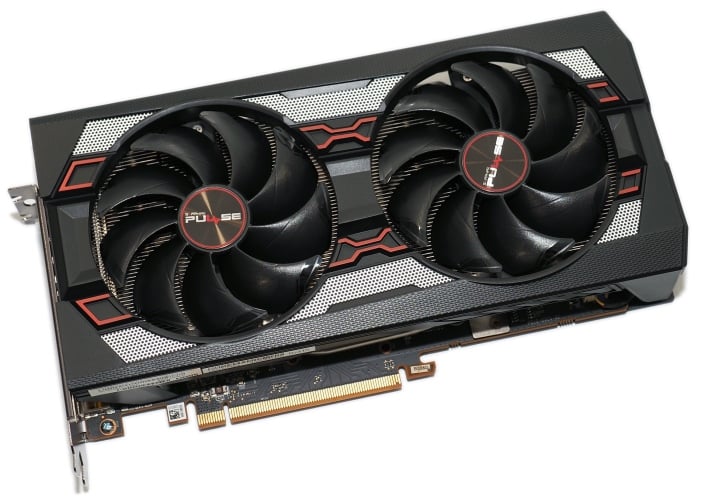 The specific Radeon RX 5600 XT we’ll be featuring here is the Sapphire Pulse Radeon RX 5600 XT. This card has a BIOS switch on-board that toggles between performance and silent / quiet modes. In performance mode, the card has a 160W power target, 14Gbps memory data rate, a Boost Clock of 1,750MHz and a Game Clock of 1,615MHz. In silent / quiet mode, things are a bit more tame. Silent mode has a 135W power target, 12Gbps memory speed, and 1,620 MHz / 1,460MHz Boost and Game Clocks, respectively. 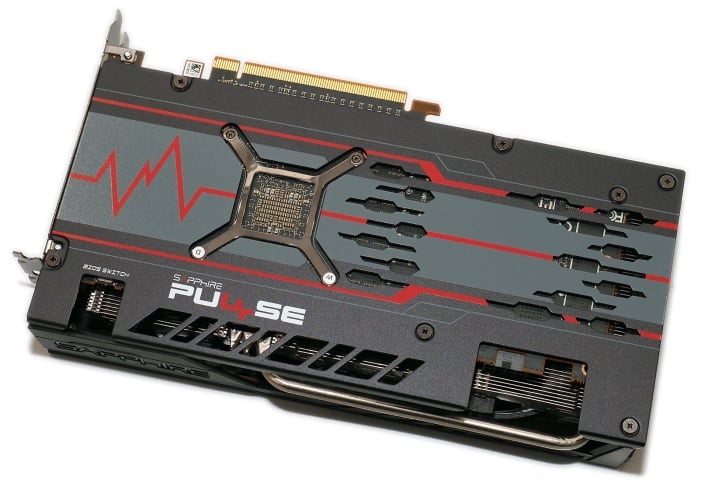 During our testing, we typically saw real-world Game clocks hovering north of 1,700MHz with our Sapphire Pulse Radeon RX 5600 XT. Its dual-axial fan cooler did a great job keeping temperatures in check too, without making much noise at all. As you’ll see a little later, after hours of benchmarking, GPU temperatures remained in the low-70’C range, at least according to the health monitoring data available in AMD’s latest drivers.

The cooler on the Sapphire Pulse Radeon RX 5600 XT features two 95mm axial fans, that sit atop a large array of heatsink fins, that run the entire length of the PCB. Three heat-pipes snake through the heatsink fins and converge directly above the GPU. An additional heat-plate makes contact with some components on the back-side of the card as well to further aid in cooling, while also adding some rigidity. 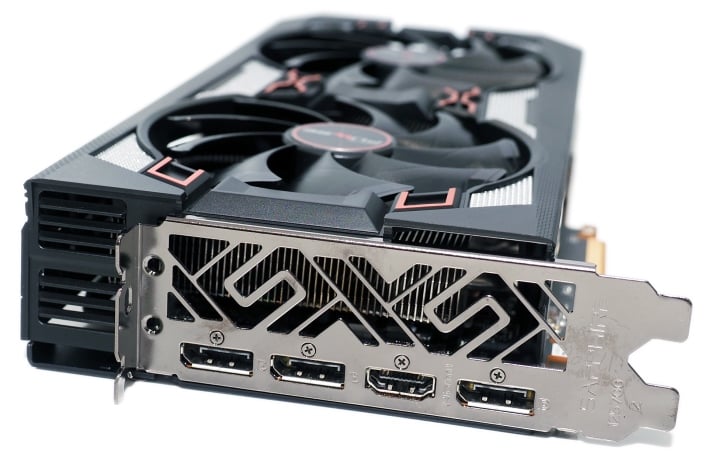 The Sapphire Pulse Radeon RX 5600 XT features a dual-BIOS setup, with a simple switch to toggle between the two, and there is a single, 8-pin power connector facing upward at the tail-end of the PCB. Note, that the PCB is about an inch and half shorter than the heatsink and fan shroud, and there is a lighted Sapphire logo at the front, of the top-end of the card.

Like the Radeon RX 5700 series cards, outputs on the Radeon RX 5600 XT consist of a trio of full-sized DisplayPorts and a single HDMI port. The rest of the case bracket is essentially just a large vent, with a couple of stylized “S”es and some funky geometric designs.

Well then, let's fire it up, shall we?
NEXT PAGE