Because the G5 15 SE is a gaming notebook first and foremost, we necessarily dedicate a lot of virtual ink to the topic in this review. Today we're going to look at some relevant 3DMark scores and then dive into several games to assess performance. To that end, the potent pairing of the Ryzen 7 4800H and Radeon RX 5600M has the potential to drive the system's 1920x1080, 144 Hz display pretty well. Let's take a look.

3DMark has several different graphics tests which focus on different types of systems. UL seems to have discontinued support for Cloud Gate, but fortunately there are a couple of tests remaining that run well on integrated graphics. First we start with Time Spy, which is 3DMark's headline benchmark. This test presents a pretty significant challenge for the system's CPU and GPU using DirectX 12's APIs... 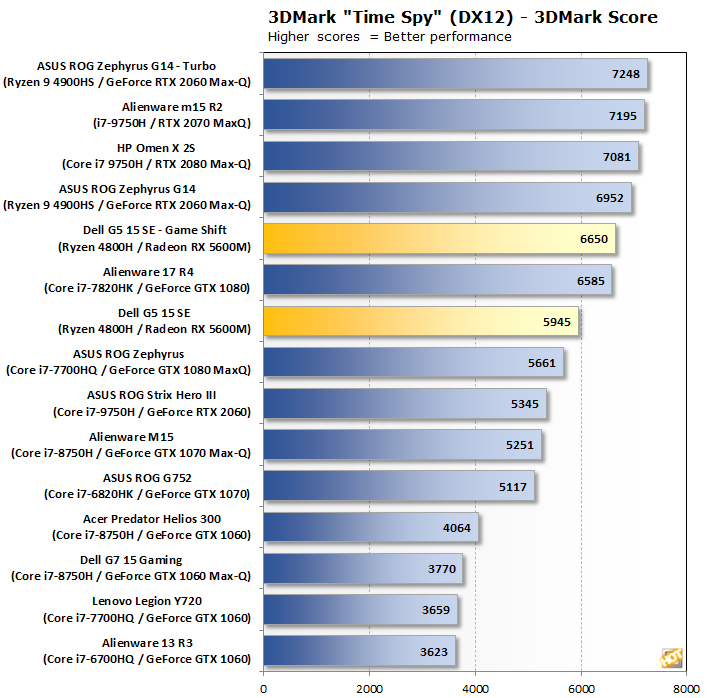 First and foremost, the improvements brought by Game Shift for free are pretty astounding. The default setting's score of nearly 6,000 for this Dell laptop is already in the top half of our test pack full of more expensive machines, but the more aggressive configuration leapfrogged a couple of prior-generation flagships and settled right next to the much more expensive ASUS machine. The value on display here is pretty remarkable.

Next up is Fire Strike, which is a showcase of DirectX 11 effects that can, under the right conditions, bring a lot of gaming PCs to their knees. We ran the test on its Extreme setting, which upscales the rendering resolution before outputting to the screen. 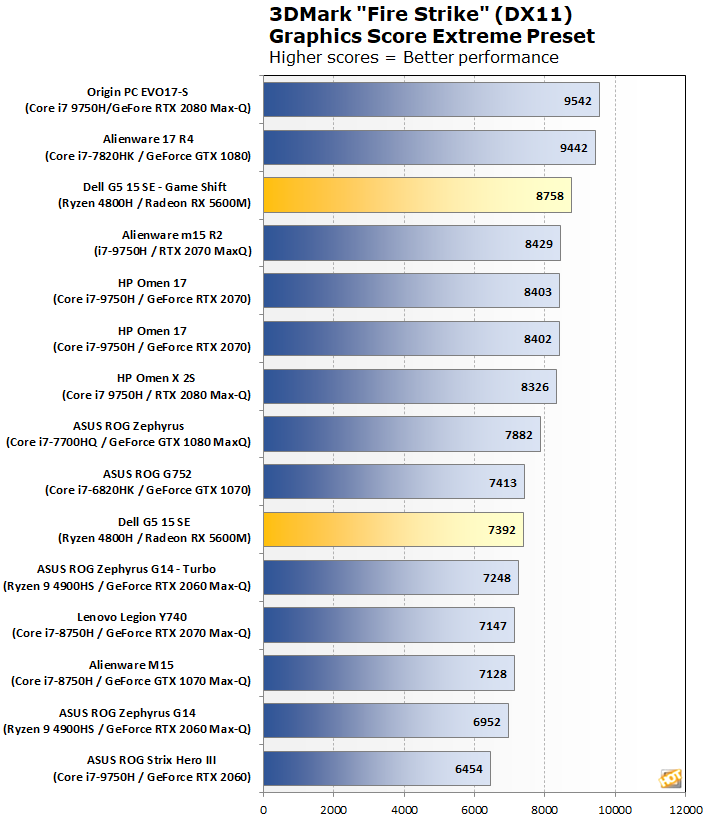 Once again, Game Shift put the G5 15 SE into overdrive as the system went from middle-of-the-pack performance to up towards the top. Even so, the standard configuration's performance wasn't anything to sneeze at, and it bested the ASUS ROG Zephyrus G14 this time around. It seems AMD's Ryzen 7 4800H and Radeon RX 5600M is a pretty potent combination.

Far Cry 5 takes the franchise to Montana with lush environments and incredible graphics fidelity. We ran the G5 15 SE through the built-in benchmarks with Ultra Quality settings.

We did run into a slight problem with this game in which it always ran on the integrated GPU no matter which was selected in the game's settings screen. We reported this problem to Dell and they had a fix quickly. This issue was easily resolved through Windows by assigning the GPU in the Display control panel, but they're working with AMD to make sure that it's not necessary going forward. It's also worth noting that Far Cry 5 is the only game we tested that had this problem. 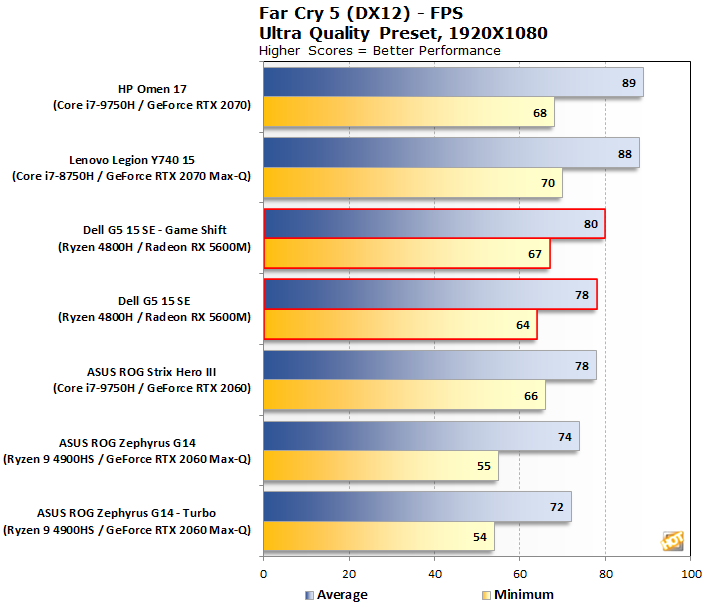 Game Shift doesn't have nearly the impact in Far Cry that it did in 3DMark, however 3DMark puts a significant strain on the processor. On the other hand, many games are console ports where the Xbox One and PlayStation 4 have pretty weak CPUs by today's standards. As a result, multi-platform games like Far Cry 5 aren't as reliant on the processor as they are the GPU, which was running pretty hard to begin with. Still, free performance is free performance, and who are we to turn that down?

Gears 5 was one of the fall blockbusters we had a chance to dig deeply into, and on top of looking great, it's a blast to play. Because of the relative newness of the game, the Alienware m15 R2 is the only other notebook on our charts for now. All the other scores are from our mid-range desktop graphics shootout, which ran on a Core i5-9600K. We used the High preset at 1920x1080, same as before, to test. 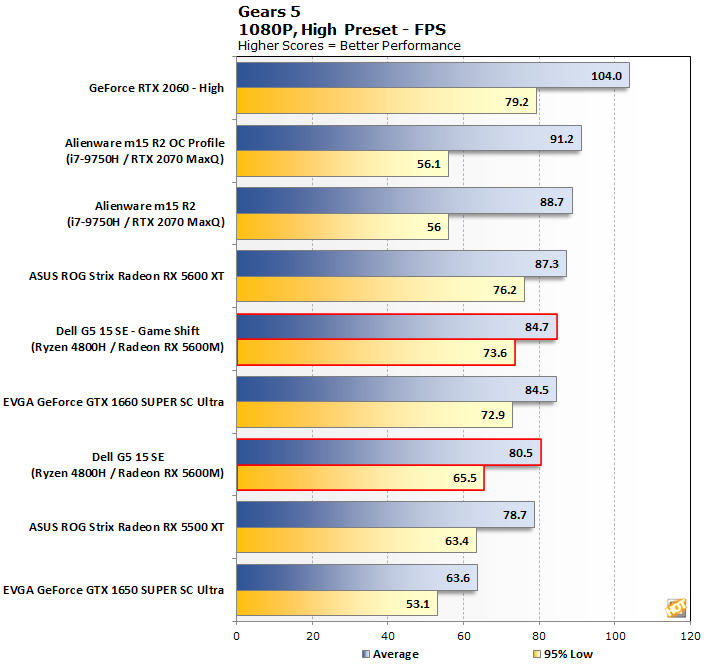 For the first time, we get to see the Radeon RX 5600M in in the G5 15 SE go head-to-head with its desktop counterpart. Since the RX 5600M has the same resource counts for both compute power and VRAM as its desktop counterpart, it's not really a surprise to find that the mobile version isn't that far behind the desktop one. The G5 15 SE trails the much more expensive Alienware notebook, but it's not by all that much. Overall, this is a great result, despite appearing towards the bottom of the chart. 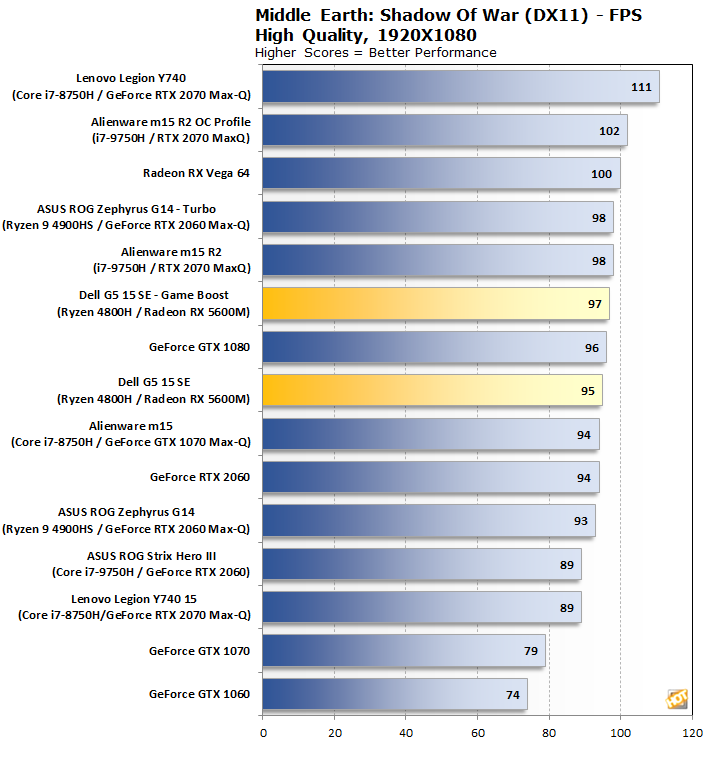 Once again we see a slight but measurable difference between Game Shift and standard modes. And once again, the G5 15 SE put up a pretty tough fight, beating out even the desktop version of the GeForce RTX 2060 in our GPU test rig. More importantly, the notebook kept up with more expensive systems from Alienware and the ever-present Zephyrus G14. It's just another example of the gaming value the G5 represents. Once again we're not maxing out the 144 Hz panel, but we don't have to.

The finale in the rebooted Tomb Raider trilogy, Shadow of the Tomb Raider is easily the best-looking of the bunch. It's also brimming with Tobii eye-tracking hardware support, and leading edge graphics technologies. To test this game out, we again turned the visuals up to High and tested at the full-HD resolution of 1920x1080. 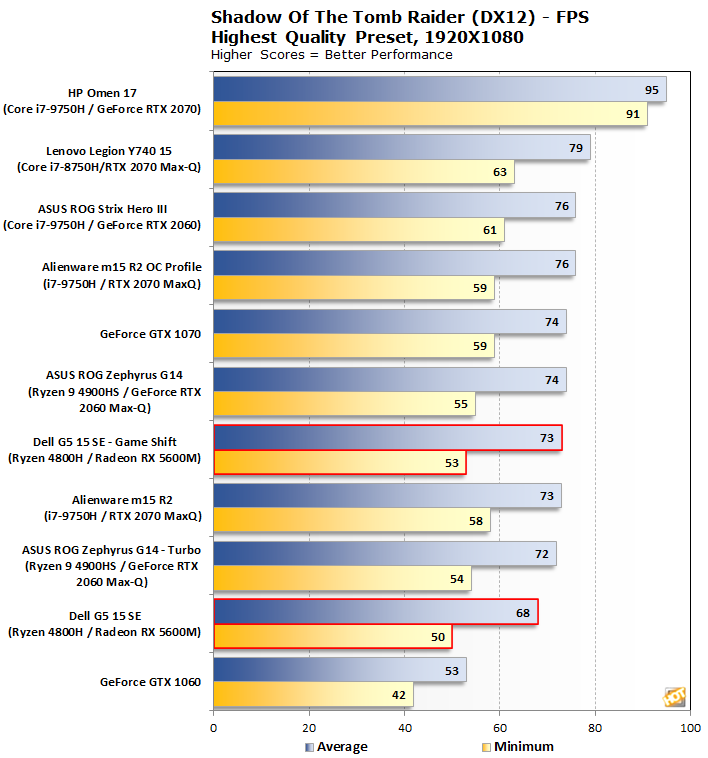 The G5 15 SE is pretty evenly matched with the ROG Zephyrus G14. The G5's standard profile couldn't beat out the Zephyrus on Turbo, and just about tied it up with the Turbo setting when the G5 was using Game Shift. Either way, the Dell system never fell below 50 fps, and the average over 70 is very comfortable to play. Overall, gaming on the G5 15 SE is a real pleasure, and Tomb Raider has been no exception.

We recently moved to PCMark's video playback test for battery life comparisons, which uses Windows 10's Movies and TVs app to play back video. Unfortunately there's not much comparison data yet. All of our other systems are ultrabooks and 2-in-1s. For that reason, we also ran our custom video playback loop test, which uses VLC. Let's take a look at each individually. For all tests, we configure the system to never sleep, only hibernate when the battery runs dry. We calibrated all screen brightness controls to as close to 115 lux as possible, turned off dimming when the battery gets low, and turned on Windows 10's Focus Assist to keep notifications from popping up. 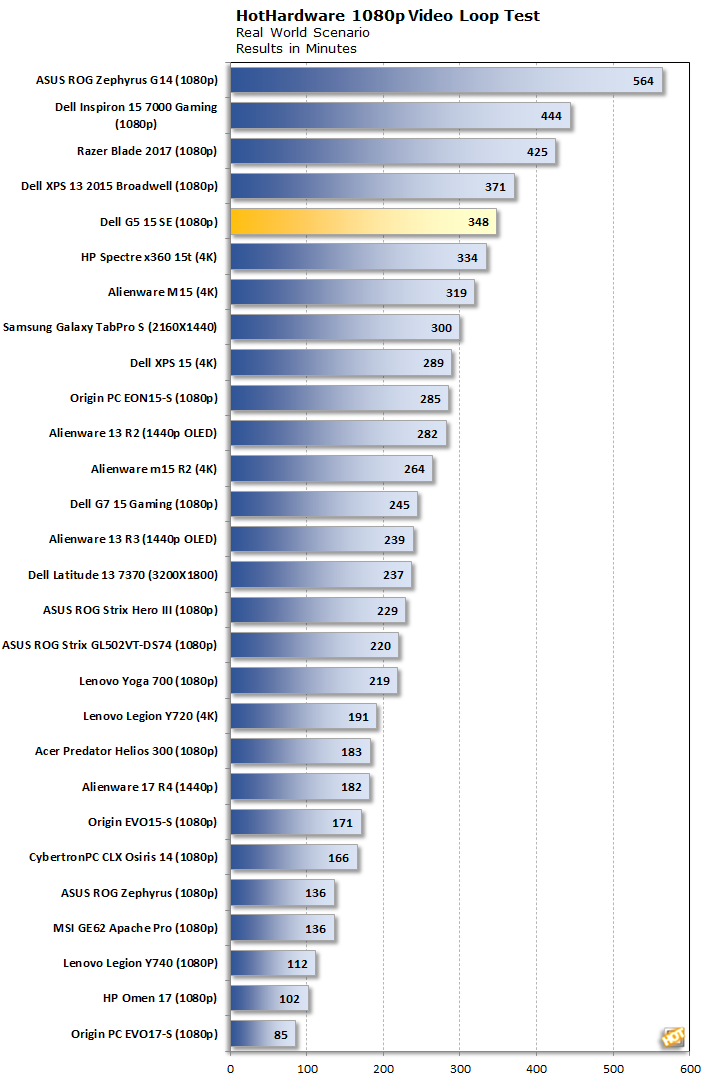 First up is the custom video playback test. The Dell G5 15 SE performs well here. The battery test relies on the integrated GPU, so that kept the Radeon RX 5600M as idle as it possibly can be. Despite all the high-powered hardware in this machine, it still crept up really close to six full hours of video playback. That's pretty great for a gaming notebook. The ASUS Zephyrus G14 lasted way longer on a single charge, though. That machine has a larger battery and a smaller display, so it should last a bit longer, but this is more like 50% longer. Still, six hours is a decent charge, so we have nothing to complain about.

PCMark's Video Playback test seems to run much longer than the VLC test we previously used. Every system here lasted an extra 50% or longer on the battery. That makes us think that VLC doesn't use the built-in video decoding hardware as optimally as it could, even though we have it configured to use hardware acceleration. Regardless of the reason, the G5 15 SE lasted over ten hours on video playback. Once again it's a pleasantly surprising duration in our test, even if it took the upgraded 68 Whr battery to do it. 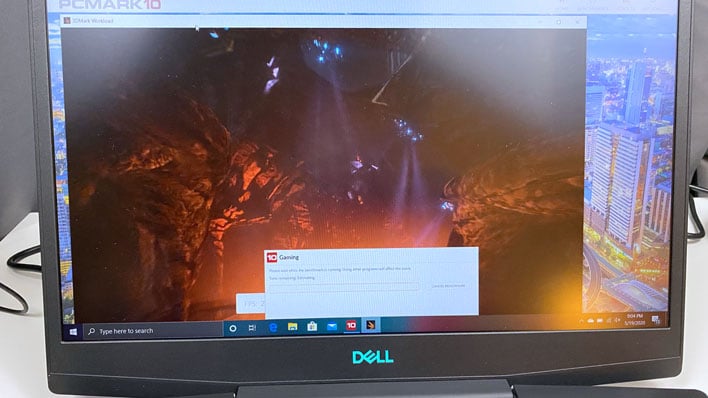 Lastly is the gaming test. PCMark's Gaming battery test runs the Flame Strike demo in a loop to simulate games. While that's more intensive than a lot of PC games out there, it's a good indicator of how long the battery will last with a heavy 3D load.

The answer, unfortunately, is "not all that long" as the G5 died in just 56 minutes with the default power plan and our usual 115 lux display brightness calibration. Trying a more battery-friendly profile didn't really help, either. Contrast that with the ASUS ROG Zephyrus G14, and the difference is stark. True, the G14 has a larger battery, but the G5 lost by more than 50%.

Two other things to consider is that the Zephyrus's smaller chassis could mean that the CPU and GPU were running at a lower ceiling, and the G5's performance does show it beat the G14 on several occasions. Don't forget that the Ryzen 9 4900HS is a 35W part according to AMD's specifications, compared to the 45W TDP of the Ryzen 7 4800H. While TDPs don't necessarily translate into power consumption, presumably the H part has a higher ceiling than the HS component in part because it uses more juice. In short, there are a lot of variables and potential causes here, so we can't just label the G5 15 SE as energy-inefficient.

Game Shift seems to not function under these conditions, as when we unplugged the system, Alienware Command Center notified us that Game Shift was disabled. That's to be expected when the laptop needs to run as long as it can on the battery. We also think that maybe gaming battery life might be a little better in the real world because Fire Strike is so demanding on the processor for physics calculations. Still, there won't any gaming marathon sessions without a wall socket nearby.

Next up let's take a look at power consumption, thermal characteristics, and noise output.
PREV PAGE NEXT PAGE