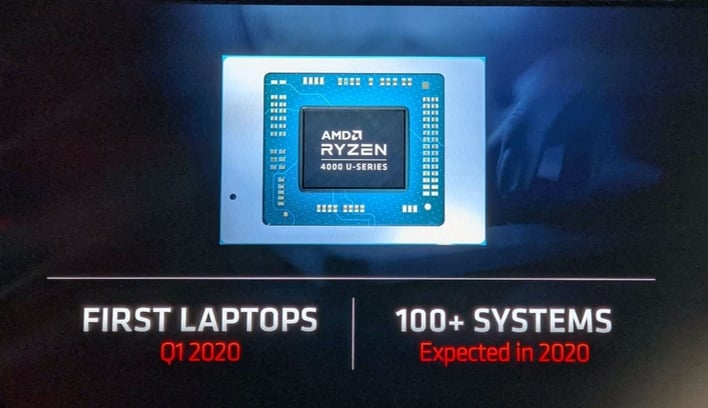 AMD announced an array of new products at its CES 2020 press conference, including its first Zen 2-based Ryzen 4000 series mobile processors and a monstrous 64-core / 128-thread third-generatoin Ryzen Threadripper. In addition to the new processors, on the graphics front the oft-leaked Radeon RX 5600 XT that target’s 1080p gamers in the sweet spot of the GPU market was also made official – you can read more about the Radeon RX 5600 XT here.

Thanks to the performance and efficiency enhancements that come by way of AMD’s Zen 2 architecture and the 7nm manufacturing process used to produce the chips, the upcoming Ryzen 4000 series mobile processors are poised to make some serious waves beginning this quarter, and throughout the year. AMD is claiming 20% lower SOC power, 2X perf-per-watt, 5X faster state switching, and significantly improved iGPU performance with the Ryzen 4000, which should give AMD a solid foundation on which to grab some serious share from Intel in the mobile market, where it has been dominant for many years. AMD is already claiming upwards of 100+ design wins that should debut through Q1 and later into the year. We have had our hands on a few machines already from partners like ASUS, Dell, and Lenovo to name a few.

The U-Series flagship, the Ryzen 7 4800U, is an 8-core / 16-thread processor with a max turbo frequency of 4.2GHz and integrated Vega-derived 8-core GPU. That is actually a lower number of GPU cores than previous-gen AMD mobile processors, but due to some architectural enhancements and the frequency benefits of producing the chips at 7nm, AMD claiming up to 59% improved performance per graphics core. AMD is also claiming superior single-thread CPU performance versus current Intel-processors and significantly better multi-threaded performance thanks to the increased core / thread counts of the Ryzen 4000 series. The initial Ryzen 4000 U-Series line-up consists of five processors, starting with the 4 core / 4 thread Ryzen 5 4300U, and topping off with the aforementioned Ryzen 7 4800U. 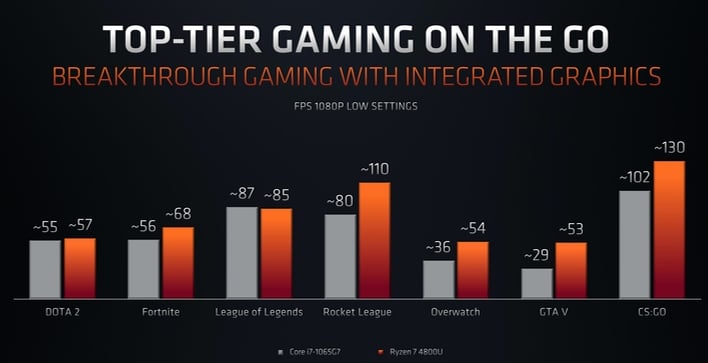 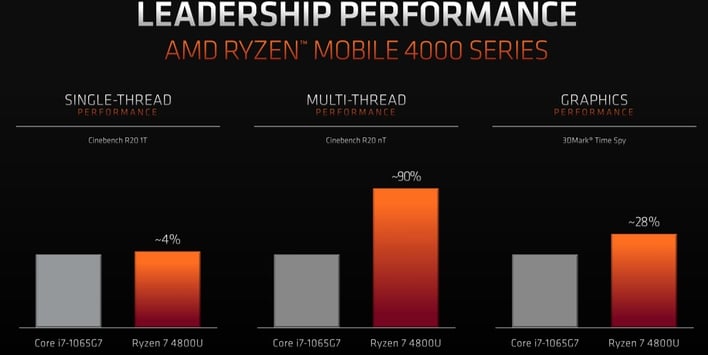 The Ryzen 4000 H-Series lineup initially consists of two processors, the 8-core / 16-thread Ryzen 7 4800H and 6-core / 12-thRead Ryzen 5 4600H. These processors target somewhat larger notebooks that cater to gamers and content creators, and have configurable 35- to 45-watt TDPs, though they can TDP-up to 54 watts in some configurations; power and temperature permitting. 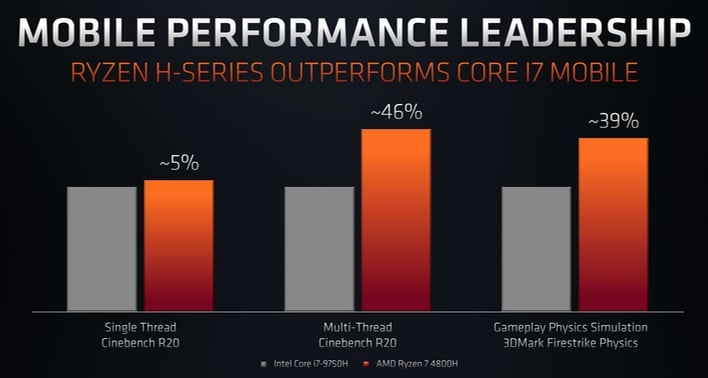 AMD made some bold performance claims with the Ryzen 4000 H series. For example, in comparison to Intel’s Core i7-9750H, which targets a similar class of notebooks, AMD is claiming roughly 5% better single-thread performance and 46% better multi-threaded performance, with heavy workloads likes Cinebench R20. Despite its 45W TDP, the Ryzen 7 4800H even managed to outperform Intel’s Core i7-9700K desktop processor.

AMD also announced a new feature coming to its mobile platform dubbed SmartShift. SmartShift will allow all-AMD based notebooks (AMD CPU + AMD GPU) to intelligently and dynamically take advantage of all available power and thermal headroom, to optimize the performance between the CPU and GPU. Instead of a notebook manufacturer arbitrarily allocating a certain percentage of TDP to the CPU and GPU in its notebook design based on the capabilities of its cooler, because AMD has real-time, deep insight into the power and thermals of its processors, SmartShift can allocate available TDP headroom on the fly. 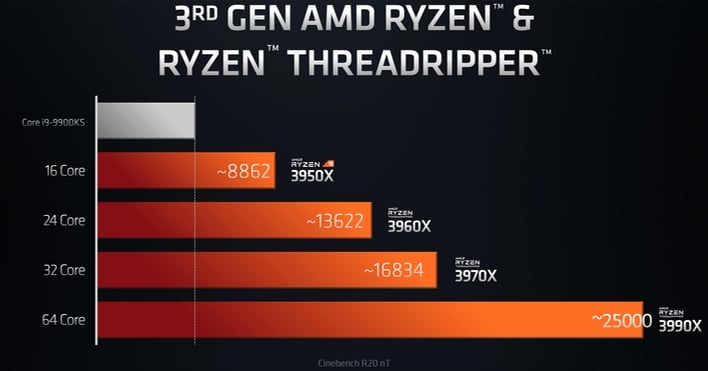 On the complete other end of the spectrum, AMD officially revealed some new information regarding the 64-core / 128-thread Ryzen Threadripper 3990X. We already knew this processor was in-bound, but now have pricing and availability info to share. The AMD Ryzen Threadripper 3990X will have a base clock of 2.9GHz, a boost clock of 4.3GHz, and feature a whopping 288MB of cache.  The chip will drop into existing TRX40 motherboards and be available on February 7th, for a lofty $3990. 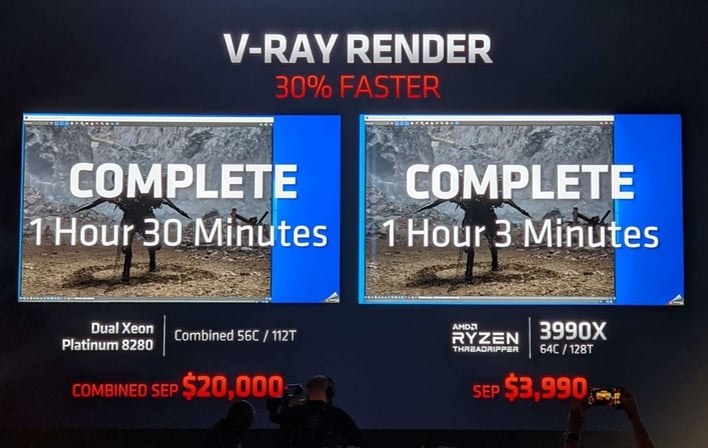 In its presentation, AMD claimed a Cinebench R20 score north of 25,000, which is nearly 3X the performance of Intel’s current flagship Core i9-10980XE.  AMD was also showing benchmark numbers versus a dual socket Intel Xeon Platinum server system in a V-RAY 3D rendering benchmark, where it bests the 56-core server setup by nearly 30 minutes yet costs 10s of thousands of dollars less. Things are looking very promising indeed for Threadripper 3990X, and Intel definitely has reason to be concerned about AMD further encroaching into this highly lucrative sector of the high end X86 processor market.