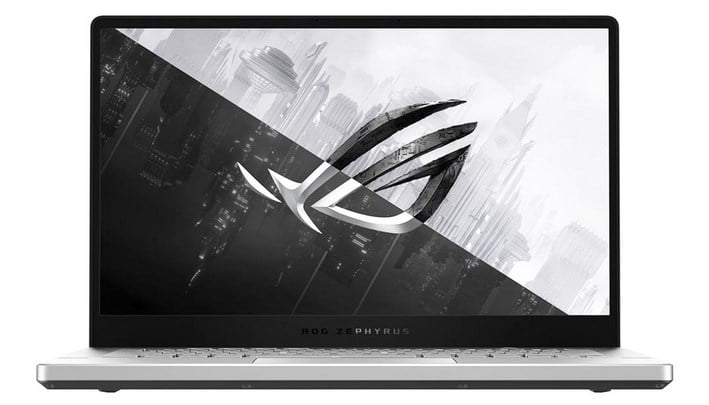 We first got our hands on the AMD Ryzen 4000-powered ASUS ROG Zephyrus G14 during CES early this year. If you are unfamiliar with the ASUS ROG Zephyrus G14, it is a new breed of thin and light gaming notebook, that packs the performance of a much larger desktop-replacement type machine into a slimmer and sleeker 14”, sub-20mm class notebook.

There will be multiple models of the ASUS ROG Zephyrus G14 available when it hits store shelves in the coming days, but at the heart of the particular system we’ll be showing you here today is the flagship AMD Ryzen 9 4900HS 8-core / 16-thread processor. Although the processor features on-board Radeon Vega graphics, our ROG Zephyrus G14 also kicks things up a few notches with a discrete NVIDIA GeForce RTX 2060 Max-Q GPU, with its own dedicated 6GB of graphics memory. There will be models with lower-speed processors and GeForce GTX 16-series GPUs as well, but what we have on tap here represents one of the higher-end configurations.

There’s a lot more to this machine that the CPU and GPU, though, so take a few minutes to check-out our video coverage from the show, peruse its technical specifications, and then we’ll dig in to performance to see if the AMD Ryzen 4000 series and ASUS ROG Zephyrus G14 live up to AMD's hype... 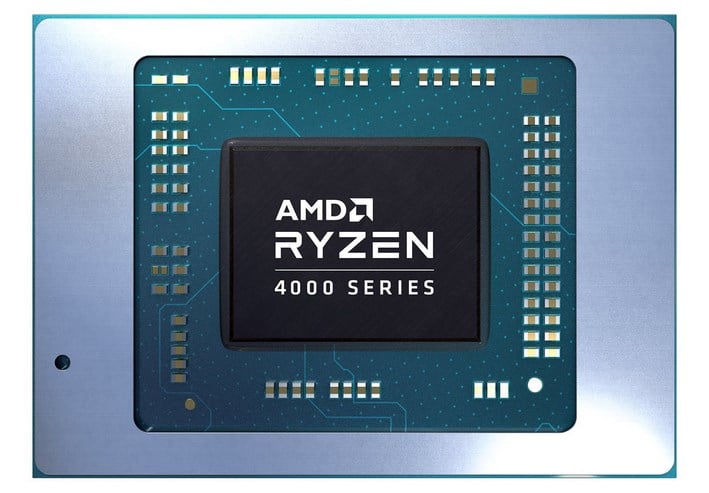 The AMD Ryzen 4000 series processor at the heart of the ASUS ROG Zephyrus G14 is one of the most highly-anticipated products to arrive in quite some time. We have, however, already covered the processor architecture and features in a previous article, so we won't be doing so again here. If you'd like a deeper dive into the architecture it is based on, we'd recommend reading our AMD Ryzen 4000 series and the Zen 2 piece from last week and our original Ryzen 3000-series architecture launch article.

The ASUS ROG Zephyrus G14 has already appeared at a couple of on-line retailers, so they're very close to arriving. What you see here is pre-production hardware, but it should be representative of what will be available on the store shelves shortly. ASUS tells us the machine will be available in Q2, which is technically just a few days away. 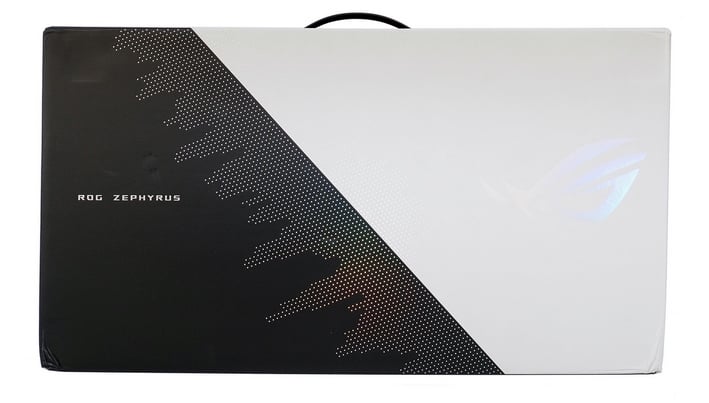 The system ships in a stylish back and white box, adorned with the ASUS ROG logo, some ROG Zephyrus branding, and graphics that resemble the AniMe Matrix LED perforations on the lid. The top of the box flips up to reveal the notebook underneath with another small box off to the side. Inside that box is the included 180-watt power supply / charger and a basic lit pack, and that’s about it. 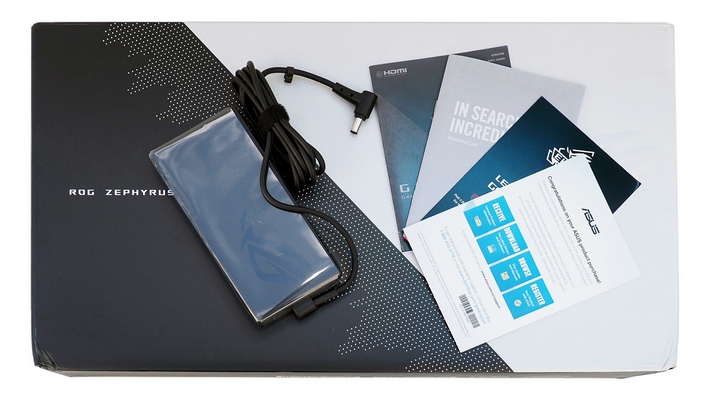 The ASUS ROG Zephyrus G14 is a totally new model in ASUS’ gaming notebook line-up, but it does bare some resemblance to previous-gen offerings in the Zephyrus M and G families. The chassis on this system of built from a magnesium-aluminum alloy, with an aluminum lid, and composite bottom. The standard system we have here without the AniMe Matrix LED lid weighs in at 3.53lbs, and certainly feels sturdy and significant in-hand. If you didn't watch the video above, AniMe Matrix refers at an array of LEDs built into the lid on the ROG Zephyrus, that can be customized to show text, scroll animations, etc. 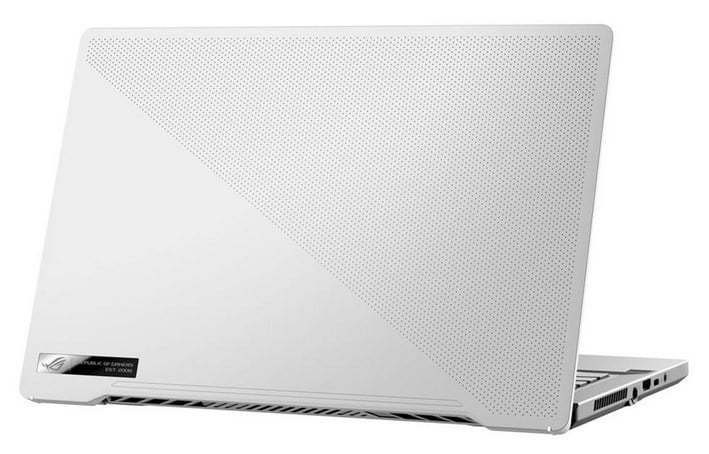 As its name suggests, the ROG Zephyrus G14 is packing a 14” display. There will be three display options available – two 1080p models with 60Hz or 120Hz refresh rates and a QHD model with a 60Hz refresh rate. All of the display options are “IPS-class” and feature matte, low-glare finishes, and Pantone validation for color accuracy. In practice, we found the display on the ROG Zephyrus G14 to offer very good viewing angles, and rich, accurate and balanced color reproduction. The screen is also nice and bright; we measured 446lux at maximum brightness at the center of the display. 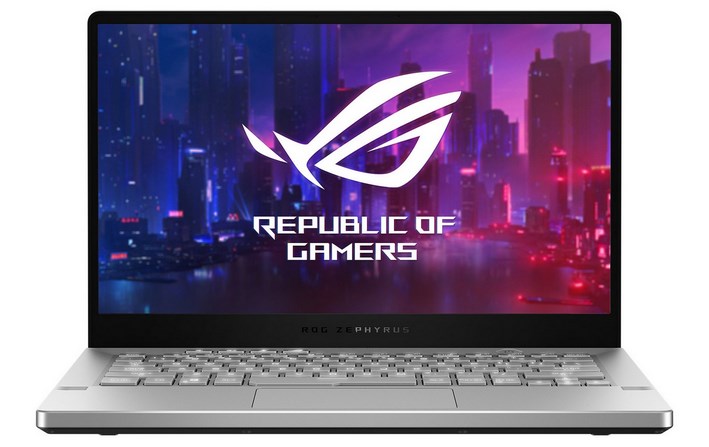 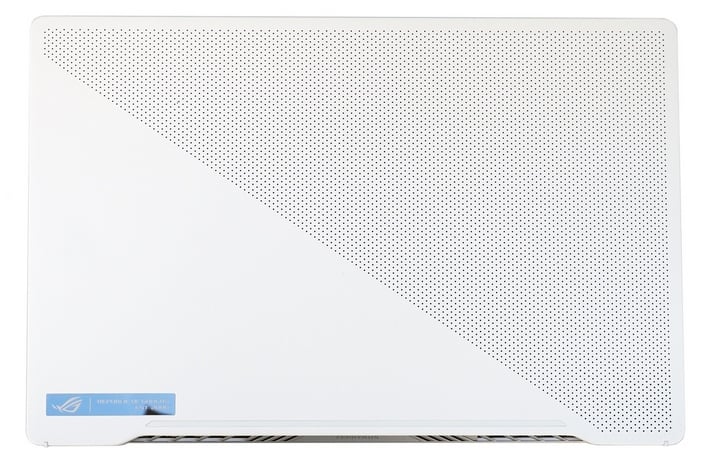 Despite is gaming roots, the machine’s design language is somewhat understated and nowhere near as gaudy as most other gaming-oriented notebooks. The systems will be available in Gray or White and feature a clean keyboard deck and a stylized lid with simple perforations and a small ROG badge. Our machine doesn’t have the AniMe Matrix lighting, but we suppose if it did, it would grab much more attention – when lit up at least. 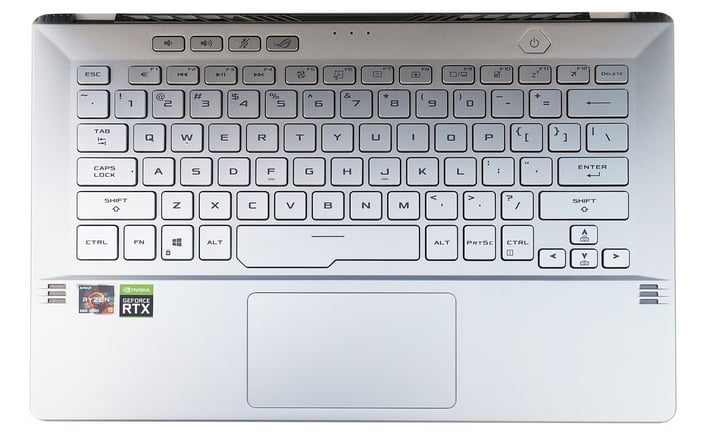 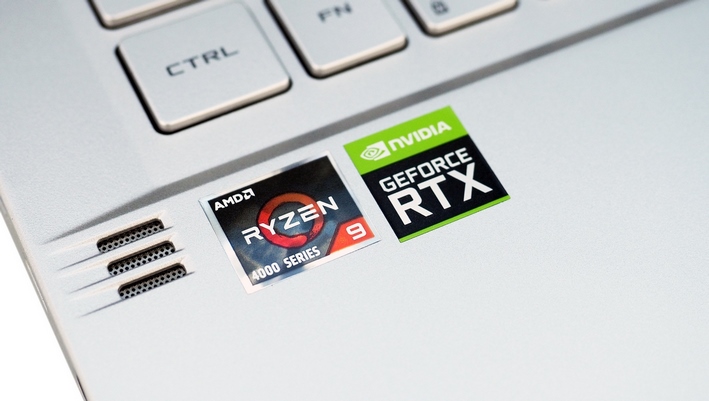 The keyboard is spaced out nicely and offers good tactility and key travel. We did experience some keyboard flex if we pressed the keys particularly hard, but it is minimal and nothing to be concerned about. Off to the sides of the keyboard are a couple of speaker ports, for two of the system’s built-in speakers, and at the top are a trio of volume keys and a ROG key for quickly launching ASUS ROG Armory Crate (more on that in a bit). A trio of status LEDs are centered at the very top of the deck and at the upper-right is the power button, which features a built-in fingerprint sensor. A good-sized touch-pad is centered at the bottom. We found the touch-pad to work quite well. It delivers responsive click-action for left and right clicks and performed perfectly mousing around, recognizing gestures, etc. 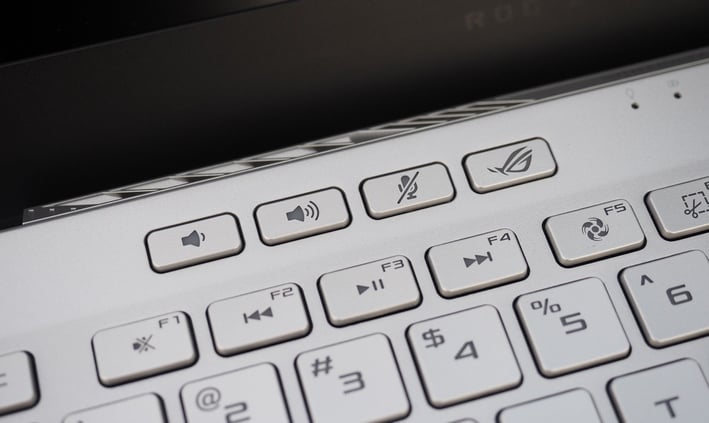 There is a decent array of ports and connectivity options available on the ROG Zephyrus G14. On the left side of the machine you’ll find the barrel-type power port, an HDMI output, a USB 3.2 Gen 2 Type-C port with DisplayPort 1.4 and power delivery, and a 3.5mm audio jack. And on the right side of the machine you’ll find another USB-C port, a pair of USB 3.2 Gen 1 Type-A ports, and a Kensington-style lock. There is no RJ45 LAN port, which is kind of a bummer for serious gamers, and no card reader either. In terms of wireless connectivity though, the ROG Zephyrus G14 is decked out with a leading-edge Intel Gig+ 802.11ax Wi-Fi 6 and Bluetooth 5.0 NIC.

The bottom of the ASUS ROG Zephyrus G14 isn’t particularly attractive. A number of screw holes run around the edges and through the middle, there are four large rubber anti-skid pads (two at the front, two at the back), and there are a myriad of perforations to aid in system cooling and for another pair of speakers. 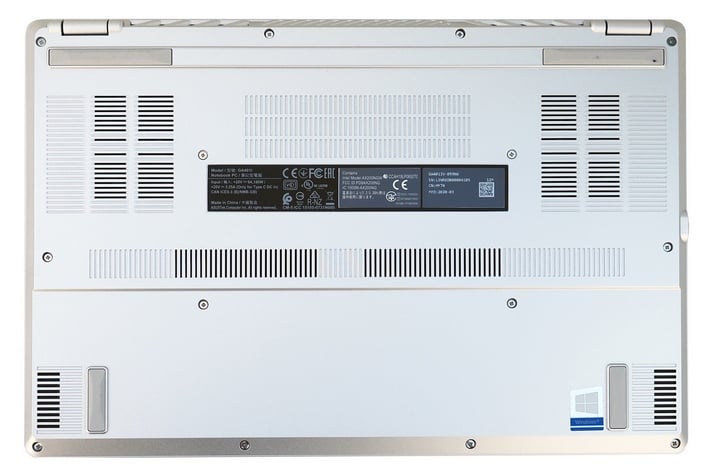 When you open the ROG Zephyrus G14’s lid beyond 90 degrees, its bottom edge will make contact with the surface the system is resting on and elevate the bottom of the system by up to 1.5cm. Lifting the bottom of the system is meant to improve the typing angle, enhance airflow into the vents, and enhance the effectiveness of the speakers (ASUS calls the feature ErgoLift). While we're on the subject of speakers, we should also mention that the audio output from the ASUS ROG Zephyrus G14 is very good, especially for a notebook this size. Volume levels are quite good, but as is typically the case with small notebook speakers, don't expect a ton of bass. Though if you’re gaming, a good headset is a must.

ASUS ships the ROG Zephyrus with a fairly clean Windows 10 installation that’s mostly devoid of bloatware. Thankfully, there was no annoying anti-virus / anti-malware pop-ups to deal with, though users will be nagged to register the system (on more than one occasion) through the MyASUS program. Other than that, though, ASUS includes a few utilities to help users customize and monitor their systems and get the most of out the machines. 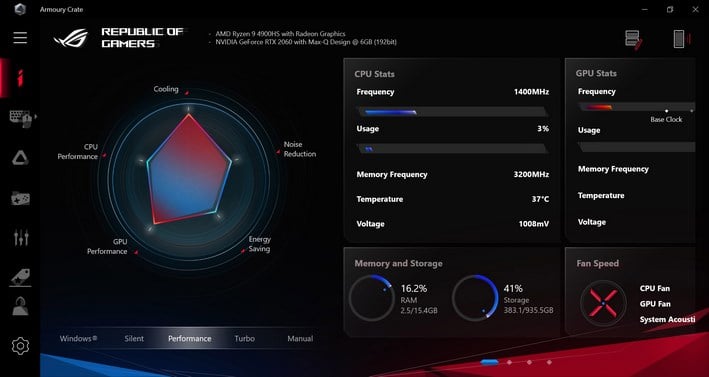 Along with the hardware health and monitoring functions, current settings can be viewed via the radar chart and switched via the buttons directly below. The default profile for the machine is ‘Performance’ mode, but users are also offered Turbo, Silent, Windows, and Manual Operation modes. 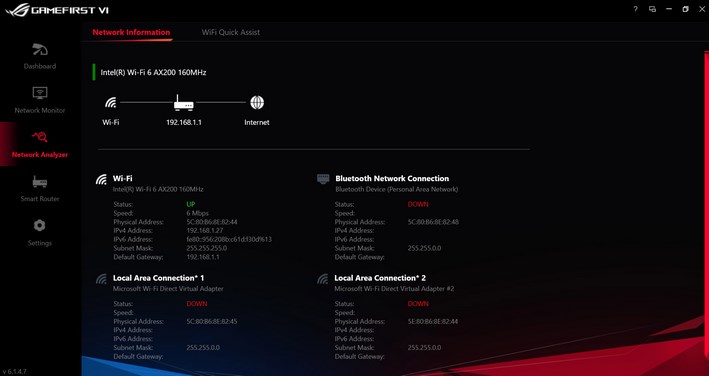 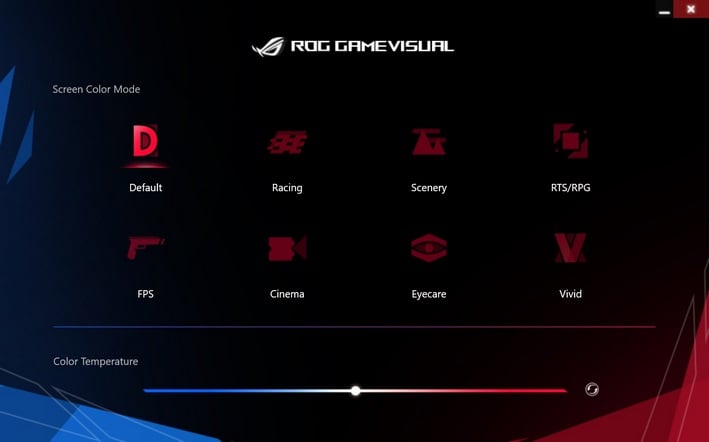