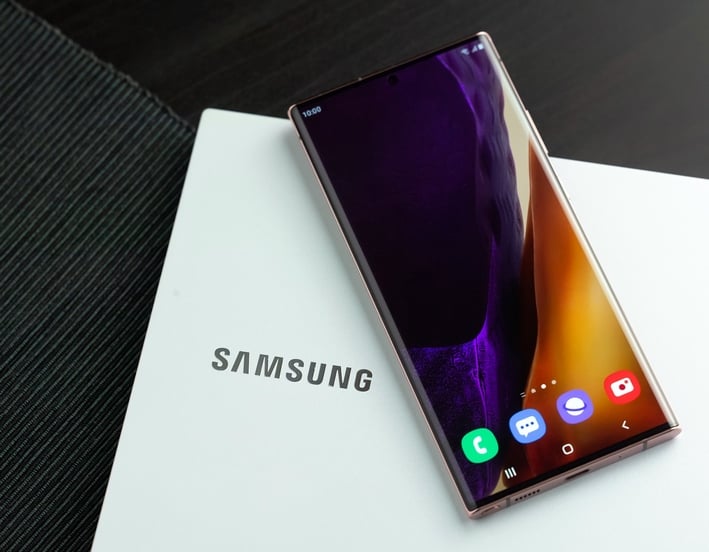 Samsung announced its latest flagship, large-format smartphones -- the brand-new Galaxy Note 20 5G and Galaxy Note 20 Ultra 5G -- at this month's Galaxy Unpacked Event, along with a host of additional wearable and tablet products. As is typically the case when Samsung updates its premiere line of devices, the new Galaxy Note 20 family offers an array of enhancements and improvements over the previous generation. For example, these new Galaxy Notes are built around a more powerful processing platform, they have numerous camera and video updates, offer support for new Ultra Wide Band wireless technology, and they have deeper Microsoft app integration, among several other new features.

We have a Samsung Galaxy Note 20 Ultra 5G in Mystic Bronze in house for testing and evaluation. The smaller Note 20 “non Ultra”, has mostly the same internals, but sports a slightly smaller, flat screen, less memory, a lower resolution main camera, a smaller battery, and no expandable storage, among a few other minor differences. 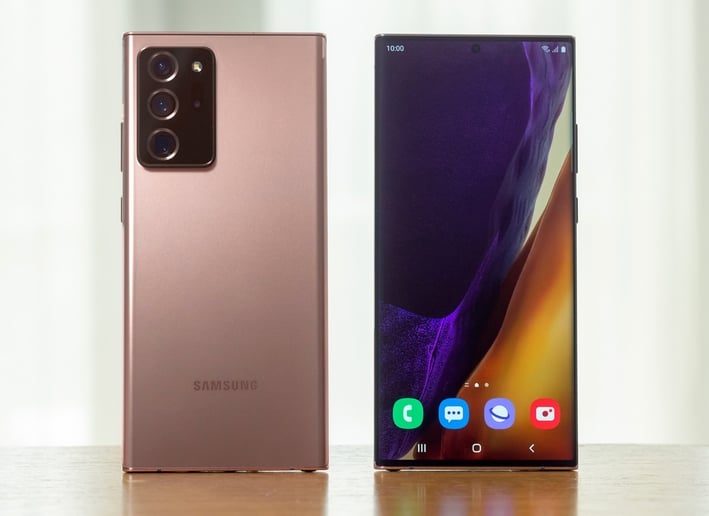 If we focus on the Note 20 Ultra we have on hand, looking at its main features and specifications above, it’s clear that the device is packing some leading-edge hardware and technology. As the 5G in the Snapdragon 865+’s branding suggests, both the Note 20 supports 5G wireless connectivity, on both Sub-6 and mmWave networks thanks to the integrated Snapdragon X55 5G Modem-RF System. We should also mention that the Note 20 is the first device to feature Qualcomm’s LPAMiD QPM5625 low-band 5G/4G power amplifier module, which should result in superior global network connectivity over “older”, 5G-enabled devices. The Note 20 also supports the latest Bluetooth and 802.11ax (Wi-Fi 6) standards as you would expect, in addition to UWB, or Ultra Wideband Technology. The Note 20’s UWB support is a first for Samsung, and will enabled high-speed, file sharing by simply pointing compatible devices at each other, along with an array of location and short-range communication technologies. Samsung tells us new features will be added over time, like integrated smart-home controls and digital key capabilities to name a couple. 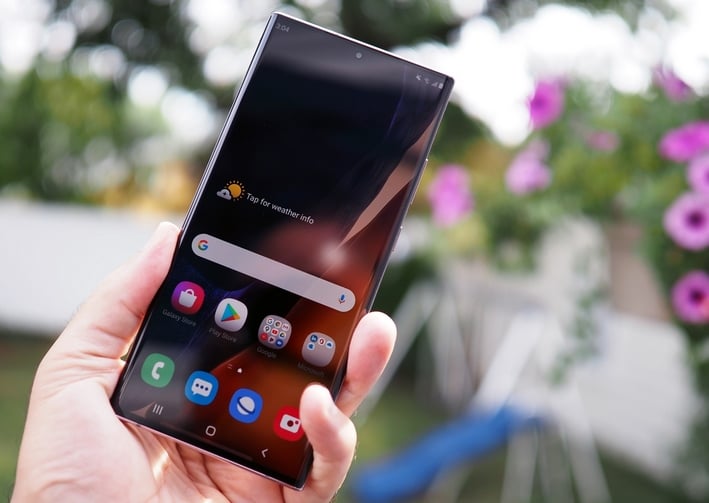 Paired to the Snapdragon 865+ 5G will be either 8GB (Note 20) or 12GB (Note 20 Ultra) of LPDDR5 RAM and at least 128GB of internal storage. Our Note 20 Ultra has 128GB of storage, but a top-end 512GB variant will be offered as well. We should also mention that the Ultra can be expanded via microSD card, whereas the standard Note 20 cannot.

Powering the larger Galaxy Note 20 Ultra is a 4,500mAh battery. The smaller Note 20 is packing a respectable 4,300mAh battery. Both phones also support high-speed quick charging technology, that will allow the phones to recharge to 50% capacity in only 30 minutes and, despite offering better performance, Samsung is claiming improved battery life over the Note 10 and Note 10+. 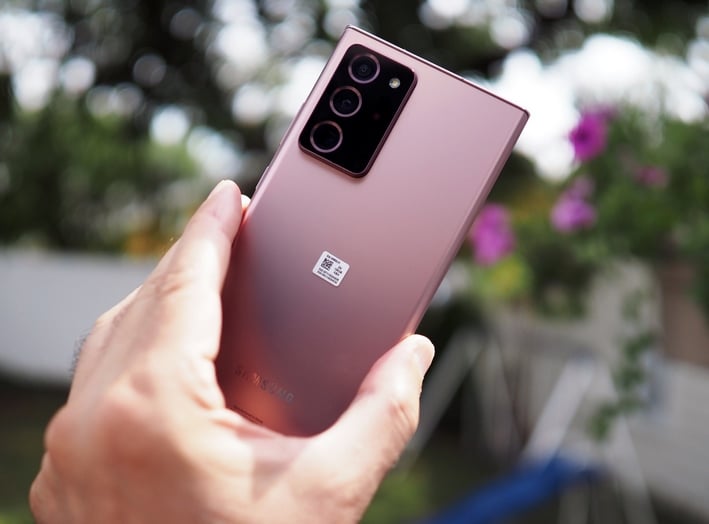 The Galaxy Note 20 Ultra includes a 6.9” display, with a 3088x1440 native resolution (496ppi, HDR10+ certified). The Galaxy Note 20 has a smaller 6.7” display with a 2400x1080 native resolution (393ppi, also HDR10+ certified). Not only are the display sizes different, but their designs are as well. The Note 20's display is perfectly flat, whereas the Note 20 Ultra has a curved waterfall design like the previous gen Note, Both devices, however, have a single circular punch-out at the top for the front-facing selfie camera. 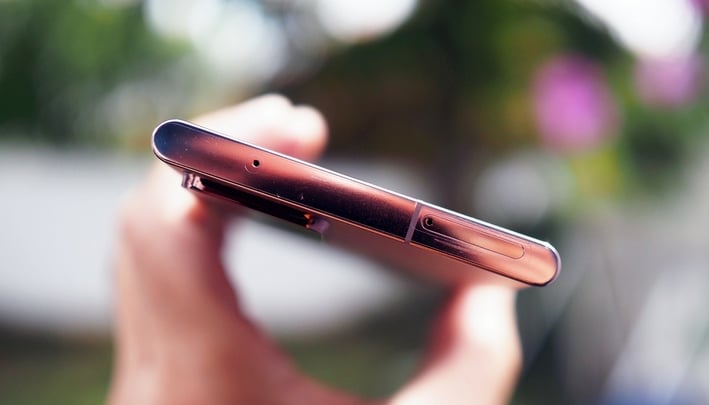 In terms of their overall physical dimensions, only a couple of millimeters separate the new Samsung Galaxy Note 20 and Note 20 Ultra. The larger Note 20 Ultra pictured here weighs in at 208g and is 164.8 x 77.2 x 8.1mm. The smaller Note 20 arrives at 192g and 161.6 x 75.2 x 8.3mm. Both devices have a similar industrial design, with triple camera array on the rear and single punch-out on the front display. And both devices carry IP68 dust and water resistance ratings. The port locations and button placement are the same across both devices as well, but are different than the Note 10. The buttons have been moved to the opposite side of the device. So too has the S-Pen dock at the bottom. 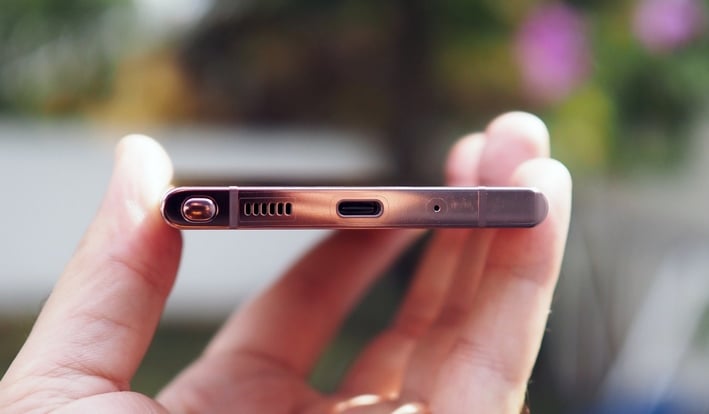 Speaking of the S-pen, though the size, shape and button configuration of the Note 20’s S-Pen is similar to the Note 10, Samsung has optimized its performance considerably to reduce latency and improve the overall writing experience. Samsung is claiming up to a 40% reduction in latency, which brings the response time down to about 9ms. Samsung will also be incorporating additional Air Actions, which will give the new Galaxy Note 20s some new tricks when being used for presentations and the like.

The industrial design and overall aesthetic of the Note 20 Ultra is similar to the previous-gen Note 10+, but there are some notable differences. As mentioned, the buttons and S-pen dock have been flipped to the opposite sides of the device. The back of the Note 20 Ultra also ditches the glass in favor of a brushed metal finish, but like the Note 10, the bottom is home to a sole USB-C port -- there's no headphone jack to be found. The rear camera bump-out on the Note 20 Ultra is also much larger than the Note 10+'s. The camera bump-out is so large that when you put the phone down it rests on the bump-out and not the larger, flat area on the back – we’ll dig deeper in the actual camera setup on the next page.

The Samsung Galaxy Note 20 ships with Android 10, with Samsung’s UX interface enhancements integrated into the OS. As much as we like a clean, unaltered Android experience, we dig many of the additions offered by Samsung’s current UX, many of which are essential to leverage the proprietary features available on the device.

The Note 20 Ultra feels polished, fluid, and fast. It’s too early to comment on long-term performance, which has been an issue on many devices as they get polluted with apps and bit-rot, but I’ve been using a Note 10+ as my daily driver almost since its release and the phone is still behaving perfectly – we suspect the Note 20 Ultra will behave just as well.

When the Note 20 Ultra is first powered on and set up, the home screens are fairly clean of widgets and shortcuts and the app tray is uncluttered and well organized. Responsiveness to touch is excellent and there is minimal lag when touching / dragging items. Pinch to zoom is fluid and responsive as well, and transition animations are buttery smooth, especially when using the lower screen resolution and 120Hz adaptive refresh rate option.

In addition to the standard Google-fare included with Android 10, the Samsung Galaxy Note 20 Ultra comes preloaded with a handful of other applications, including AR Zone, Bixby, Galaxy Wearable, Samsung’s browser, My Files, PENUP, Samsung Health, Samsung Members, SmartThings, Samsung Notes, Samsung Global Goals, Smart Switch, Spotify, and Samsung Pay. A Microsoft folder is pre-installed as well, with LinkedIn, Office, OneDrive, and Outlook. Relative to some other flagship devices, the Note 20 has quite a bit of pre-installed software, which is likely to turn off some Android purists, but there’s nothing over the top and obtrusive. Swiping in from the small tab visible on the right side also exposes the apps edge feature, which is fully customizable and can be moved to other parts of the display.

Many of the apps included on the Note 20 Ultra are optimized for use with Samsung's S-Pen. The Note 20 works perfectly fine with finger / gesture input, but the S-Pen adds another level of precision and additional features. When you pull the S-Pen out of its dock, an array of options slide onto the screen and are available with a quick tap. The Note 20 will also offer new PDF annotation, auto-straightening of handwritten notes, new customizable folder and page structures, and better handwriting recognition. Samsung is actually leveraging AI on the device as well, to better learn your handwriting over time.

We should also point out that Samsung’s DeX desktop user experience can now be used wirelessly on any Miracast-compatible television or display. Samsung’s Notes can now live-sync and save straight to the cloud, so files can be accessed on any device, provided the user is signed into his or her Samsung Account. 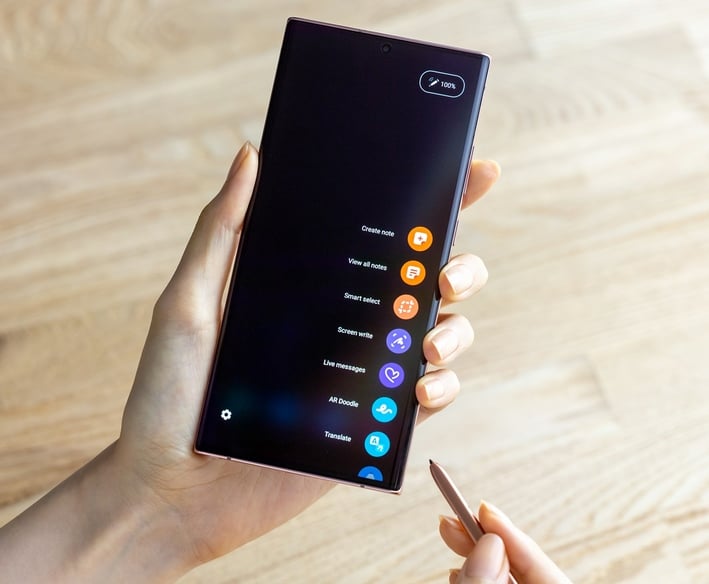 The Microsoft Office experience with DeX has been further optimized and Samsung Notes can also auto-save and sync with Outlook and OneNote, or export notes to Word or PowerPoint. Outlook reminders can sync across devices as well, and drag-and-drop is being enhanced to facilitate sharing between smartphones and Windows devices. Galaxy Note 20 owners will also be gaining access to Xbox Game Pass Ultimate.

With all of that out of the way, let’s play with the Note 20 Ultra’s cameras a bit and see what they can do...
NEXT PAGE