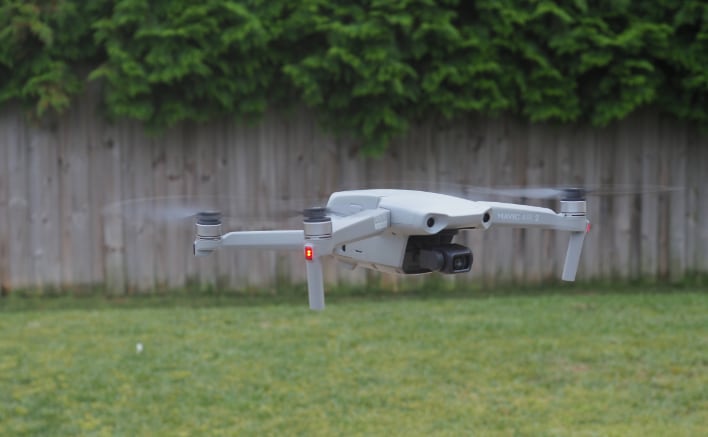 DJI brought a lot to the table with its original Mavic Air that launched back in 2017. It was a step up from DJI's entry-level Spark, but not quite as feature-packed and robust as the Mavic Pro. In other words, Mavic Air struck a nice balance in between the aforementioned product bookends with respect to performance, features, and price. And unsurprisingly, it became one of DJI's most popular drones as a result. As you might expect, DJI needed to follow up on the original Mavic Air with a worthy successor, and we have that now with the aptly-named Mavic Air 2.

The Mavic Air 2 bests its predecessor in nearly every respect. It’s bigger, faster, and has a longer range, while adding new features to entice current Mavic Air owners to upgrade. DJI has even paid particularly close attention to the remote controller, which now makes it easier to attach your smartphone, although it still isn’t perfect (more on this later).

Getting A Feel For The Mavic Air 2

As someone who has owned a DJI Spark and the original Mavic Air, the Mavic Air 2 felt like slipping on a proper pair of worn-in and comfortable shoes. The design is highly reminiscent of the preceding Mavic Air, but includes a few refinements to the design. The front arms no longer include flip out landing legs (they are instead now stationary), and the body that was once available in three different colors is now only offered in a light grey finish.

Speaking of the body, the Mavic Air 2 feels more robustly built and is larger in every dimension. We have two items of caution, however, that you’ll want to take note of when attempting to take off. For starters, the back-end of the drone sits very low to the ground, which could impede the path of the rear propellers when attempting to takeoff in grassy areas. After one close call, we used a landing pad for future takeoffs. 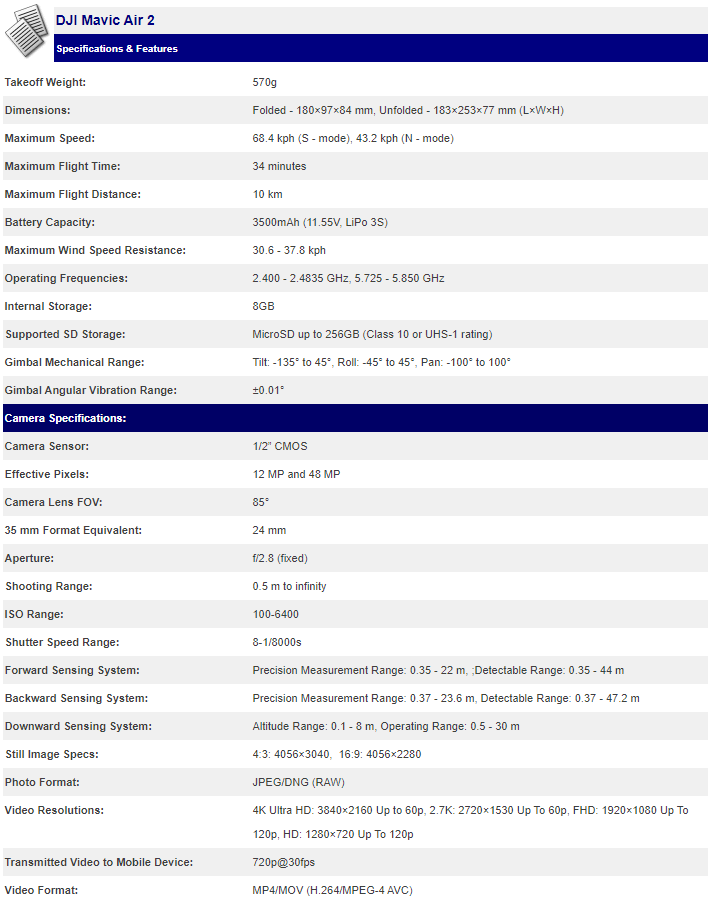 The second item relates to the propellers, which are properly marked (both on the propellers and on the each of the four motor hubs) to let you know where to install them. At one point, we were quickly installing the propellers and didn’t pay attention to their positioning (absolutely my fault, of course). We were greeted with the propellers spinning at incredibly high RPMs while a “motor overload” warning was displayed in the DJI Fly app. After scratching our heads for the a few minutes, we recognized our error: the two rear propellers were installed on the wrong arms which prevented the drone from taking off. We swapped the propellers around, and were off and flying again – crisis averted. 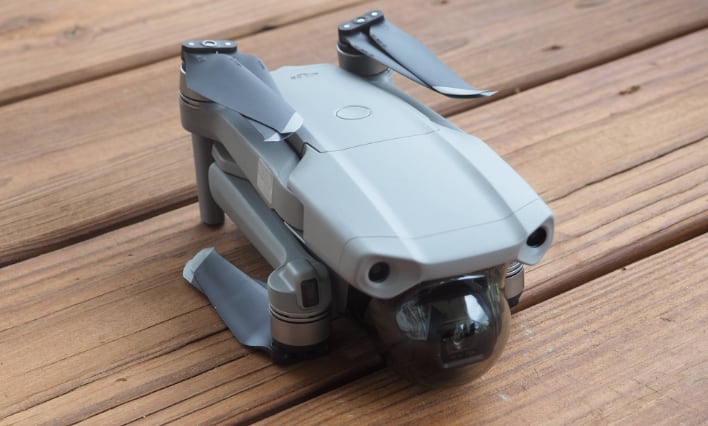 One dimension that particularly stands out is weight, which has increased from just under a pound to 1.25 pounds. Luckily, part of that added weight has gone towards the battery (3,500 mAh versus 2,375 mAh) and more efficient internal circuitry, which allows the Mavic Air 2 to remain aloft for up to 34 minutes instead of the short 21 minutes of the Mavic Air. In addition, DJI lists a top speed of 42.5 MPH for the Mavic Air 2, which we were indeed able to hit with ease in Sport mode.

Besides the appreciable gains in endurance and quieter operation thanks to the revised propellers, there are a slew of other enhancements that make the Mavic Air 2 a nice upgrade over the Mavic Air.

The Mavic Air 2 offers a significant improvement in photo and video quality thanks to a new 12MP 1/2-inch Quad Bayer sensor (which is attached to a 3-axis gimbal), versus the 12MP 1/2.3-inch sensor on the Mavic Air. The aperture is fixed at f/2.8, and the camera is capable of taking 48MP still shots. Images can be saved in JPEG, RAW, or RAW + JPEG formats. When it comes to video, the Mavic Air can shoot 4K/30fps video at up to 100 Mbps, whereas the new kid on the block ups those specs to 4K/60fps at up to 120 Mbps. It can also shoot 240fps slow-motion video at 1080p.

We were quite pleased with the photos and videos that the Mavic Air 2 took, which you can see embedded here. The images look about as good as you can expect from a device with such a small image sensor, and you can definitely pick up noise as you zoom in on images and do some pixel peeping. Hitting anything above ISO 100 or 200 will really crank up the noise, but for the average consumer, photos and videos taken in auto mode should be more pleasing to the eye, especially when scaled for the web. 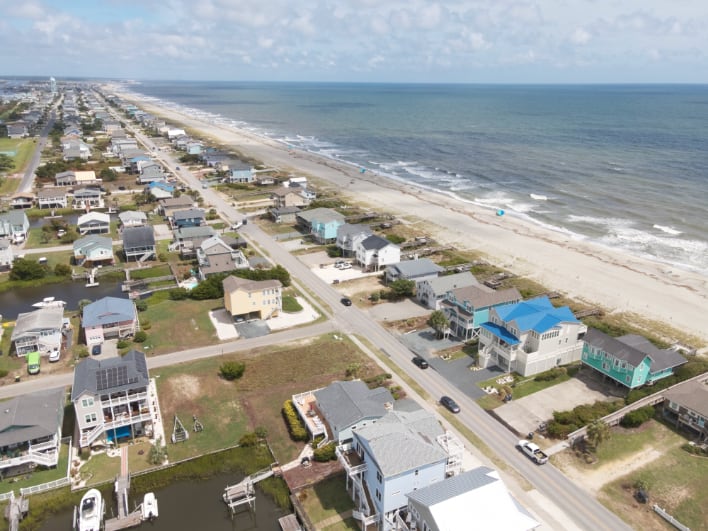 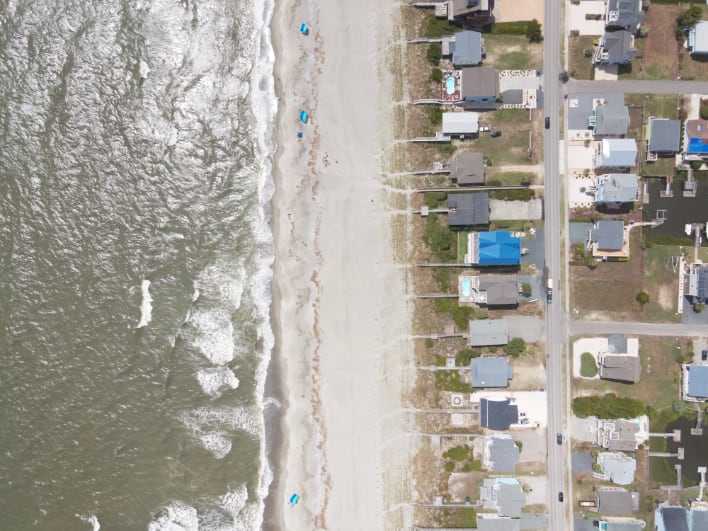 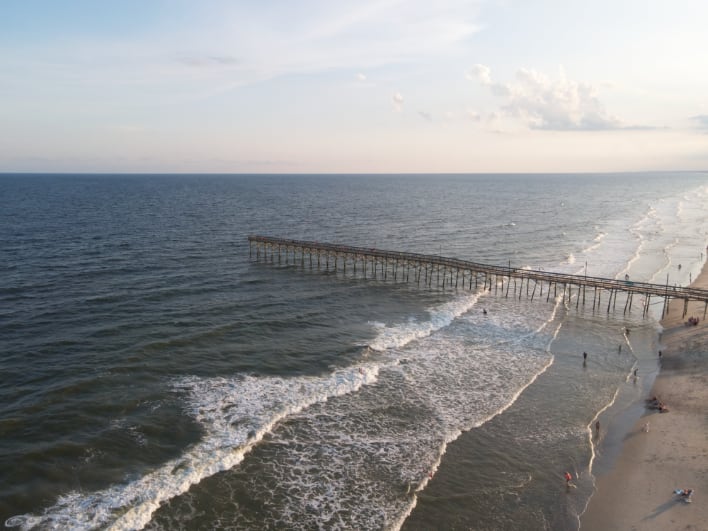 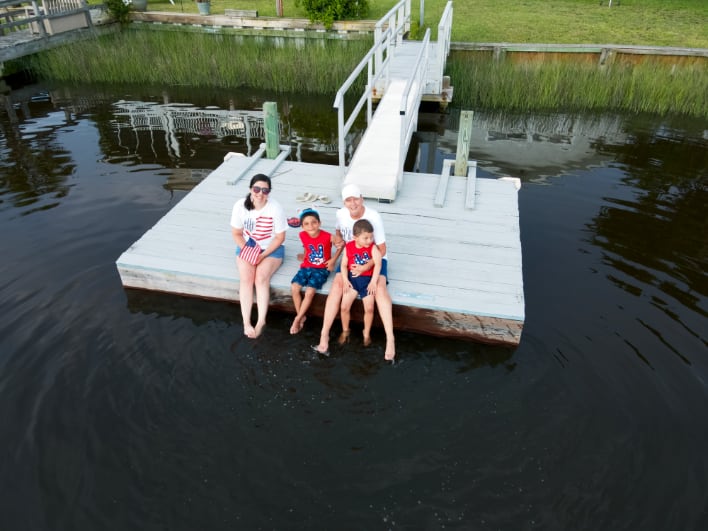 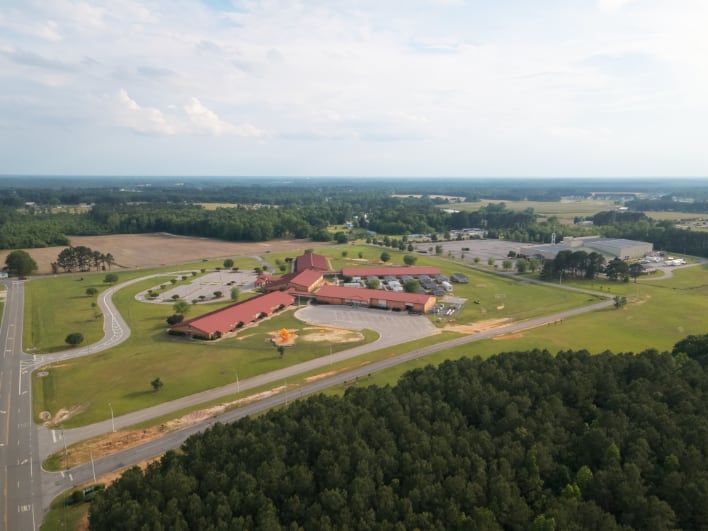 One of the other new additions is an 8K HyperLapse mode allows the Mavic Air 2 to capture a series of photos while in flight, which are then processed as a time-lapse video. HyperLapse is available in both 1080p and 8K modes. When shooting 8K HyperLapse, the minimal interval between shots is 6 seconds; that drops to 2 seconds in 1080p mode. A recent firmware update (v01.00.0340) added a much-requested 4K HyperLapse mode as well.

Rather than the cumbersome folding mechanism of the Mavic Air controller (with its awkward left-mounted connector for your smartphone), the Mavic Air 2 controller features a spring-loaded arm that lifts upward and uses pressure to hold your smartphone in place. You can then easily route the connector to the bottom of your iPhone or Android device. The spring-loaded mechanism is a better thought out solution than its predecessor, but is still a tricky two-handed operations to attach your smartphone until you get the hang of it. 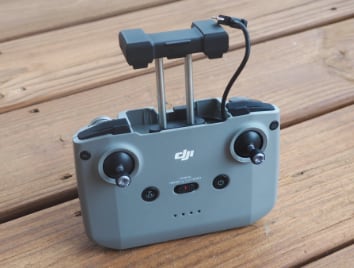 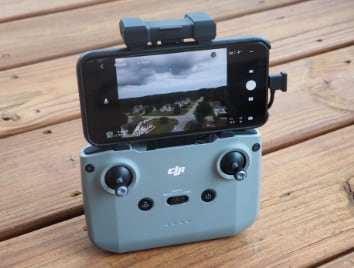 Like before, the thumb sticks are removable, and can be stored in the bottom of the controller. Two spares are included if you manage to lose the originals, which is bound to happen at some point during your time with the Mavic Air 2.

Unlike the Mavic Air, the Mavic Air 2 uses OcuSync 2.0 instead of modified Wi-Fi to communicate between the drone and the controller, switching between 2.4GHz and 5.8GHz frequencies. DJI says that the drone can stay connected with the controller at distances of up to 10km, but we saw signal cutouts at distances far shorter than that, which caused the drone to go into "Return to Home" mode automatically. We saw greater interference at home, where we're surrounded by dense woods, rather than on a beachfront setting, which was more wide-open with flat land and minimal impediments. With that being said, overall range here still surpasses that of the original Mavic Air.


The Mavic Air 2 also has enhanced obstacle detection with obstacle sensors up front, in the rear, and on the bottom. There's also an auxiliary light on the bottom of the drone which is very helpful when flying at night (to catch 4th of July fireworks, for example). The sensors are integrated into the APAS 3.0 system, which allows the Mavic Air 2 to use mapping technology along with advanced flight algorithms to smoothly move around, over, or below objects that may be in the path of the drone.

Like its predecessor, the Mavic Air 2 features a number of automated flying modes which help you get that “perfect” shot as part of the FocusTrack suite. There's the third-generation ActiveTrack 3.0 system, which allows the Mavic Air 2 to follow you around as you walk, run or even ride your bike. ActiveTrack 3.0 also adds in mapping technology for obstacle avoidance while maintaining a lock on the subject. Points of Interest has been updated to v3.0, and allows you to set an automated flight patch around the subject (including vehicles and pets). Finally, there's Spotlight 2.0, which keeps the subject in frame while the operator has control over the Mavic Air 2's movement.

There's also the usual assortment of QuickShots in the Mavic Air 2's repertoire. For those unfamiliar with QuickShots, they are automatically generated short video clips that track along a predetermined flight path. The Mavic Air 2 is now able to use its 3-axis gimbal in conjunction with electronic image stabilization to further smooth out the captured footage. Some of the popular modes include Rocket, Helix, Boomerang and Asteroid.

One final item that we’ll touch on is AirSense. According to DJI, the Mavic Air 2 is the first consumer drone to feature AirSense, which alerts you when other aircraft are operating in your area. The feature can intercept ADS-B signals from nearby fixed-wing aircraft and helicopters, and their position is then displayed on your display screen via the DJI Fly app. AirSense is initially only available in North America, but will soon be offered in additional regions.

We’ve been playing around with the Mavic Air 2 for over a month now, and must say that we’ve grown to like this new DJI drone quite a bit. It’s easy to fly and it offers plenty of endurance (we were able to fly around for over a half hour during most flights with a mixture of sport mode and normal mode). I even handed the controls over to my 8-year-old son, who was able to take off, fly, and land without issue. We should note, however, that the obstacle detection sensors helped out on a few occasions during his flights, which did protected the Mavic Air 2 in some sticky situations.

The Mavic Air 2 is an excellent update to the original Mavic Air, and its appreciable gains in performance, endurance, and quieter operation (due to the redesigned propellers) make it an easy recommendation for anyone that wants a rock-solid aerial photography platform that is more capable than the entry-level Mavic Mini. The Mavic Air 2 is a breeze to learn and fly for first-timers and it delivers performance on many fronts that seasoned flyers, creators and videographers might require as well.