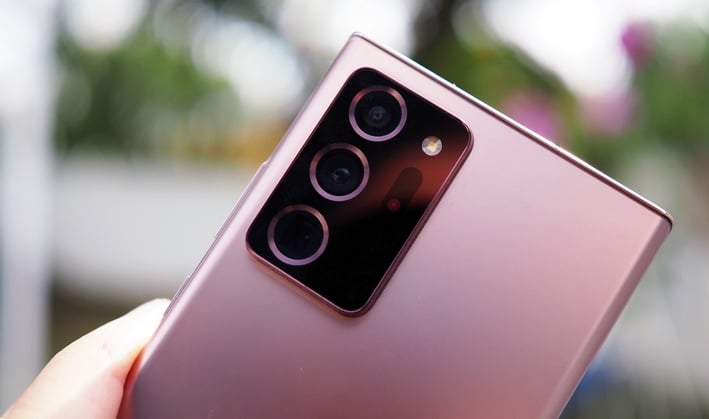 There have been a number of enhancements made to the camera system available on the Galaxy Note 20 Ultra. There is a more feature-rich Pro Video mode available, which gives users manual controls over every aspect of the video capture (ISO, shutter speed, white balance, aperture, zoom, etc.) and an array of resolutions and framerates are available in both 16:9 and 21:9 aspect ratios, including 8K recording up to 24 FPS. Users can even create quick “highlight reels” from multiple video clips with just a few taps.

There are some audio-related enhancements available as well. For example, the microphone direction can be altered while shooting video with just a single tap, should users want to capture audio from subjects in front of or behind the device. Samsung also offers the ability to use Bluetooth-connected buds as a wireless microphone input with the Note 20, which is a great new feature for shooting video in noisy environments.

To test the Galaxy Note 20 Ultra’s camera system, we took an array of photos using the various modes in a variety of environments and lighting conditions. By default, the Scene Optimizer option in Samsung’s camera app will automatically choose what it thinks is the correct camera mode based on an analysis of the scene. For example, in darker conditions, Night mode is often automatically enabled. 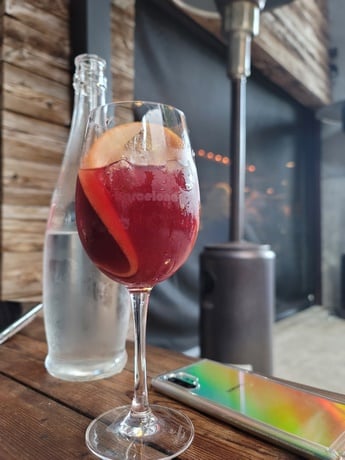 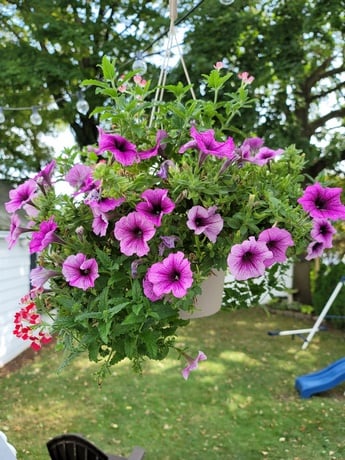 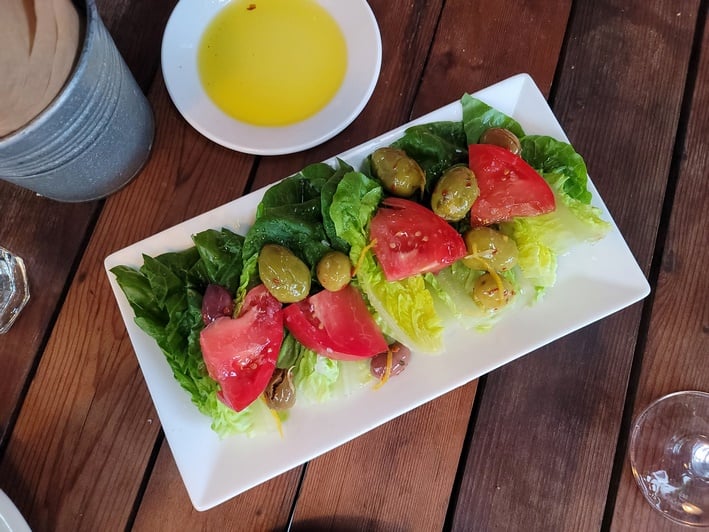 These first few images were captured with the Note 20 Ultra’s camera in auto mode in the late afternoon / early evening on a bright sunny day. Sharpness and focus look good, but the images are just a slight bit over saturated and perhaps lack some fine detail. Overall though, they look quite good though, and are perfectly acceptable. 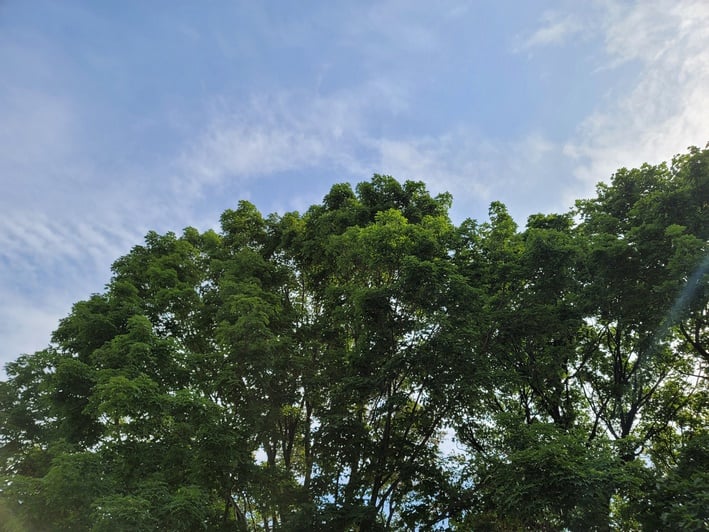 The dynamic range of the Note 20 Ultra’s camera also appears to be relatively good. In this shot, the standard shooter is able to capture some fine detail in the leaves of the tree (which are in shade), without over exposing the sky and clouds. There is some serious processing going on in the image, however, as evidenced by the noticeable halo or glowing artifacts visible around the edges of the leaves at the top of the trees. 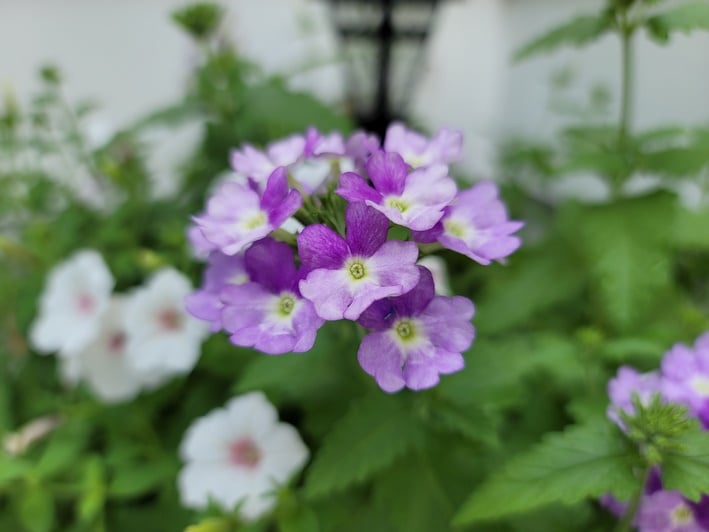 Close-up macro-type shooting appears to function very well on the Note 20 Ultra. These flowers were constantly moving due to the wind and were not in direct sunlight. The center of the image (where we focused) looks good as the bokeh visible outside of the camera’s field of view is pleasing for an image captured with a smartphone. 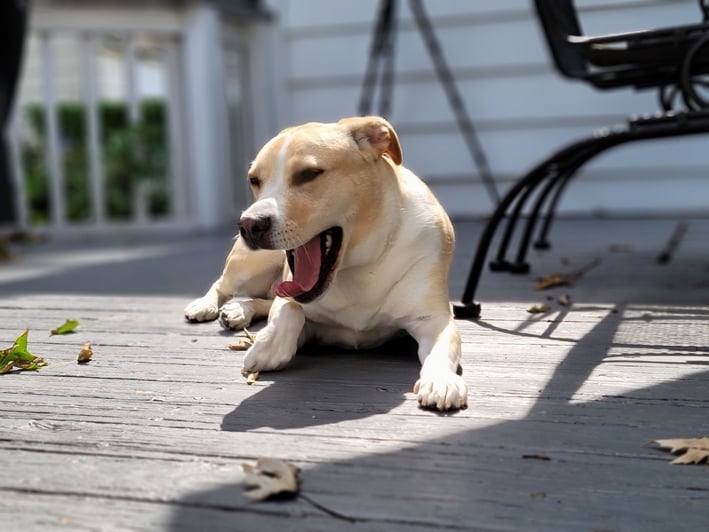 Live Focus, i.e. Portrait Mode, on the Note 20 Ultra also works relatively well, but is best suited for subjects with sharp edges that are clearly separated from the background (in terms of distance and color). While Mackie was basking in the sun, we captured this shot, which looks pleasing when scaled down on the page. Click it for an enlarged view though, and you’ll see some wonky blurring in her whiskers on the left and along the top of her head. 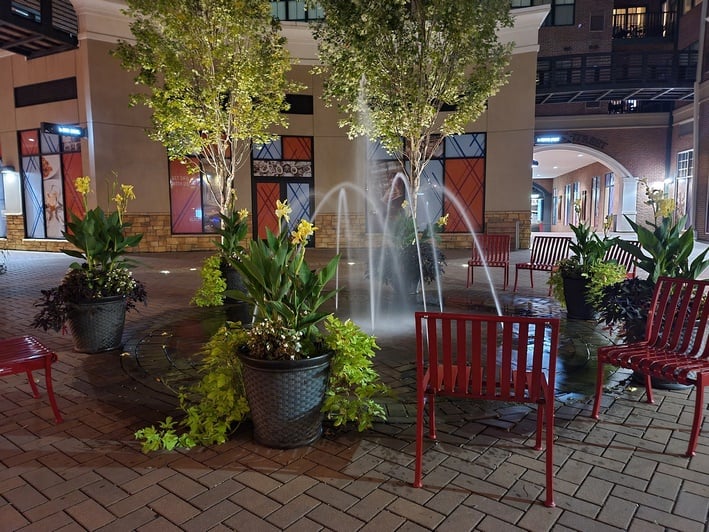 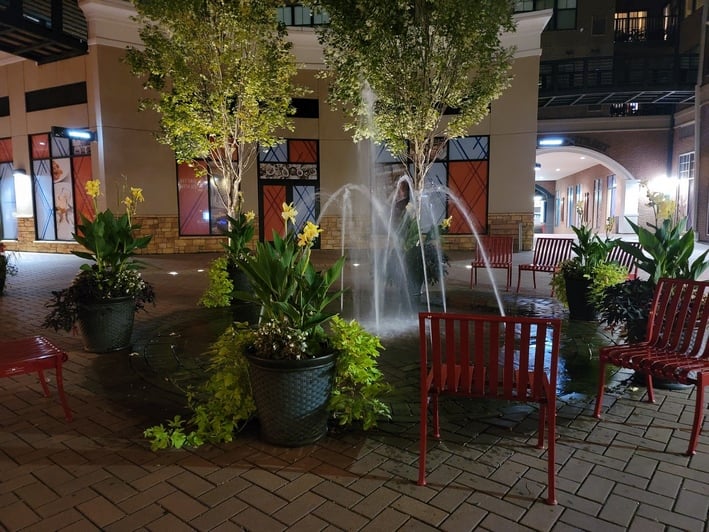 Night mode seems somewhat conservative on the Note 20 Ultra. These two shots of the fountain where captures just after sunset. As you can see, the darker areas were brightened somewhat (most noticeable on the ground and base of the fountain), but the blooms from the artificial lighting were actually subdued. The processing of the image also causes a blurring effect in the water, similar to a long exposure. 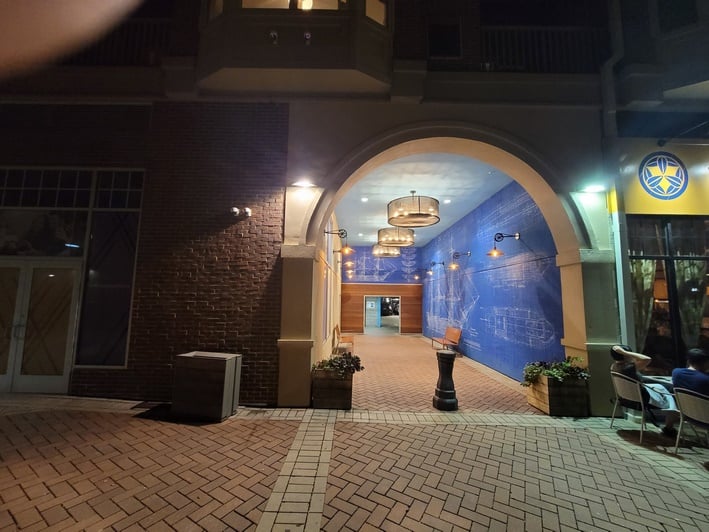 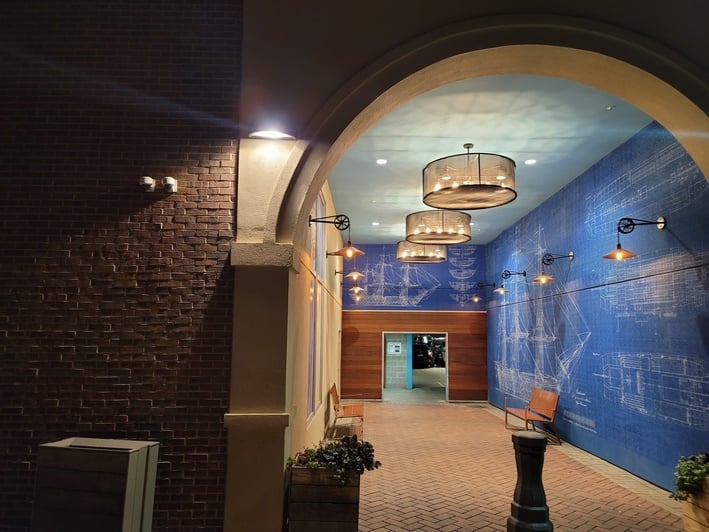 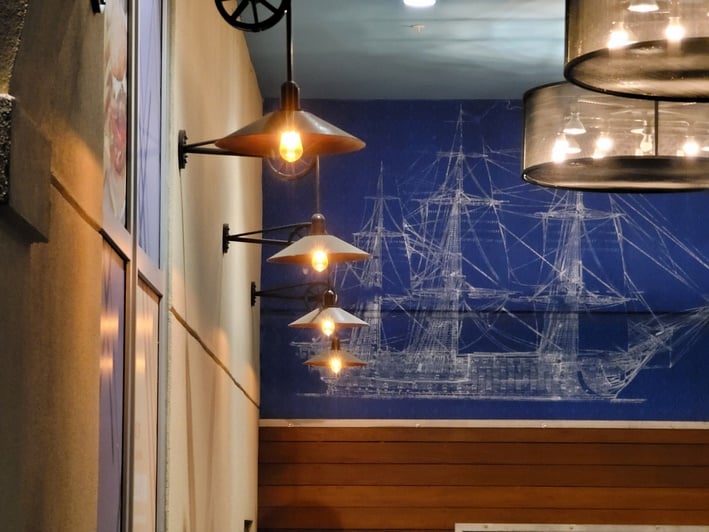 
This sequence of images is designed to illustrate the default zooms and fields of view for the Note 20 Ultra’s triple rear camera. We are focusing on the string of four wall-mounted lights, just about in the center of the image. Notice how distant and small they appear when using the wide-angle camera (don’t mind my fat finger in the corner). With the standard shooter (which offers 5x optical zoom), the subject is brought much closer. And with the telephoto camera, the subjects are brought much closer still, and fine detail is visible in the back wall.

Of course, there are many more zoom options available with the Note 20 Ultra if we factor in the optical zoom and AI-assisted Super Zoom. We apologize for the sheer number of images here, but figured many of you would like to see exactly what the field of view looks like using all of the option available while shooting in auto mode on the phone. 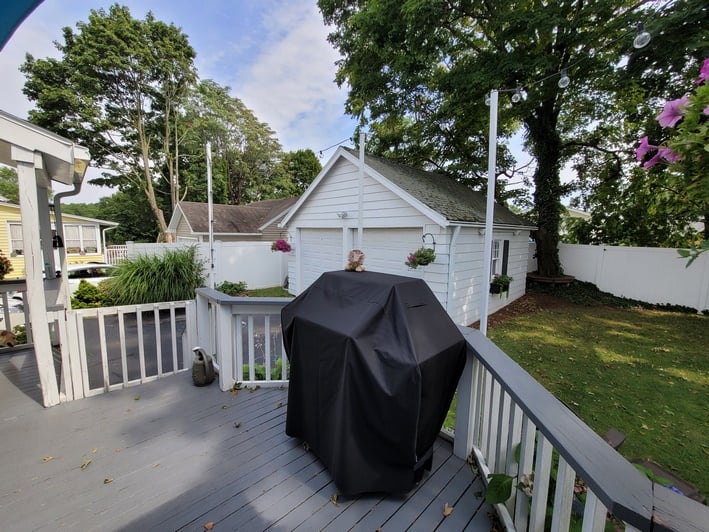 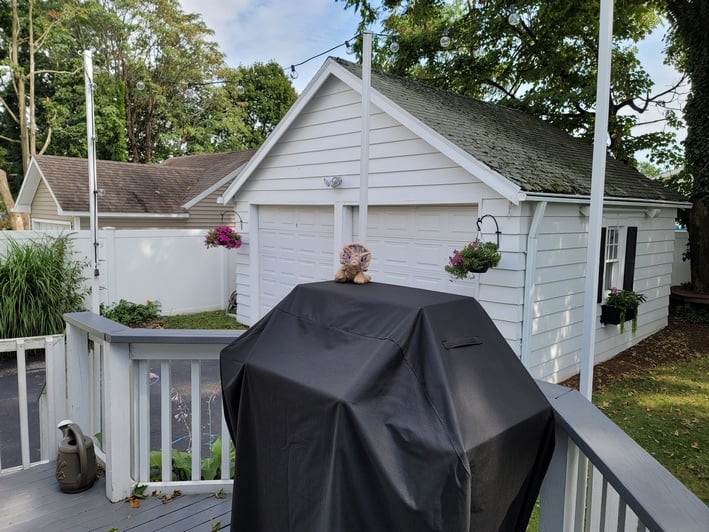 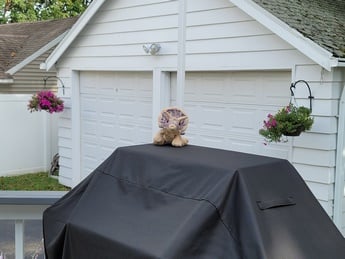 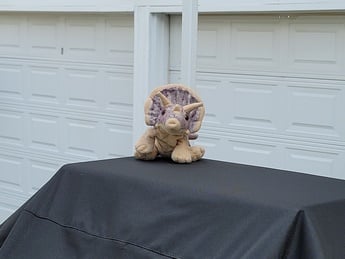 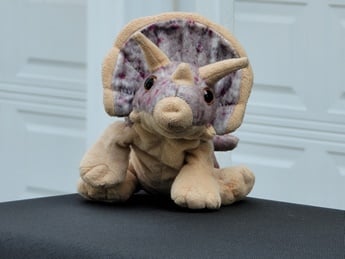 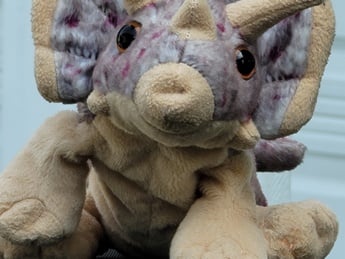 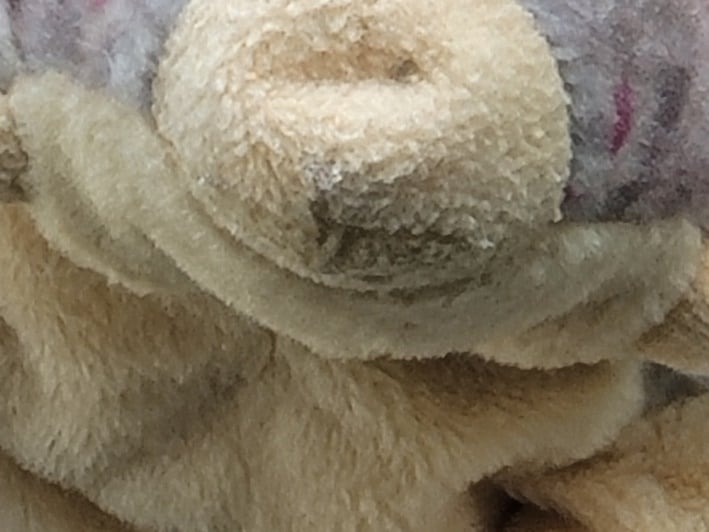 50x Super Zoom
By default, if you're using auto mode in the camera app and simply tap on the three camera options on the main screen, the Note 20 Ultra offers .5x (wide angle), 1x, 2x, 4x, 10x, 20x, and 50x zoom options. We run through all of those options starting from the top and finish with the 50x Super Zoom.

In these outdoor lighting conditions, the top wide-angle image shows some significant distortion and lots of purple fringing, especially around the outer edges. At 1x, our test subject -- Dino -- is more prominent and the distortion visible in the previous image is essentially gone. As we step through the different zoom option, things look relatively good, with good white balance and detail all the way on up to 10x. Once we hit the 20x mark, however, the image starts to look overly processed in our opinion. When zoomed all the way to 50x, Dino’s fur is so processed it almost looks as if it has been run through a water-color art filter. This is somewhat of a worst-case scenario though – expecting a tiny smartphone sensor to resolve ultra fine detail like fur using a digital 50x zoom is unrealistic. When the subject has sharper lines and less detail though, the results are better. 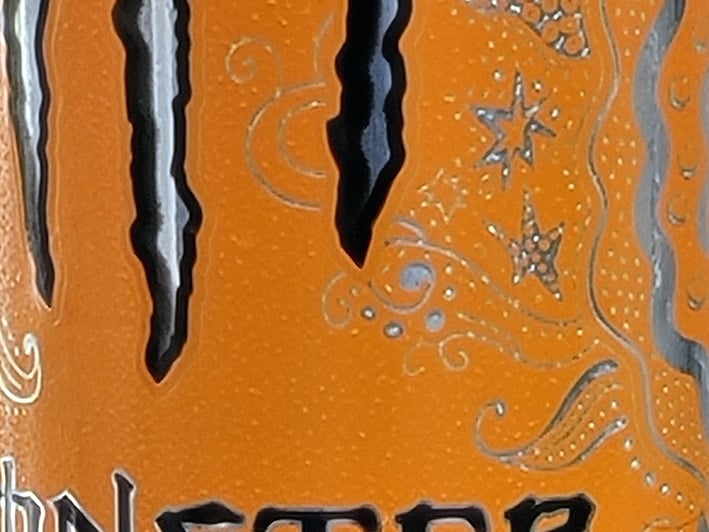 In this image, we replaced Dino with a can of Monster. The image still looks processed, but there is better fine detail, with sharper edges, and the subject is clearly discernable. All that said, when using the longer zoom modes, you'll definitely need to hold the phone perfectly still or use a tripod mount, to avoid blurring the image.