The latest version of Geekbench for Android has aligned its scores with the desktop version of Geekbench 5, which means we recently had to capture all new results. The data presented here shouldn't be compared to Geekbench results in some of our older smartphone reviews. However, we still have a pretty big cross-section of devices represented, so let's see how the Samsung Galaxy Note 20 Ultra fares versus some other high-end handsets... 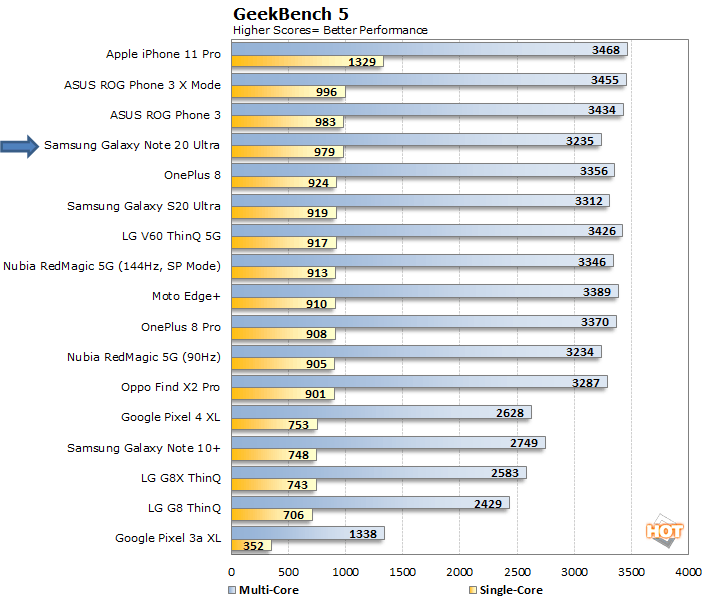 Versus other Android devices, the Samsung Galaxy Note 20 Ultra trails only the ASUS ROG Phone 3 in terms of single-threaded performance, though the iPhone 11 Pro comes out on top overall. In the multi-threaded test, however, the Galaxy Note 20 Ultra end up right about in-line with the Nubia RedMagic, despite the more powerful platform inside the Note. 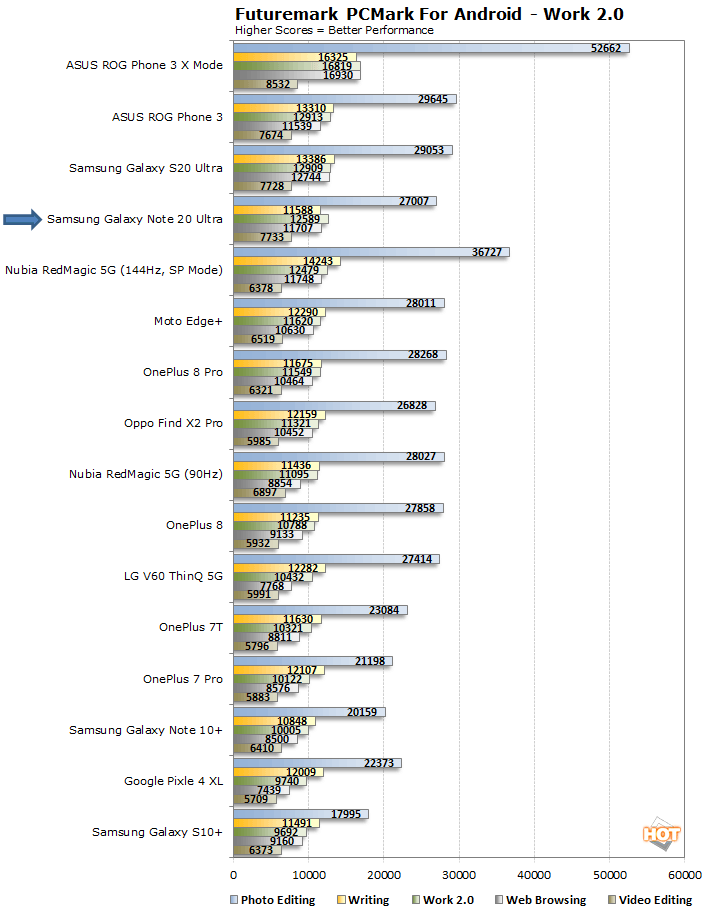 Surprisingly, the Galaxy Note 20 Ultra ends up trailing the Galaxy S20 Ultra here. The Galaxy Note 20 Ultra should be able to pull ahead of the S20, due to the former's use of the newer Snapdragon 865+ 5G mobile platform, but the Note 20 Ultra put up slightly lower scores than the S20 in all but the video editing test, which dragged down its overall score.
AnTuTu’s latest benchmark returns a number of metrics ranked with somewhat nebulous scores, rather than frame rates or time to complete. Here we're running the latest version of AnTuTu across an multiple Android devices. AnTuTu returns four top level performance results which are all included here: CPU, RAM, 3D, UX (or User Experience), along with a total score... 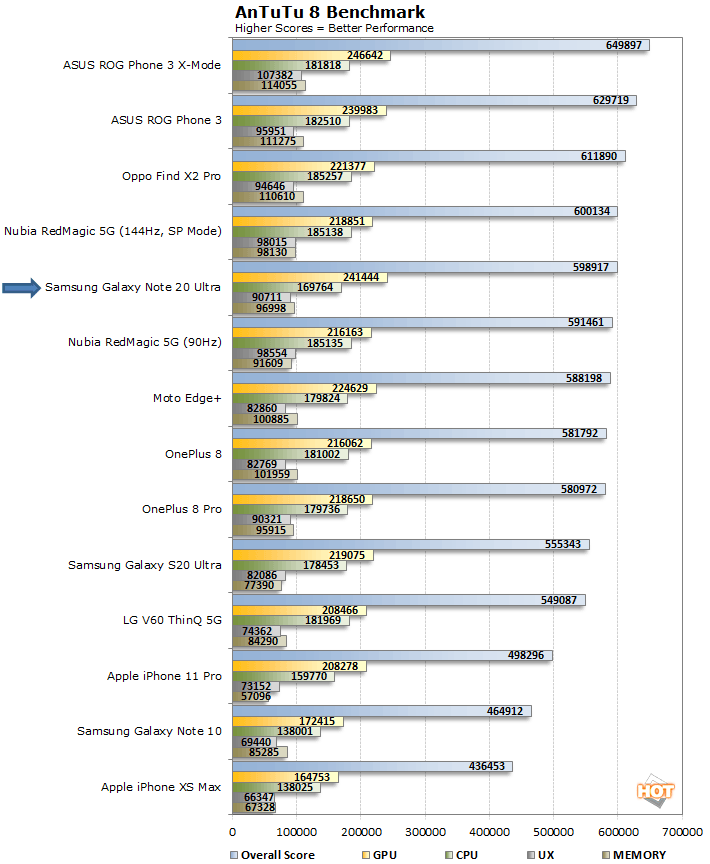 The Galaxy Note 20 Ultra fares a little better in the AnTuTu benchmark, besting all of the other Samsung devices, but ultimately trailing the latest ROG Phone, Oppo Find X2 Pro, and Nubia RedMagic 5G. 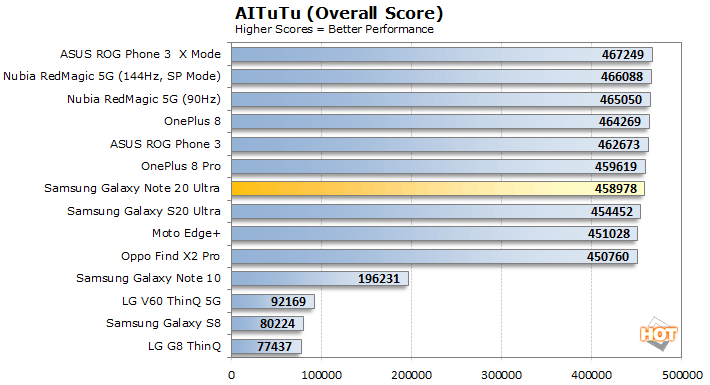 There's a relatively small delta separating the fastest and slowest of the Snapdragon 865 / 865+ powered devices here, but the Galaxy Note 20 Ultra technically ends up landing right in the middle of the pack.

Next up we'll focus on 3D performance using GFXBench and UL's 3DMark Sling Shot benchmarks. Since modern Android phones come with displays of all shapes and sizes, we level the playing field by looking at off-screen rendering performance. While that doesn't draw full-sized images to the screen and makes the benchmarks a little less fun to watch in the process, this does ensure that every phone gets the exact same task. These tests can be more challenging than most 3D games on Google Play, since most developers want their games to be playable for the vast majority of phones.

GFXBench has several scenes built in. The most well-known batteries are the T-Rex test and Manhattan. These tests are not quite as demanding as 3DMark Sling Shot (below), but we have a bevy of data to share showing the relative performance of many devices... 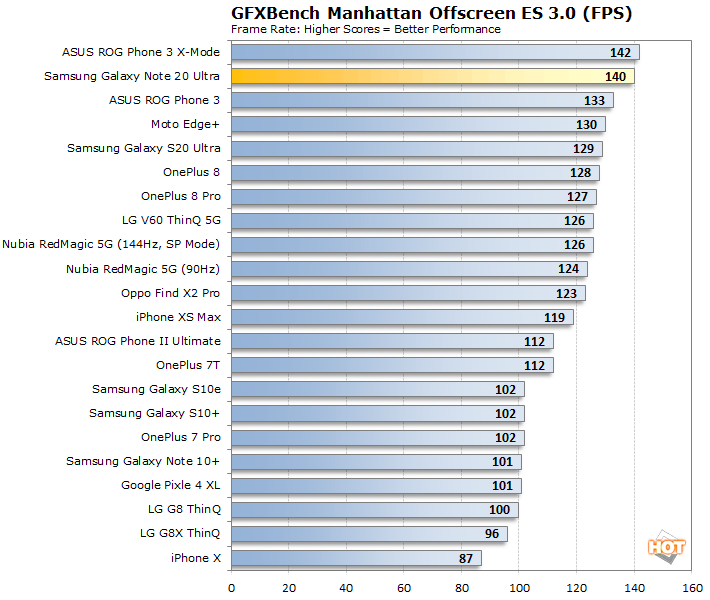 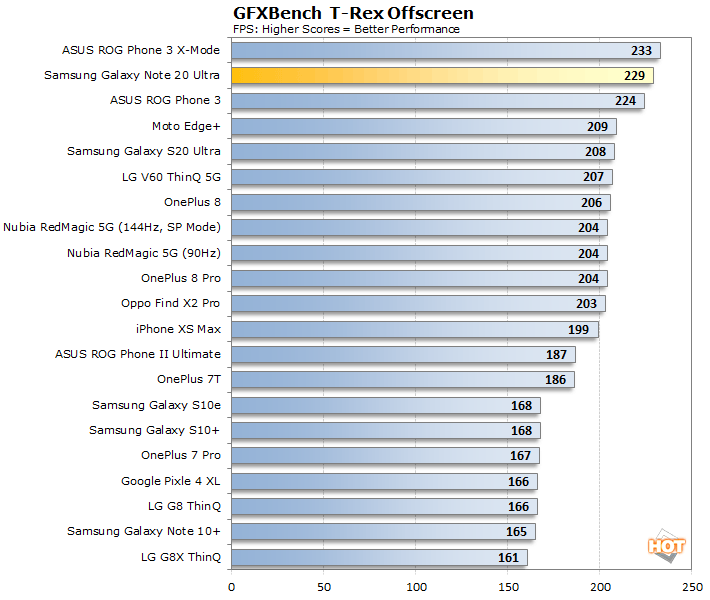 UL's 3DMark has been a staple 3D graphics benchmark at HotHardware across all mobile and desktop platforms alike. It seems that UL has retired Ice Storm, as that benchmark no longer appears in the application. However, we still have results for Sling Shot Extreme, which uses 1920x1080 off-screen rendering to test performance in its scene. 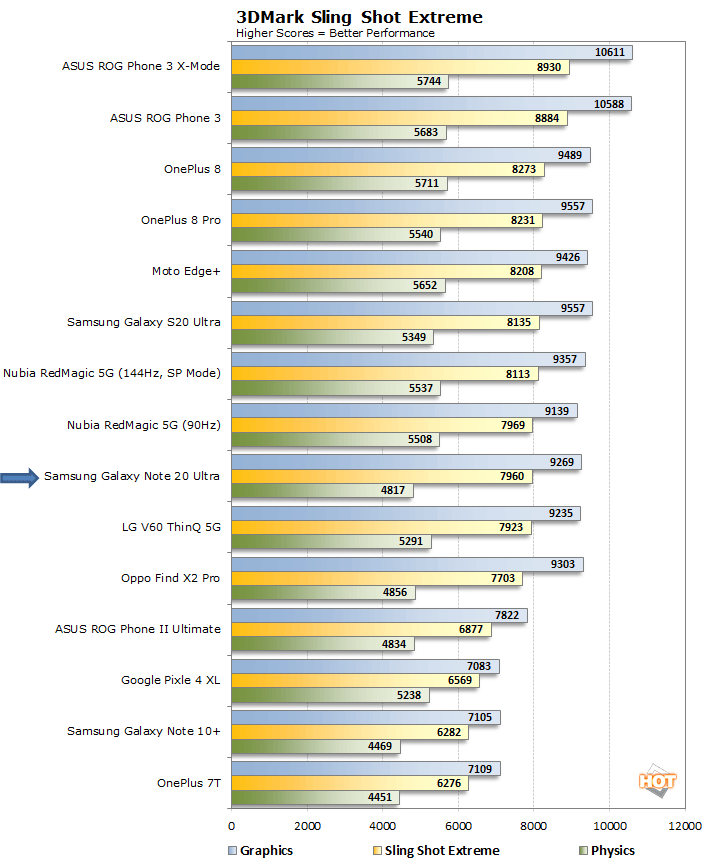 Although the Galaxy Note 20 Ultra performed exceptionally well in GFX Bench, it ended up landing in the middle of the pack, behind the Nubia RedMagic 5G in 3DMark Sling Shot. Still, the deltas separating the non-gaming phones are relatively small and the Note 20 Ultra is a strong performed in the grand scheme of things.