Performance Summary: The Motorola One Action is a midrange to budget level phone with a few tricks up its sleeve, and for the most part it performs like one. In productivity benchmarks, Motorola's device kept up with the somewhat pricier Google Pixel 3a XL. The One Action's four Cortex-A73 cores acquitted themselves quite nicely in web benchmarks (where the Pixel 3a was missing). In Geekbench, the Google and Motorola phones went toe-to-toe, and the same is mostly true with PC Mark. 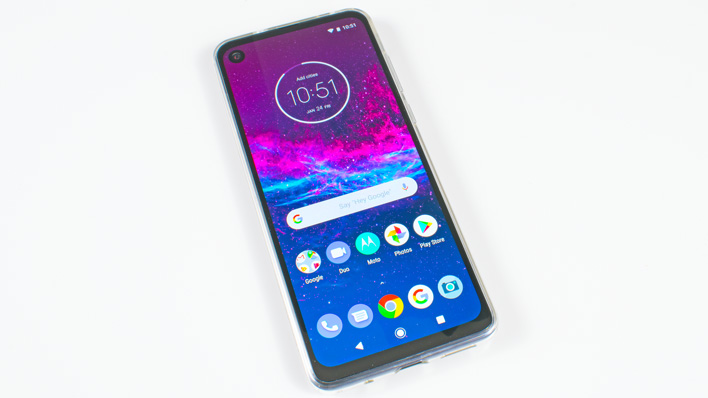 On the other hand, the One Action fell down pretty hard on 3D graphics benchmarks. Midrange phones aren't going to have the best mobile GPUs, to be certain. However, in GFXBench, Motorola's Android One phone could only muster half to two thirds of the performance of Google's budget Pixel. In 3DMark, that trend continued as the CPU-intensive physics test went pretty well, but the 3D game tests didn't keep up. That's all in spite of a perfectly playable gaming experience, since the majority of developers target Android games at the lowest common denominator—and in most cases, the Motorola Action One is still cut the mustard for light mainstream gaming.

The good news is that battery life on the Motorola One Action is pretty great. It bested the cheaper Pixel 3a XL by nearly 20 minutes while powering a bigger display and sporting a slightly smaller battery. Against other phones, it was an even bigger win. When considering the phone's relatively modest, non-jumbo sized battery, the One Action is even more of a battery champ.

Sizing-Up The Motorola One Action

Overall, the Motorola One Action is a very interesting and attractive device at the $350 mark. The phone's Samsung Exynos 9609 has the CPU chops to at least try and keep up with the current midrange frontrunner from Qualcomm, the Snapdragon 670 found in the Pixel 3a XL. There's also plenty of power efficiency on tap, as proven out by our PCMark Work 2.0 battery testing. 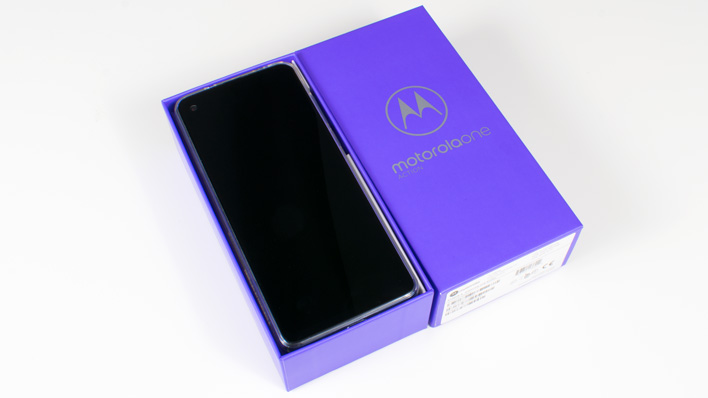 Many midrange (and even more expensive) phones can be ruined by lack-luster camera experience, but Motorola avoided that trap. The still photos captured by the traditional 12-megapixel rear camera and even the selfie shooter look pretty crisp and clean. They weren't as saturated or detailed as photos from the iPhone 11 Pro. Still, the color temperature was pretty solid and there was enough detail that you wouldn't be embarrassed to post its captures to social media. Smaller prints in the 4x6 range should even come out pretty well, too.

The One Action's namesake Action Camera takes really wide-angle video, and thanks to the Quad Pixel grouping on its 64 megapixel sensor, there's a ton of light and nary a hint of blur. For folks with a bent for the outdoors, the action camera could be a great companion to take to the park, on a run, or even to the beach. Just don't get it in the water or the sand; the lack of particle and water ingress protection here is a downer, unfortunately.

Conversely, Motorola promises great software support for this phone. Being part of the Android One program means that the One Action is built upon stock Android and should be good for two years of OS updates. Security updates run even longer, into the three year range. Many midrange phones don't get OS upgrades much at all, but the Pixel 3a XL is the main competition here. Google's phone gets a relatively long software support life, so we're glad that Motorola is up to the challenge as well.

Aside from the camera, other aspects of the One Action are enticing, too. The 21:9 1080p HD IPS display looks great at any viewing angle, although it's not the brightest in outdoor settings. The polycarbonate body looks great and feels premium. Finally, not only did Motorola endow the phone with a generous 128 GB apportionment of UFS 2.0 storage, but there's also a micro SD card slot for more. An while its single bottom-firing speaker is a bit of a disappointment, having a headphone jack when lots of flagship phones don't is great convenience for many users that want the flexibility of 3.5mm buds. 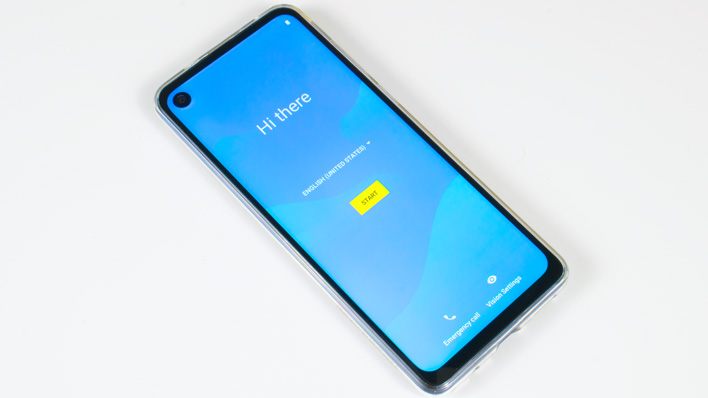 As far as pricing goes, it can even get better. Recently on Motorola's website it's been even more enticing and current sales have seen the price dip as low as $249 currently on Amazon. At that price, folks in the market for an inexpensive all-round decent performer and good battery life should definitely consider it. As it stands, we're awarding the Motorola One Action with HotHardware's Recommended award for its excellent battery life, solid construction, excellent (promised) software support, and a great entry-level price point