The Motorola One Action is a lower to mid-range phone, which presents a bit of a quandry: most of the devices we've tested over the last year are pretty high end and have price tags to match. The one exception to that rule is the Pixel 3a XL, which currently retails for around $450. That phone is very similar to the non-XL Pixel 3a, which runs the same $350 as the One Action.

All that means is that we expect the Motorola device to land at or near the bottom on the majority of our tests, but that's not really a problem since most of the other devices should absolutely get the performance their prices command. Where scores are available, the Pixel 3a XL appears on our charts, and that's where the real point of comparison lies.

Our first set of tests will focus on web and productivity tests. Browserbench's JetStream and Basemark's Web 3.0 tests use JavaScript and WebAssembly to work through a series of computational and real-world scenarios to see how the Exynos 9609's eight-core SoC and 4 GB of RAM perform. Just like all the other Android phones, we updated the Motorola One Action to the latest version of Chrome mobile prior to testing. 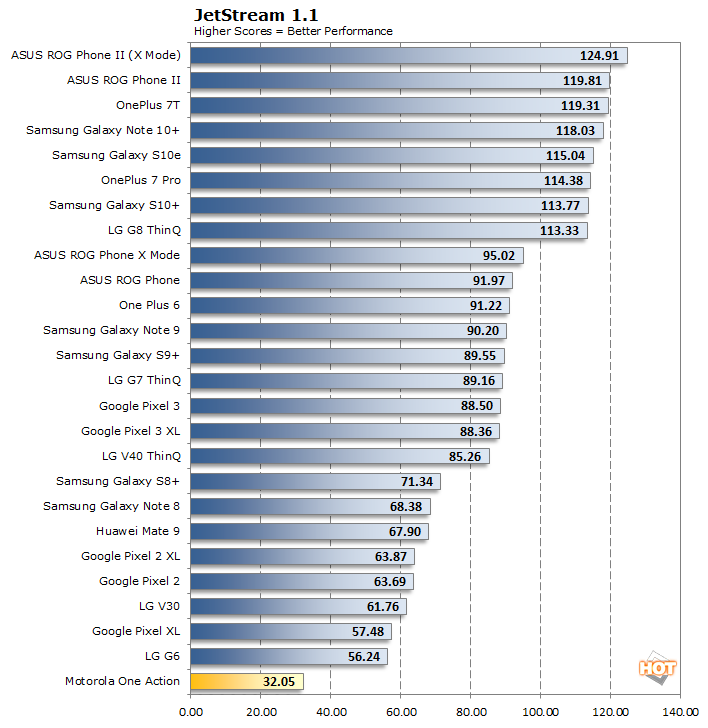 As expected, the Motorola One Action lands at the bottom of our benchmark listing. This phone's budget price and budget specs drive it down to the bottom. Still, we'd hoped for something a little better than half the performance 2017's flagship devices. JetStream is a computational benchmark, though, so let's see how it handles more real-world scenarios in Basemark Web 3.0. 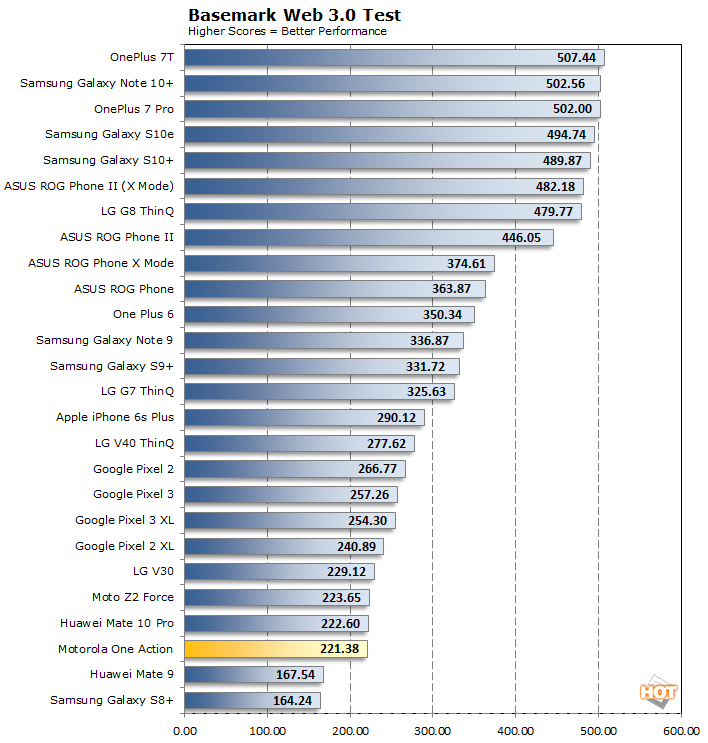 As it turns out, real-world scenarios saw a big performance uptick on the Motorola phone. The LG V30 and Pixel 2 XL are now much closer to the One Action's performance. Subjectively, browsing in Chrome feels pretty responsive overall, too. While it's not the fastest kid on the block, the One Action does happen to be the cheapest phone we tested, and with that in mind, performance is pretty decent. While you might be able to pick up a Pixel 3 for around the same price, that device has already burned through one of its three years of software updates, so the Motorola One Action should still get updates for longer.


The latest version of Geekbench has aligned its scores with Geekbench 5 on the desktop side, so as a result we had to capture all new results for this review. We've still got a pretty big cross-section of devices represented, though, so let's see how the Motorola One Action fares. 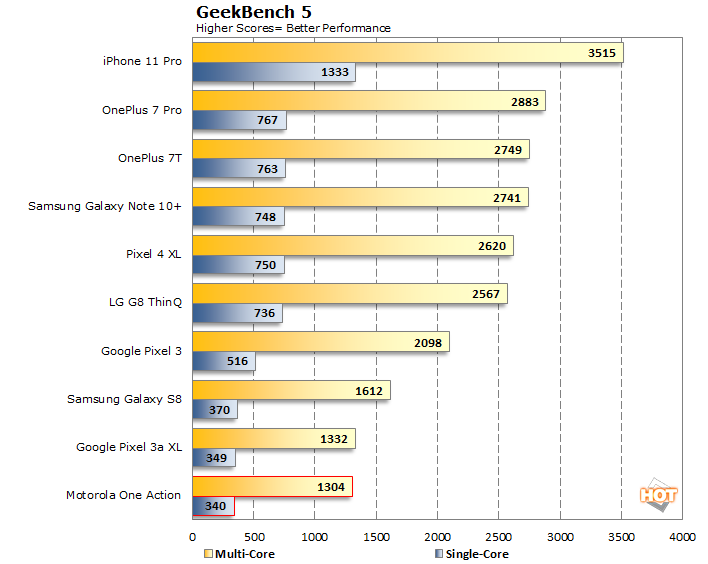 This is the first time our subject has met up with its direct rival. While the Pixel 3a XL ekes out a very slight victory, we can at least verify that the two devices are in the same ballpark from a performance perspective. This is true for both the single-threaded tasks and the multi-threaded tests in Geekbench. Overall, the Motorola phone's Samsung Exynos 9609 SoC acquitted itself nicely here. 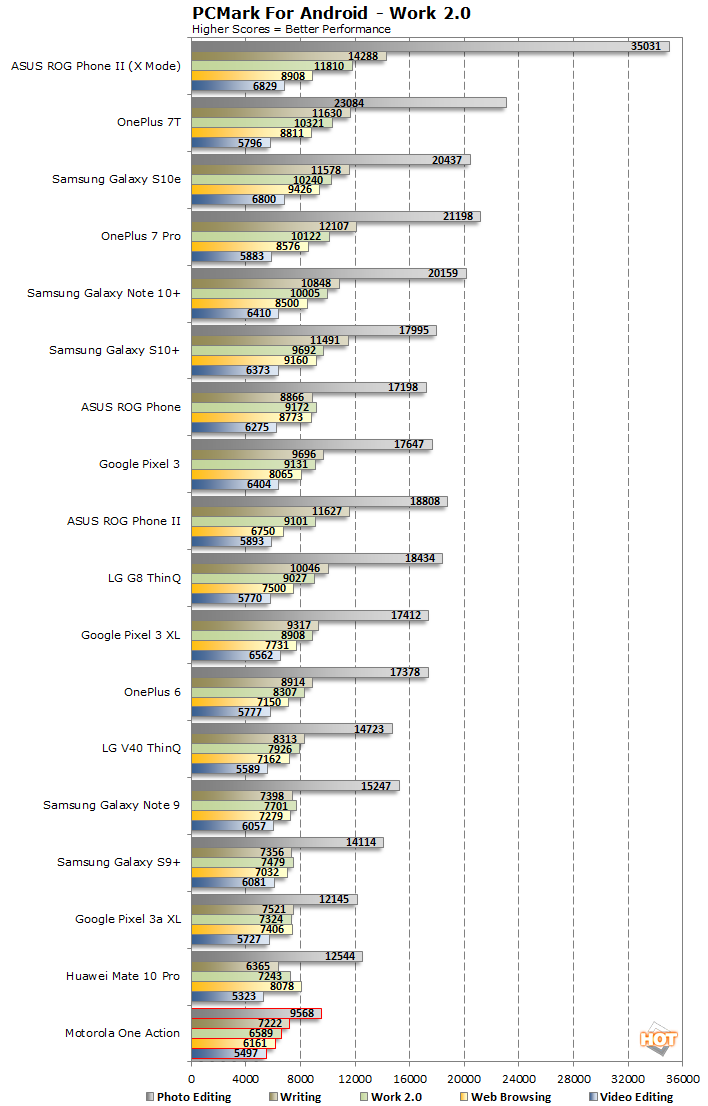 In the overall Work 2.0 test, the Motorola One Action falls around 15% behind the Pixel 3a XL. The Video Editing and Writing subtests are pretty similar between the two devices, but the One Action falls behind by 25% each in the Photo Editing and Web Browsing tests. While these tests are scripted, it's not as favorable a comparison on the performance front, for these similarly-priced phones.


AnTuTu 7 tests a variety of subsystems and returns a pretty elaborate set of data for each test. In this case, we tested with the latest version of AnTuTu across an all-Android platform group. AnTuTu 7 returns four top-level performance metric results that included here: CPU, RAM, 3D, UX (or User Experience), along with a total score. 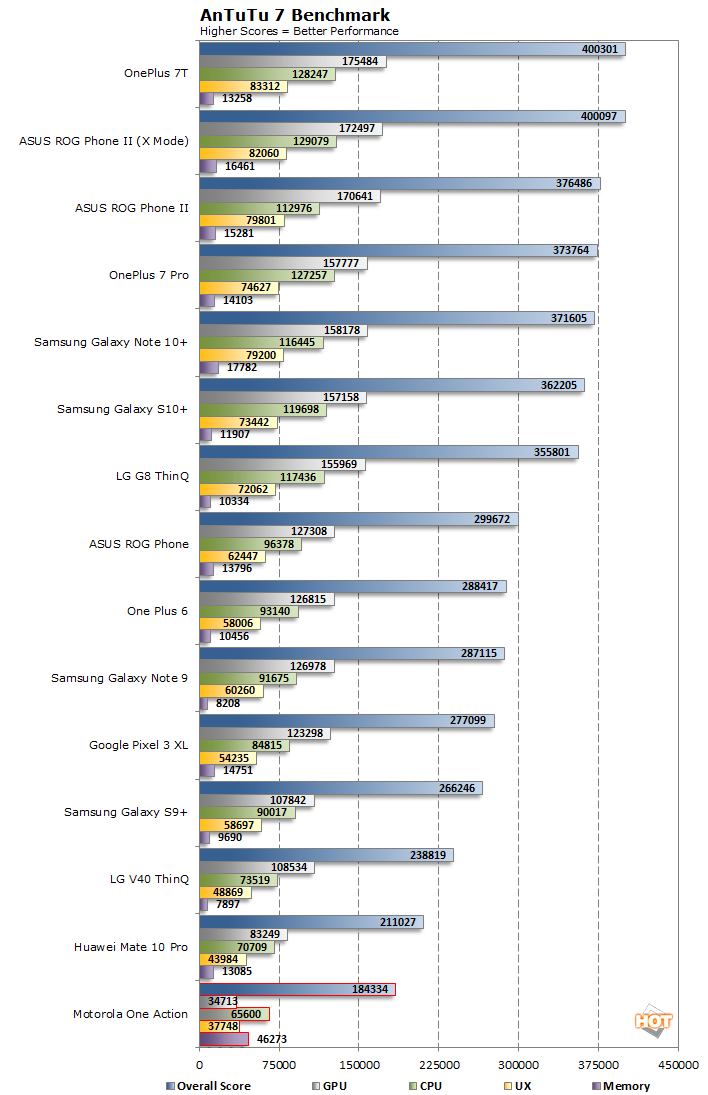 Again the Motorola One Action scores at the bottom of our group, which unfortunately doesn't include the Pixel 3a lineup. Oddly enough, the One Action returned the highest score among the tested phones in the Memory category, nearly tripling up on the next-highest score, the Asus ROG Phone II. That score persisted across multiple runs, too. The Motorola phone here does happen to have the only non-Qualcomm processor in the group. We're just disappointed this apparent advantage didn't manifest itself as greater actualized performance in other productivity tests.

Next up we'll see how the Motorola One Action handles 3D graphics processing.
PREV PAGE NEXT PAGE