Motorola One Action: Industrial Design And Android One

The design decisions that Motorola put into the One Action make a lot of sense. Gorilla Glass 3 covers the display, which protects the device from scratches and drops. However, the rest of the phone is not glass. Instead, Motorola used a polycarbonate frame and body, which keeps costs to a minimum. Since the One Action comes bundled with a clear silicone case, the phone probably won't get too scratched up.


We think the polycarbonate looks great;  the Denim Blue One Action review sample Motorola provided is deep and saturated, and looks as good in person as it does in the photo above. The fingerprint sensor bears a small Motorola logo, and a small blue-on-blue label displays the name of the device towards the bottom of the rear panel. Otherwise, the One Action is devoid of ugly branding. It catches the eye in a clean, understated way.

Unfortunately, the One Action isn't particularly water resistant. Motorola only rates it for IPX2 protection. The X in this Ingress Protection (IP) code indicates there is no protection against dust or other solid particles. The 2 means that the device is protected against dripping water at an angle of less than 15 degees off of vertical. This is the bare minimum, and a disappointment for a device with such a wide-angle camera. Don't take it white water rafting, though you could answer the phone while standing in a drizzle at least.

On the back of the phone, Motorola put the three-camera array in the top left corner, and a two-tone flash sits below that. We'll dive into camera performance later on, because the wide angle camera has some interesting features. In the center, the Motorola "M" logo holds a hidden fingerprint scanner for biometric authentication to unlock the phone and log into apps which support it. This is almost mandatory these days, even in a $350 phone, and Google did the same thing with the lower cost Pixel 3a last year. 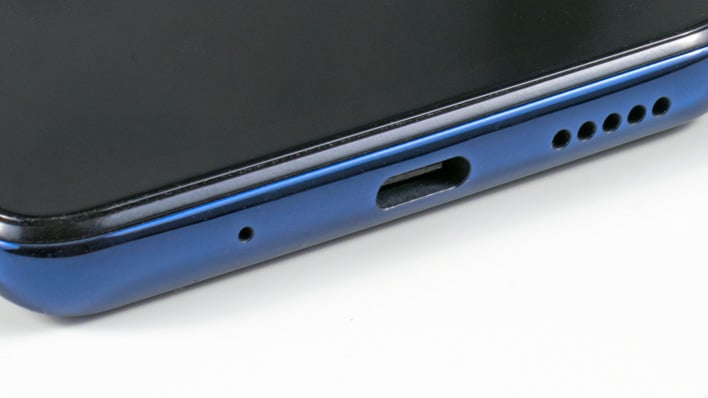 The bottom of the Motorola One Action hosts a USB Type-C port, however, transfers seem to be limited to USB 2.0 speeds, as pulling images and other files off the device never eclipsed 30 MB per second in our brief testing.

Flanking the port are the main microphone in a single hole on the left and the single loudspeaker on the right. The speaker can get plenty loud, though it's a little odd to have sound firing out the bottom of the phone and nowhere else. As far as quality goes, the speaker gets by for voice chats or watching quick YouTube videos, but it's certainly advisable to tether to a Bluetooth speaker, the car or similar for true audio fidelity.

In these photos we can see that Motorola didn't do much to hide the seams between the front and rear of the device. More premium devices like the Galaxy S10 and Pixel 4 do more to make the edge seamless, but this is one of many small cost-cutting decisions made that we're absolutely OK with. In fact, it could assist with future repairability as well. 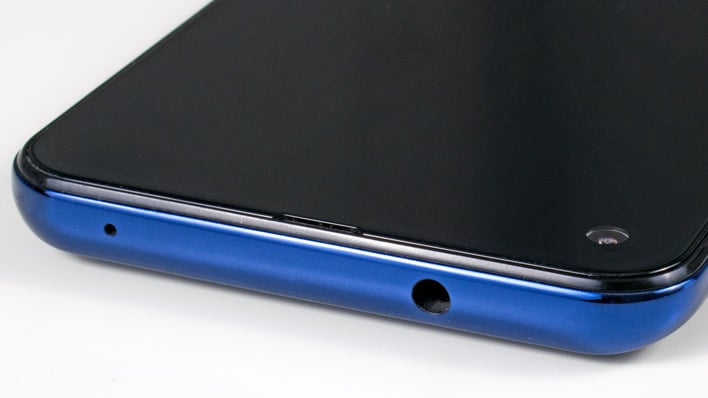 Around the top of the Motorola One Action we find a noise-canceling microphone and a standard four-pole headset jack. Putting that jack on the top of the phone is a curious move, we found that any time we took the phone out of our pockets with headphones attached, it was upside-down in our hand. We also had to take more care to rotate the headphone cable around the rear of the phone, or else it'd hang in front of the display. It's a minor inconvenience, but one that could have been avoided.

Motorola didn't include a headset with the Motorola One Action, but with its $350 asking price, we didn't necessarily expect that, either. Bundled headphones rarely sound great, anyway, and we're just glad Motorola included the port in the first place. However, since there are no stereo speakers on the phone, that's the only way you can get any left-to-right stereo separation.

The front camera sits in a hole-punch cutout in the display. Because of where the camera sits just below the edge of the panel, the Android status bar is fairly tall so that the cutout doesn't obscure the app that's on the screen. Curiously, we know that the One Action has a proximity sensor, but we couldn't see it anywhere on the front of the device. It doesn't matter much, however, since the screen dimmed every time we put the phone up to our ear. 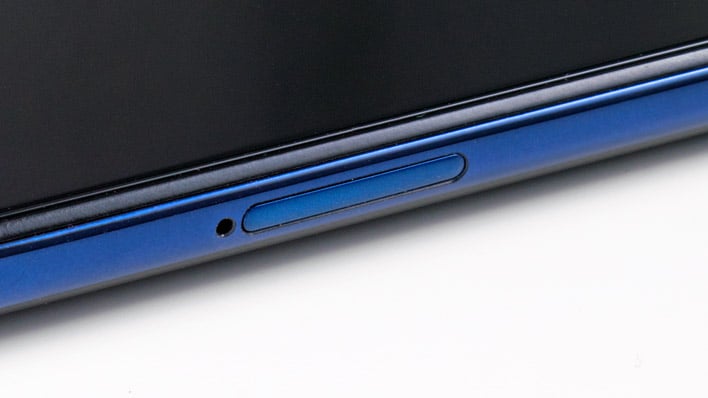 The SIM tray pops out with the press of a pin in the small hole beside it.

Around the sides of the phone are the power and volume keys on the left and a combination micro SD card and SIM tray on the right. The volume is a rocker-style single button. Just like most Android phones, holding the power and volume up keys takes a screenshot. Micro SD cards up to 512 GB are supported by the One Action, which is a great complement to the system's relatively generous built-in 128 GB of UFS 2.0 storage. We don't think many folks in this price range especially, are going to run out of room. 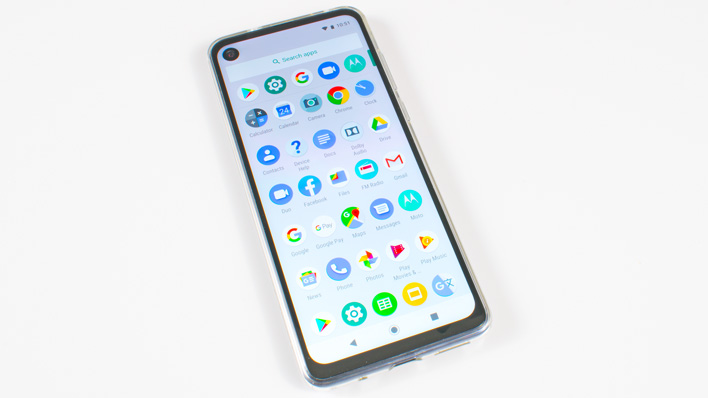 Running stock Android means that there's no bloat built into the One Action, and in fact, just about every app installed on the device fits on one screen in the app drawer. However, Motorola did bundle one very useful app: Moto Actions. Motorola phones are known for their wide array of supported gestures, and being part of Android One doesn't preclude the One Action from that. These gestures have been around since the original Moto X in 2013, and they're a key to how Motorola differentiates itself.


The Action Camera is limited to either 16:9 or 21:9 Full HD, but at least 60 fps is still an option for 16:9 videos. The wide angle lens has a full 117 degrees of horizontal view, which captures a large area without having to stand back really far from the action, much like a GoPro without having to hang on to a separate camera. This camera also has a magic trick: videos are always in landscape orientation with this camera regardless of how we hold the phone. The software accomplishes this by cropping the square 16 megapixel sensor differently depending on the phone's orientation when recording begins. We'd love to see this on more phones, actually. It's a simple yet useful feature.

Action Camera in vertical orientation
When holding the phone horizontally, the Action Camera's video fills the screen, so it's easy to see what the sensor picked up. When holding the phone vertically, however, the on-screen video was kind of tiny. For its intended use of strapping the camera to yourself or something else and capturing video as you do other things, this is not a problem whatsoever. More often than not, the Action Camera's target audience is too busy doing whatever it is they're recording to look at the screen, anyway.
PREV PAGE NEXT PAGE