Since the camera is the biggest selling point (outside the price) for the Motorola One Action, we wanted to make sure it could keep up with everyday life. Honestly, we made a pretty unfair comparison, since the only other current smartphone we had on hand was the iPhone 11 Pro. It's not necessarily fair to expect that a $350 phone's camera would keep up with a $1000 phone, but the lower cost Pixel 3a XL has a similarly high-end camera, and these days cameras are a huge part of the overall smartphone user experience. 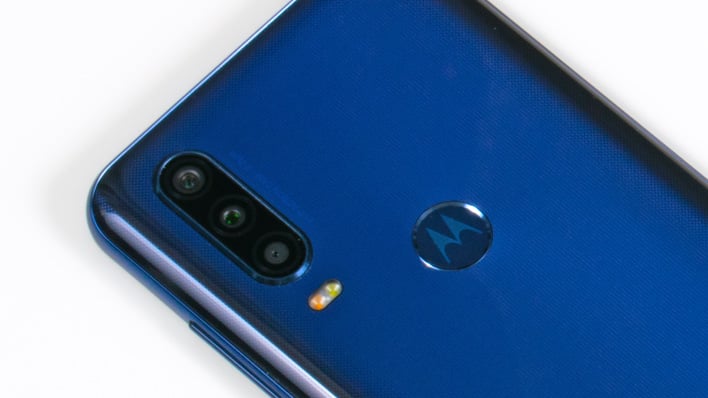 Cameras on the Motorola One Action

The Motorola One Family

On the other side of $350, the Motorola One Zoom takes all of the features on the One Action and adds a telephoto lens for a total of four rear cameras. That device has an MSRP of $449, $100 more than the model we have on hand. Lastly, the $399 Motorola One Hyper has a gigantic 64 megapixel rear camera that binds pixels into quads to improve low-light performance, resulting in 16 megapixel images. This is actually the same sensor that's under the Action Camera. Motorola used the same Quad Pixel grouping on both phones to capture as much light as possible. The difference is just a wider field of view on the One Action than the One Hyper, and the One Action's bigger sensor isn't used for still photos.

That's a whole lot of cameras and a bunch of different price points. It's unfortunate that these features couldn't be consolidated into a single device, but price constraints ensure that such a phone would be considerably more expensive.

Let's take a look at some photos from the One Action against the iPhone 11 Pro. 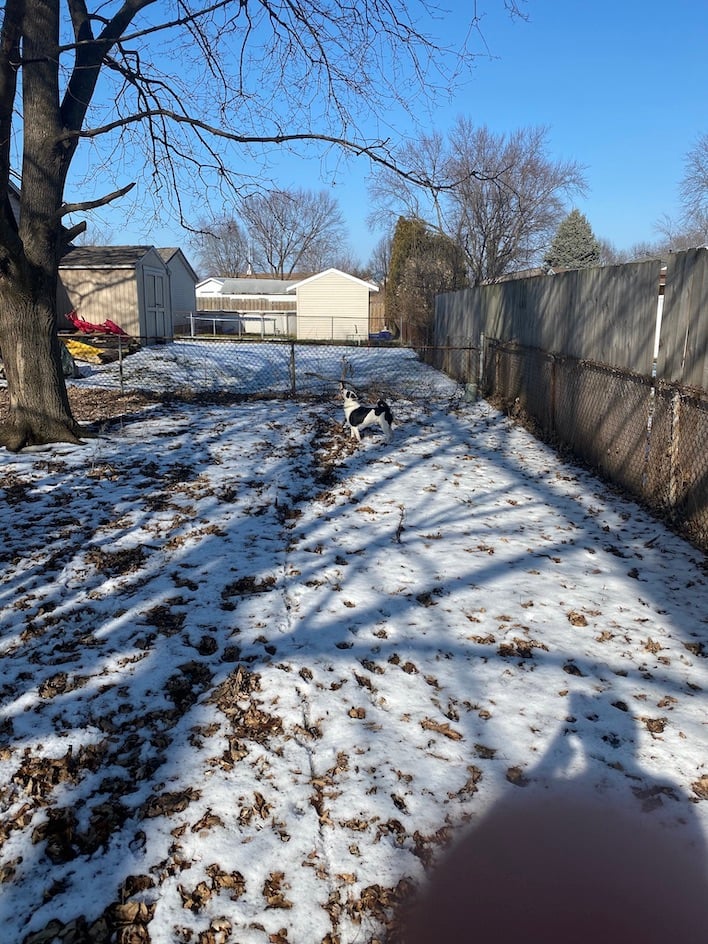 Outdoor photo on the iPhone 11Pro
Several things stuck out to us with outdoor photography; the first is the sky. Notice how saturated the photo is on the iPhone compared to the Motorola device. The second is the viewing angle. The Motorola One Action seems to be much closer to the action than the standard (non-telephoto) lens on the iPhone 11 Pro. We didn't move at all; both photos were taken from the exact same spot in the yard.

Lastly, while the phone was in the portrait orientation, the photos are still portrait photos. Apparently the Action Camera's trick that puts video in landscape while the phone is vertical doesn't apply to the standard rear still camera. In fact, when taking still photos with the Moto One Action, there's no option of using the wide-angle lense. The only photos we get are the ones from the main sensor.

It's hard to pick a winner here as there are aspects of both photos we really like. The One Action got up closer, while the iPhone had more vibrant color reproduction. You can click through the photos to see originals, but those originals have been resized to conserve bandwidth. The original resolution from both devices is 3072 x 4096, and both cameras did a good job of preserving detail.

We took a ton of pictures indoors, but we'll just take a small sampling of those here. Overall, we found that the Motorola One Action's camera had little trouble focusing on a subject and snapping a focused photo, even if that subject was on the move. For a nice portrait, we sat down with Barbara, my Pocket Pit Bull mix and she, smiled pretty for the cameras.

After that, we turned to a subjects that won't get up and walk away to see how the phones would handle stationary close-ups. 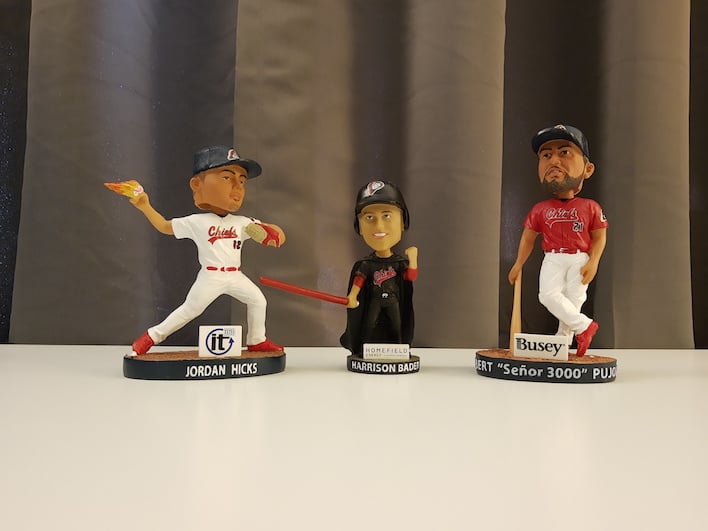 Albert Pujols and friends pose for the Motorola One Action 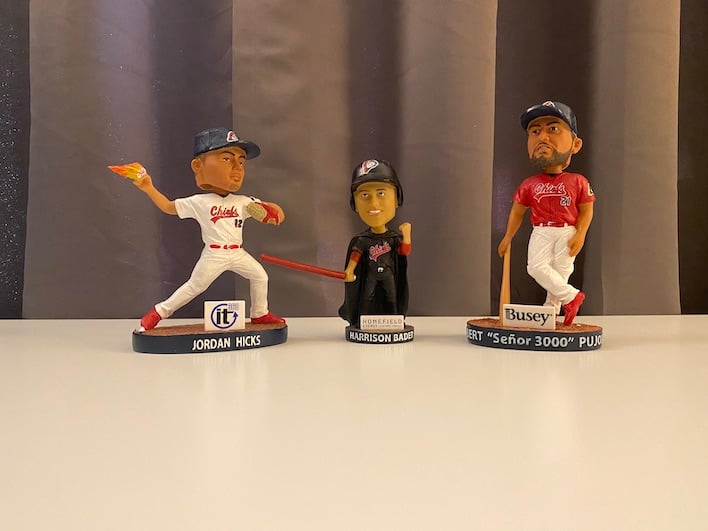 Indoors, the results are very different than the results we got outside. Both photos have some yellow to them due to the warm lighting in the living room. Upon closer inspection, we see that the colors on the bobbleheads themselves are once again more muted in the photos from the Motorola One Action. While the iPhone photos have a much more yellow cast to them, the red in the players' uniforms pops much more vibrantly than it does in the One Action's images.

Once again, the finer details seem to disappear in dimmer light, and it again seems the Motorola One Action pulled out a bunch of detail along with most of the noise. We do like the color temperature here, but that is easily fixed with a quick edit in Photoshop on the iPhone. Since you can't put detail back into a photo after it's gone, we have to award this round to Apple.

Next up we turned off the lights and re-shot the same scene. The only light in the room is what could penetrate our curtains.

While we were outside, it was time to put the wide-angle Action Camera to work. Since it doesn't handle still photography at all, we captured it on video. The camera can only capture up to 4K video at 30 frames per second, so we opted for full HD 1080p at 60 fps instead. Take a look at a sample in the video below.


YouTube compression adds a bit of noise, especially in the leaves, but overall we were pretty pleased with the Action Camera's results. Barbara loves to run all-out all the time, so she was the perfect subject for the Action Camera. The video we captured was clean and clear, even when the camera was moving, and Barbara is well-defined instead of a blur. Motorola's pitch is that anything one might want to do with a GoPro could be easily accomplished with the camera on the phone, and in this case it certainly seems possible. Considering this phone's $350 isn't that much more than the cost of just a portable camera, it did a pretty outstanding job capturing motion.

If you made it this far, there's just one more camera to go: the front-facing selfie camera. Unlike some recent Samsung flagships, there's no wide-angle front camera, so it's time to once again bust out the selfie stick for group photos.


Overall the selfie camera does a pretty good job. Much like the rear camera, the front-facing camera doesn't have a ton of color saturation, but the overall results are more than adequate for Instagram or video chats. We gave it a thumbs up.
PREV PAGE NEXT PAGE