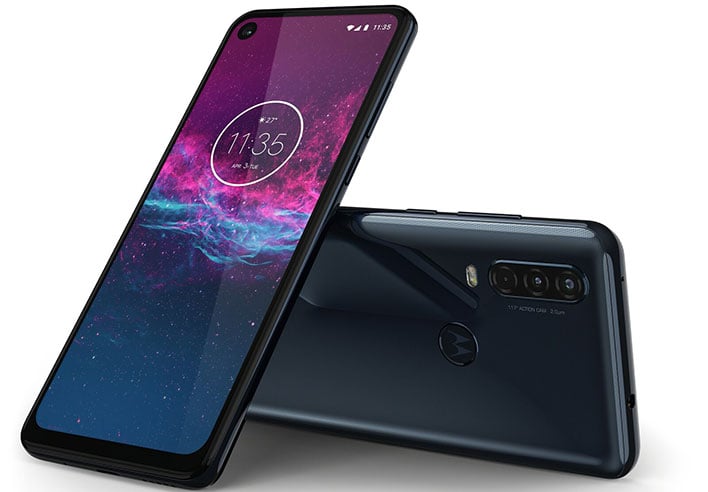 Motorola seemingly has a knack for knocking out excellent mid-range Android phones like the Moto G series and the Moto Mod-capable and 5G ready Moto Z3. With more and more entrants bringing good enough performance at affordable price points, however, it's getting harder for manufacturers to differentiate. Even the underlying platforms are mostly standardized these days, with SoCs coming from just a couple of big players like Qualcomm. What's a manufacturer to do to stand out in the crowd? That's what Motorola is striving for with its Motorola One family of devices, specifically today's entrant, the Motorola One Action. 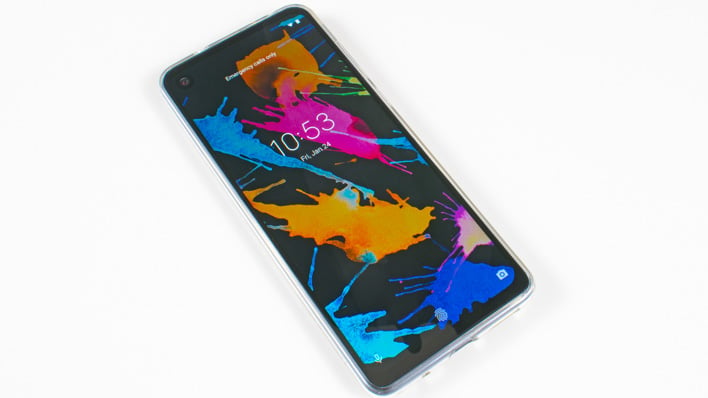 Motorola's One lineup consists of several entrants all with different camera configurations. The One Action has the typical front camera for selfies and video chat, rear camera for still photos, and a special wide angle "action camera" for video. The Action Camera that Motorola includes has a very wide viewing angle of 117 degrees, which is similar to the GoPro Hero 7's 118 horizontal field of view. The One Action might not entirely replace a waterproof, durable camera like the GoPro, but the best camera for the job is the one you have with you, as they say. Most folks rarely leave the house without our phones these days, so the Motorola One Action's primary selling point is that it's got you covered.

The best part about the camera isn't its specifications, though. Motorola's software crops the sensor so that video is always landscape, regardless of orientation. That means you can strap the One Action to yourself (or your dog, or anything else) and capture landscape video regardless of how the phone has to be oriented. Say goodbye to the limitations of the vertical view. 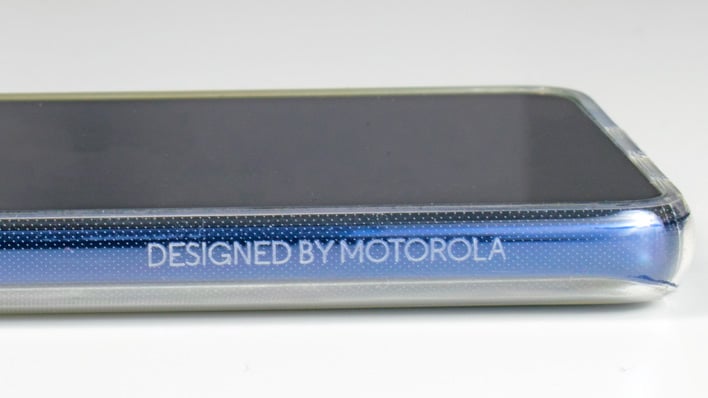 Motorola includes a clear silicone case with the One Action

We'll take a look at camera performance later on, but the ability to capture landscape video regardless of device orientation is unique and intriguing to say the least. How often have your friends or loved ones mangled an experience they're trying to share by posting video with huge black bars on either side? Friends don't let friends post vertical videos.


Motorola And Android One

Motorola has built a decently-sized line of handsets based on the Android One software platform. Android One is Google's attempt to make sure that affordable handsets get regular security updates and operating system upgrades. The Android One website lists more than 30 devices currently available in the program, with the Motorola One Active being among the latest. While the specifics are up to each manufacturer, Google says Android One devices can expect at least two years of OS updates and three years of security updates. In fact, when we unboxed the One Active, a system update was ready for us, bringing the phone up to December's security patch level for Android 9 Pie.

While three years of security updates is more than a lot of low end and mid-range phones ever have received in the past, Google itself competes in this area with the Pixel 3a lineup. Conversely, while all supported iPhones tend to cost quite a bit more than the Motorola One Active, Apple still supports 2015's iPhone 6s and 6s Plus with software and security updates. That means even on the lower end of the phone spectrum, users have come to expect longer software support life, and we're glad to see this trend continue with the Motorola One series.

But we digress, let's see what this phone is made of... 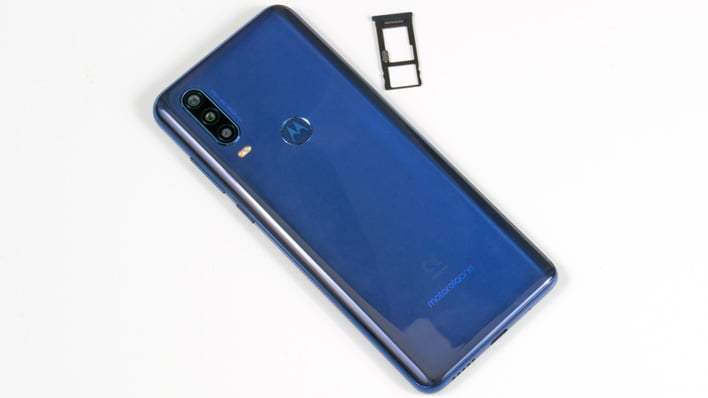 Unlike a lot of budget and midrange phones, the Motorola One Active sports a Samsung Exynos 9609 system on a chip (SoC) as its processor. This chip has four Arm Cortex-A73 CPU cores for high-performance computing tasks and a quartet of low-power Cortex-A53, which totals eight cores in a traditional big.LITTLE configuration. This setup should give plenty of performance for typical smartphone social media, web, and business apps.

For memory, the Motorola One Action has 4 GB of LPDDR4x memory for main system RAM. That should be plenty for most folks, but heavy multi-taskers will probably find that apps suspend and restart more often than they do on phones with a lot of RAM like the Galaxy S10 or Galaxy Note 10. Those phones pushed upwards of $1000 at launch, however, so we should keep the One Action's $349 MSRP, and killer current sales price of $249, in proper perspective. For storage, this Motorola phone has 128 GB of Flash which uses the UFS 2.0 protocol. 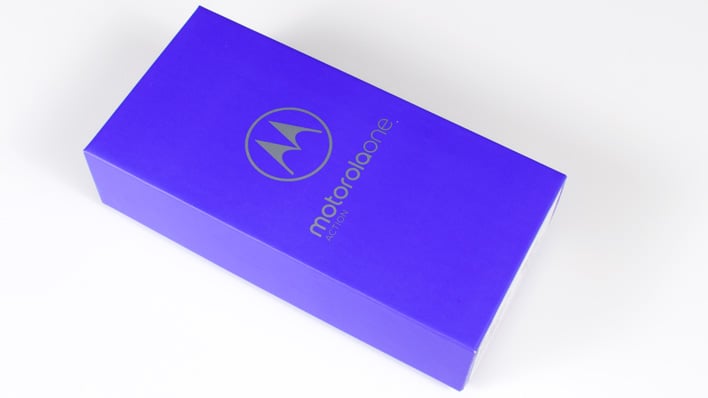 The Exynos SoC's included Mali G72 MP3 graphics processor handles display duties and drives the 6.3" 21:9 display, which is good for a screen to body ratio of 84%. The native 2520x1080 resolution of the screen works out to a pretty high 432 pixels per inch density. Unlike a lot of smartphones, the One Active has an IPS display. That means there's no chance of burn in and the viewing angles are solid, but there's a lower contrast ratio on tap since OLED panels can shut individual pixels off entirely for a deep, true black.

The rear has a trio of cameras, as we mentioned before: the 12 megapixel sensor handles photos and normal video while the bigger 16 megapixel shooter handles wide-angle action videos. There's no way to take photos with the wide-angle camera on the One Action, which is a little disappointing for folks who like to take photos of sunsets or of their progeny playing sports. Around front, a single 12 megapixel camera handles selfies and video chat. Like all current Android devices, the One Action handles video chat with Google Duo, Facebook Messenger, and just about any other platform you can think of, as long as you don't think of Face Time.

The One Action's cellular radio can handle 3G and 4G LTE bands for all four of the biggest carriers in the US, so it doesn't matter if you're on Verizon, AT&T, T-Mobile, or Sprint, the unlocked version of the phone should work on your favorite network. For local area connections, the Motorola One Action supports 802.11ac, and the Exynos chipset also supports Bluetooth 5.0, including the audiophile-friendly Enhanced Data Rate protocol. 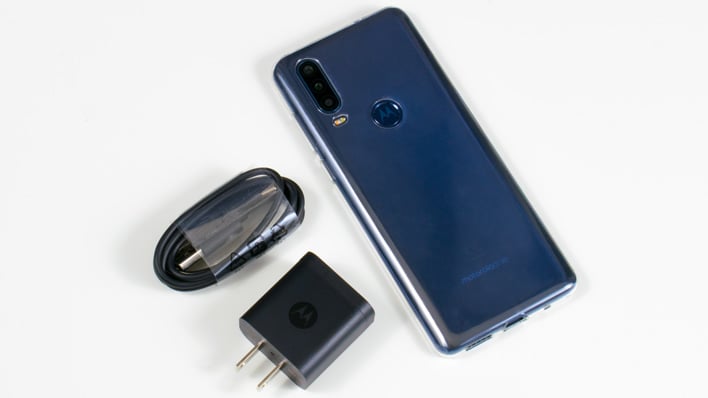 As far as accessories go, the Motorola One Action comes bundled with Motorola's fast-charging 10 watt charger. After our battery test completed, we were able to get the battery back to 50 percent in just a half hour, though like most phones the charging rate tapers off the closer the battery gets to full. There's also a USB Type-A to Type-C charging and data cable, and a clear silicone case to protect the One Action from drops and scratches. Sometimes it can be hard to find quality cases for cheaper devices, so we appreciate Motorola bundling such a case here.

Next up let's take a look at the Moto One Action's design, ports and software experience.
NEXT PAGE