We primarily tested the AT&T-branded LG Velvet on the carrier’s low band 5G network (850MHz, n5) in and around San Francisco, and the unlocked device -- which lacks 5G for the US -- on AT&T’s 4G LTE network in the same Bay Area locations. Reception and calls were problem free, and data speeds were on par with other AT&T devices. Obviously, T-Mobile’s version will support low band 5G (600MHz, n71) and Verizon’s model has mmWave. 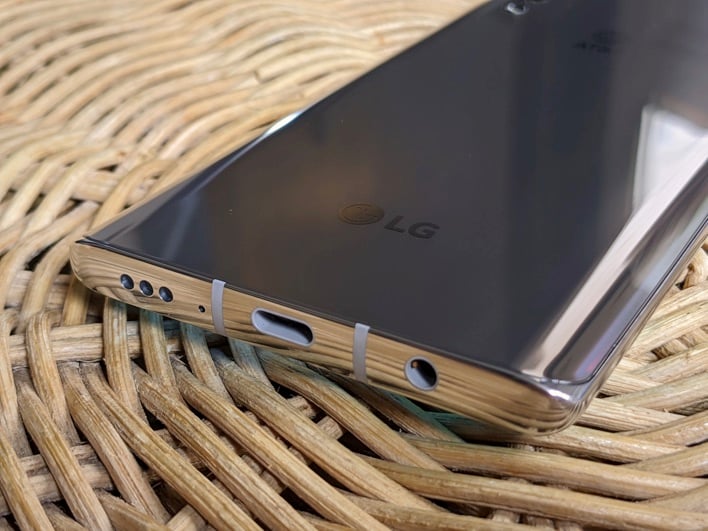 The Velvet has stereo speakers (earpiece on top and edge driver along the bottom), which sound decent but don't particularly stand out. It’s the headphone jack we were more excited about, until we realized that it’s missing ESS’s superb 32-bit HiFi Quad DAC and headphone amp. For some reason, LG decided to omit this from the Velvet. As such, the 3.5mm output is fine, but it’s nothing to write home about.

Like the OnePlus Nord, the Velvet is powered by Qualcomm’s Snapdragon 765G chip with built-in 5G. LG combines this with 6GB of RAM (8GB is some markets outside the US), and 128GB of UFS 2.1 storage -- expandable via microSD (up to 2TB). While the Velvet is about as quick in most day-to-day tasks as some 2019 flagships, it isn’t as responsive as the Nord. The display’s 60Hz refresh rate certainly feels less smooth.

Still, we have no complaints. The Velvet juggled all our productivity apps with aplomb, including a brief jaunt in Super Mario Run while on a Skype call. Sure, it’s not going to run 3D-intensive games as well as a flagship, but that’s not what this phone is about. Our benchmarks (below) confirm this, putting the Velvet between the OnePlus Nord and Google Pixel 4a in terms of performance. 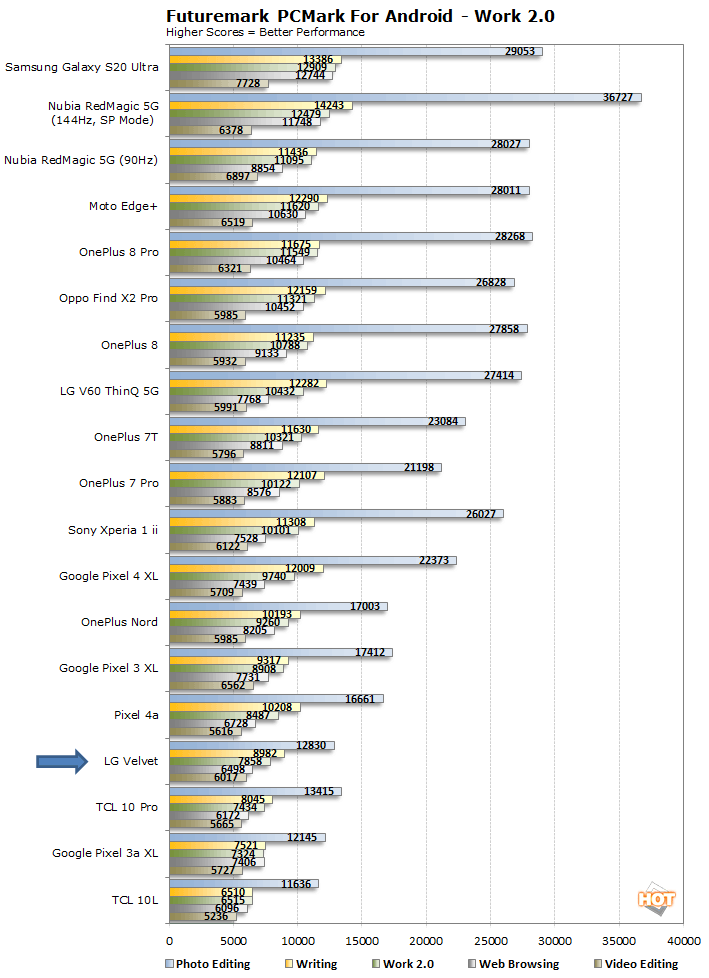 We were expecting the LG Velvet to score close to the OnePlus Nord, but for some reason, it scores just below the Snapdragon 730G-equipped Pixel 4a. While the Snapdragon 765G powering the Velvet clearly doesn't match the performance of current flagships for the workloads used in PCMark for Android, these results are still respectable. 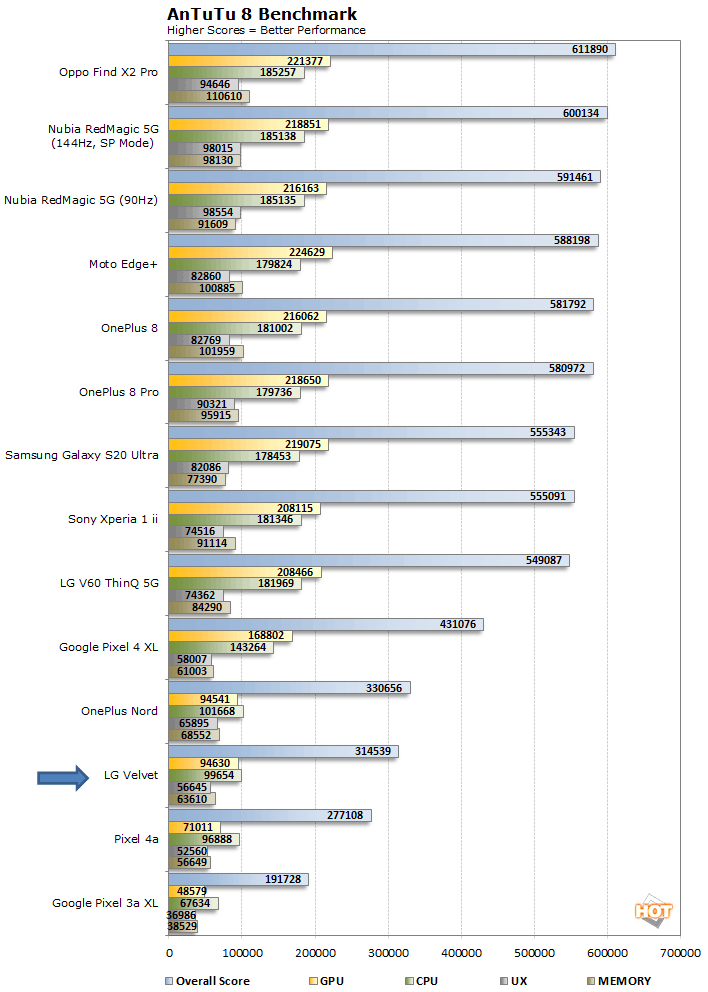 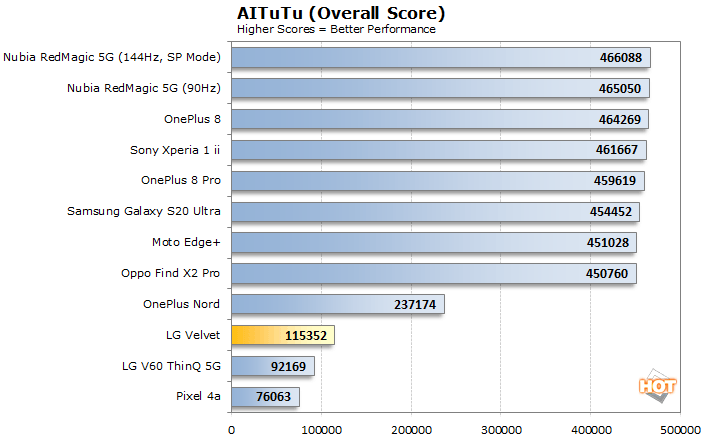 LG has clearly done a decent job optimizing AI workloads on the Snapdragon 765G. In AiTuTu, the Velvet actually scores better than the Snapdragon 865-equipped LG V60. Strangely, that's less than half what the OnePlus Nord scores. LG likely hasn't implemented the necessary libraries to fully accelerate the workloads in AITuTu in dedicated hardware. 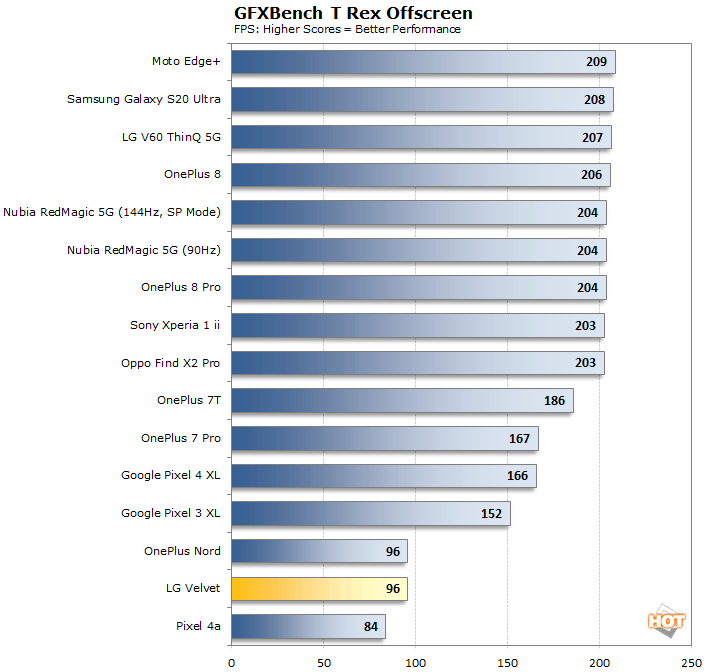 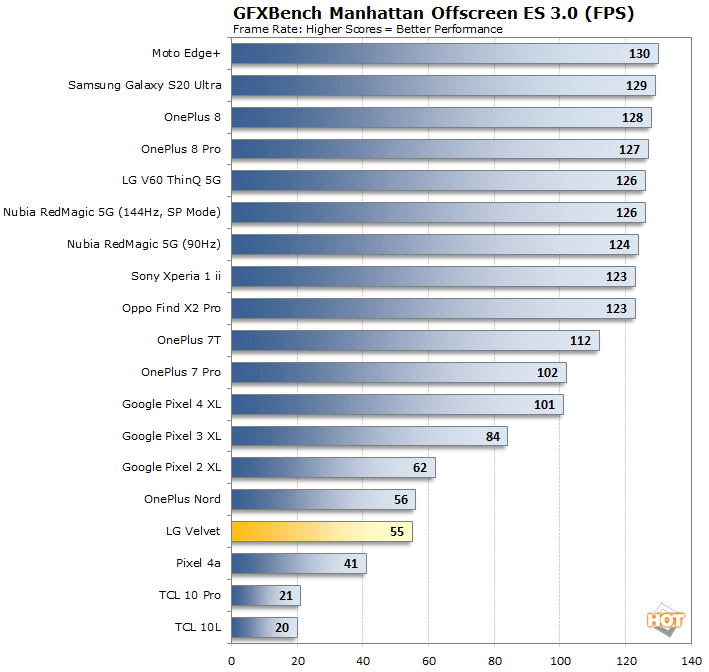 Graphics performance clearly isn't the Snapdragon 765G's strongest suit. Here, the LG Velvet's scores are almost identical to the OnePlus Nord's and consistently slightly less than half the scores of current flagships. 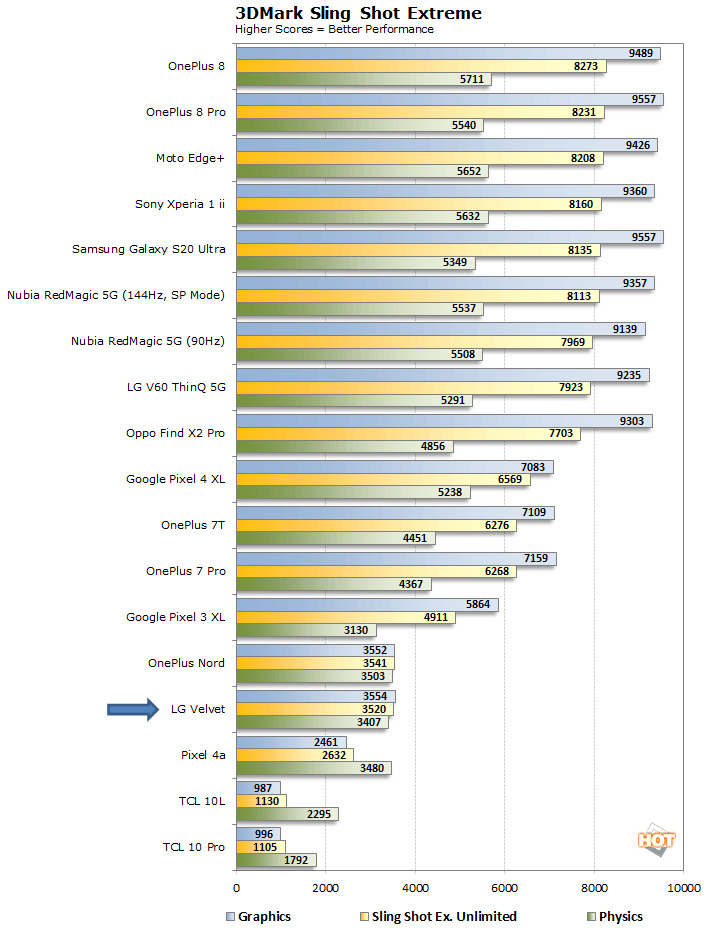 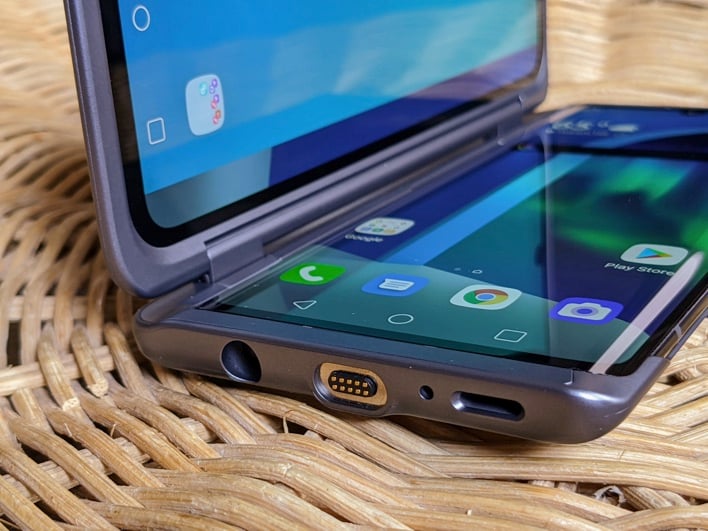 With a slightly larger 4300mAh cell and slower 60Hz screen, the Velvet should beat the OnePlus Nord for battery life. And indeed, it looks pretty solid. Unfortunately, our PCMark’s battery test kept crashing, but with 60% battery left after 5h49 screen-on time, we’re confident the Velvet will last a full day or more. When it’s time to recharge, it supports fast charging up to 25W (Quick Charge 4.0+ and PD 2.0), plus Qi-compatible wireless charging up to 9W.