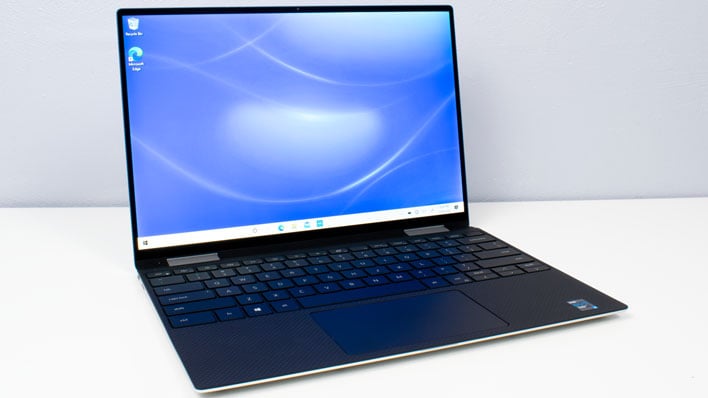 Intel's 10-nanometer Tiger Lake processors have one of the fastest CPU architectures available in Windows notebooks today. That's not to say they've got the fastest overall CPUs, though. There are competing mobile processors available with more cores and support for additional threads that are better suited for complex, multi-threaded tasks. It does, however, mean that right now Intel's single-threaded performance in Windows notebooks is king. It only makes sense, then, that Dell would want to bring Tiger Lake to its XPS 13 2-in-1 family as quickly as possible, because fast single-thread performance translates into a snappy, response experience, which is something everyone wants.

The world's biggest privately-owned PC maker has done just that, too. Dell's website is full of New XPS 13 notebooks and 2-in-1s with Intel's latest and greatest CPU family inside. Besides that, the 2-in-1 model in particular has undergone some subtle, but appreciated design changes. The XPS 13 family has long been one of the best and most popular premium ultraportable notebook lineups around. Does this new model continue that tradition of success? Let's meet the new Dell XPS 13 2-in-1 and find out... 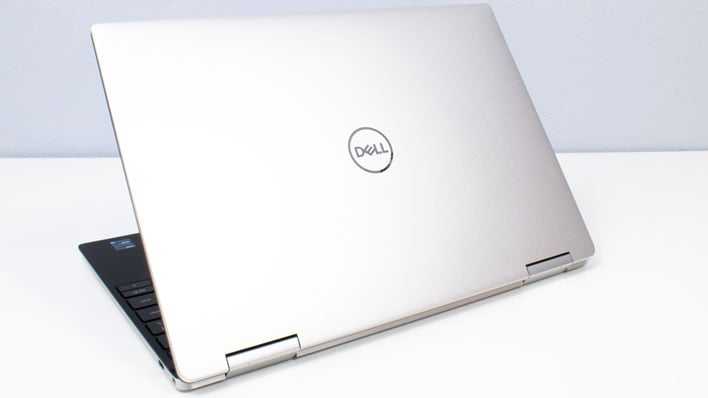 As we indicated earlier, the Core i7-1165G7 here comes from Intel's Tiger Lake family of processors. Its four cores and eight hardware threads (thanks to Hyper Threading) have a relatively pokey 1.2 GHz base clock, which roars all the way up to 4.7 GHz for a maximum turbo clock. The G7 portion of its name indicates that Intel's most robust Iris Xe integrated graphics processor handles graphical duties. All of that shares a 12 MB L3 cache, and pulls from the same pool of 16 GB of soldered LPDDR4x-4267 memory.

Not only is the memory soldered, but like other XPS 13 2-in-1s, the primary storage is attached to the motherboard, too. In this case it's 512 GB of flash storage connected via NVMe over four lanes of PCI Express 3.0, so it should be pretty speedy. The soldered nature of both the memory and storage means that buyers should get as much of both as they think they'll need at the time of purchase since upgrades aren't possible down the line. The XPS 13 2-in-1 also has a Killer AX1650 Wi-Fi card that supports 802.11ax Wi-Fi and Bluetooth 5.0 to round out its internals.

Externally, the XPS 13 2-in-1 is encased in a lovely machined aluminum shell with a carbon fiber palm rest and Corning Gorilla Glass on the display. Every surface we can touch exudes its premium build quality and feels great in the hand. Dell says that while the footprint is actually smaller than last year's 2-in-1 (which we reviewed here) the display is actually a bit bigger at 13.4". That's because the bottom bezel is smaller than the previous generation, although it's not so thin as to make it difficult to hold in tablet mode. It's quite comfortable, and weighs in at just 2.9 pounds. 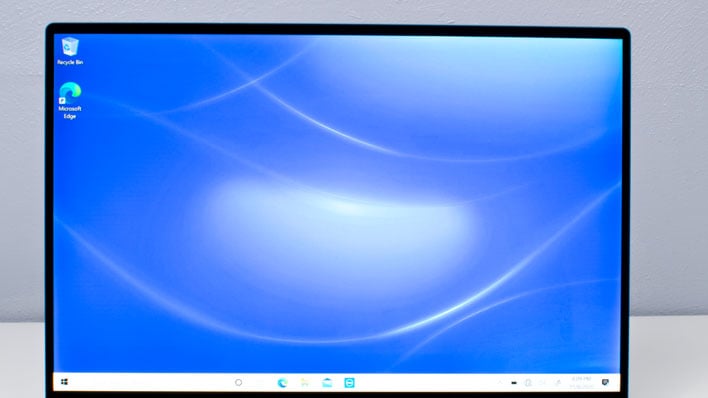 The display itself is a 1920x1200 IPS panel with a 16:10 aspect ratio. That resolution adds some very welcome vertical real estate over most of its 1920x1080 competition. If that 164 DPI pixel density isn't tight enough, Dell also offers an option 3840x2400 UHD+ display with a razor sharp 328 pixels per inch. As it is, the default panel on the model we received looks great with saturated colors and a maximum brightness of 500 nits.

However, as nice as the display is on paper, there is one issue we need to disclose with our Dell notebook test unit. There is a hint of backlight bleed visible on our review model when the brightness is turned up, and that's visible in the lower half of the display in the photo above. Once the brightness is down to a more indoor-appropriate level (around half on the brightness slider) this issue seemingly goes away. It isn't all that distracting in normal use, but watching a dark video with a high brightness setting does bring it out into plain view. 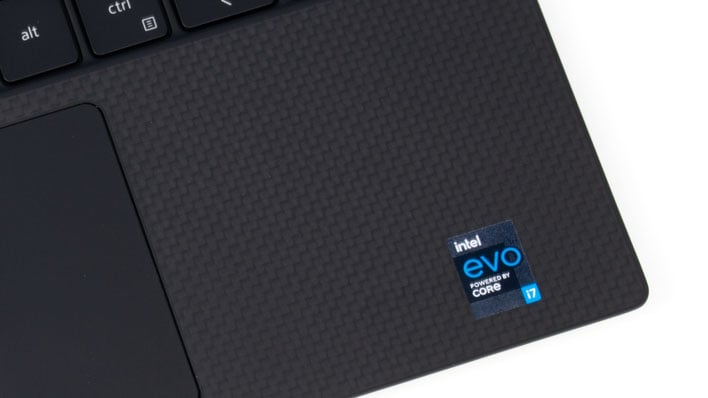 Despite this shortcoming of our particular review sample, the display is still nice to look at. It supports 100% of the sRGB color space, 90% of the wider DCI-P3 gamut and sports an 1800:1 contrast ratio. Viewing angles are a wide 178 degrees. Thanks to the 500 nit maximum brightness, it supports HDR 400, and the display also carries Dolby Vision certification. Despite its glass surface, the panel rejects a lot of reflections thanks to an anti-reflective coating, and manages to fend off some fingerprint smudges thanks to an oleophobic layer, as well. Dell gave the panel Eyesafe blue light filtering technology to relieve eye strain too.

Because of its 2-in-1 nature, the hinge flexes a full 360 degrees, so that the keyboard wraps around the back to be held in tablet mode or propped up on a table in tent mode. There's a built in rotation sensor so that the system always knows its vertical orientation and the image is never upside-down. That means it's ambidextrous in tablet mode and just as comfortable for lefties or righties. Exhaust vents are built into the two hinges, with intake slits on the bottom of the chassis, so we never ended up blocking the fan vents with our hands, regardless of how we held the system. 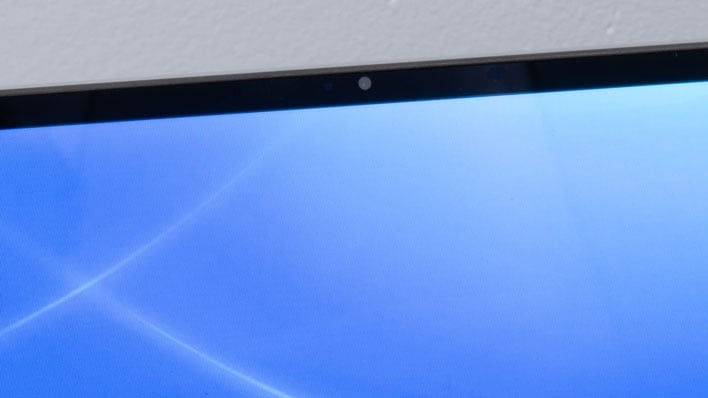 Above the display is a 720p HD webcam with a built-in infrared sensor. This allows facial recognition in Windows 10. There's also a fingerprint reader built into the power button for those who prefer that method of authentication. Windows also supports using both in tandem, if you so choose. The image from the webcam is good enough for video chats, but we're starting to wonder if manufacturers will ever move up to 1080p, as 5 MP to 8 MP sensors are common in front-facing phone cameras. To be clear, that's not just Dell, since just about every notebook we review is saddled with low-resolution cameras, but it's 2020 and external webcams are in short supply. Upgrading the webcam would compliment the rest of the XPS 13 2-in-1's premium components, and seems like a great way to differentiate a high-end notebook from its competition.

Thanks to the webcam and the pair of noise-canceling microphones that flank it, web conferencing works pretty well overall. Callers could see us on screen and hear our voices just fine. These microphones also support far-field Cortana access, and we could ask questions of Microsoft's digital assistant from across the room. The people we talked to over Skype sounded pretty nice, too, thanks to a pair of stereo speakers tuned with Waves Maxx Audio. Due to their small size, the bass response is weak as you would expect, but there's a four-pole combination headset jack should you want to use a better set of cans, with or without an integrated microphone. 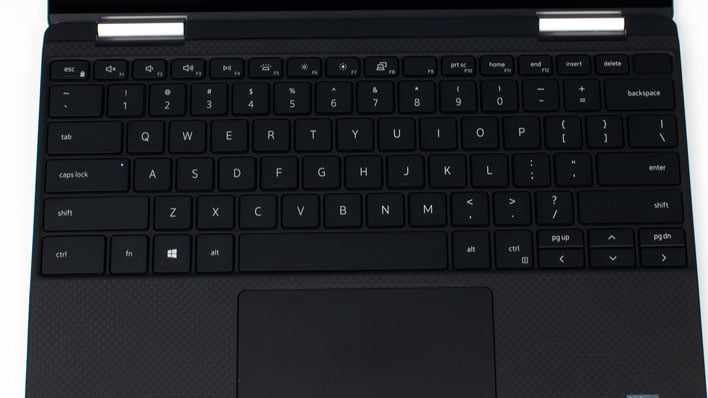 The XPS 13 2-in-1 has a MagLev keyboard and its keys have 1.3 millimeters of travel. MagLev is Dell's name for magnetic levitation, where the keys on the keyboard float above the key switch because of repelling magnets that push them upward. The typing sensation on this style of keyboard is different than most, as the keys are satisfyingly tactile almost like typing on a mechanical keyboard with linear switches like Cherry MX Red. Key travel isn't anywhere near as long as the Cherry switches, of course, but the sound of the keys bottoming out against their magnets feels pretty good and typing was a breeze. Because the keyboard itself spans the full width of the notebook, keys are large enough that we didn't fumble around too much. This review was produced on that keyboard, so we definitely gave it a good workout.

Below that and surrounded by a sea of carbon fiber on the palm rest sits a generously-proportioned track pad. While Dell doesn't publish its exact measurements, our caliper tells us it's 4.1 inches wide and 2.65 inches tall. There's plenty of surface area for getting the pointer around the screen, and the pad supports all of Windows 10's multi-point gestures like scrolling, app switching, and window management. Combined with the 10-point touch sensor on the screen, there's no shortage of ways to handle inputs. 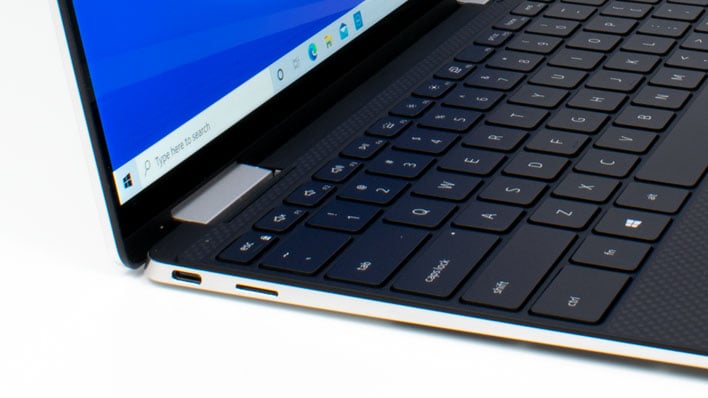 For connectivity, Dell gave the XPS 13 2-in-1 as many ports as it could fit into the slender body. That is limited to just a pair of Thunderbolt 4 ports, one on each side of the chassis. Those multi-use ports with Type-C connectors support USB and DisplayPort as well, and each XPS 13 ships with a Type-C to Type-A adapter in the box. Dell also sells a variety of single-plug docks that include external Ethernet, USB 3, and display outputs, too. The left side of the XPS 13 2-in-1 also has a microSD card reader, and the right side hosts the combination headphone jack. Beyond that, there are no other ports on the notebook. 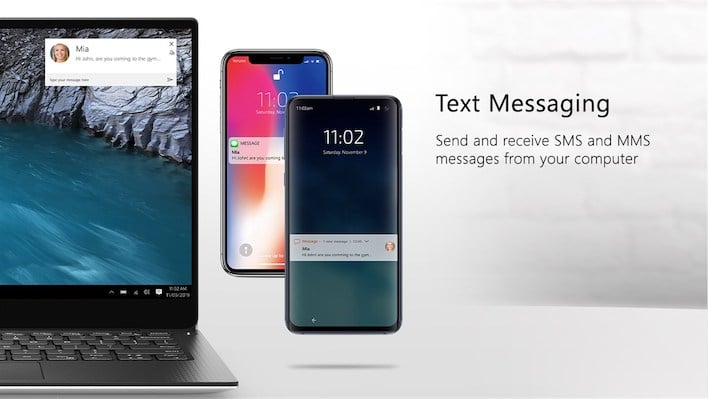 The XPS 13 2-in-1 ships by default with Windows 10 Home, although Windows 10 Pro is available as an upgrade. Dell includes a variety of useful utilities including Dell Mobile Connect and Dell Power Manager. Most of the other preinstalled software is a result of either the Windows 10 installer (such as Candy Crush and the Microsoft Office app) or related to hardware inside the machine, like Intel's graphics drivers. Overall the XPS 13 2-in-1 has the same clean Windows experience we've come to expect from premium notebook vendors.

Mobile Connect is a very useful app that overlaps somewhat with Microsoft's own Your Phone app. It supports getting notifications, making calls, sharing the screen, and sending SMS messages on Android devices connected over Wi-Fi. However Dell's app goes the extra mile and supports the same features on iPhones, too. That kind of integration with iOS devices is a huge part of the Mac experience, and the fact that Dell could bring it to its own Windows PCs is a big edge for iPhone users that want to use real computers (heyooo!) instead of Macs. 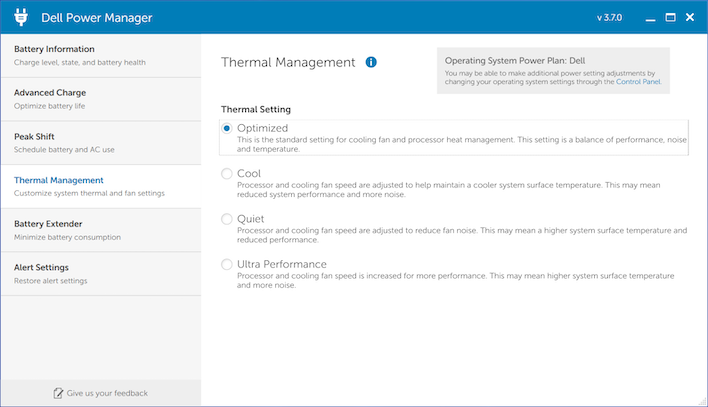 Dell's Power Manager app isn't overly exciting to look at, but it can show battery health statistics and make changes to the fan profile. Being able to customize the fan goes a long way towards either making the XPS 13 2-in-1 a totally silent notebook or unlocking the most performance possible. The default fan profile, as we'll discuss later on, is pretty quiet and shows some good performance, but its Ultra Performance mode can unlock a whole other level of performance, depending on whether the work is a sustained, heavy load or a short, burst-heavy task. Ultra Performance should allow the system to work at its peak performance for a longer period of time, and we'll put it to the test in our performance rundown on the next page.

Now that we've gotten to know the XPS 13 2-in-1 a bit, let's see how it handles our benchmark suite...
NEXT PAGE