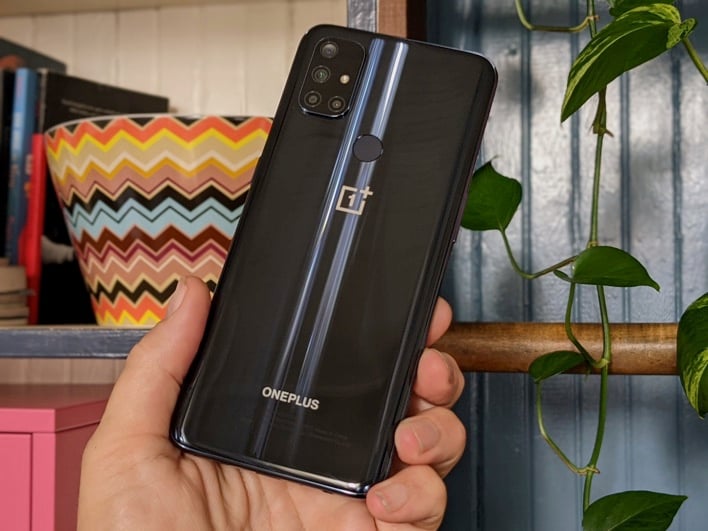 It’s been a busy, transformative year for OnePlus. After releasing the $699 OnePlus 8 and $899 OnePlus 8 Pro flagship back in April, it launched the €399 OnePlus Nord mid-range device in July, and the $749 OnePlus 8T in October. We were very impressed with the Nord, but it wasn’t destined for our shores. OnePlus promised to remedy this by introducing a variant of the Nord for the US market, which brings us to today’s phone.

Behold the €349 ($415) OnePlus Nord N10 5G. It’s a completely different 5G handset from the original Nord that swaps the Snapdragon 765G for a Snapdragon 690, and the 6.44-inch AMOLED screen for a 6.49-inch IPS display. OnePlus sent us a European review unit ahead of the US release, and we have our takeaways posted on the pages ahead. So, how low can OnePlus go before it loses its mojo? Is “Never Settle” still relevant? Read on to find out...

The OnePlus Nord N10 5G’s design has more in common with the OnePlus 8T than the original Nord. It inherits the 8T’s camera pod shape and placement -- a black rectangle containing an LED flash and quad shooters in an L-shaped layout. Gone is the Nord’s pill-shaped dual-selfie camera cutout in the top left corner of the screen, replaced instead by a standard punch hole for the 16MP front shooter.

But that’s where the similarities end. Switching from OLED to IPS means no optical in-display fingerprint sensor and larger bezels. As such, the N10 5G comes with a classic rear-mounted capacitive fingerprint scanner and a rather unsightly chin below the screen. This, along with the plastic mid-frame and rear panel, make the N10 5G look and feel lower-end than the 8T -- or even the original Nord. It’s a bit of a letdown, unfortunately. 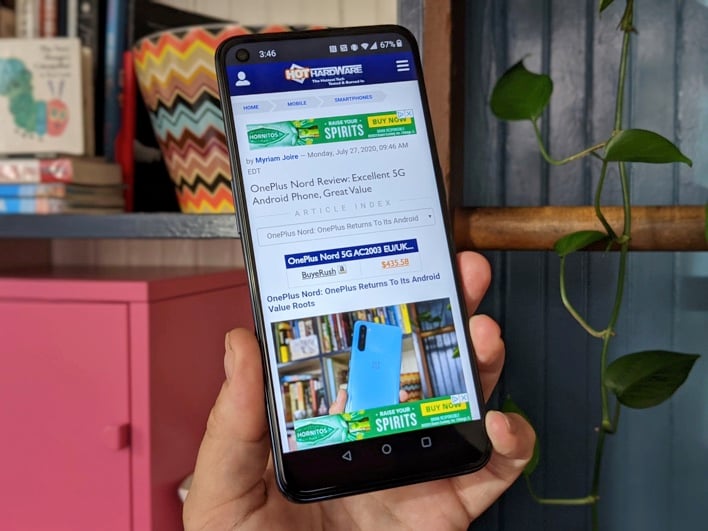 While the N10 5G comes in a single dark color (Midnight Ice) that’s shimmery and attractive, the slick faux-glass back is quite the fingerprint magnet, and it is hard to keep clean. But despite all the plastic, this phone is well made and comfortable to hold. After all, it’s just marginally larger (163 x 74.7 x 9mm) and heavier (190g) than the Nord. Overall, though, the N10 5G just lacks that modern, premium, OnePlus vibe typical of its other devices.

The erosion of common OnePlus values don't stop there. Gone are the alert slider (a staple of the company’s handsets since the OnePlus 2), high quality vibration motor, and gasket around the SIM tray (for water and dust protection). On the plus side, the N10 5G includes a headphone jack, stereo speakers, and microSD expansion support, which are all missing from the Nord. The battery is also larger at 4300mAh (vs. 4115mAh). 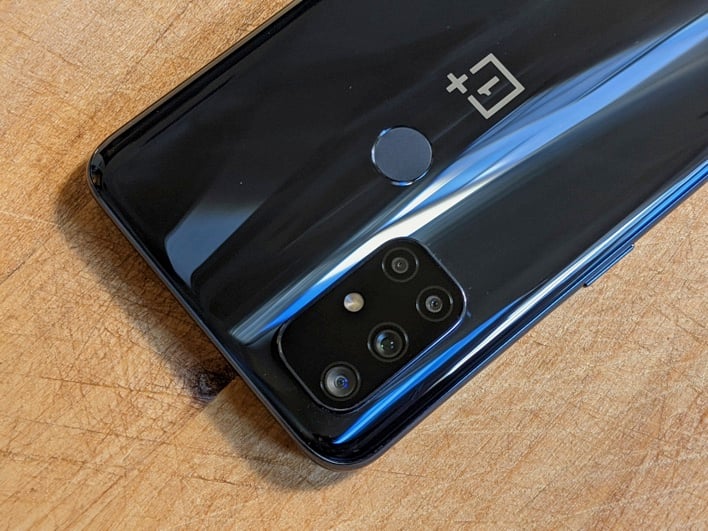 Besides the capacitive fingerprint sensor and four cameras (64MP main sensor, 8MP ultrawide, 2MP macro, and 2MP monochrome lens), the rear features the usual OnePlus branding. Without it, the N10 5G might easily be mistaken for a generic phone from Oppo, Xiaomi, or even Huawei. In front, there’s an earpiece above the 6.49-inch 1080p IPS display which also doubles as one of the stereo speakers.

You’ll find the other speaker on the bottom edge, alongside the USB Type-C port, primary mic, and headphone jack. There’s a secondary mic on top, power/lock key on the right side, and volume rocker on the left next to the dual SIM/micro SD tray. Overall, the N10 5G’s design is fine. Nothing really stands out besides the oddly large chin, which OnePlus tried to subdue by tapering the glass along the bottom edge.


Check out this unboxing video for a quick tour before we continue...

The OnePlus Nord N10 5G’s screen is quite good. It’s a 6.49-inch FHD+ IPS display (2400 x 1080 pixels, 406ppi) with a 20:9 aspect ratio and a 90Hz refresh rate. While it’s no AMOLED panel, colors are accurate, contrast and viewing angles are good, and it’s bright enough in direct sunlight. Obviously, the high refresh rate is the star of the show here -- it makes everything nice and fluid, which result in a better user experience. 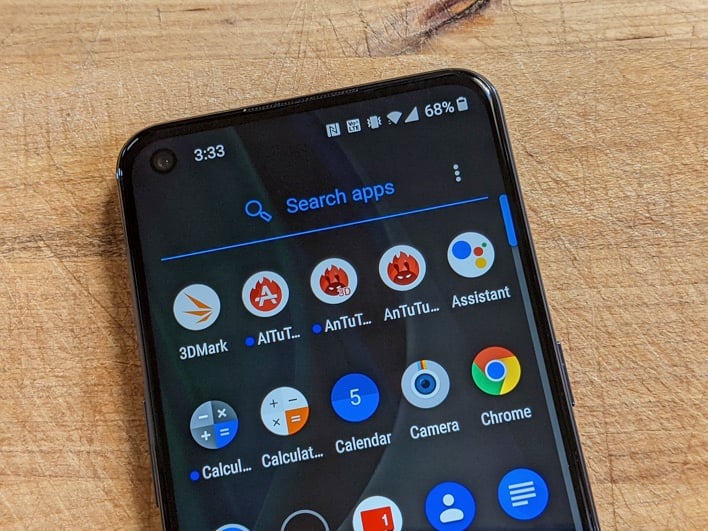 It’s also completely flat (which we prefer) and the only thing that interrupts the screen is the punch hole in the top left corner. Bezels are reasonably narrow on the top and sides, but again, that chin is just massive. We understand that IPS displays need more space at the bottom for connectors and electronics, but it seems more pronounced than on other handsets we’ve tested, like the Moto One 5G.

On paper, the N10 5G’s camera system is a hybrid between the original Nord’s and the OnePlus 8T’s. But instead of leveraging Sony’s popular and excellent IMX 586 48MP 0.8-micron sensor, the N10 5G relies on Omnivision’s new and unproven OV64B 64MP 0.7-micron sensor for its main shooter -- paired here with an f/1.8 lens (without OIS). This sensor outputs in 16MP images by “binning” (combining) four pixels into one. 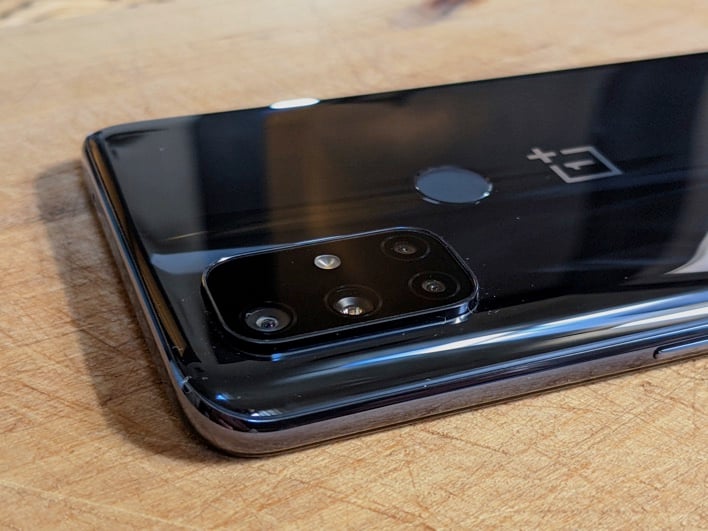 The N10 5G captures stabilized video (with stereo audio) at up to 4k 30fps and 1080p 60fps with both the main and ultrawide shooters, and up to 1080p 60fps with the selfie camera. While it lacks the original Nord’s Super Stable mode, it offers time lapse and slow motion (1080p 120fps and 720p 240fps). Other modes include panorama, portrait, Nightscape (night), pro (manual), macro, and monochrome.

While the N10 5G shoots decent pictures in daylight, low-light performance is a miss -- particularly with the ultrawide. Color balance, exposure, and dynamic range are quite good given enough light. In the dark, though, the main shooter quickly loses detail, and the ultrawide often takes blurry shots. Night mode obviously helps in low light -- basically turning lackluster photos into acceptable ones.

Unfortunately, this comes with some compromises. On the main camera, Nightscape disables zooming and crops the sensor slightly for better electronic stabilization. This means the FoV is narrower when shooting in night mode. As for zooming, results are okay up to about 3-4x before image quality suffers -- as long as there’s enough light. Selfies are pretty nice, but the macro is all but useless since there’s no AF.