Despite its small dimensions and light weight, the HP Elite Dragonfly is also incredibly sturdy. There's no hint of flex in the palm rest, and the keyboard doesn't bounce around despite being just 0.63 inches thick. This is largely due to the system's rigid magnesium frame, but HP also managed to recycle some ocean-bound plastics and put them to good use in the system's speaker mounts. 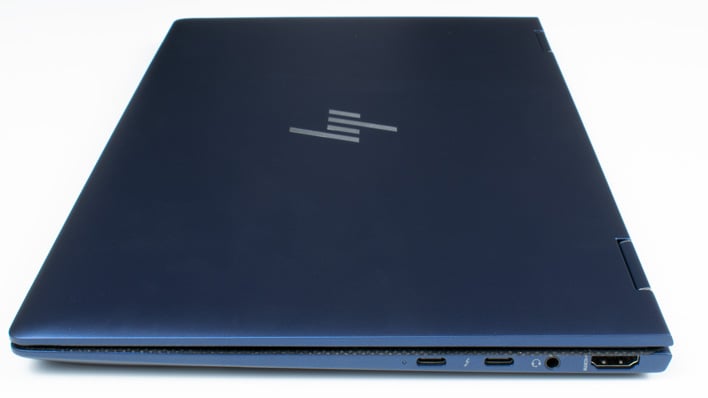 The sides of the Elite Dragonfly have enough connectivity to keep most folks happy, while not forcing users to rely on dongles or adapters. On the right side of the unit, HP placed a pair of Thunderbolt 3 ports in the USB Type-C form factor, a four-pole headset jack, and an HDMI 1.4 connector. Around the left side of the device is a USB 3.1 Type-A port, the system's power button, and a Kensington-style lock port. The power button has a white LED that lights up when the system is on and breathes when the Elite Dragonfly sleeps. 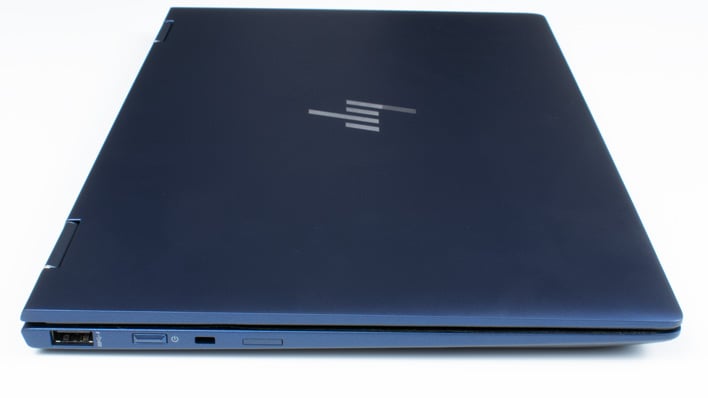 The display's dual-hinge design has enough resistance to keep the screen in place when you move it but not so much resistance that moving the lid is a chore. Since this is a 2-in-1, the hinge wraps around 360 degrees, allowing the Elite Dragonfly to fold open and be used as a tablet. HP covered the screen in Corning Gorilla Glass to protect it from scratches and provide some measure of reassurance against drop damage too. We should also note that the machine passed 19 MIL-SPEC-810G testing, so its durable enough to handle the rigors of daily travel. 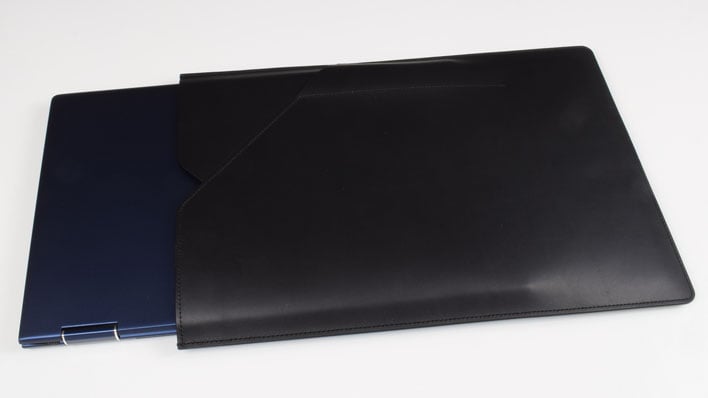 HP included a protective leather sleeve for the Elite Dragonfly with our review unit as well. The sleeve is pretty convenient for users on the go, and the Elite Dragonfly slides right into the pouch whether the display is wrapped all the way around in tablet mode or folded down in the closed position. It's a snug fit, which prevents the system from sliding out of its protective wrap. The sleeve is fairly thin, but it should protect the Dragonfly from scratches and provide a little extra protection while it's stashed away in a backpack or other bag.


Tablet Time With The Elite Dragonfly

The light weight and sturdy design are all necessary for a reason: the Elite Dragonfly is a 2-in-1, and as such it's intended to be used as a tablet at least some of the time. Thanks to that combination, the Elite Dragonfly makes for a pretty decent tablet experience. The lid has a gyroscope built in, so the screen's contents auto-rotated as we flipped the device around in our hands. 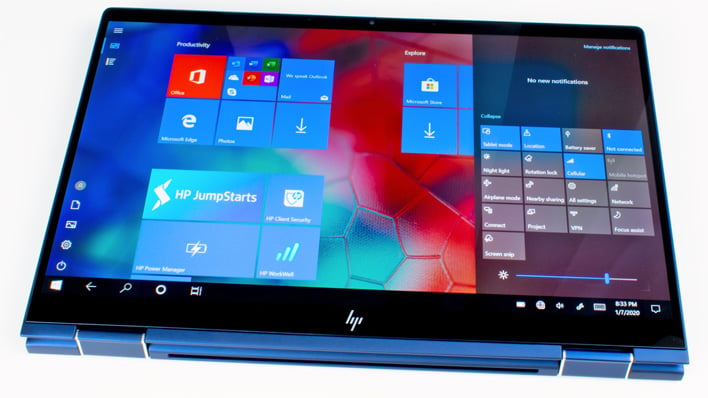 Using Windows 10 in tablet mode on the HP Elite Dragonfly is about what you'd expect from any folding 2-in-1. The Dragonfly's display is plenty sensitive, but seemed to recognize our palms and didn't register false input very often. Pinch to zoom, swipe to navigate, and selecting items in Windows Explorer were all a breeze. When in tablet mode, the Elite Dragonfly shuts off its keyboard, so the system doesn't recognize accidental key presses as input. 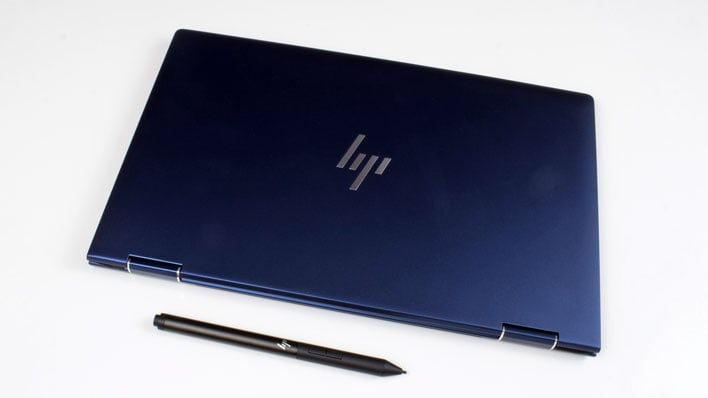 HP also bundled our review unit with its Windows Ink compatible Active Pen G3. This Bluetooth stylus has a total of three buttons, all of which the bundled Pen Settings app can customize. Magnets inside the pen can hold it to the body of the Dragonfly when it's not in use, too. The pen has a rechargeable battery and a USB Type-C connector tucked away underneath a protective flap which guards against dust getting into the port. HP says the battery should last about a week after a 30-minute charge, and status LEDs on the stylus show the battery's remaining power. 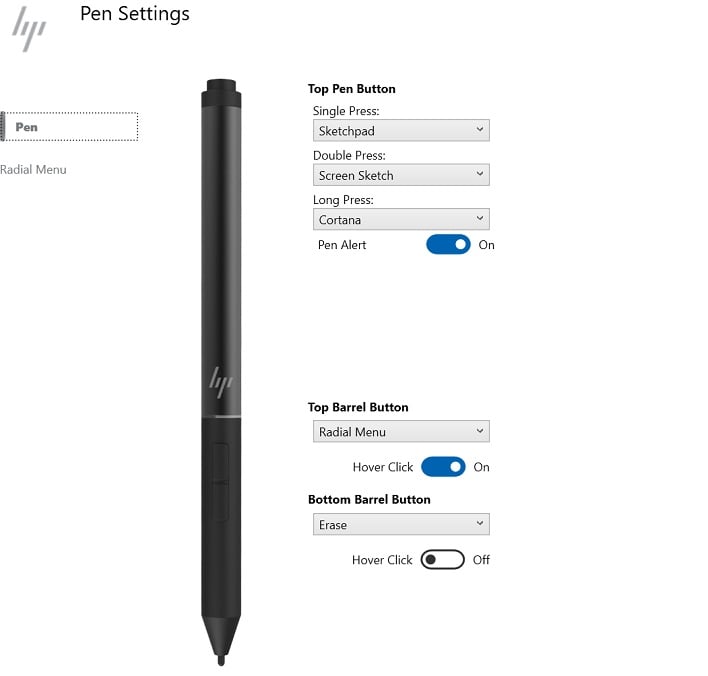 Using an active stylus in Windows is pretty intuitive, and the Active Pen G3's added software features only enhance the experience. The Pen Settings control panel has separate actions for each button, including key stroke macros, quick-launching Windows apps, and a radial menu with shortcuts to lots of features. We liked the radial menu since we weren't limited to just the functions bound to pen buttons. The tip has 4096 levels of pressure sensitivity, and a slider in the control panel allows adjusting the sensitivity curve.


Drawing and writing with the pen worked great. I'm not much of an artist, but that didn't stop me from doodling, coloring, and writing with the pen in OneNote, Whiteboard, and any other app that supports Windows Ink. Annoyingly, Whiteboard and OneNote really wanted us to sign into a Microsoft account, but that's not the Elite Dragonfly's fault. Using the pen is a snap, and at around $75 it's pretty reasonably priced.

Finally it's time to open the Elite Dragonfly to see what kind of secrets we can spy. Getting in is pretty simple if you have the right tools. A quintet of Torx T5 screws and a little prying is all it takes to get inside. Be careful with those screws and a Torx driver, however; the chassis of the laptop seemed pretty scratch resistant, but the blue color of the screws did start to fade just by pulling out the screws. We'd also prefer to see captive screws in a machine this luxurious, but instead the screws pull out completely, so don't lose them. 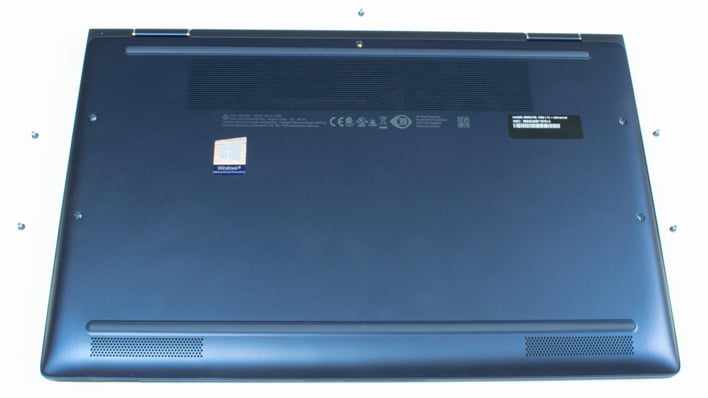 We're pleasantly surprised with how user-serviceable the Elite Dragonfly is. Both the Intel Wi-Fi module and the NVMe SSD with Optane cache pop right out of their slots like any other M.2 devices. We wanted to get a better look at the SSD with Optane Memory, so we had to pop the heat spreader off the drive to take a look. It's unfortunate that the system's RAM had to be soldered, but there's only so much room inside this tiny laptop. 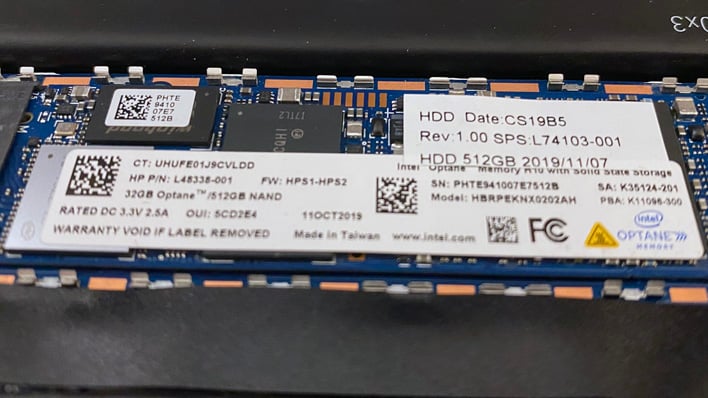 The bottom is dominated by the relatively large 56 Watt-hour battery. Kudos to HP, the battery can be replaced by removing a handful of Phillips head screws and disconnecting a wiring harness. Flanking the battery on each side sits two of the four Bang & Olufsen-tuned speakers. The other two sit below the battery in the photo below, providing downward-firing audio, and also some front-facing audio for tablet mode. 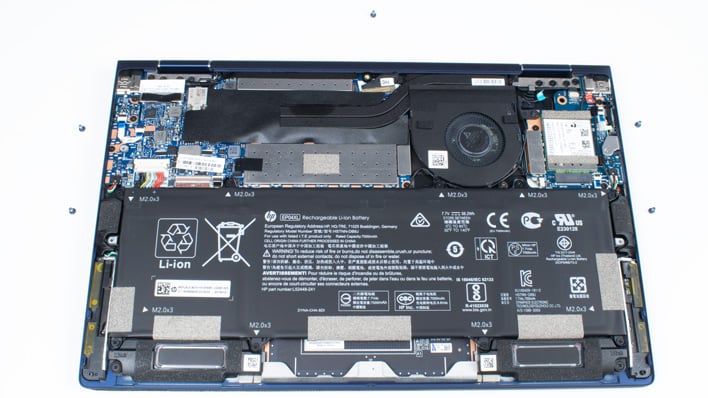 The Elite Dragonfly's cooling system consists of a pair of heat pipes for transferring heat from the CPU to a fin array. A single blower-style fan exhausts heat out the rear of the body. The vent is only visible when the device is folded into tablet mode, seen earlier in the tablet section, but even when we had the convertible in laptop mode we could feel warm air rushing out the vent and in front of the display when it was under load.

It's time to put this puppy back together and take a look at HP's bundled security features and the software experience.
PREV PAGE NEXT PAGE