We had boots on the ground again at the 2020 Consumer Electronics Show (CES) in Las Vegas, and we of course ran across a number of stellar products that will hopefully be making their way to consumers this year. Even though we saw literally hundreds of exciting new tech products and gear at CES 2020 this year, a few stood out that were near and dear to our hearts, and we think will be for you as well.

This year's CES was punctuated with lots of burgeoning new technologies from AI bots, to 8K TVs and all new mobile PC platforms. In fact, we were encouraged and impressed at the pace of innovation this year, especially in the PC and gaming arenas. To be honest, sometimes CES shows can be real snoozers, with just more iteration than true innovation. However, at CES 2020 we saw some great new products and technologies, and here are our favorites of the show. Behold, HotHardware's 12 Best of CES 2020... 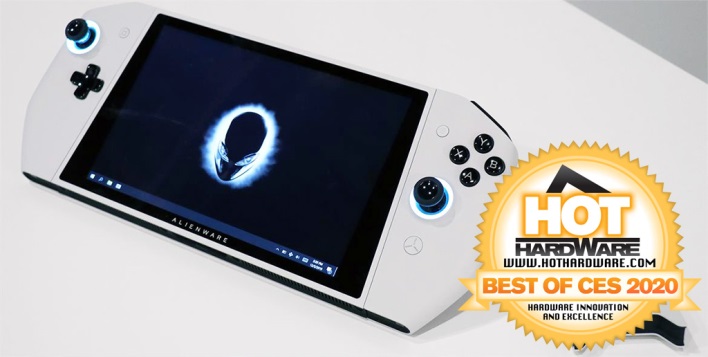 The Dell Alienware Concept UFO was perhaps one of the biggest surprises for us at the show, thanks to its handheld form-factor and the ability to play your entire Steam or other PC game library with the power of a full Windows PC in its diminutive design. Although the Concept UFO looks somewhat like an overgrown Nintendo Switch – including detachable controllers with a satisfying reattached and bridge system -- its unidentified hardware (namely the CPU and GPU used inside) appears to be lightyears ahead of that console's NVIDIA Tegra X1 chip. The only big questions left are when Dell will bring this little gem to market and for how much. Interest and demand from the community on Concept UFO has been strong, with many proclaiming that Dell should just shut up and take their money.  Without question, Dell's Alienware Concept UFO made a big splash. 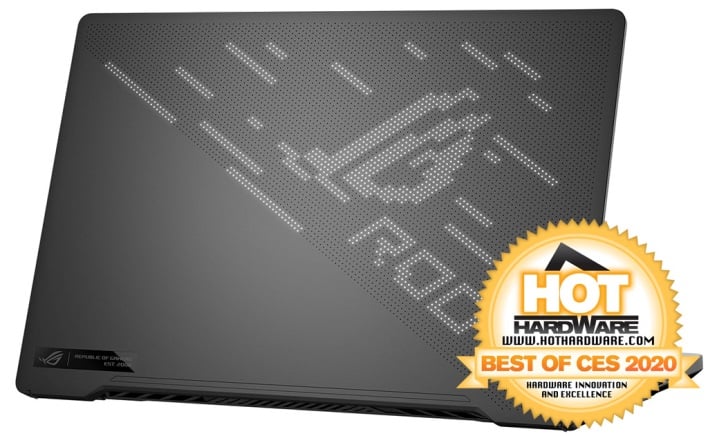 The new ASUS ROG Zephyrus G14 gaming laptop makes the list for a number of reasons, starting with its new Ryzen 7 4800HS processor. This chip is based on AMD's current-generation 7nm Zen 2 microarchitecture, and features 8 cores capable of executing 16 threads. Not to be outdone on the graphics front, the processor can be paired with up to an NVIDIA GeForce RTX 2060 discrete GPU, 14-inch Full HD 240Hz FreeSync display, up to 32GB of DDR4 memory, and up to a 1TB PCIe NVMe SSD. ASUS even goes the extra mile with an incredibly cool AniMe Matrix option on the display lid. This auxiliary display features 1,215 mini LEDs that can be customized to show pictures, text, or animated GIFs. 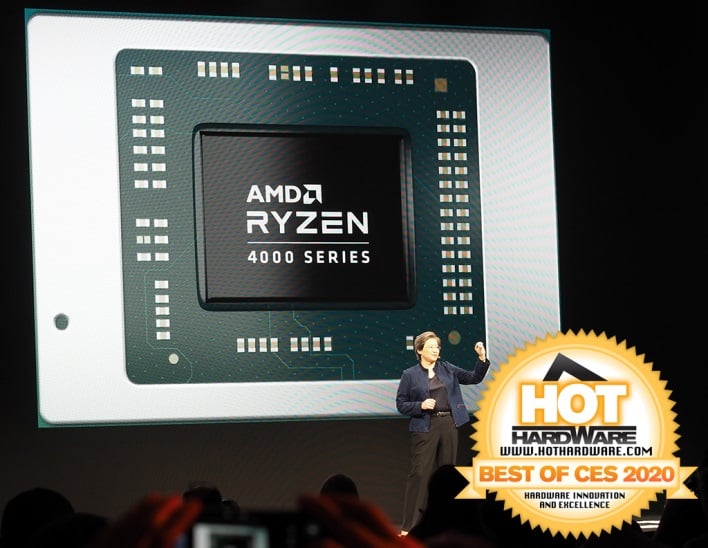 AMD's 3rd Gen Ryzen 3000 series desktop processors, based on the company's Zen 2 architecture, offer compelling performance at great price points, such that AMD has continued to take significant market share from Intel. Zen 2 even closes the IPC gap between Intel and AMD in lightly threaded workloads. However, for AMD to make a dent in Intel's dominant mobile CPU stack will take some series muscle, combined with excellent power efficiency. And apparently that's exactly what the company plans to bring, according to its unveiling of the Ryzen 4000 Mobile family of processors at CES 2020. With 15 Watt SKUs up to 8 cores and 16 threads at 4.2GHz, AMD is claiming major performance advantages versus Intel -- up to 90% in multithreaded workloads, a slight edge in single-thread performance, and gains north of 25% in graphics/gaming versus Intel's latest 10nm Ice Lake processors with Gen 11 Iris Plus graphics. The company also has beefier 45 Watt versions planned as well. We'll see if all these claims hold true (and what battery life will be like) when the chips launch in retail machines in the Spring of this year, but regardless, color us impressed, AMD. 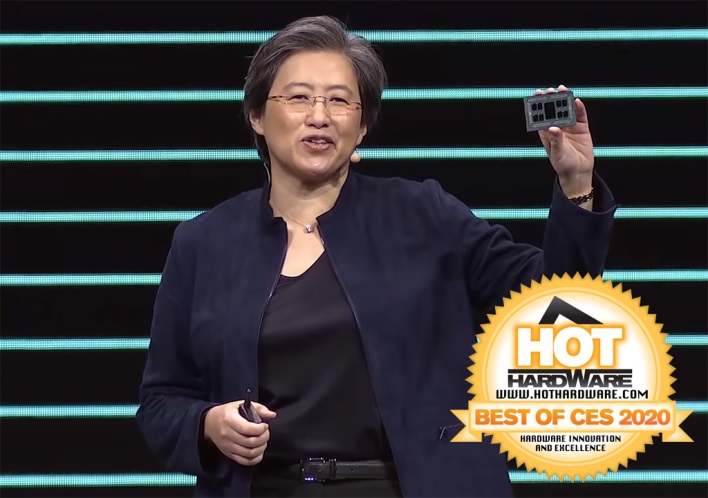 AMD's Threadripper family really needs no introduction, as its prowess as a multi-threaded beast is well documented. The new Ryzen Threadripper 3990X carries the crown as the flagship in the 3rd generation family and features a staggering 64 cores/128 threads, a boost clock of 4.3GHz and a whopping 288MB of total cache. While priced at $3,990, the Threadripper 3990X will represent a remarkable performance bargain compared to Intel's latest Core-X HEDT processors (Cascade Lake-X). In fact, AMD showcased Threadripper 3990X beating a $20,000 dual socket Intel Xeon Platinum server setup in a VRAY benchmark. Talk about a throw-down. 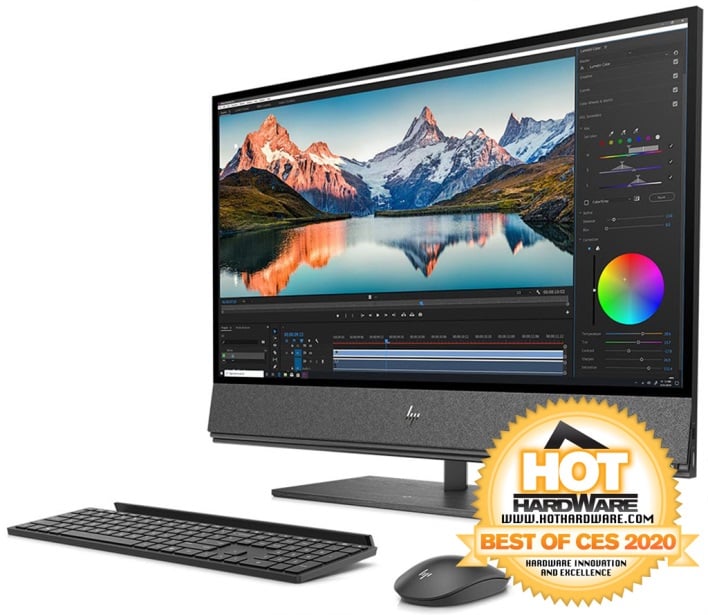 The Hewlett-Packard Envy 32 AIO is by all accounts the ultimate all-in-one Windows 10 PC, and it struts its stuff with up to a 9th generation Intel Core i7-9700 processor. On the graphics side, you won't be left wanting for power, as you can configure up to an NVIDIA GeForce RTX 2080 on board. We should also mention that the Envy 32 AIO is certified under NVIDIA's RTX Studio program. Other items of note include up to 32GB of DDR4 memory, up to a 1TB SSD, a 31.5-inch 4K OLED display (DisplayHDR 600 certified) and a built-in Qi-wireless charging pad for your smartphone. The Envy 32 AIO is available now priced from $1,599. 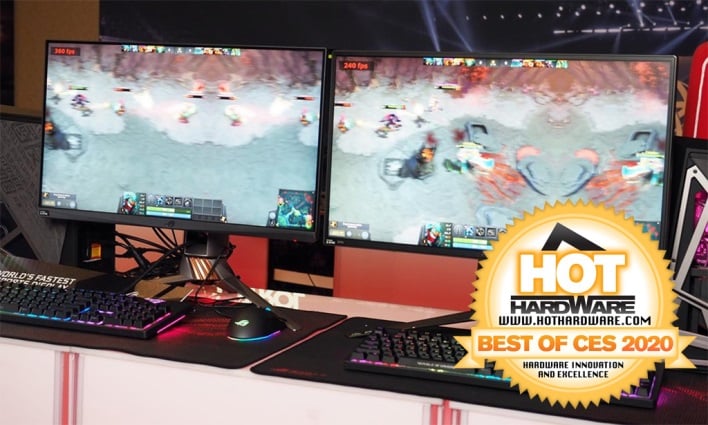 We've been seeing refresh rates ratchet up over the years for gaming displays, but ASUS and NVIDIA are crushing all challengers with the ASUS ROG Swift 360Hz. As its name implies, the display features a 360Hz refresh rate and of course supports G-SYNC technology. The new gaming monitor measures 24.5 inches across and comes with a Full HD resolution (1920x1080). At this time, ASUS and NVIDIA haven't announced a launch date or pricing for the ROG Swift 360Hz but we're hoping it's sooner than later. 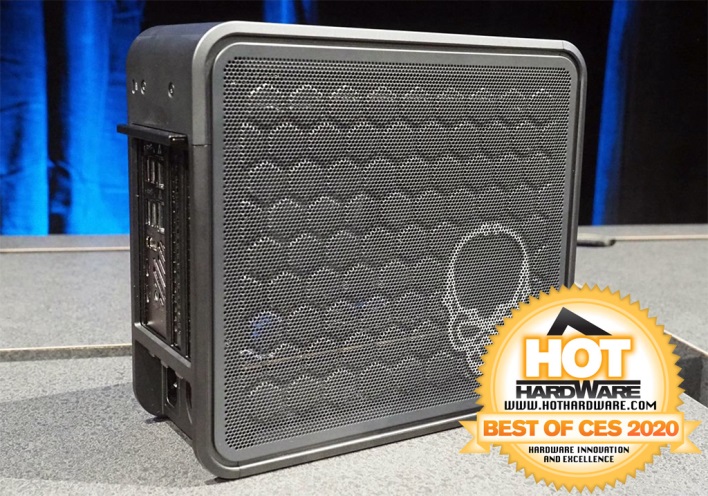 We've always been impressed with Intel's NUC machines, and the new NUC 9 Extreme (Ghost Canyon) is a stunner. Intel has packed in true desktop-class hardware inside the machine thanks to 10th generation Comet Lake processors (up to an 8-core/16-thread Core i9). There's even an x16 PCIe slot inside the chassis that will allow you to add a full-size discrete GPU from AMD or NVIDIA. In addition, the PSU is integrated inside the chassis for this little beastie, so there's no need for an external AC power adapter. Needless to say, this is the most powerful NUC that Intel has ever released, and the ability to add discrete graphics makes this an even more compelling solution for enthusiasts. 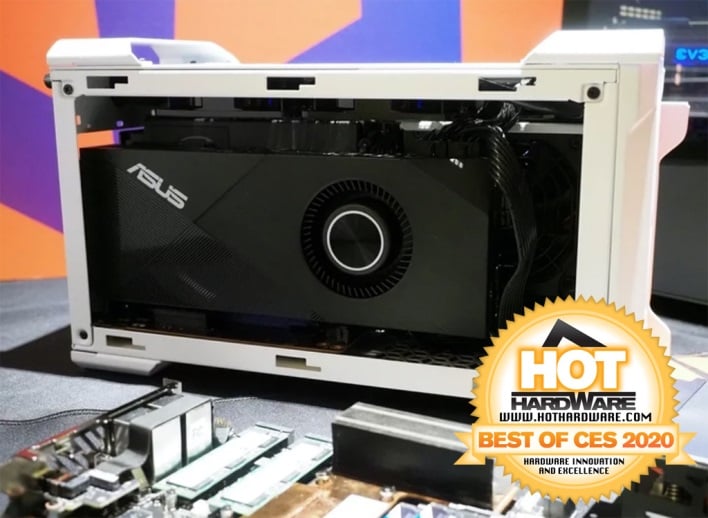 The CyberPower Nox Mini PC takes the same approach as the aforementioned Intel NUC 9 Extreme, albeit topping out with a 9th generation Core i9-9980HK processor (8 cores/16 threads). The system we saw system at the show was configured with a boastful GeForce RTX 2080 Ti GPU and 16GB of RAM (although up to 64GB can be configured). The Nox Mini also came with a 1TB SSD and a powerful 850-watt Cooler Master PSU. If you're looking for a gaming system that won't take up a lot of space, yet still gives you compelling expansion options, the Nox Mini PC should definitely be on your watch list. Think the size of a Razer Core, but with an entire enthusiast PC platform on board as well. Tasty. 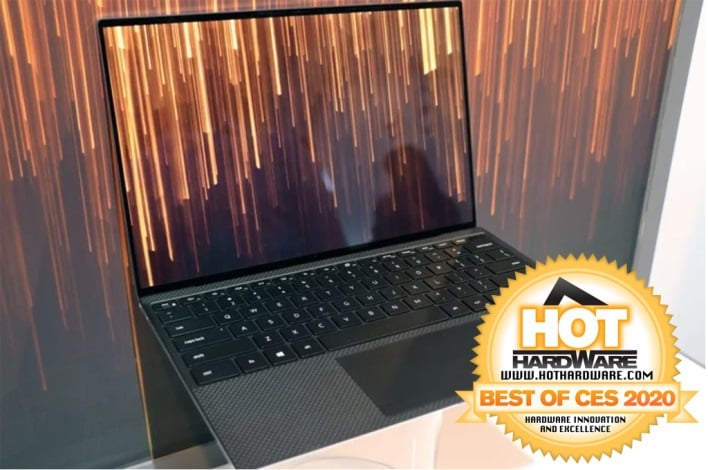 The Dell XPS 13 has been one of the premiere Windows ultrabooks available on the market for years now, and Dell saw fit to give it a bit of an overhaul for 2020. This time around, the XPS 13 is boasting a four-sided InfinityEdge display with absolutely minimal bezels, a larger 13.4-inch 16:10 display, and a chassis that is thinner, lighter and smaller. If that wasn't enough, the system rocks 10th generation Ice Lake CPUs (with Intel Gen 11 graphics), up to a 2TB SSD, 4K+ panel options, Wi-Fi 6, and Thunderbolt 3. With prices starting at just $999, the XPS 13 makes a compelling option for those looking for powerful, featherweight laptop and it will likely claim an HH Editor's Choice award if all goes well when we get a review unit in for testing. 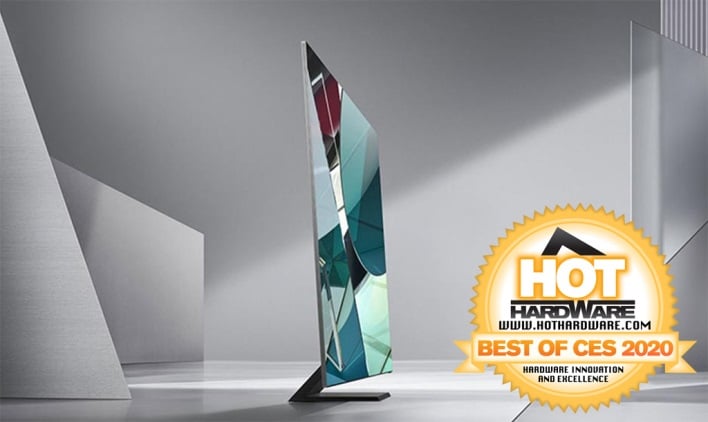 8K televisions aren't exactly very prevalent in the marketplace right now, but Samsung is doing its best to advance the segment with each new release. Its latest offering is the Q950TS, which is a QLED-based TV that measures just 15mm thin. The headlining feature of the Q950TS, however, is its barely there display bezels all around. This is probably one of the best-looking TVs that we've even seen, and its 8K capabilities make it future-proof for years to come. And even your Full HD and 4K content will look good, thanks to the Q950TS's AI quantum processor that can intelligently upscale content to 8K. So many pixels, so much want. 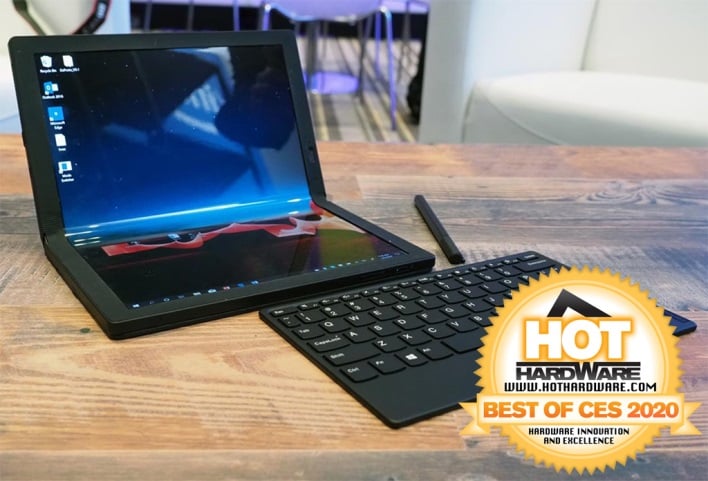 We've seen the introduction of folding display smartphones, and now it's time to see the same trend upsize to the notebook form-factor. Enter the Lenovo ThinkPad X1 Fold, which makes its debut as the world's first foldable Windows PC. The 2.2-pound notebook features an OLED display (2048x1536) that measures 13.3 inches across and folds in half with app spanning and continuity. It features an Intel SoC (likely Lakefield) along with up to 8GB of RAM and up to a 1TB SSD. It also has pen stylus support and a magnetically-attached keyboard if you don't want to bang on glass. However, we we'll say the OLED display is a lot more comfortable for typing than you might think actually. Lenovo has even included 5G support with the ThinkPad X1 Fold, likely provided by the Qualcomm Snapdragon X55 modem. All of this innovation doesn't come cheap though, as the ThinkPad X1 Fold will launch in mid-2020 with a starting price of $2,499. Still, hat's off to Lenovo for making it real with the first foldable 5G Windows PC. 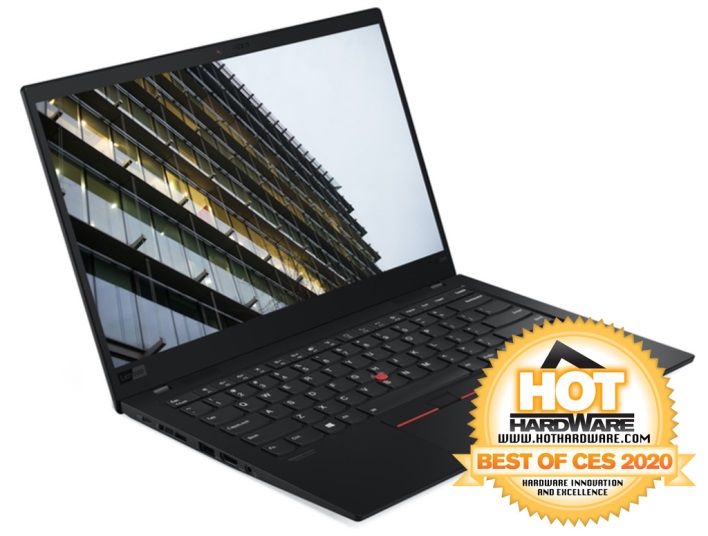 The Lenovo ThinkPad X1 Carbon (8th generation) represents an iterative update for the model but it's still one of our favorite business-class utlrabooks. That means that we're getting more of a good thing, including a new 14-inch Full HD panel that include an AG PrivacyGuard filter. This panel option joins existing Full HD, WQHD, and 4K UHD options. 10th generation Intel Comet Lake-U processors are running the show (up to a Core i7), and you can configure the system with up to 16GB of RAM and up to a 2TB SSD. Optional 4G LTE connectivity is also along for the ride, and you'll find that the battery should last up to an impressive 18.5 hours. The latest ThinkPad X1 Carbon will be available later this year priced from $1,499.

That wraps-up our Best of CES 2020. We're looking forward to seeing these products hit the market later this year, so stick around while we kick the tires a bit more, hopefully on each and every one of them.