When it comes to high refresh rate displays, it appears that OEMs are in a global arms race to one-up each other. Just a few weeks ago, we were alerted to the existence of the ASUS TUF Gaming VG279QM, which is a 27-inch Full HD panel that flexes its muscles at 280Hz (overclocked).

However, NVIDIA and its partners are swinging for the fences with 360Hz G-SYNC displays. The first display to come with this blazing fast refresh rate is the ASUS ROG Swift 360, which NVIDIA announced tonight. Interestingly, ASUS hasn’t provided us with its own full rundown of the display’s specs, so we’ll have to go by what NVIDIA has told us.

Besides the 360Hz headlining spec, the display measures 24.5 inches across and has a Full HD resolution (1920x1080). NVIDIA quotes a “tuned dynamic overdrive” with minimal ghosting and an advanced G-SYNC processing chip. And for those wondering, the panel is made by AU Optronics. 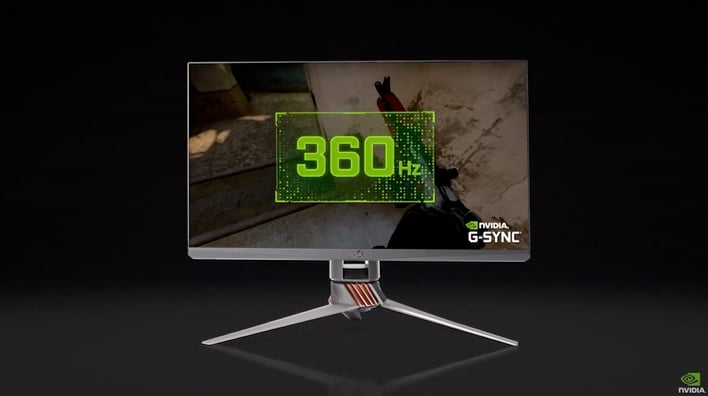 Unfortunately, there’s not much else that ASUS or NVIDIA were willing to tell us about the ROG Swift 360, even though we got some hands-on time with the monitor. All we do know that is that it is well along in development and we should see it on store shelves before the year’s end. ASUS will likely be providing pricing details closer to its launch, but we imagine that it will come with quite a premium over existing 240Hz and 280Hz panels.