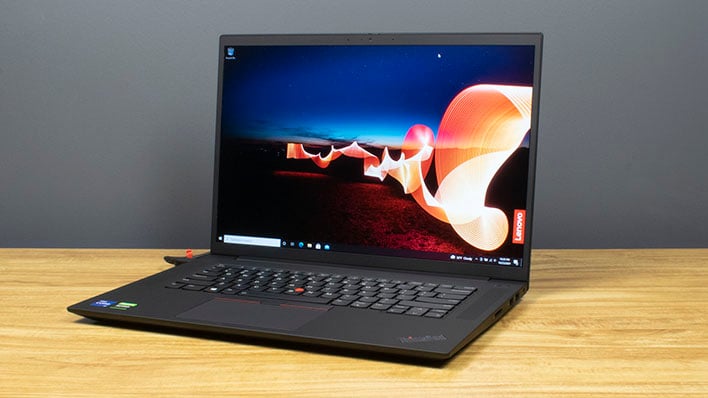 Ultraportable laptops with 13 or 14-inch displays and low-power processors are great for a certain kind of user. Those folks are usually found running from gate to gate in an airport or catching an Uber to a sales meeting. These machines have great single-threaded performance and good-enough graphics capabilities, but the thermal limits and the laws of physics get in the way of more demanding workloads. Lager format machines have the extra cooling capacity and thermal budget to add in discrete graphics and more processor cores, and the users that value this extra muscle are the target demographic that Lenovo's new ThinkPad X1 Extreme Gen 4 aims to please by striking a balance of size, weight and horsepower.

It's easy to think of the ThinkPad X1 Extreme as one of Lenovo's ThinkPad X1 Carbon's in a bigger enclosure, and in some respects that's true. Lenovo endowed the 4th generation X1 Extreme with its trademark keyboard and distinct stylings, but that line of thinking doesn't take into consideration the performance its new 16" laptop has under the hood. NVIDIA GeForce RTX graphics and high-powered Tiger Lake-H processors are the order of the day here, and that class of components will blow out the thermal budget of an ultralight laptop. So let's meet the new ThinkPad X1 Extreme Gen 4 and see what its more robust configuration is made of, how it performs and the value proposition Lenovo has on offer. 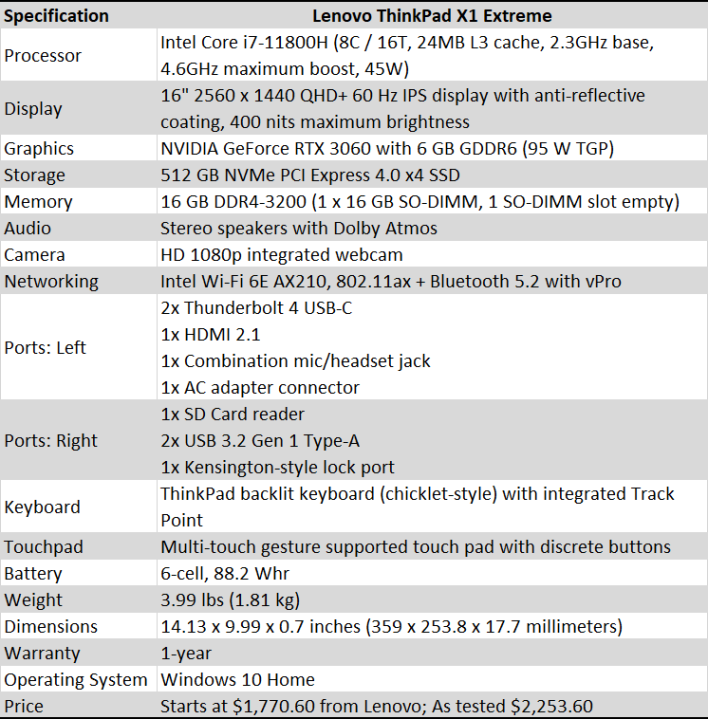 The ThinkPad X1 Extreme has Intel's current generation of Tiger Lake-H processors under the hood. Our review unit has the Core i7-11800H, which has eight cores (16 threads via Hyper Threading) and 24 MB of L3 Smart Cache. Turbo clock speeds max out at 4.6 GHz for a single core, so there should be plenty of single-threaded performance on tap. While desktop versions of Intel's 12th generation processors, codenamed Alder Lake, are already out the door with its hybrid architecture and killer single-threaded performance, there hasn't been any releases for portable PCs just yet. 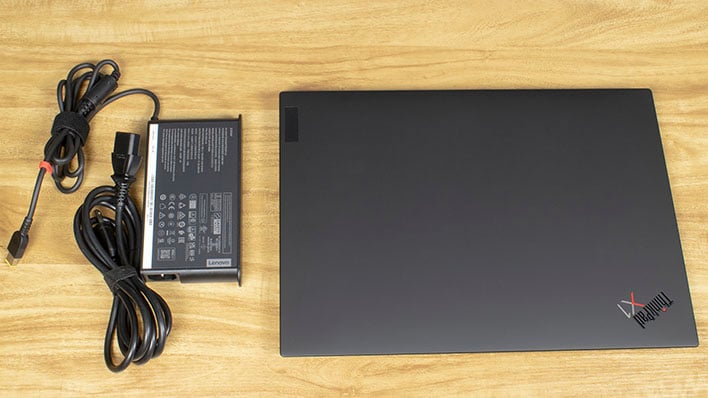 To back that speedy processor, Lenovo gave the ThinkPad X1 Extreme 16GB of DDR4-3200 memory. Unfortunately, our example has that memory in a 1x16 GB single-channel configuration, which means the system is leaving memory bandwidth on the table. The good news is that Lenovo does offer dual-channel 2 x 8 GB configurations on its website, but such a model wasn't available for us to test. More importantly, the memory is user-serviceable standard SO-DIMMs, so upgrading later is not a challenge in the least. Speaking of user-serviceable, the 512GB M.2 NVMe solid-state drive is also a simple spec to upgrade later on.

Graphics come by way of NVIDIA's GeForce RTX 3060 notebook GPU. The driver control panel tells us this is a 95 Watt version of the RTX 3060, with 3,840 CUDA cores. Clocks max out at 1,425 MHz and there's 6GB of GDDR6 memory onboard attached to the CPU via a 192-bit interface. In comparison to the desktop version of the GeForce RTX 3060, it's actually more CUDA cores, but the mobile variant runs at lower speeds to preserve power. Still, this loadout has the potential to give a fluid gaming experience at relatively high settings depending on the resolution, assuming the cooling can keep up. This notebook is also part of NVIDIA's Studio program. Studio notebooks are meant to be reliable content creation machines first and foremost, but you're nuts if you don't think we'll run our gaming tests on this notebook. If this isn't enough performance, Lenovo offers upgrades all the way up to the GeForce RTX 3080 notebook GPU. 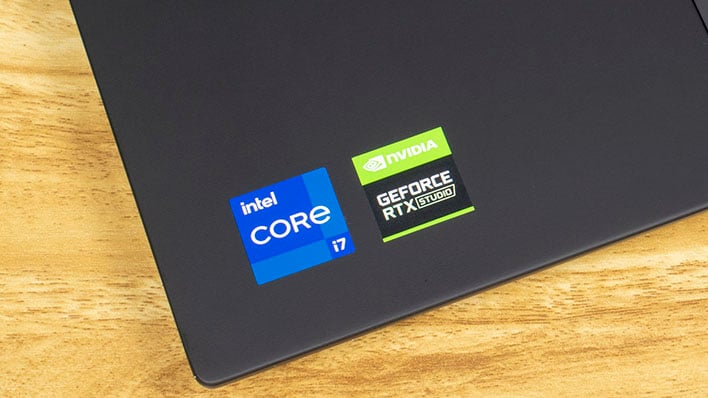 For networking, Lenovo gave the ThinkPad X1 Extreme Intel's latest AX210 Wi-Fi 6E chipset with vPro and Bluetooth 5.2 support. Folks that need cellular connectivity can add an optional Qualcomm X55 5G modem for a pricey $462 upcharge. It would have been nice to see a Gigabit Ethernet port on a larger notebook like this, but like headphone jacks on smartphones, wired networking seems to be going the way of the dinosaur on flagship notebooks these days. A docking station would likely have it anyway, we suppose. 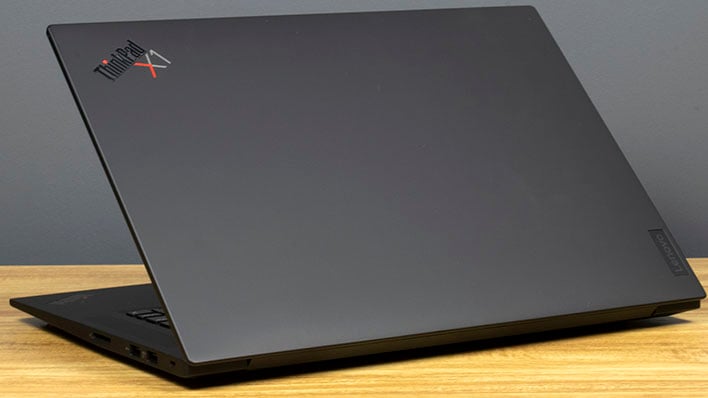 The "i" in ThinkPad has a red LED indicating the system is on, and it pulses while in sleep mode.

By default the ThinkPad X1 Extreme comes in a black polycarbonate shell with a matte finish and a soft touch. In our time with the notebook it's been pretty good about rejecting fingerprints, although it will show some faint smudging in direct light. Buyers who opt for a top-of-the-line UHD+ display can get the Extreme with a carbon fiber weave material in the lid instead of plain ol' poly. The matte black finish on our review unit is nice enough and looks good, but it doesn't feel quite as premium as the carbon fiber on its smaller sibling or the aluminum body found on a Dell XPS 13 or Apple MacBook Pro. Still, it should weather consistent use well. 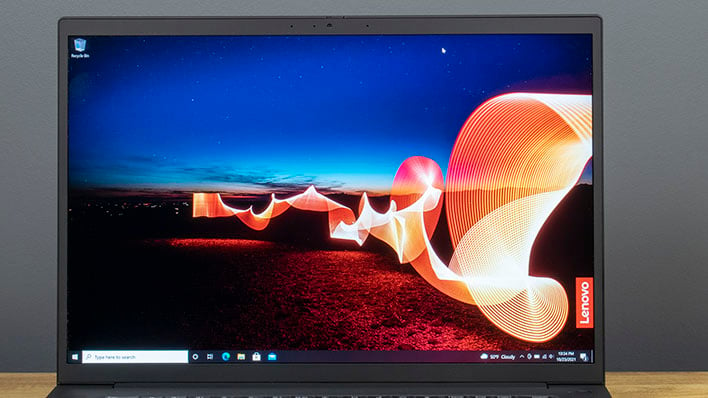 The 16:10 IPS display panel starts with a resolution of 2560 x 1600 and a maximum brightness of 400 nits, and that's exactly what this unit has. For everything other than HDR video and outdoor use in direct sunlight, 400 nits is plenty of light. Otherwise the display has a pixel density high enough that text looks sharp, and it has the very wide viewing angles and high color accuracy we expect from an IPS display. While it only has a refresh rate of 60 Hz, there's no noticeable ghosting or trails, and colors are vibrant. Lenovo Vantage has several different color profiles available for those without colorimeters. As a machine with the NVIDIA Studio moniker, the Extreme is targeted at a crowd where color accuracy is critical, so most buyers will probably opt for calibration themselves.

There are a pair of upgraded display options available that include Dolby Vision certification and a 600-nit maximum brightness at either 2560 x 1600 or 3840 x 2400, and the top end includes that carbon fiber finish we mentioned earlier. For whatever reason, Lenovo also requires these displays on its website to get an infrared camera, so the integrated 1080p webcam in our review unit does not support Windows Hello. If you need facial recognition, you'll have to spring for an upgraded display as well. On the other hand, a fingerprint reader is built right into the power button so users who want some form of biometric authentication are in luck.

The bezels on the ThinkPad X1 Extreme's display are pretty thin, especially on the sides. The top bezel is a big taller, however, to make room for that non-IR camera along with a pair of noise canceling microphones. We're really glad to see Lenovo plug a 1080p camera into this notebook, as it seems that remote work and Teams meetings aren't going away any time soon. 720p cameras are fine, but this 1080p unit is clearer and offers better overall quality. We just wish it supported IR facial recognition, too. 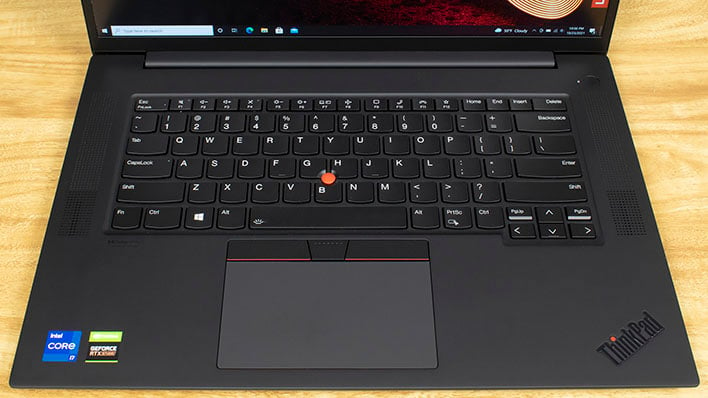 Up-firing speakers with Dolby Atmos and that trademark ThinkPad keyboard


Those dual microphones do a good job, as callers had no problems hearing us even with noise in the background. The up-firing stereo speakers carry Dolby Atmos certification, and they do a good job for voices, and they're not bad for some light music too. Notebooks just don't have the room for big woofers, though, and so like so many others we review, the built-in speakers are not a great option for action movies where boomy bass is a must. Fortunately there's still a headphone jack and Bluetooth connectivity, both of which allow you to plug in or wirelessly connect speakers of your choosing.

The keyboard is typical ThinkPad: very comfortable with adequate 1.5 millimeters of travel. As always with our notebook reviews, I'm writing the entire article on the review unit and it feels great. The keys are just the right size and it's quite comfortable for a notebook. The track pad is a little less great, as it's not particularly big, but it does have its own discrete buttons. However, what Lenovo wants mouse-less folks to use for navigation is the pencil eraser-style TrackPoint. Paired with those buttons on the track pad, it's quite easy to get around the system without a mouse, though it still lacks the precision of a regular mouse. Either option will do in a pinch and on the go, though. 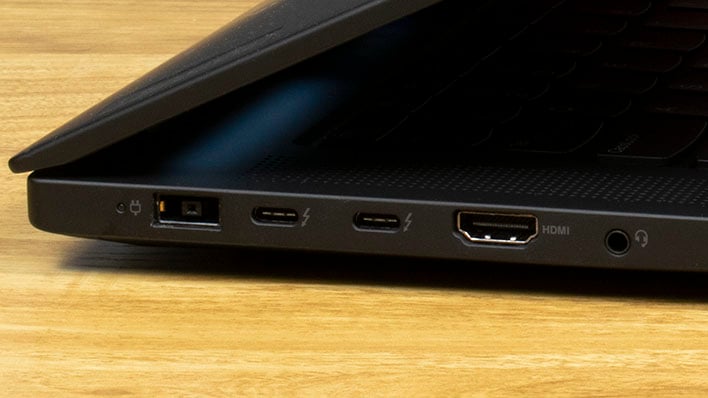 Lenovo has given the ThinkPad X1 Extreme enough ports for most users. The left side has a pair of Thunderbolt 4 ports, an HDMI 2.1 output, and a four-pole combination headset jack to plug in a pair of speakers or an analog headset. There's also a dedicated connector for the system's robust 230 Watt AC adapter. The adapter itself has a rectangular connector that's just a bit thicker (tall) and narrower (wide) than a USB-A port, and you'd be forgiven for confusing the two. It's not physically possible to plug it into anything but the appropriate jack, though, so there's no chance of doing something bad to the system. 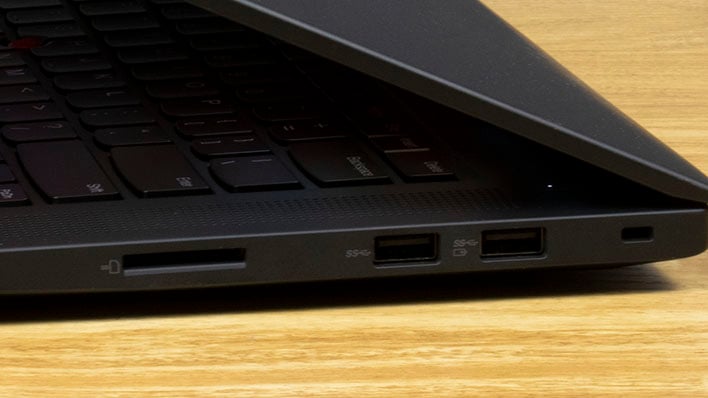 Around the right of the ThinkPad sits a pair of USB 3.2 Gen 1 ports that deliver up to 5Gbps of bandwidth each, a Kensington-style lock port, and a full-sized SD card reader. The card reader is handy for photographers on the go who need to quickly access the files from their cameras without the need for an external reader. As mentioned earlier, we would have liked some Ethernet onboard, but a dock will have to suffice. Due to the way the hinge folds around the back of the unit, there are no ports on the rear of the system.

Right now, Lenovo sells the ThinkPad X1 Extreme with Windows 10 out of the box, with the Home version the default purchase option. Ours came with Windows 10 Pro installed and updated to the latest 21H1 release. Ours came with almost nothing else installed -- no antivirus trials or unwanted bloat. There is, as part of the Windows 10 install, an Office trial, but that can be removed quite easily. Other than that, our control panel just showed drivers and their respective menu options. Once the system was fully updated with Windows 10, we started seeing the Windows 11 upgrade available in Windows Update, although we stuck to Windows 10 for our testing. 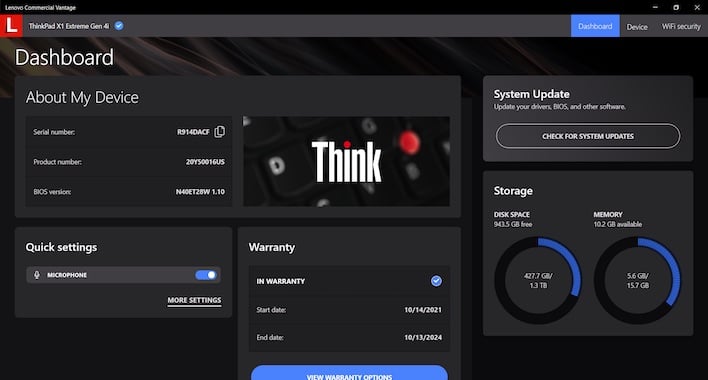 The only extra app at all was Lenovo's Advantage software, which acts as a hub for system management, feature toggles, hardware monitoring, and firmware updates. The tool also shows the specs of our test system and has a number of troubleshooters to try to deal with issues. Finally, users can connect with Lenovo for support issues or warranty service requests.

Now that we've seen the ThinkPad X1 Extreme, let's take it for a spin in our performance tests to see how it holds up. Does that single-channel configuration hold it back? Or can this 16" notebook power through our test suite with style? Let's find out...
NEXT PAGE