Before running our benchmarks, we apply the latest Windows and driver updates to the system we are testing. Other than that, we run all of our tests with out-of-the-box settings. Our goal is to test the system as it ships, but after auto-updating, to accurately reflect what buyers can expect from a retail experience. 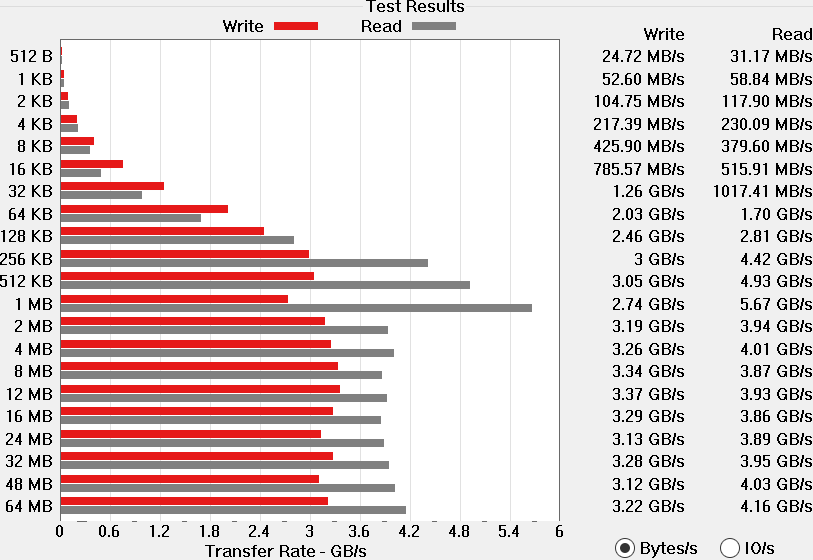 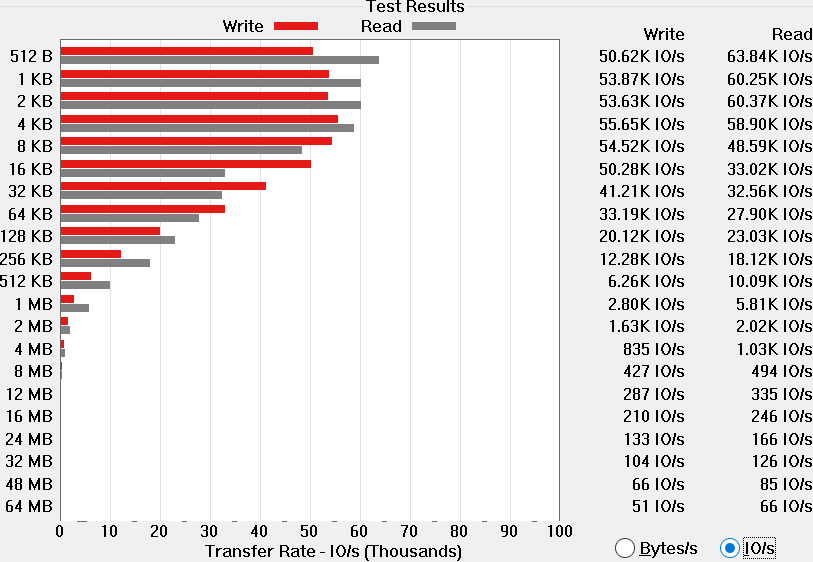 The SSD in the ThinkPad X1 Extreme is a Kioxia KXG7AZNV512G, which is a 512 GB NVMe x4 PCI Express 4.0 SSD in a standard M.2 2280 form factor. Read speeds max out close to 5 GB per second, which is quite good, and writes hit a speed of 3.3 GB per second on the top end. IOPS is about what we'd expect from a drive like this, as well. 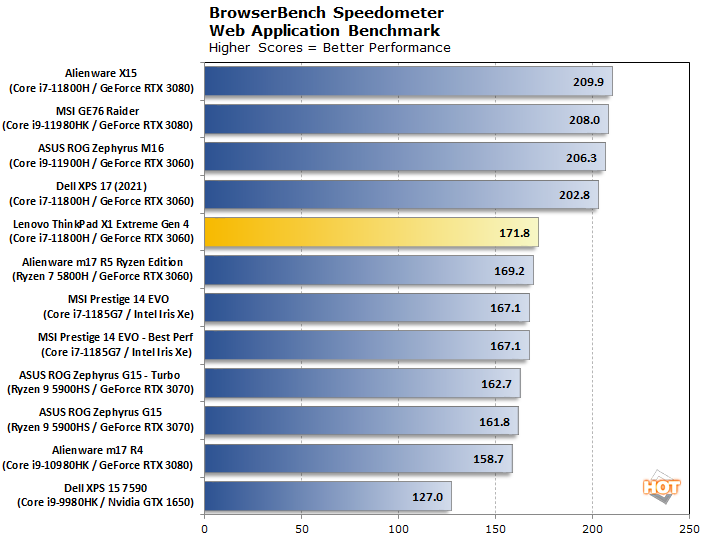 Testing the ThinkPad X1 Extreme is off to a somewhat inauspicious beginning. The Lenovo trails a similarly-configured Dell XPS 17 by a full 20%. Remember that Lenovo shipped us a configuration with a single-channel memory configuration, so certainly some of this can be attributed to that quirk. Since dual-channel options are the same price, it wouldn't cost anything to get some of that speed back, either.

By now we've got enough results in the current version of Cinebench R23 that we feel the previous version, R20, is a bit redundant -- so we didn't run it here. This is the latest 3D rendering benchmark from Maxon, based on the Cinema 4D R23 rendering engine. We tested both single-threaded and multi-threaded performance while rendering the sample scene of an office with hardwood floors and a lot of glass in the windows. 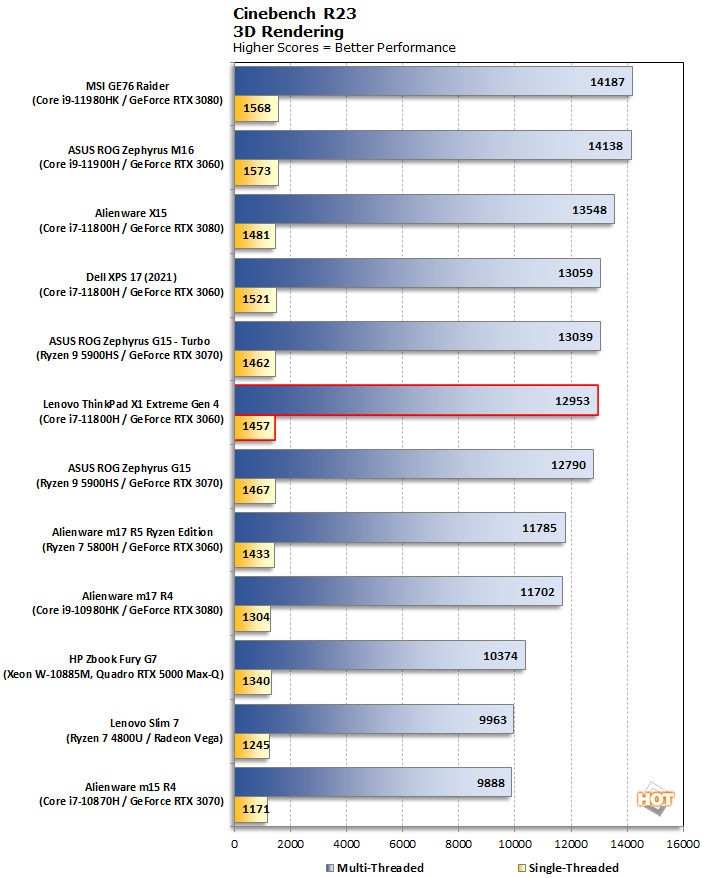 The ThinkPad X1 Extreme somewhat redeems itself after the browser testing. It's still in the middle of the pack here, but this time the deficit compared to the XPS 17 is very small. The much cheaper but similarly-sized ASUS Zephyrus M16 is the value champion of this group, and it's going to be the notebook to watch in this shootout. 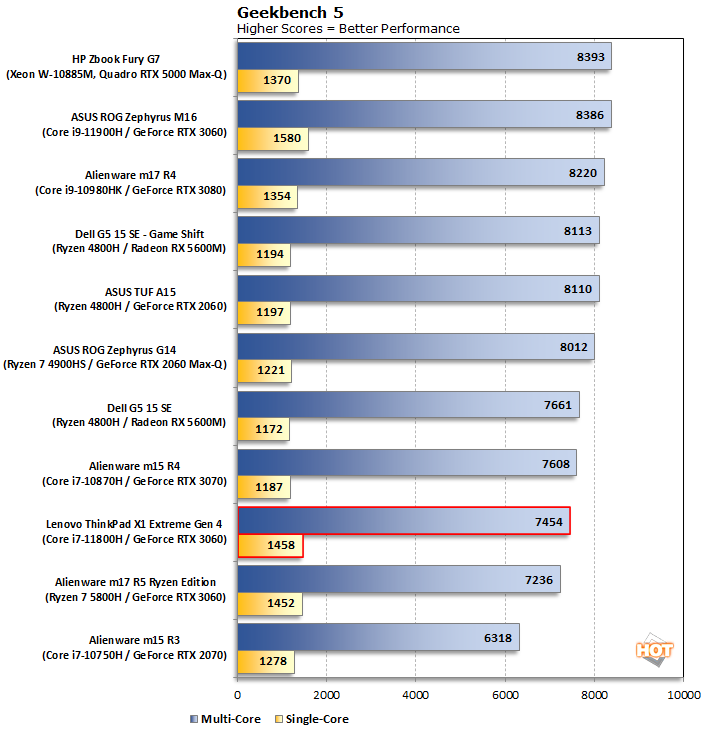 As with Cinebench, the ThinkPad X1 Extreme turns in a very solid single-threaded score but stumbles a bit when the thread count rises. Again this could partially be attributed by the single-channel memory configuration, but the fans were very quick to spin up to fairly loud levels too, which makes us wonder if something else isn't to blame. We'll definitely investigate thermal performance later on. 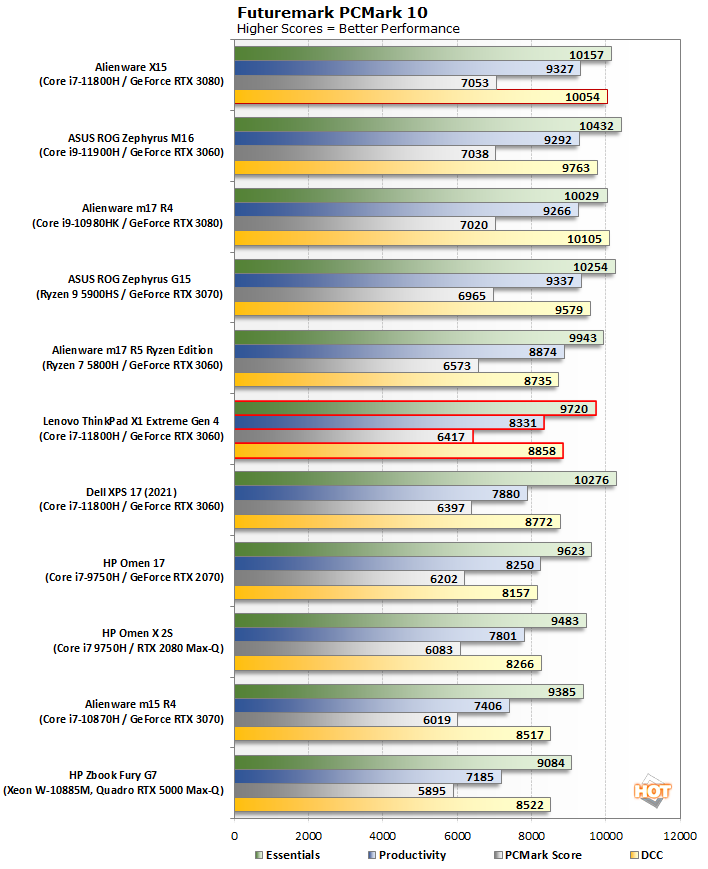 The productivity tests here are again middle-of-the-pack, and the ThinkPad X1 Extreme trails the Alienware X15, which has the same CPU, by close to 10%. The Zephyrus M16 beats out the ThinkPad too, as do a couple of Ryzen-powered machines like the Alienware m17 Ryzen Edition with its Ryzen 7 5800H. Thus far we'd expected a bit more from this system, especially in productivity tests. Let's see what happens when we start fully utilizing the GPU. 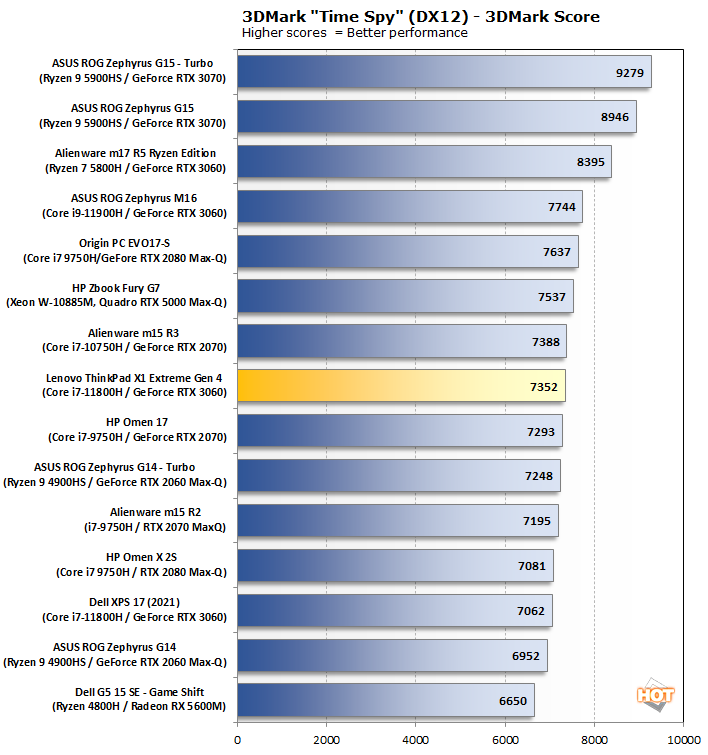 Here is our first glimpse at 3D performance. While the ThinkPad X1 Extreme is no gaming notebook, it does well enough. The Lenovo lands on our charts nestled in between other systems with GeForce RTX 3060 and previous-gen GeForce RTX 2070 graphics, like the Alienware m15 R3 and HP Omen 17. Remember that the ThinkPad's GPU has just a 95 Watt TGP, and that explains why it trails the m17 Ryzen Edition and its 125 Watt budget by a more significant margin. We think this performance is just fine considering the design and thermal capabilities. 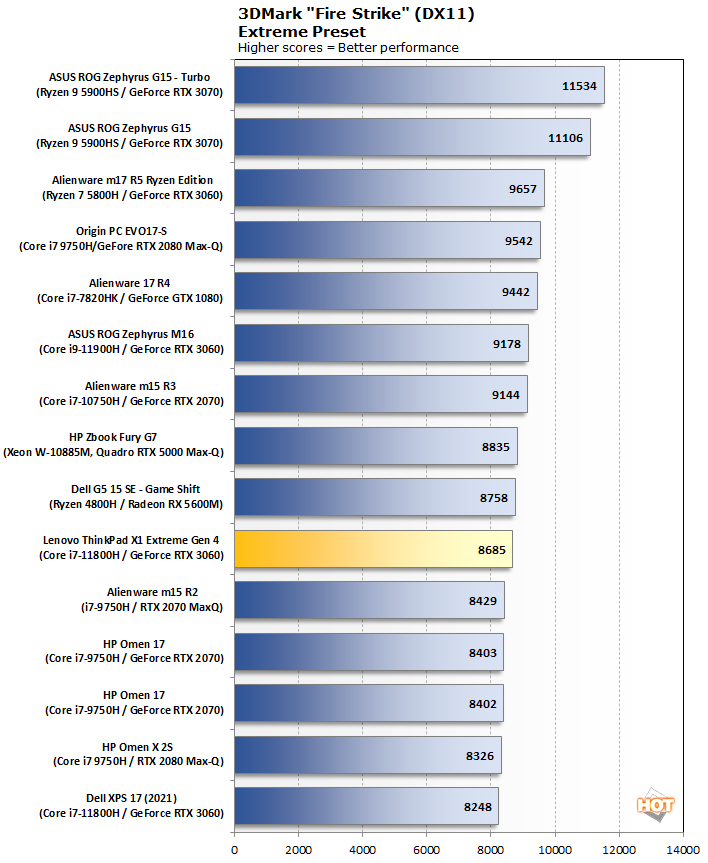 Fire Strike Ultra is a pretty punishing test for notebooks, and the ThinkPad X1 Extreme ends up once again right about where it should be. As has been the case throughout, the ASUS M16 is a bit faster, but we'd be hard-pressed to characterize performance thus far as bad or out of character. 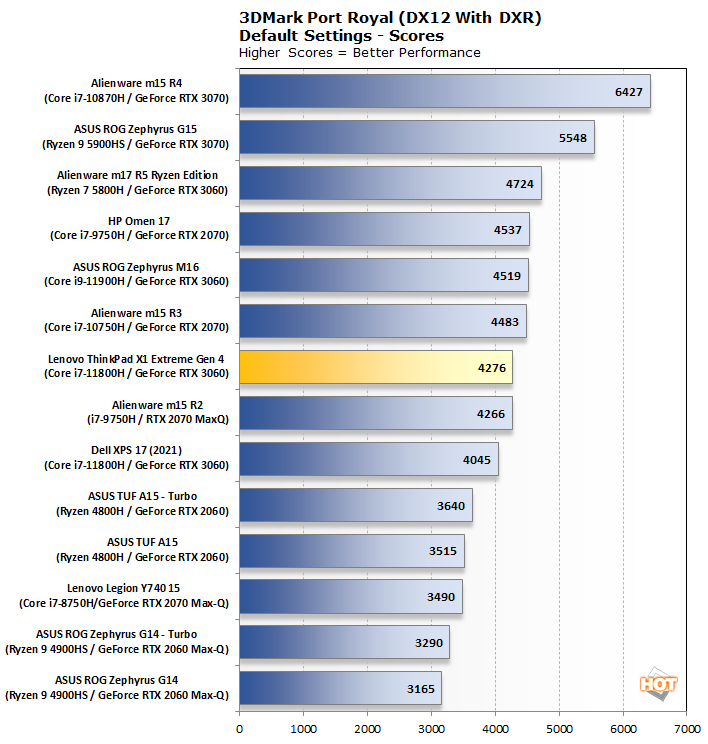 DXR hardware is a prerequisite for this test, so the field is a little smaller. The result is the same, however. The GeForce RTX 3060 inside the ThinkPad X1 Extreme acquits itself nicely enough. This time the system only trails the Zephyrus by around 5%, while more powerful GPUs in the Alienware m15 R4 and ROG Zephyrus G15 beat it out by a much wider margin. 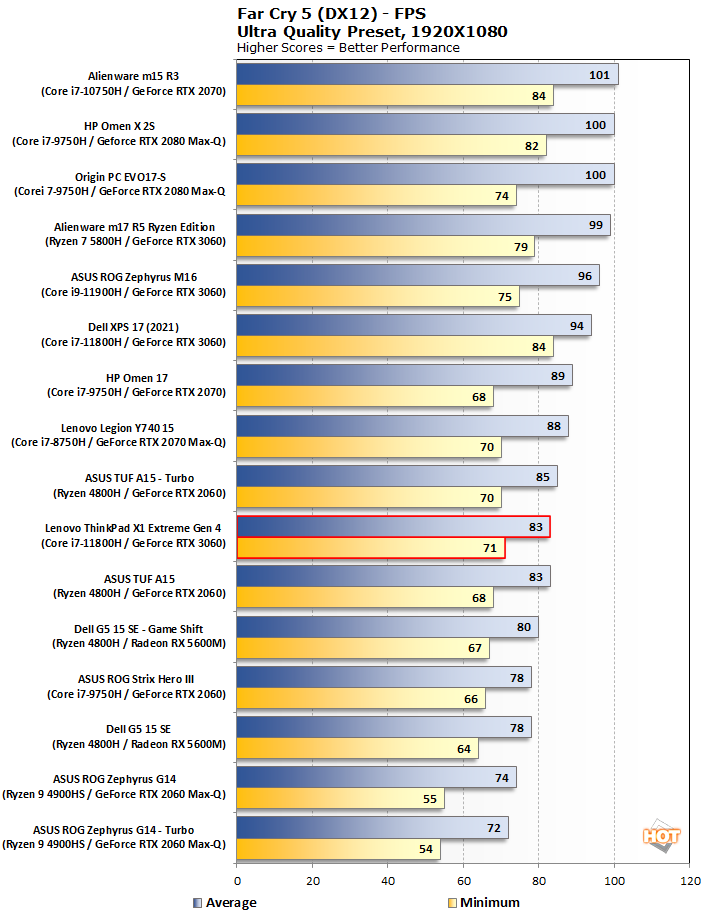 The trend from 3DMark didn't really carry over to Far Cry 5. This time, the ThinkPad X1 Extreme loses out to its GeForce RTX 3060 contemporaries by more than 10%. We're usually GPU limited in most games, so we're not sure that the single-channel memory is really to blame. We hinted earlier, but it's possible the ThinkPad is somewhat thermally limited, and we'll get to that on the next page. 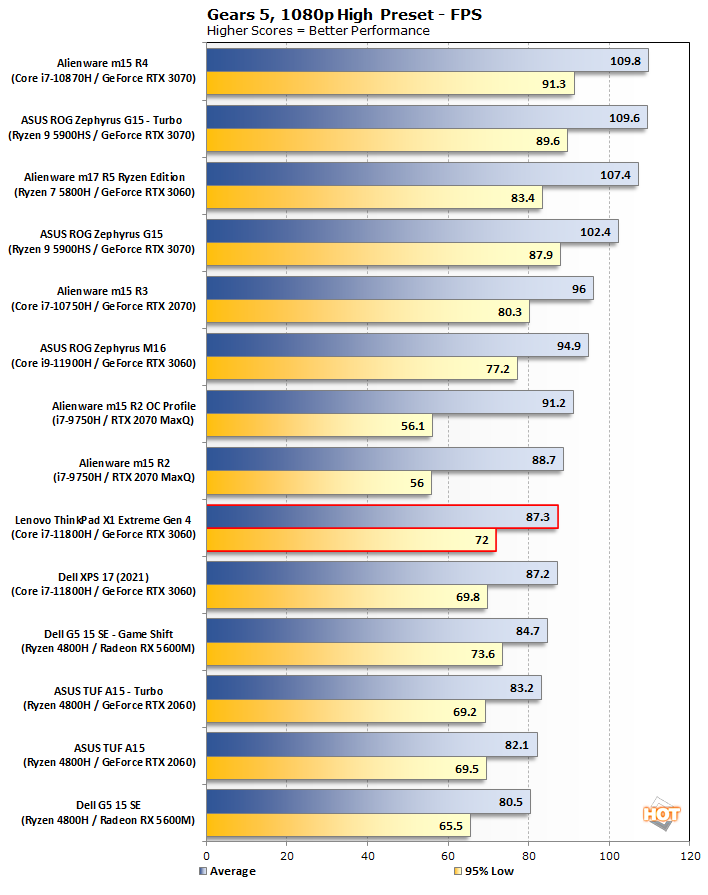 In Gears 5, the margin starts to narrow slightly but it's still around 9% slower than the ASUS system, although it beats out the Dell XPS 17 by a slim margin. Frame rates are pretty solid throughout, and the system is more limited by its 60 Hz 1200p display than it is the GPU. 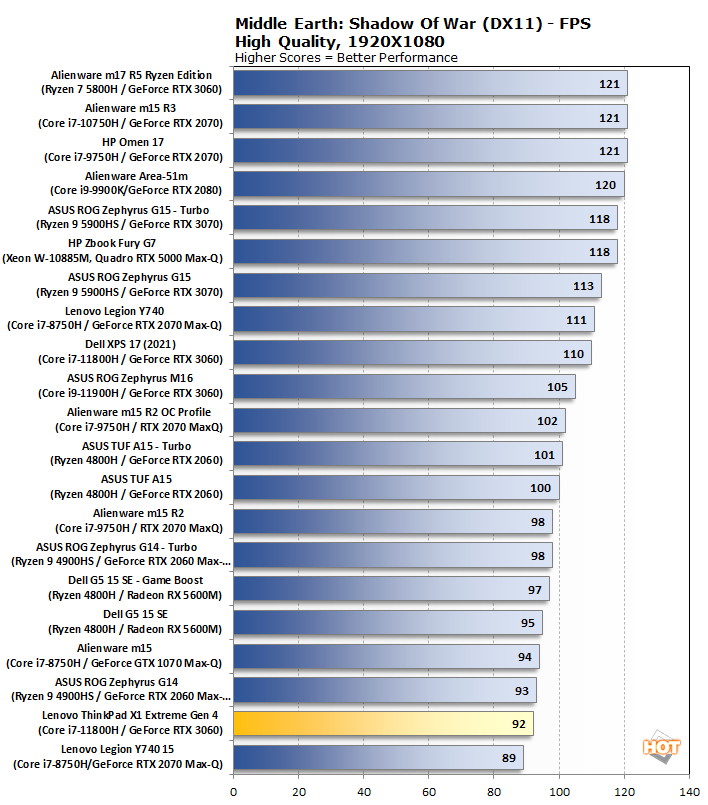 This is a fairly disappointing result, as the ThinkPad X1 Extreme is a full 20% slower than the XPS 17 and only marginally closer to the Zephyrus M16. However, this is where we need to remind readers that we're using the median result; it was actually quite a bit faster the first time through the benchmark closing in on 100 fps. After three runs, we let the system sit for a while and started over. The trend repeated and our median was again just over 90 fps. I hate to spoil the thermal results before we get to that point, but we think you can see where this is going.

Shadow of the Tomb Raider

The finale in the rebooted Tomb Raider trilogy, Shadow of the Tomb Raider is easily the best-looking of the bunch. It's also brimming with Tobii eye-tracking hardware support, and leading edge graphics technologies including DXR shadows and NVIDIA's DLSS super-sampling tech. To test this game out, we again turned the visuals up to the Highest preset and tested at the Full-HD resolution of 1920x1080. 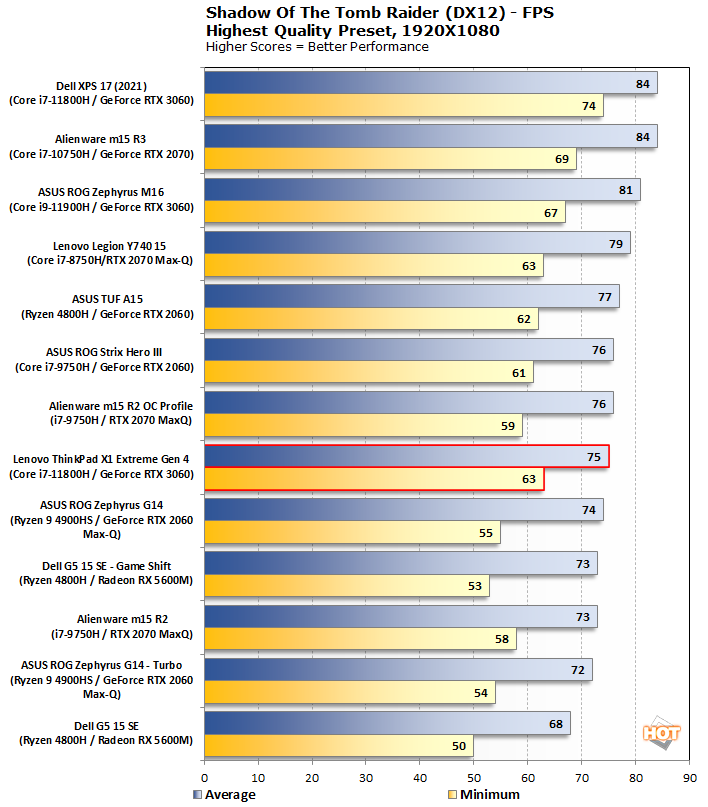 The conclusion of our gaming tests is a bittersweet end to what has been a fairly mediocre tale. The ThinkPad X1 Extreme was never able to completely hang with its 95 Watt RTX 3060 companions by the time it got through three runs of our tests. 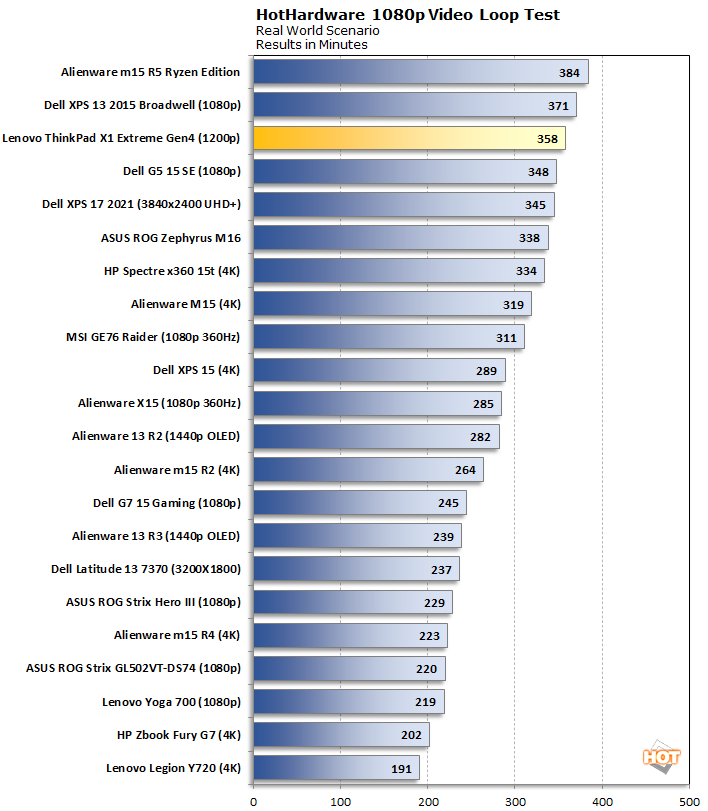 Video playback battery life on the ThinkPad X1 Extreme is quite solid. We got just about a full six hours of playback out of the system and its 90 Watt-hour battery. That beats both of the systems to which we compared the Lenovo earlier on. Both the ASUS Zephyrus M16 and Dell XPS 17 trail this notebook by a slim margin. None of those systems has bad battery life, but Lenovo's is just a bit better.

Next up, let's tear this puppy down to see how it keeps cool, and then render our final verdict.
PREV PAGE NEXT PAGE