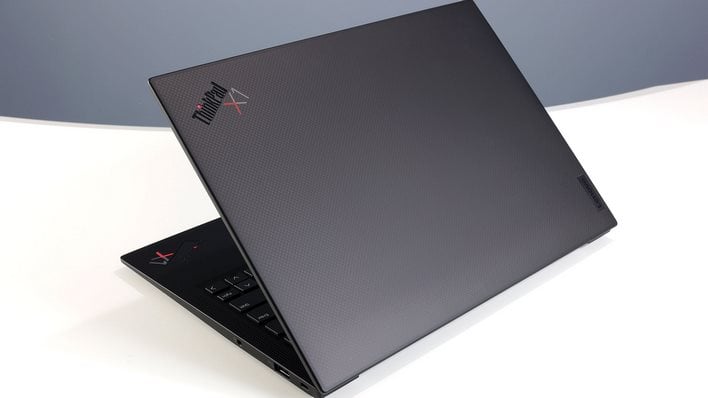 Lenovo's venerable ThinkPad X1 Carbon has been one of the longest-running of the company's trusted business-class laptop series. Now in its 9th generation, Lenovo sought to re-energize the X1 Carbon not only with Intel 11th Gen Core Series processors (Tiger Lake), but with Intel Evo certification that brings with it a number of key refinements. The machine that we have on tap for review here today also includes an impressive new 16:10 format UHD+ (3840X2400) display.

Though the ThinkPad X1 Carbon Gen 9 retains its unmistakably classic and understated hybrid carbon fiber weave and magnesium alloy body, weighing in at a feather-light 2.49 pounds, we're now also treated to a single, unified hinge design, a wider touchpad, an improved Dolby Atmos enabled speaker system and enhanced security features with optional IR camera and human presence detect. This latter technology that is freakishly-adept at what it's design to do. More on this later, but for now let's take a guided video tour of the new Lenovo ThinkPad X1 Carbon Gen 9...


Quickly perusing the specs, we've got a standard issue Core i7-1186G7 Tiger Lake CPU under the hood, along with 16GB of soldered (unfortunately but not uncommon in this form factor) LPDDR4x-4266 DRAM and a 512GB NVMe SSD. The storage subsystem is serviced by a PCIe Gen 3 SSD, and though we'd prefer some of that glorious bandwidth of PCIe Gen 4 alternatives available these days, it's obvious that manufacturers are going with some lower cost options that top out at 3GB/sec, which is typical of a PCIe 3 SSD. We'll dig into specific storage performance later but beyond CPU, memory and storage, there are a nice assortment of IO options here as well.

The ThinkPad X1 Carbon Gen 9 has a pair of full 40Gbps Thunderbolt 4 ports, along with two USB Type-A ports, both of which are USB 3.2 Gen 1, as well as a full-sized HDMI 2.0 port, a combo headphone/mic 3.5mm jack an a Nano-SIM slot for optional 4G LTE connectivity. If ONLY there were a MicroSD card slot, Lenovo, your port selection would be el perfecto, but you knew that because we've asked for it over and over. 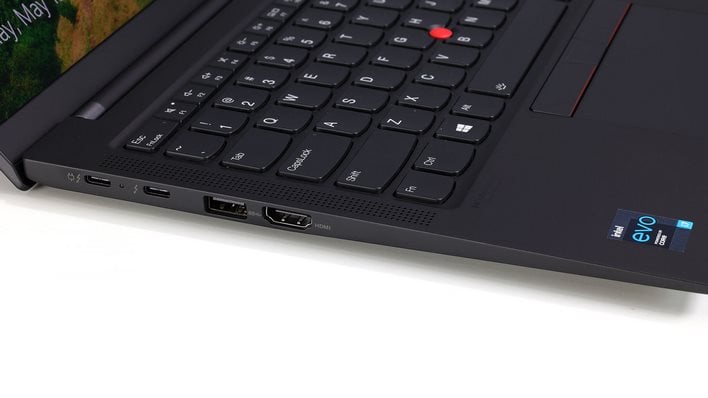 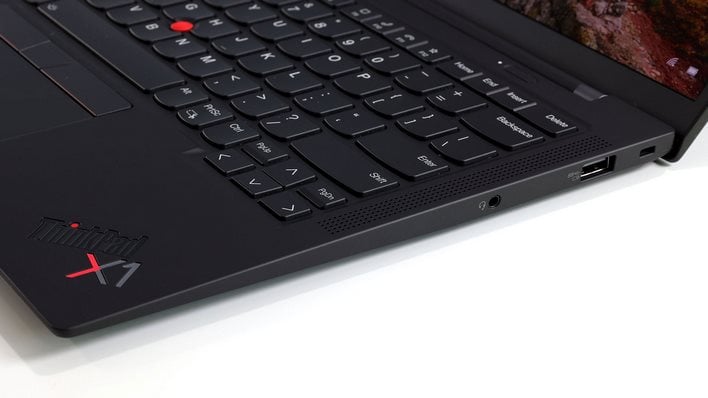 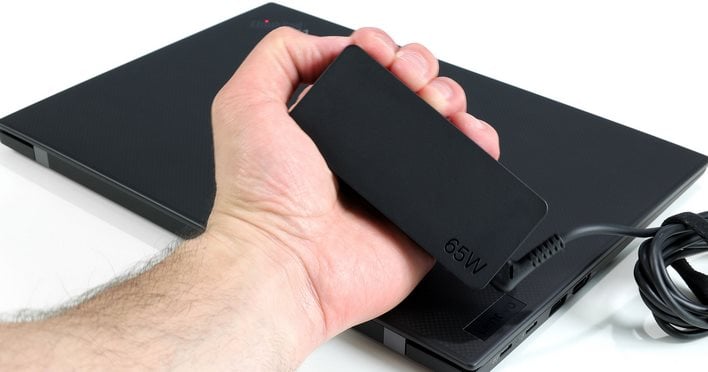 Lenovo's 65 Type USB-C Power Adapter Is Still Plenty Petite
The other smaller caveat here is that both of those Thunderbolt 4 ports, which can be used for charging, are located on the same left edge of the machine. Unfortunately, this makes for less flexible charging cable positioning, unlike Dell's XPS 13 2-in-1, and similar machines from the company, that offer USB-C charging from either side edge of the machine. It's a small, thoughtful design choice that we're hopeful Lenovo will see clear to making the same decision some day as well.

In terms of its sound system, the Dolby Atmos-enabled, quad-driver setup in the new X1 Carbon has two up-firing midrange drivers/tweeters on either side of the keyboard and two down-firing woofers on the undercarriage of the machine. Acoustically, the system sounds decent with good volume output and impressive spatial separation. However, it does lack the bass response of competitive machines like Dell's XPS 13. It's a reasonably-equipped sound system that'll will serve most mainstream consumers just fine, though audio aficionados will want to connect some buds or cans.

ThinkPad X1 Carbon Gen 9 Keyboard - The Best In The Business

Ahh, but then there's the ThinkPad X1 Carbon's usually fantastic keyboard. We've said this before many times and we'll say it again here; when it comes to laptop keyboards, especially ultralight machines, Lenovo's ThinkPad line is the best in the business. Period. Cue mic drop. 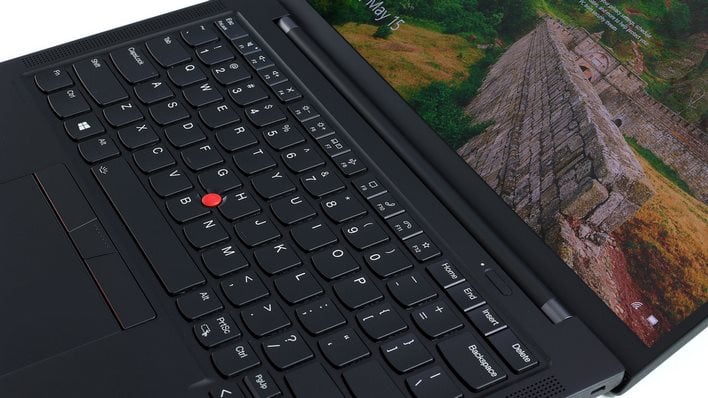 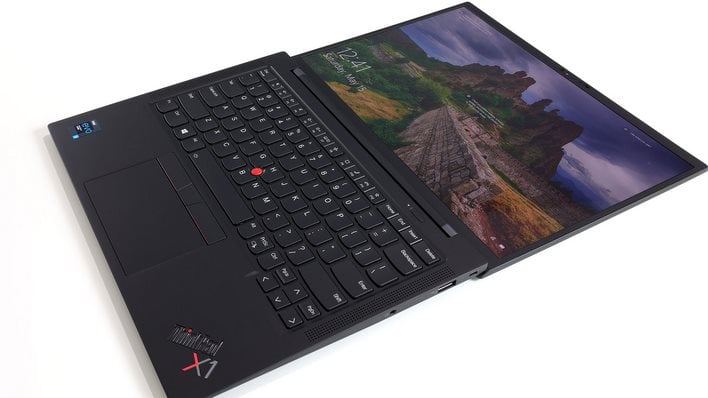 Though this machine sports a 14.9mm Z-height thickness, it's delightfully springy and deep key travel and contoured, shaped key caps make typing on this laptop a real pleasure. It's that good. Lenovo is also laying claim to a 10%-wider track pad, which also comes trimmed with a three-button mouse complement. Really, along with its iconic red trackpoint nub, when it comes to laptop user interfaces, Lenovo's LED backlit ThinkPad X1 Carbon keyboard is, in a word, fantastic.

And on the back edge of the new X1 Carbon's keyboard deck is a fingerprint reader-equipped power button, as well as a new single contiguous hinge design that feels pretty solid as well. The hinge articulates 180 degrees to a full flat position and has a smooth but firm swing motion that is light enough to be able to open the machine one-handed. Lenovo designed the hinge mechanism to be firm enough such that there is zero slop or stiffness either way when opening the or closing the lid, and this machine's 16:10 format display is also flanked with relatively thin bezels, as you can see here. 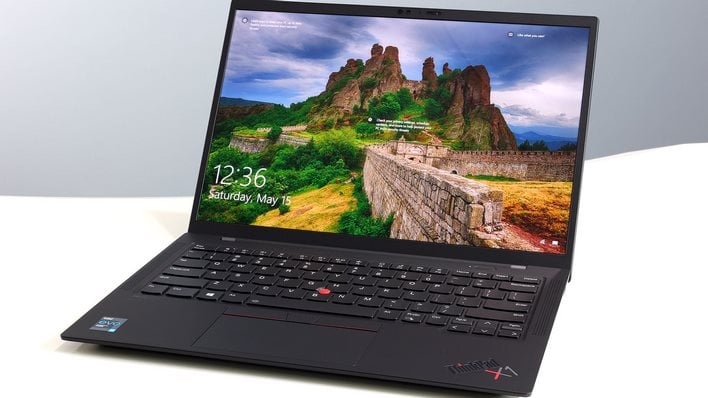 The X1 Carbon Gen 9's display, at least the one we're looking at here, is also something special. Sporting a native 3840X2400 resolution, with a 16:10 aspect ratio, this 4K display option is not only low blue light TUV Rheinland certified, it's also Dolby Vision certified and offer 500 nits of punchy brightness with great contrast as well. It really is a beautiful display and though Windows suggests a ridiculous 300% scaling for its 4K res on this 14-inch touch-enabled panel, we found that 200% was about the right compensation level for efficient use of real estate, along with the best eye comfort. However, as beautiful as this display is, we do wish Lenovo offered a 1440p or 1600p (2560X1600 in 16:10 format) option, in addition to the FHD+ (1920X1200) versions they offer, as that is what we feel is the ideal resolution for the 13 to 14-inch laptop category.

ThinkShutter Privacy And The IR Camera Knows When You're Paying Attention 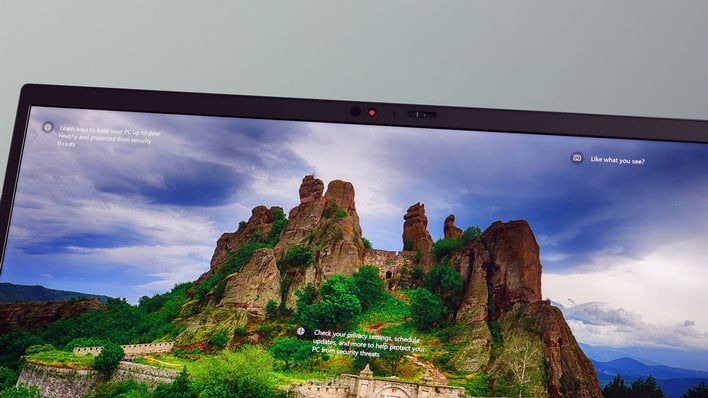 Lenovo Privacy ThinkShutter And IR Human Presence Detect Camera
The other well-executed features of this Lenovo display option are its ThinkShutter privacy switch that closes off the camera without the need for tacky tape when you want to ensure prying eyes don't have access to your camera, and also its optional IR Camera with Human Presence Detection technology. As we eluded to earlier, the presence detect feature on this laptop is so well engineered that you can have the machine sitting next to you, look away, and it will power down its display one second, then glance back at it the next the next second, and the thing wakes up, as if to say, "yes human? How many I assist?"

Lenovo's ThinkPad Smart Assist technology is the best human presence detect implementation we've seen yet, beyond Dell's Latitude line that has done a reasonably good job with proximity based sign-in as well. 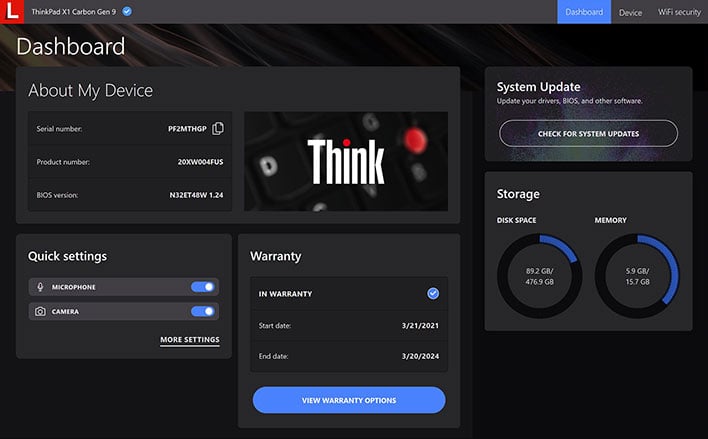 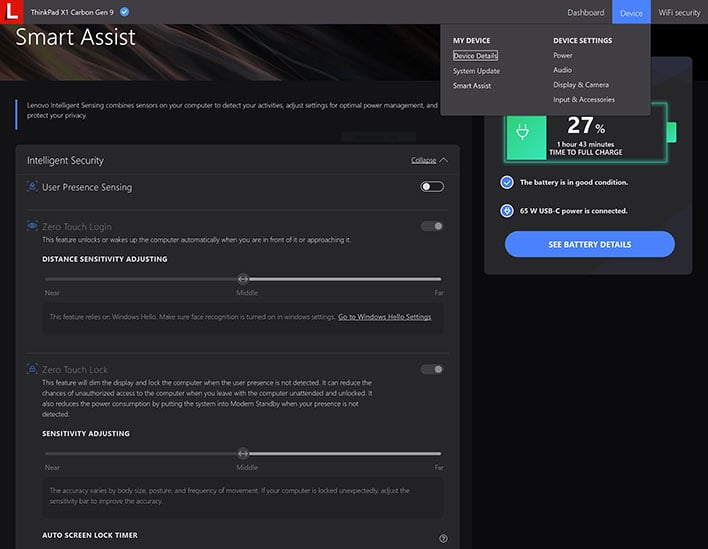 Finally, all of this functionality and more can be dialed in to your liking via Lenovo's ThinkVantage app. From system firmware and software updates, to system health and resource monitoring, as well as ThinkPad Smart Assist configuration, it's all in here with an intuitive, organized interface.

Well then, that should give you a good sense of the creature comforts of the new ThinkPad X1 Carbon Gen 9. What do you say we fire it up on the test track? Benchmarks are next...
NEXT PAGE