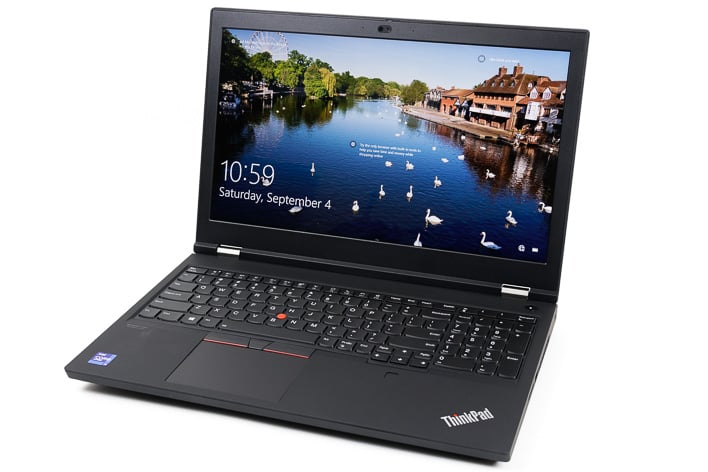 If there was a poster child for business-class laptops, it is indisputably the Lenovo ThinkPad. ThinkPad notebooks are well known for their matte-black, no-nonsense designs, but their utility in corporate and industrial settings is more than skin-deep. Lenovo has wisely developed an array of ThinkPad models to address a wide range of use cases, while still being able to keep that distinct ThinkPad feel. This familiarity yields a dependable experience which has cultivated a dedicated following. We have recently reviewed several svelte ThinkPad X Series variations, but today’s offering is more of a burly beast. The Lenovo ThinkPad P15 Gen 2 is a mobile workhorse with its sights set on peak performance in professional applications, design and content creation.

Lenovo positions their P Series of workstations as “powerful enough to take with you, but with advanced technology to tackle the most intense computing tasks.” The company aims to fulfill this in three main ways: build a sturdy yet still lightweight chassis, fill it to the brim with cutting-edge hardware, and secure ISV certifications to ensure it works smoothly with the most demanding applications. The ThinkPad P15 in for review today seems well suited to reinforce this but let's dig in a bit more to see what it's made of and how it measures up to these goals. 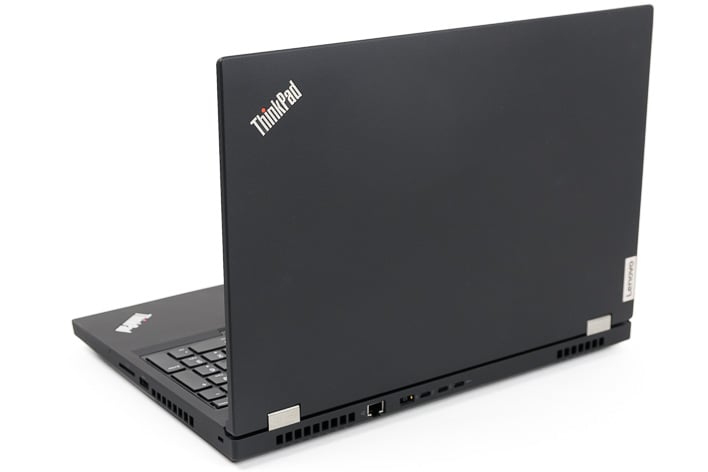 The ThinkPad P15 Gen 2 starts with an Intel Core i5-11500H processor, but can be outfitted with up to either an Intel Core i9-11950H or a Xeon W-11955M. These two CPUs are largely identical on-paper, but the Xeon includes Error-Correcting Code (ECC) memory for mission-critical tasks, while the Core series CPUs do not. Speaking of memory, the system can support a healthy 128GB of 3200MHz DDR4 RAM in either ECC or non-ECC flavors. Likewise, the base model utilizes an NVIDIA T1200 (4GB) GPU, but can also ship with up to NVIDIA’s strongest RTX A5000 Max-Q (16GB) GPU.

NVIDIA’s mobile professional graphics processors are built on the same Ampere architecture as their GeForce cousins. In fact, this RTX A5000 comes from the same GA104 chip used in the GeForce RTX 3080. Both GPUs feature 6,144 CUDA cores, 48 RT cores, 192 Tensor cores, and 16GB of dedicated GDDR6 memory. However, that does not mean we will have a direct apples-to-apples comparison between systems with these chips. While formal Max-Q variants have been abandoned by NVIDIA, they do allow manufacturers to tune the TDP and optionally incorporate technologies like Whispermode 2.0 and Dynamic Boost 2.0. Lenovo’s choice to continue marketing these laptops as “Max-Q” suggests a slant on the side of efficiency rather than performance.

In any case, our test system arrived with an Intel Core i9-11950H (8 Cores, 16 Threads) CPU, NVIDIA RTX A5000 GPU, 32GB of 3200MHz DDR4 memory, and 1TB PCIe 4.0 KIOXIA XG7 SSD. While RAM and storage capacities could be bumped further, this configuration represents about the highest level of performance this system should be capable of. For the rest of its specifications, check out the table below.

Unlike most tough notebooks, the ThinkPad P15 Gen 2 does not look part. Its design, like that of all ThinkPads, is timeless. Boxy stylings harken back to ThinkPad line's roots, and yet the ThinkPad P15 looks just as at home in a boardroom as it does on an engineer's desk. It is built for function and to function.

Lenovo indicates the top cover is constructed of a mix of polyphenylene sulfide (PPS) and glass-fiber material. PPS is generally tolerant of a wide variety of conditions, but can be brittle which the glass-fiber likely helps combat. The result is a matte-finish with a soft touch feel, but it does show oils from fingerprints pretty readily. The bottom cover substitutes out the PPS for a nylon and glass-fiber blend which has more grip to its feel. 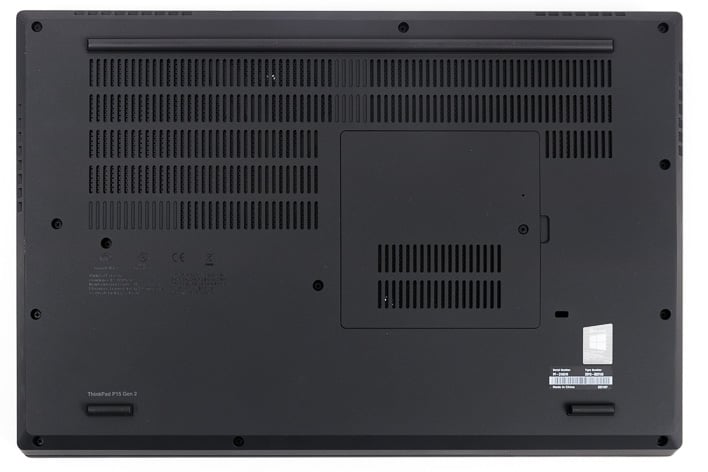 Internally, the ThinkPad P15 uses a magnesium frame. Magnesium is a popular choice for ruggedization as it is lighter than aluminum, but retains very high tensile strength. These materials contribute to the ThinkPad P15's MIL-STD 810G durability rating. In theory, this means the system is "combat-ready" but in practice means it should stand a chance if you splash your latte on it.

The ThinkPad P15 does have some reasonable heft to it at just over 6 pounds and 1.24" thick. This is not a machine that will be inconspicuously slipped into a bookbag, but isn't so large that you would think twice about bringing it along either. 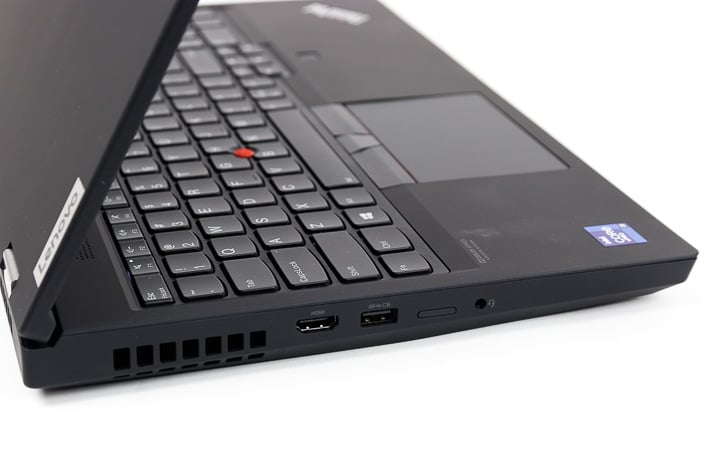 Port selection is ample for a workstation-class machine. The left side of the notebook offers a single USB-A 3.2 Gen 1 port, HDMI 2.1 port, nano-SIM tray, and a headset combo jack. This USB-A port can be configured to be “always on” which can allow the ThinkPad P15 to charge your phone or other devices while stowed in a bag. 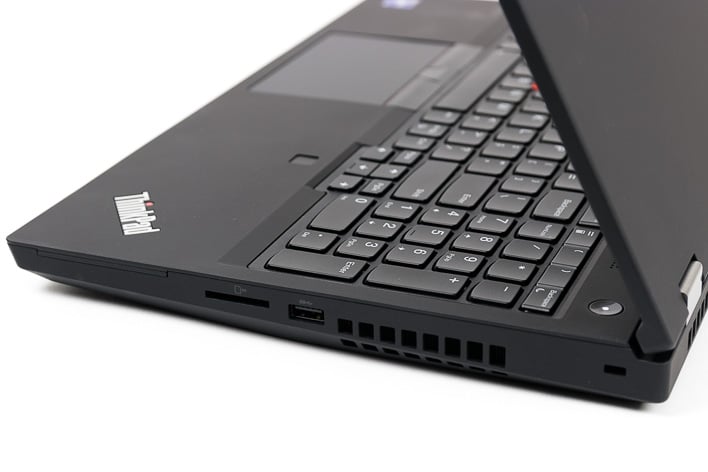 The right side of the notebook is more bereft of ports, but has a vital inclusion. In addition to a second USB-A 3.2 Gen 1 port and Kensington lock slot, this side also has a full-size SD card slot. It feels like we often nitpick about Lenovo leaving out any kind of SD card reader, or sticking it in an awkward spot, so it is very welcome to find it included here. Lenovo also offers an optional Smart Card reader which would slip in just under the palm rest. 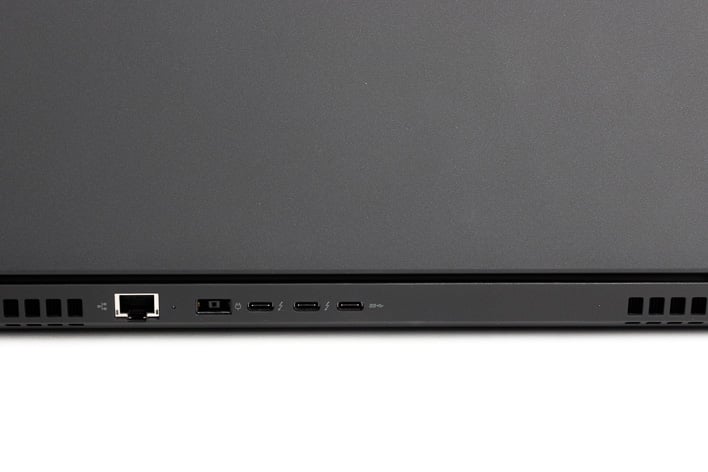 If this were an ultrabook, we would likely be done with ports, but the ThinkPad P15 is not. Turning around to the backside reveals an Ethernet (RJ45) jack, Lenovo’s AC Power port, two Thunderbolt 4 (Type-C) ports, and a USB-C 3.2 Gen 2 port. The Thunderbolt 4 ports are a very welcome inclusion for everything from extending high-resolution external display options to enabling high-speed data transfers from external storage.

The only additional I/O we could really ask for would be a couple more Type-A ports in the rear, but realistically a notebook like this would be tethered to a docking station. Docking stations are especially great for reducing cable-clutter and easing the transition between desk work and field work. 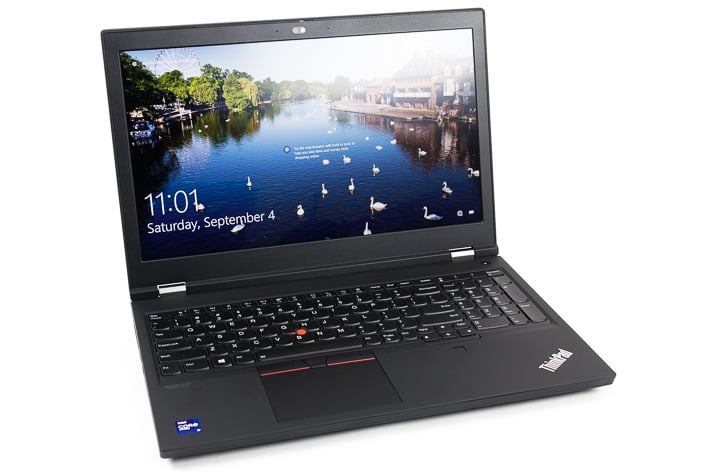 Lenovo offers four display options for the ThinkPad P15. The first two are both 1920x1080 60Hz IPS panels. The base version is rated for 300 nits brightness and the other reaches 500 nits while incorporating Dolby Vision. Dolby Vision is a HDR format akin to HDR10 which offers certain advantages for color accuracy, but requires a supported display. Our test unit uses the 500 nit FHD panel. While unassuming from a technical perspective, we are impressed by the panel’s uniformity and viewing angles. We also could not detect any flicker associated with pulse-width modulation that can sometimes plague certain users who are sensitive to it.

The remaining two screen options are both 3820x2160 60Hz with Dolby Vision, but offer more differentiation than just brightness. The first of the 4K options is a HDR400 certified IPS panel which is rated to achieve 600 nits of brightness. The second is an HDR500 True Black certified OLED multitouch panel which is sure to attract content creation professionals. It is rated for 500 nits peak brightness, but the significantly better contrast ratio of OLED allows for the better HDR designation. Apart from being the only touch panel of the bunch, this display is also able to cover the entire DCI-P3 color gamut and is X-Rite Pantone factory color calibrated right off the bat. Factory color calibration does assume certain environmental lighting conditions though, so serious users will still be best off running their own calibration on location. 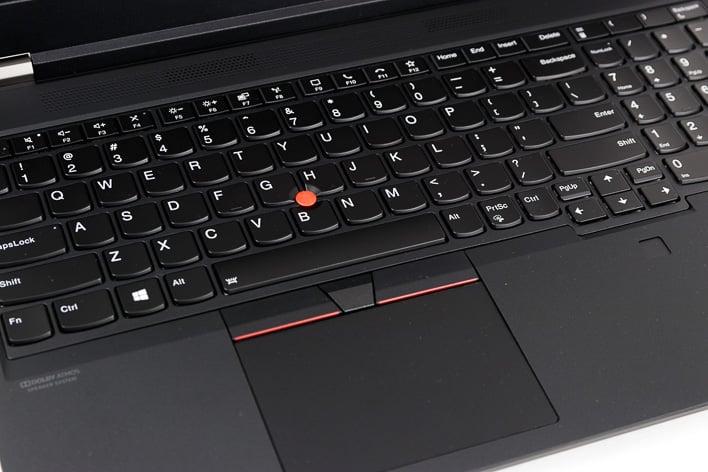 It almost goes without saying that the typing experience on this laptop is lovely. Lenovo’s notebook keyboards are among the best on the market. This keyboard features 1.8mm of key travel with a consistently crisp feel. Even the spacebar presses evenly when depressed from the extreme edges. The key caps are subtly curved which helps feel out where your fingers are on the plank. The most welcome part of all of this is the inclusion of a 10-key without having to noticeably downsize down the rest of the keys.


Conversely, the 720p webcam onboard is bog standard. It does incorporate Lenovo's privacy shutter to physically cover the lens when not in use, but is otherwise unremarkable. Its image is acceptably detailed enough to get through a Zoom meeting, but it appears rather blotchy and colors are washed out. It is a laptop webcam, it does the job.

The Lenovo ThinkPad P15 ships with a reasonably clean build of Windows 10 Pro. The system has just a few Lenovo applications pre-installed. Otherwise, the only other pre-installed applications are Dolby Access, NVIDIA’s RTX Experience and accompanying RTX Desktop Manager.


The first Lenovo application is Vantage. Vantage serves as the hub for all the information about the notebook, from serial number and warranty information to driver updates and customization settings. As far as OEM system applications go, Vantage feels appropriately stripped down and to the point. Vantage provides control over the auto-installation of updates including a distinction between recommended and critical updates.


The next is Lenovo's Quick Clean utility. While this sounds like a file cleaner application, it is not. Instead, Quick Clean locks out the device's controls for a length of time chosen by the user so the device can be physically wiped down. This allows the device to be cleaned more easily without having to shut it off which can be handy in scenarios where it needs to be cleaned after every customer visit, for example.

Finally, the Lenovo VDM application leverages optional AR glasses to render additional screens in virtual space. With VDM, the glasses track the laptop's screen and projects more screens around it in customizable configurations. We do not have the ThinkReality A3 glasses on hand to try this for ourselves, but we could see this being handy to extend screen real estate in places where physical space is limited.


For alternative screen customization, users can leverage the RTX Desktop Manager. This application from NVIDIA allows users to intuitively slice up their display into regions and quickly arrange applications accordingly. Once a template is set, simply hold Ctrl while moving a window to view the template overlay and choose where to position the application. Admittedly this is more useful on high resolution displays, but even with a 1080p panel like ours, users will likely be docking the device to take advantage of larger displays when possible.

We like Lenovo's approach to bundled software here. The limited software package out of the box is all appropriately relevant to professional users. We could see most users removing the VDM application, but it only occupies 127 megabytes which is not exactly a burden. Otherwise, users can dig right into installing their own applications to make the device their own.