NVIDIA has released a bevy of GeForce RTX 30-series graphics cards for desktop PCs of the last few months, but gaming notebooks have remained chained to the previous-generation GeForce RTX 20 family. That all changes today, however, as the company just announced new GeForce RTX 30 mobile GPUs based on its latest Ampere GPU architecture. These GPUs should slot into laptops at a variety of price points, so gamers of virtually any budget should find something of interest. Let's dig in...

The first member of the family is the mobile GeForce RTX 3060. NVIDIA says that the GeForce RTX 3060 will deliver 90 frames per second on the latest games with the highest settings at a resolution of 1080p. NVIDIA is also claiming that this notebook GPU is faster than even the previous mobile king GeForce RTX 2080 SUPER, which typically sold in notebooks costing upwards of $2,500. Speaking of pricing, notebooks with an RTX 3060 should start at $999. Gamers looking for mid-range 1080p gaming notebook should be excited to hear that.

Next up is the mobile GeForce RTX 3070, which NVIDIA claims should deliver the same 90 fps and max detail, but at a resolution of 1440p. Notebooks with a GeForce RTX 3070 purportedly deliver 50% better performance than notebooks based on the previous-generation GeForce RTX 2070. GeForce RTX 3070-equipped notebooks should start at retail prices in the $1,299 and up range.

At the top of NVIDIA's mobile GPU stack sits the GeForce RTX 3080, which will have up to 16 GB of GDDR6 memory. Desktop RTX 3080 cards have 10 GB for their 320-bit memory bus, so this figure probably indicates that mobile 3080s will have a 256-bit path to memory. Still, they should be plenty capable, as the top dog in the lineup will apparently deliver 100+ fps at 1440p with all the details cranked to the maximum. The GeForce RTX 3080 will find its way into notebooks that start at $1,999.

To deliver the most performance in a given thermal and power envelope, NVIDIA created the Max-Q series of mobile GPUs with the GTX 10 series. That tradition continues today, as all of these mobile graphics solutions will also have Max-Q variants. NVIDIA has some changes in store to optimize power budgets across the CPU, GPU, and video memory, however. The company trained an AI model to dynamically choose the best division of labor with its Dynamic Boost 2.0 algorithm. Meanwhile, WhisperMode 2.0 is a new method of controlling acoustic performance, which NVIDIA says is custom-built for each notebook based on its cooling system and other factors.

To combat AMD's Smart Access Memory, which can have an occasional noticeable impact on the performance of Radeon RX 6800 graphics cards, NVIDIA has announced it will also support Resizable BAR. Rather than give it a fancy marketing name, NVIDIA is calling this feature what it is. Resizable BAR is part of the PCI Express 3.0 spec added in 2008, but it took AMD implementing it in Big Navi for it to come to light. We're glad to see NVIDIA add Resizable BAR support, as it said it would back in November. 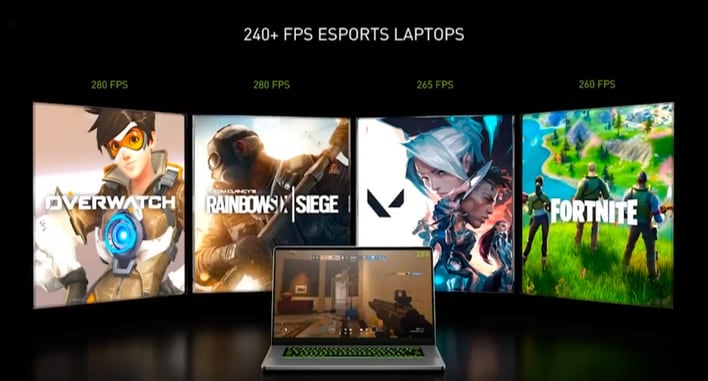 As noted in its blog post, NVIDIA's proprietary tech has also made the jump to mobile, just as it did with mobile Turing GPUs. That means all of the GPUs introduced today can use NVIDIA's AI-assisted DLSS 2.0 anti-aliasing method. Notebooks with these GPUs will also support NVIDIA Reflex, which brings total system latency down so that input gets processed faster. This is a big deal for competitive Esports, and NVIDIA says GeForce RTX 30 notebooks should be able to hit 240 fps or more, depending on settings and the specific model.

NVIDIA says that notebooks with GeForce RTX 30 GPUs are coming very soon from a wide variety of vendors. Acer, Alienware, ASUS, Gigabyte, HP, Lenovo, MSI, and Razer should all have models available starting January 26. Many boutique vendors, including Falcon NW, Maingear, Origin, and more will also have notebooks boasting Ampere graphics. GeForce Studio notebooks with Max-Q GPUs will also be on offer from many of these same vendors. Pricing will, of course, vary by region and by the specific configuration of each notebook.

Stay tuned for more details as these notebooks start to launch.