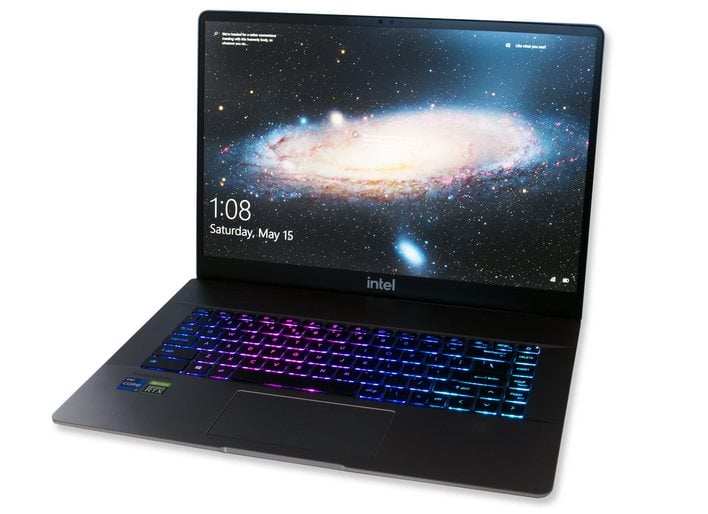 Last week, Intel officially unveiled its Tiger Lake-H45 based H-Series 11th Gen Core processor line-up, for high-performance gaming laptops and mobile workstations. The flagship consumer processor in the family is the Core i9-11980HK. The Core i9-11980HK is an 8-core / 16-thread processor, with a base clock of 2.6GHz and maximum turbo clock of 5GHz on one or two cores, when Intel’s Turbo Boost technology kicks in. The Core i9-11980HK supports DDR4 memory at speeds up to 3,200MHz, but this particular “HK” processor is also fully unlocked and overclockable via Intel’s XTU utility. 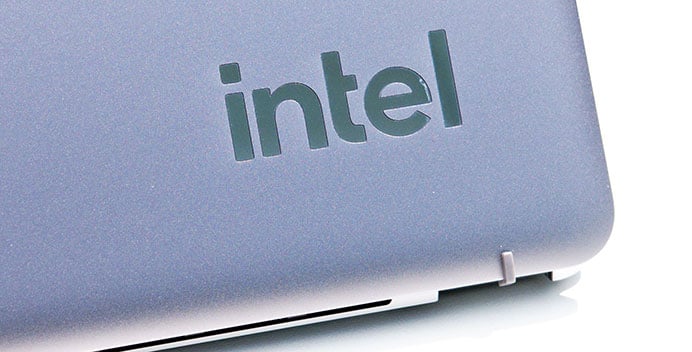 The platform features all of the latest IO and connectivity technologies as well, like Killer Wi-Fi 6 / 6E networking, Thunderbolt 4, and support for Resizable BAR, thanks to Intel’s close collaboration with NVIDIA on this launch. In addition to the aforementioned platform benefits, Tiger Lake-H processors like the Core i9-11980HK also feature 20 reconfigurable PCI Express 4.0 lanes attached directly to the processor. Those lanes can be configured in a number of ways, e.g. x16 / x4 or x8 / x4 / x4 / x4. The latter configuration is interesting because it offers plenty of bandwidth for a discrete GPU, while also enabling PCIe 4.0 NVMe RAID across multiple M.2 slots, which is a first for any mobile platform. Up to 24 additional Gen 3 PCI Express lanes will also be available through the PCH (Platform Controller Hub), which opens up a myriad of opportunities for Intel’s partners to integrate a wide array of peripherals into their systems.

We detailed the launch announcement last week, but have something special to share with you all today. Although we’ve only had it in-hand for a very short time, we got our mitts on an Intel-branded reference notebook, packing the flagship a Core i9-11980HK CPU and an NVIDIA GeForce RTX 3060 GPU. This particular notebook isn’t destined for retail, but it should be representative of what Intel’s partners can do with Tiger Lake-H. 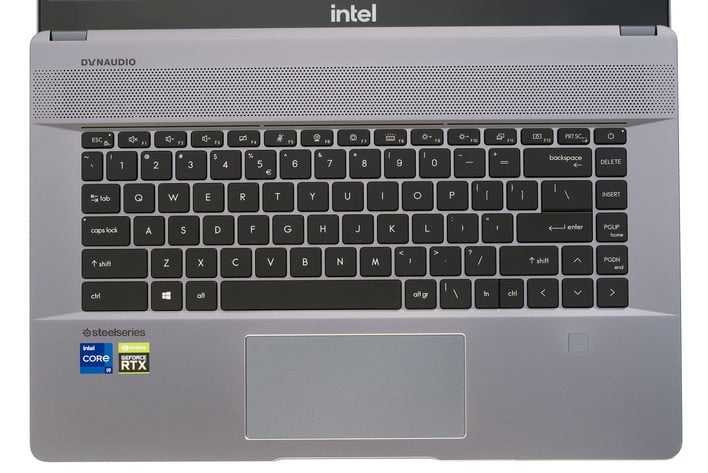 This machine is what Intel has called a “thin-enthusiast” class notebook. It is less than 20mm thick and exploits all of the features of the Tiger Lake-H platform, in a svelte 15.6” form factor. In addition to the aforementioned Core i9-11980HK and GeForce RTX 3060, this machine features 32GB of DDR4 RAM and dual Phison-E16 based 512GB NVMe SSDs. The display has a 16:10 aspect ratio with native resolution of 2560x1600, the keyboard has configurable RGB backlighting, and there is ventilation running along the entire front edge of the deck. 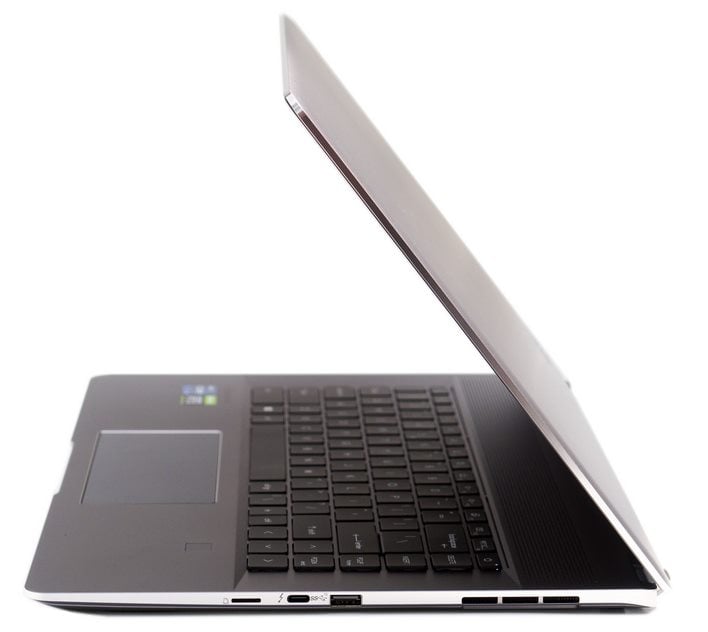 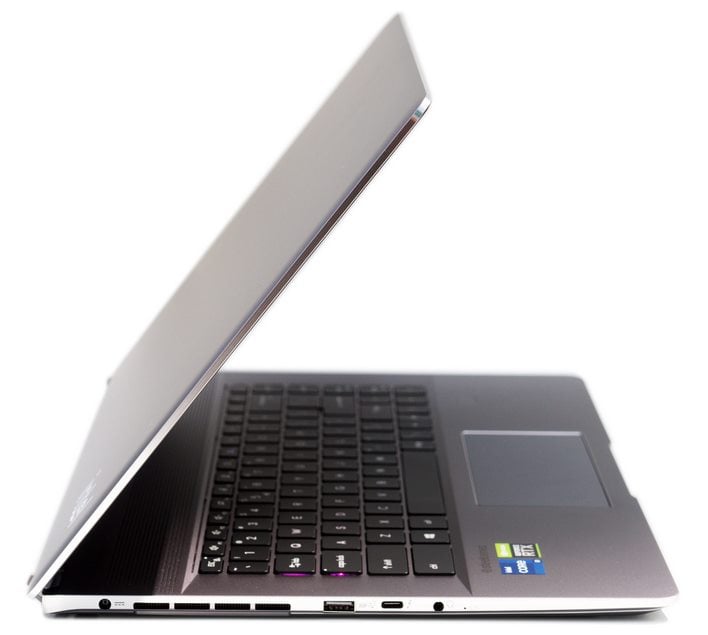 Additional ports, power and ventilation are visible on either side of the system, and everything is encased in a svelte composite chassis, with an alloy lid, and a metallic champagne-like finish all around. We’re sure if you look closely, you’ll get a good idea who built this reference platform for Intel. (Hint: it rhymes with Em Ess Eye.)

We are not going to dwell much on the system, because it is not something you’ll ever be able to buy in this trim. However, we figured you’d all want to get a good look at our test vehicle nonetheless. 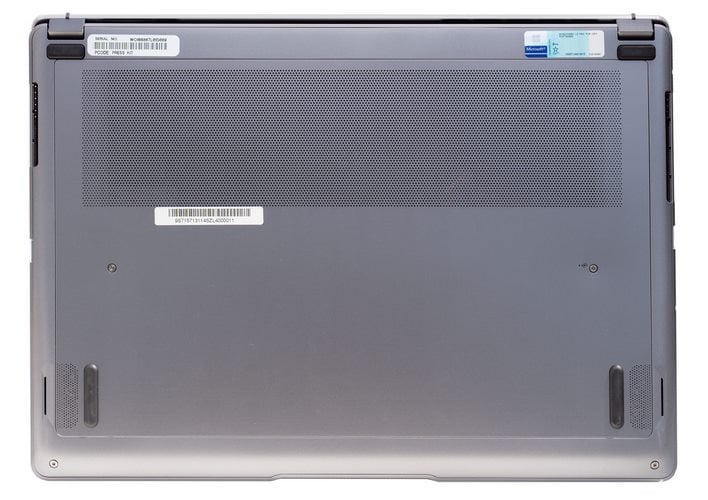 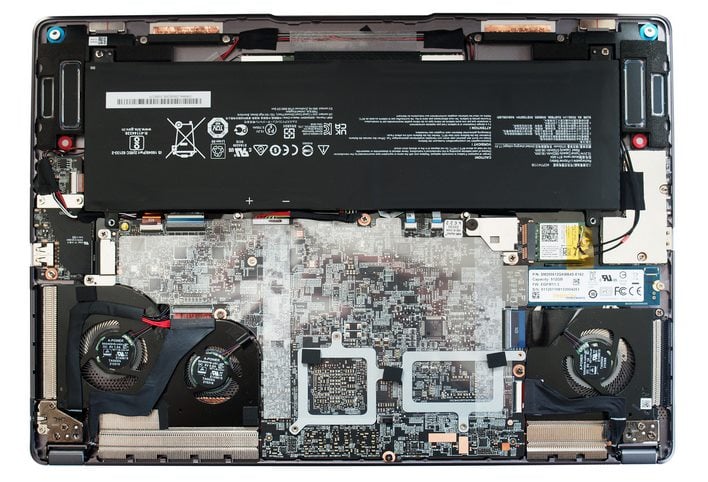 Speaking of getting a good look, we also took a moment to remove the system’s undercarriage to inspect its internals. As you can see, the system is packing triple fans, with a couple of densely-packed heatsinks, that vent air out the back and sides of the system. Although we didn’t rip out the motherboard, the mounting hardware that’s visible on the underside points to the locations of the CPU and GPU, which are linked to the heatsinks via heat pipes.

Speakers flank the battery, and the Killer Wi-Fi NIC and one of the Phison M.2 SSDs are visible on the right. We'll talk more about how all of this hardware behaves a little later, but for now, let's get to some benchmarks and see how this thing performs.

Before running our selection of benchmarks, we applied the latest Windows and driver updates available, but otherwise left the systems untouched with its default, out-of-the-box settings. Our goal is to test the system as it ships, but after auto-updating, to accurately reflect what buyers can expect from a retail experience of a similarly configured machine. For all of these tests, the system was plugged into AC power, utilizing Windows' High Performance power setting. 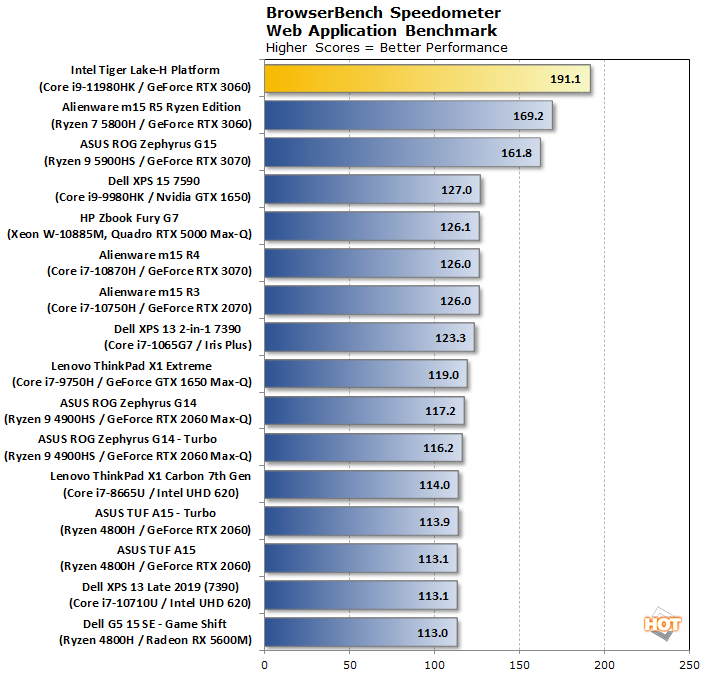 The Core i9-11980HK put up the best scores of the bunch here, outpacing every other notebook we have tested to date. This initial result hints at the processor's excellent single-thread performance.

The previous version of Maxon's rendering benchmark, Cinebench R20, take relatively long to complete, so this is a decent test of a notebook's cooling system. This release also drops the OpenGL test, making Cinebench a pure CPU benchmark this time. We tested both single-threaded and multi-threaded performance here. 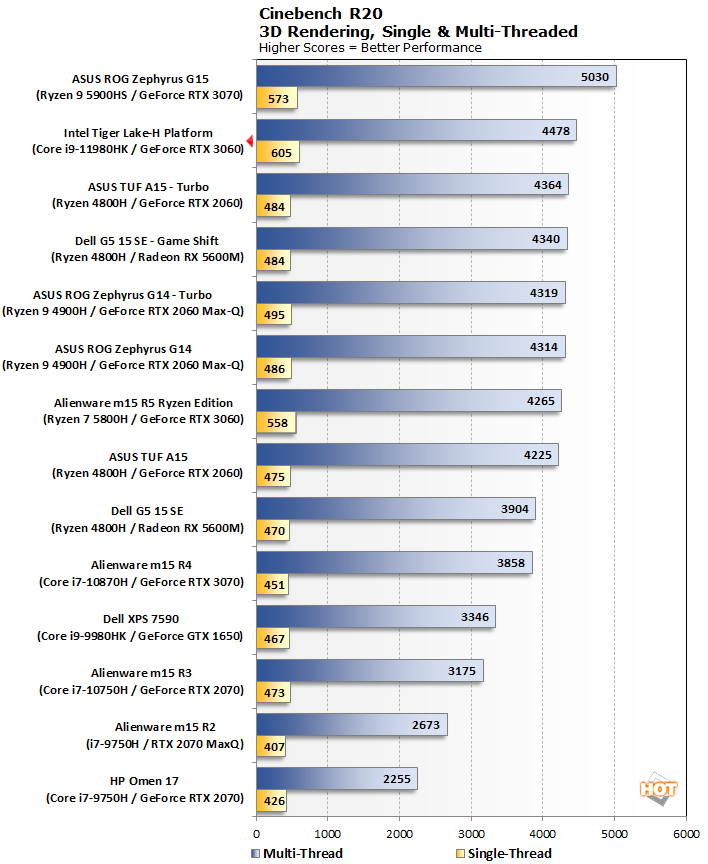 The Tiger Lake-H based Core i9-11980HK couldn't quite catch the the top-end Ryzen 9 5900HS in the ASUS ROG Zephyrus G15 in the Cinebench R20 multi-threaded benchmark, but it does put up the best single-threaded score of the bunch and outruns the lower-power Ryzen 4000 and 5000 8-core / 16-thread processors here.

The newest benchmark from Maxon, Cinebench R23, renders the same scene as R20, but with the company's latest rendering engine with support for all current gen hardware. 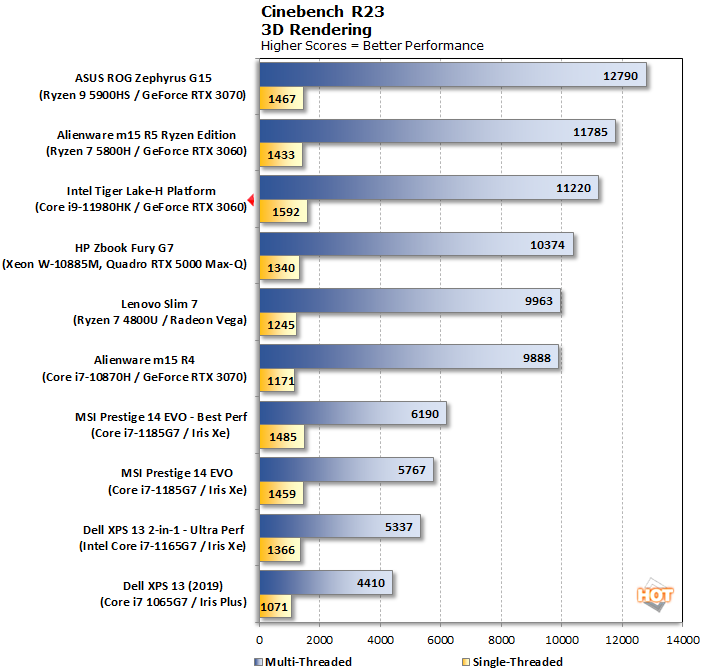 We saw more of the same in Cinebench R23. Here, the Core i9-11980HK once again puts up the best single-threaded score, but in the multi-threaded tests, it can't quite catch the 8-core Ryzen 9 or Ryzen 7 5000 series processors. 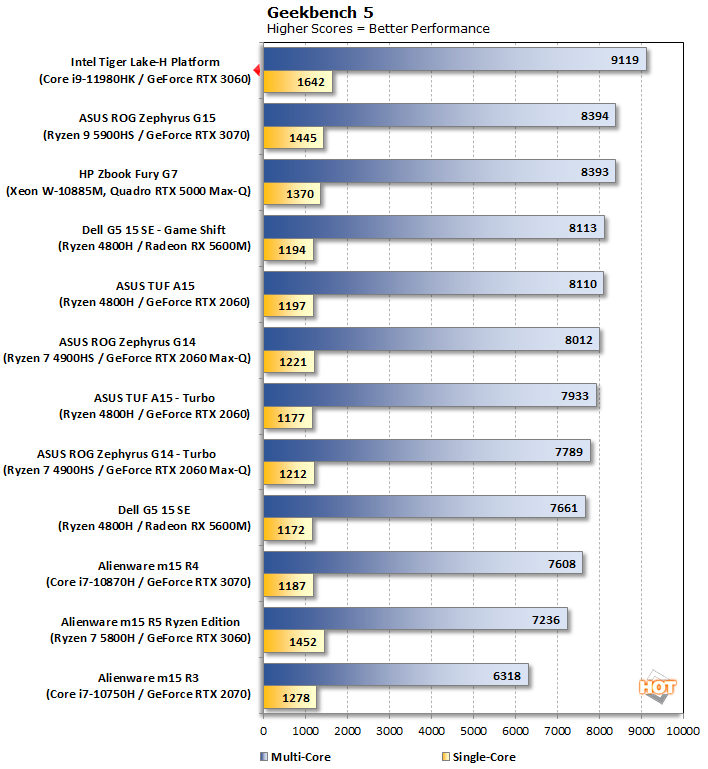 With the latest version of the Geekbench, which runs an array of short, bursty workloads, the Core i9-11980HK leads the pack in both single and multi-threaded performance. 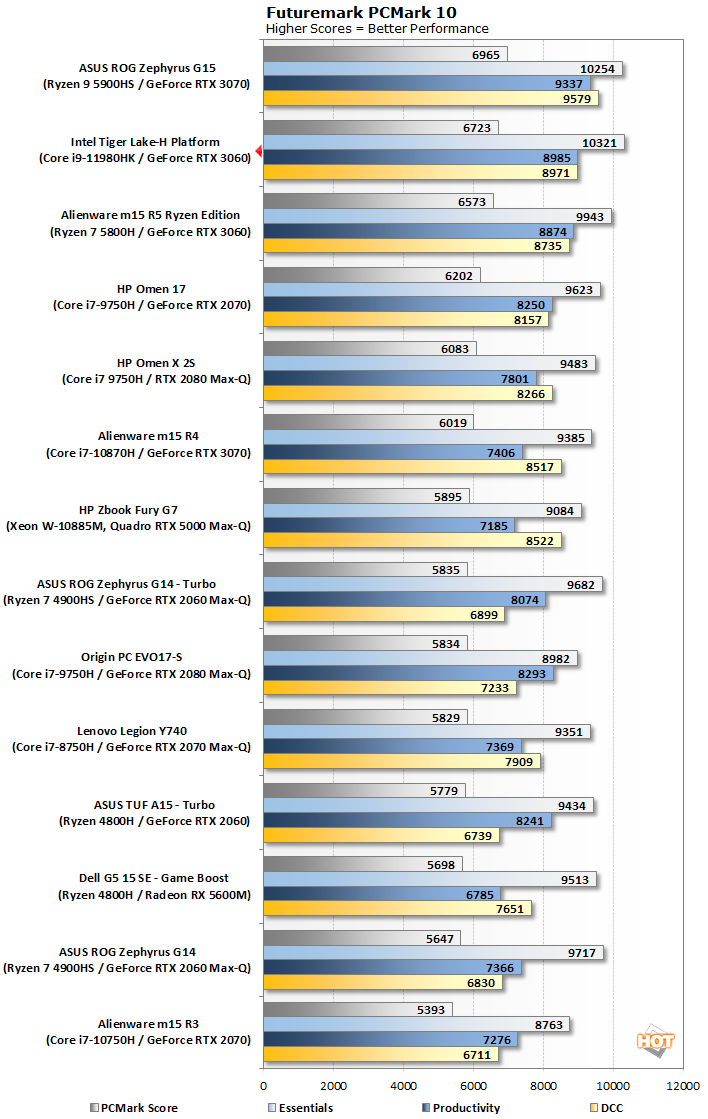 Our PCMark 10 tests slot the Intel Core i9-11980HK-powered laptop in second place (sorted by overall score), but the system actually managed the best "Essentials" result, with highly competitive results in the "Productivity" and "Digital Content Creation" tests as well.
NEXT PAGE