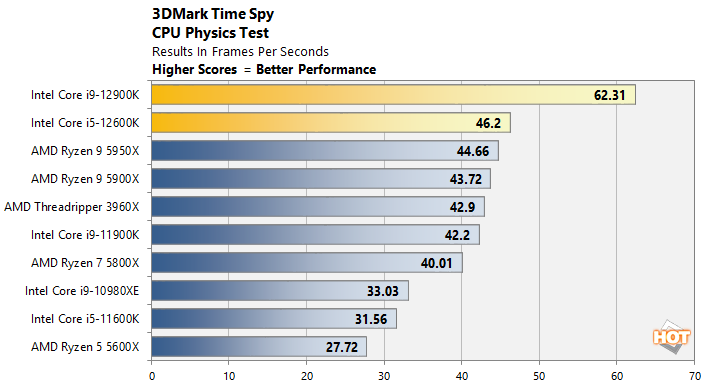 The multi-threaded 3DMark game physics tests ran particularly well on the Alder Lake-based 12th Gen Core processors. The Core i9-12900K and Core i5-12600K finished in first and second place, with the Core i9 significantly outpacing every other CPU we tested. 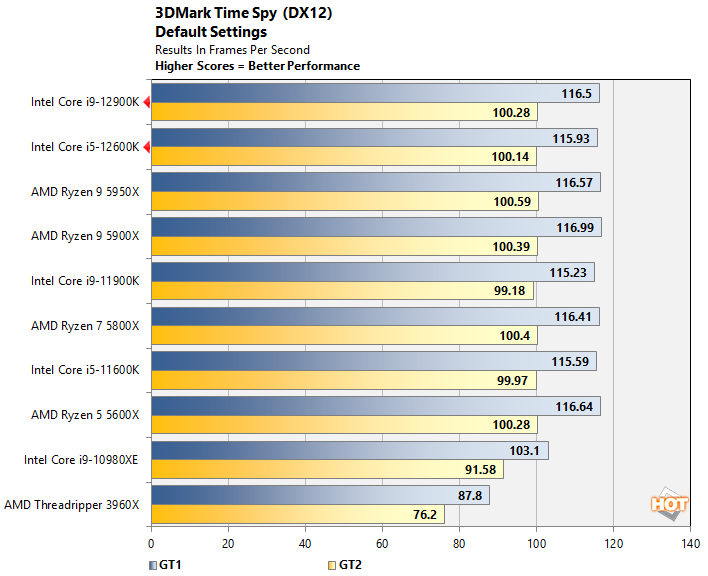 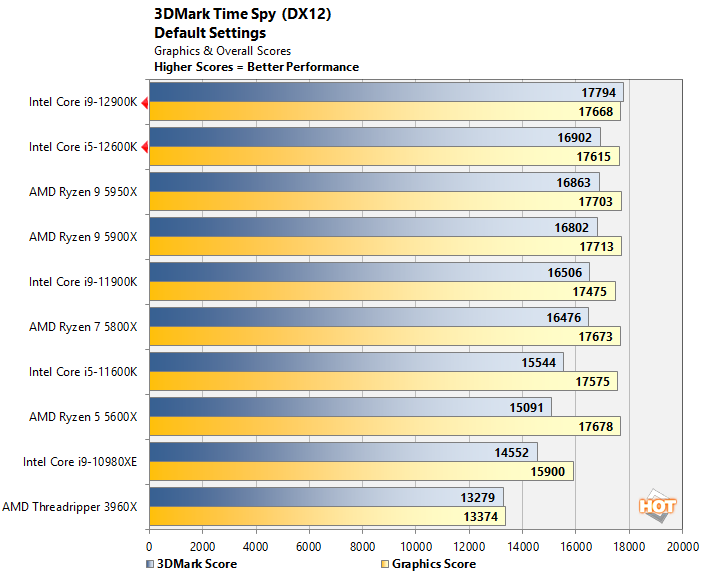 Although the individual game tests have all of the fastest platforms finishing right on top of each other, the 12th Gen Core processors' strong Physics results push them to the head of the pack here in terms of their overall 3DMark scores. Once again, we see the HEDT platforms falling down in Windows 11. 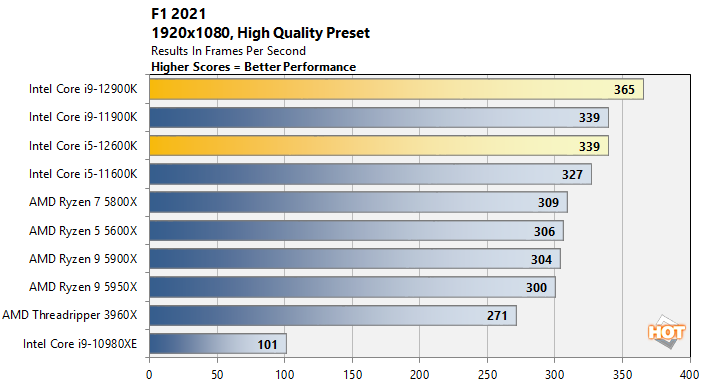 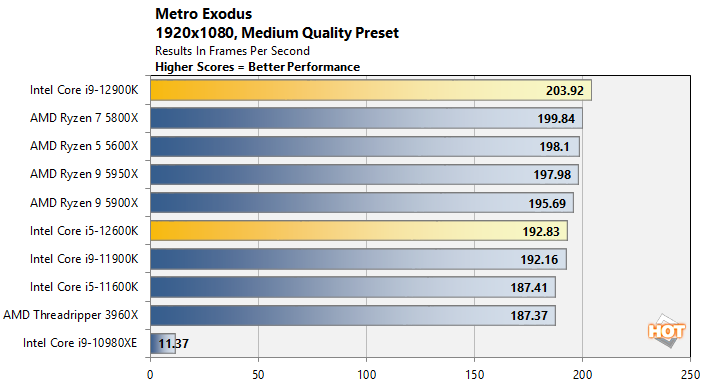 The medium-quality, high-framerate 1080p in-game tests have the Core i9-1290K finishing on top, backing up Intel's claim that this processor is the top-dog for gamers. The Core i5-12600K also performs well, finishing on-par with or just slightly besting the Core i9-11900K. 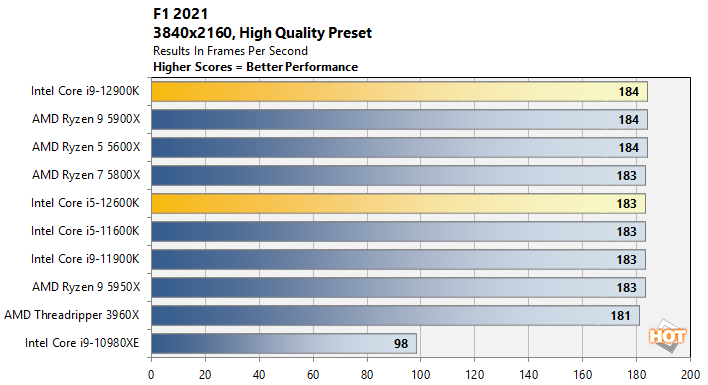 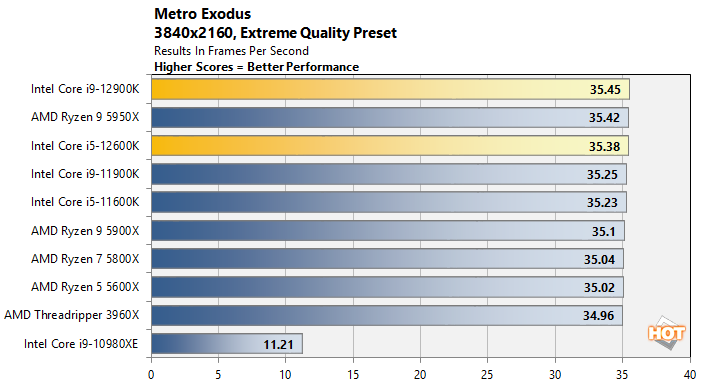 When the in-game details and resolution are cranked up, choking the GPU rather than the CPU, the playing field levels off considerably. Though the 12th Gen Core processors continue to perform well in these tests, the deltas separating all of the top platforms are effectively nil and would be imperceptible in real-world use.

We also ran a couple of tests on the Core i9-12900K using its integrated graphics engine and compared it's performance to a handful of numbers we had available using older Intel solutions and an array of Radeon IGPs. 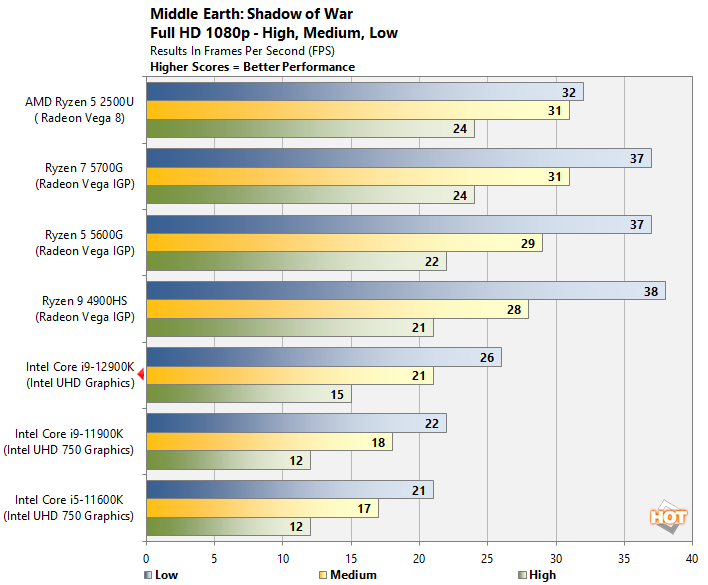 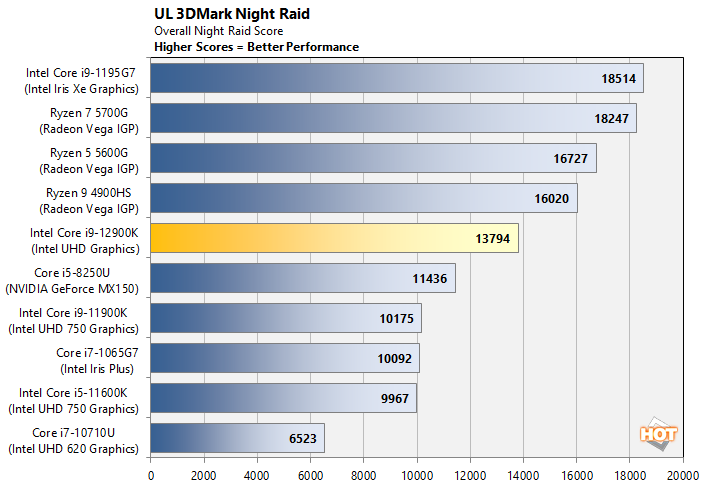 The Intel UHD Graphics in new 12th Gen Core desktop processors is clearly a significant step up over the Intel UHD 750 in 11th Gen Core processors, but even with the increased bandwidth afforded by the platform's DDR5 memory, it can't quite keep pace with AMD's Radeon iGPUs.

This is the point where we'd usually do a bit of overclocking to see what kind of additional performance we could wring from a new platform. Although these chips are unlocked and Intel has incorporated a handful of new overclocking-related features into them, we hit a wall with our particular setup and the Core i9-12900K. We did not have any instability to speak of, but when we made any tweaks the processor's multipliers, under sustained multi-threaded workloads (like Cinebench, for example), core temps would very quickly shoot up to 100°C and the chip would throttle back down to what was effectively its stock performance level.

We are going to experiment further with our test-bed and will update this section with more overclocking related info when we can. We do, however, also want to share some additional information regarding frequencies and temperatures with the processors running in their stock configurations. 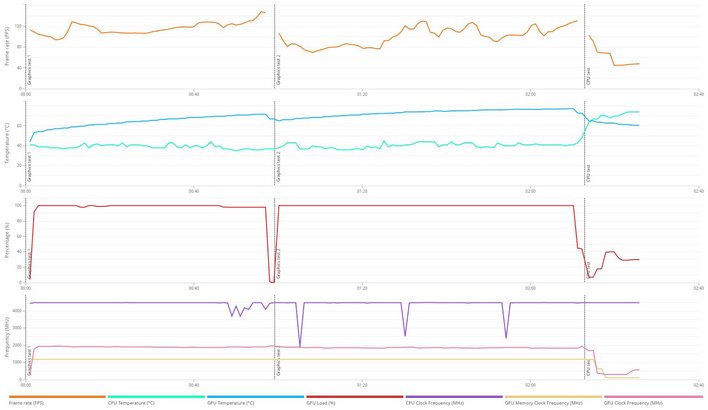 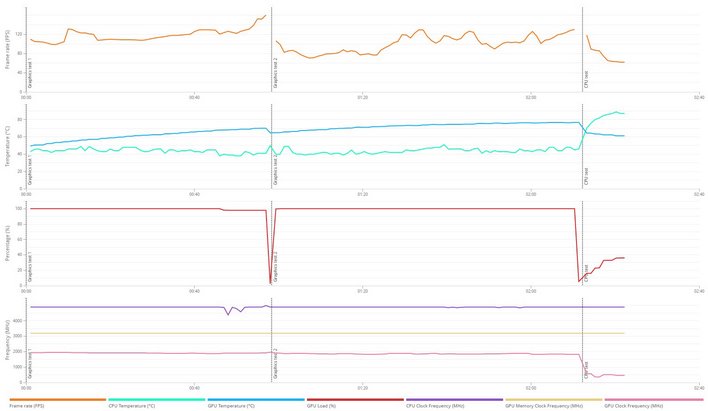 
The two plots above show both the Core i5-12600K's and Core i9-12900K's frequencies and temperatures through an entire 3DMark Time Spy run. If you click to enlarge the images, you'll see that both processors maintained high frequencies for the duration of the run with mild temperatures in the 40°C - 50°C range using a standard off-the-shelf Corsair AIO liquid cooler. 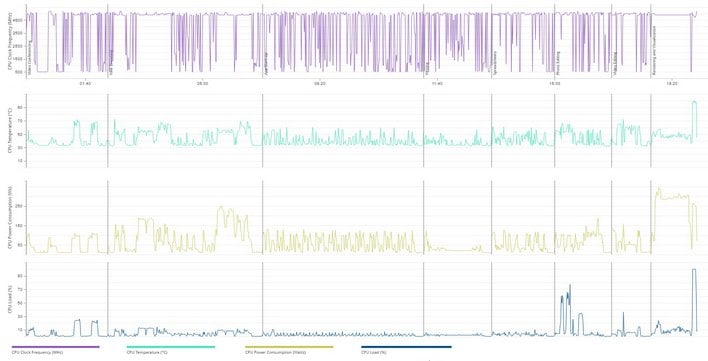 
We have a similar plot for the Core i9-12900K when churning through the various tests in the PCMark 10 suite. Here, for the vast majority of the test, the Core i9-12900K behaved similarly to 3DMark despite the varied productivity and content creation workloads. At the very end, however, during the Rendering & Visualization test, power consumption and temperatures spike upwards, and the chip exceeds the 90°C mark.

The data gathered in PCMark 10 jibes with the hardware monitoring tools built into Intel's XTU utility as well. In its stock configuration, the Core i9-12900K idled in the mid-30°C range (give or take a coupe of degrees across the various cores) and peaked in the upper-90s when running Cinebench.

Throughout all of our benchmarking and testing, we also monitored how much power our Intel 12th Gen-based rig was consuming with a power meter, versus the other systems we used for comparison. 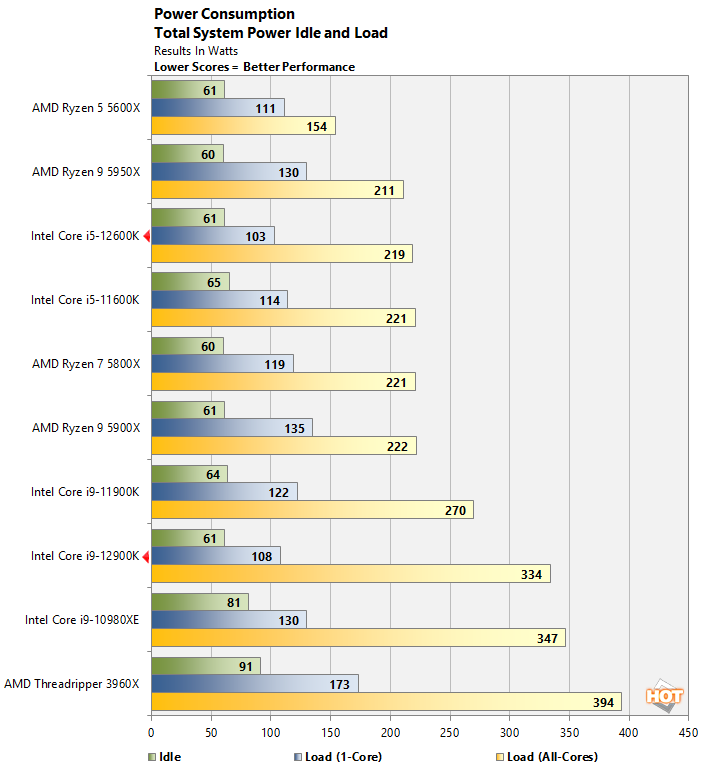 The power consumption stories for the Core i9-12900K and Core i5-12600K are quite different. Relative to the older 11th Gen Core processors, idle and single-core power consumption is improved on the 12th Gen processors, which illustrates a clear per-core efficiency improvement with these new chips. Load power, when all cores are being fully utilized, however, is mixed. The more modest 10-core Core i5-12600K, is downright power friendly relatively to the previous-gen; despite outrunning the older flagship Core i9-11900K more often than not, the 12600K actually uses less power than the more mainstream 11th Gen Core i5-11600K. We can't say the same for the Core i9-12900K, though. While the Core i9-12900K is clearly a class-leading performer in the benchmarks, it does so at the expense of much higher load power. The Core i9-12900K burned 60 more watts than the Core i9-11900K, despite the former's newer hybrid architecture and the more advanced Intel 7 process node used to manufacture the chips.
PREV PAGE NEXT PAGE