When configuring our test systems for this article, we first made sure all firmwares were up to date, then we entered each system's respective BIOS / UEFI and set each board to its "Optimized" or "High performance" defaults. We then saved the settings, re-entered the BIOS and set the memory frequency to the maximum officially supported speed for the given platform (without overclocking). The SSDs were then formatted, and Windows 11 Pro was installed and fully updated. 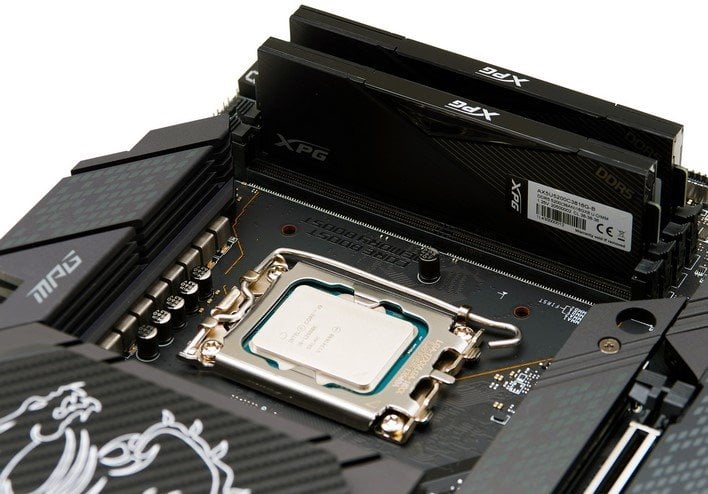 We began our testing with the latest version of SiSoftware's SANDRA 2021, the System ANalyzer, Diagnostic and Reporting Assistant. We ran twoof the built-in sub-system tests that partially comprise the suite with the Core i9-12900K and Core i5-12600K (CPU Arithmetic and Multimedia). All of the scores reported below were taken with the CPUs running at their default settings, with 32GB of DDR5 RAM running at an effective 4,800MHz, in dual-channel mode, on the MSI MPG Z690 Carbon Wi-Fi motherboard. 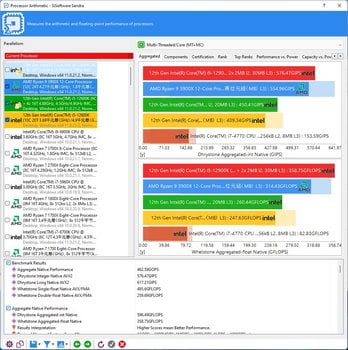 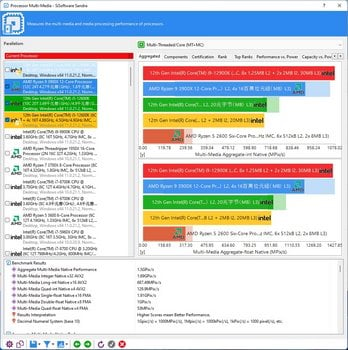 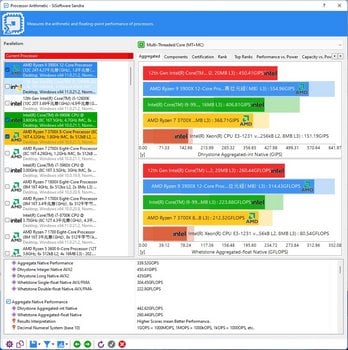 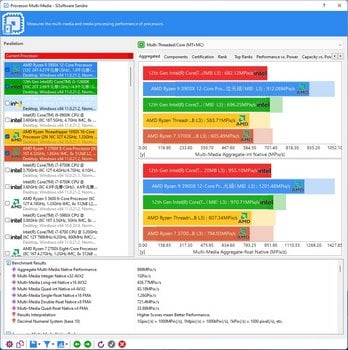 SANDRA's CPU Arithmetic benchmark shows Core i5-12600K hitting an aggregate score of 339.52GOPS, whereas the flagship Core i9-12900K broke the 462GOPS mark. Aggregate performance in the Multimedia test put the Core i5-12600K at 989MPix/s and the Core i9-12900K at over 1.5GPix/s. Normally we'd also include memory bandwidth and cache + memory latency information here as well, but the version of SANDRA we used wasn't cooperating with our 12th Gen processors in those tests. We were, however, also running AIDA64's CPU Cache and Memory benchmark and have some data to share... 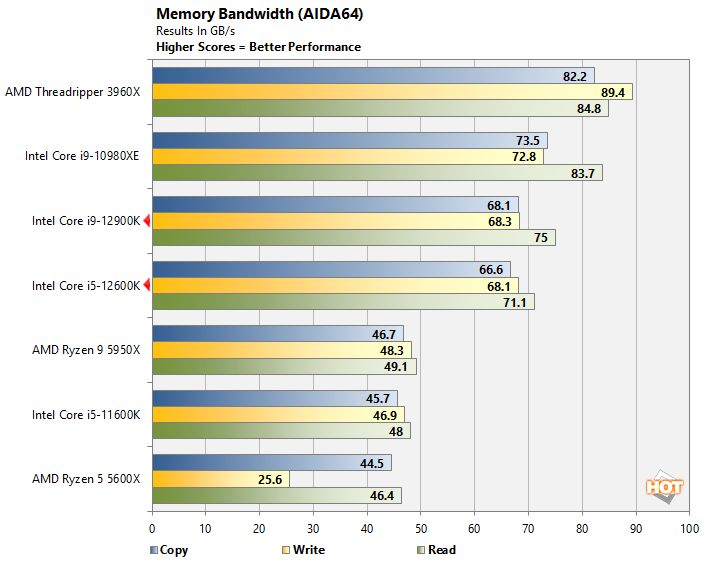 In terms of memory bandwidth, the 12th Gen Core processors fall within the 66GB/s - 75GB/s range, when paired to DDR5-4800 CL38 memory in dual channel mode (bandwidth will be higher with faster memory). That puts memory bandwidth way above previous-gen mainstream platforms, but a notch behind the HEDT platforms that leverage quad channel memory configurations. 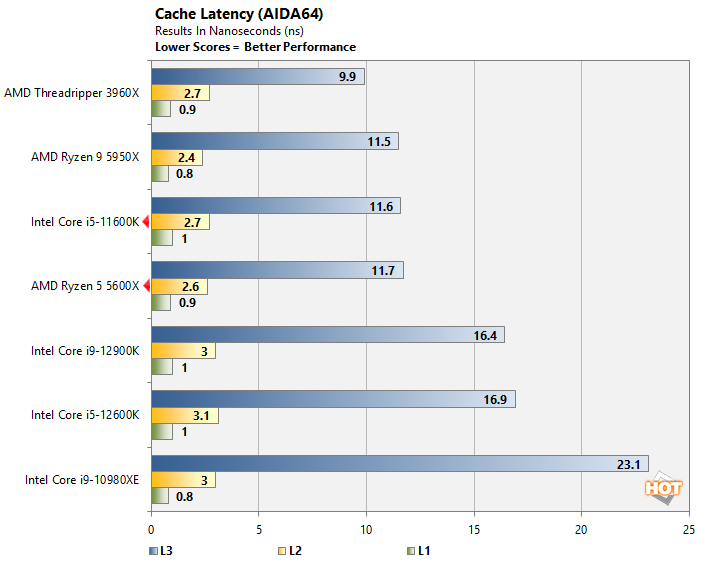 Cache latencies on the 12th Gen Core processors are also higher than 11th Gen products, but keep in mind 12th Gen processors have more cache all around. That means accessing the cache may take slightly longer, but there in an increased likelihood of a cache hit, since ultimately more data is held closer to the CPU cores. 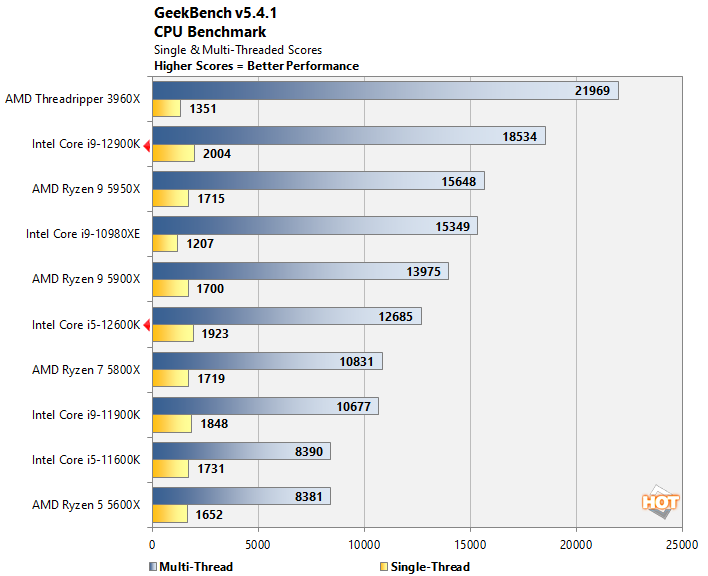 With our first set of comparisons in Geekbench, the new 12th Gen Core processors look great. The Core i9-12900K puts up the best single-thread score by far followed by the Core i5-12600K. The Core i9-12900K also puts up the best multi-threaded score of all the mainstream processors, besting even the Ryzen 9 5950X -- only the 24-Core HEDT Threadripper 3960X is faster in the multi-threaded test. 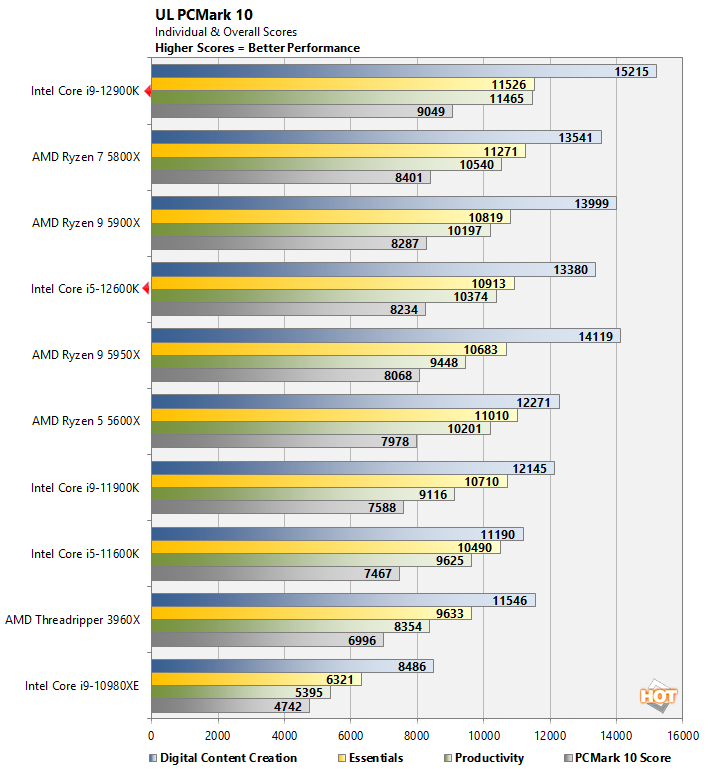 The new 12th Gen Core processors also put up strong scores in PCMark 10. Here, the Core i9-12900K takes the pole position, besting every other platform we tested. The Core i5-12600K can't muster a content creation score quite as high with its lower core count and clocks, but it still manages to land in 4th place, sandwiched between the Ryzen 9 5900X and 5950X. 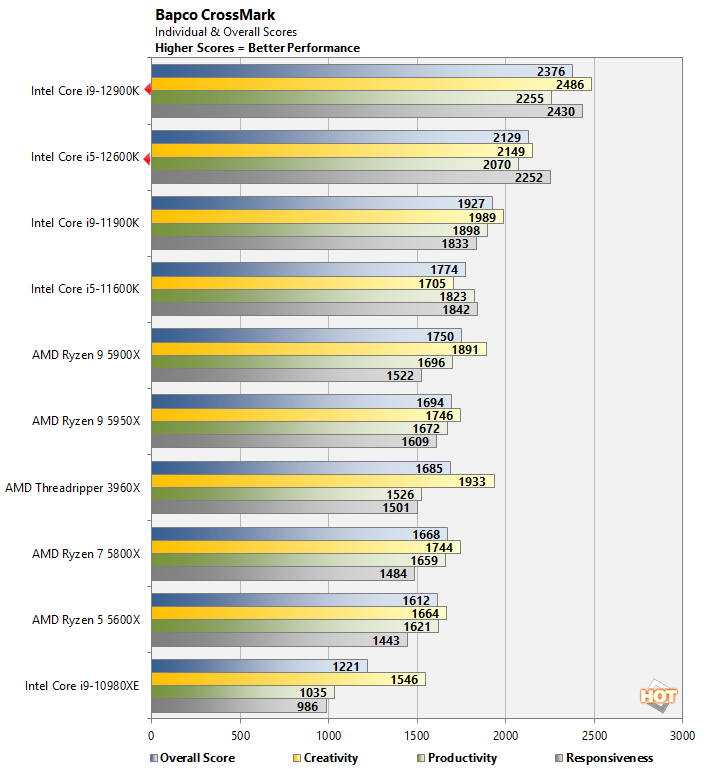 The new 12th Gen Core processors take first and second place, outclassing all of the other platforms we tested by far. The Core i9-12900K and Core i5-12600K both put up strong scores across the board in Crossmark, which may seem skewed until you see how these processors perform in some browser-based tests... 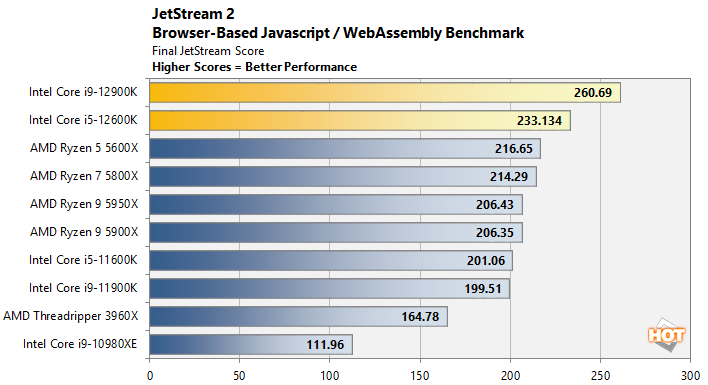 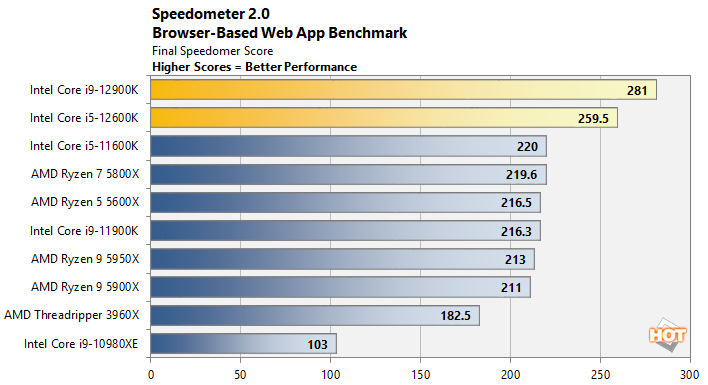 The Core i9-12900K and Core i5-12600K absolutely crushed every other platform in both Jetstream and Speedometer. Of course, all of these platforms are plenty fast for browsing and web apps (though the HEDT platforms completely fall down on Windows 11 -- at least for now), but the performance of these 12th Gen processors with lightly threaded workloads is clearly top-notch. 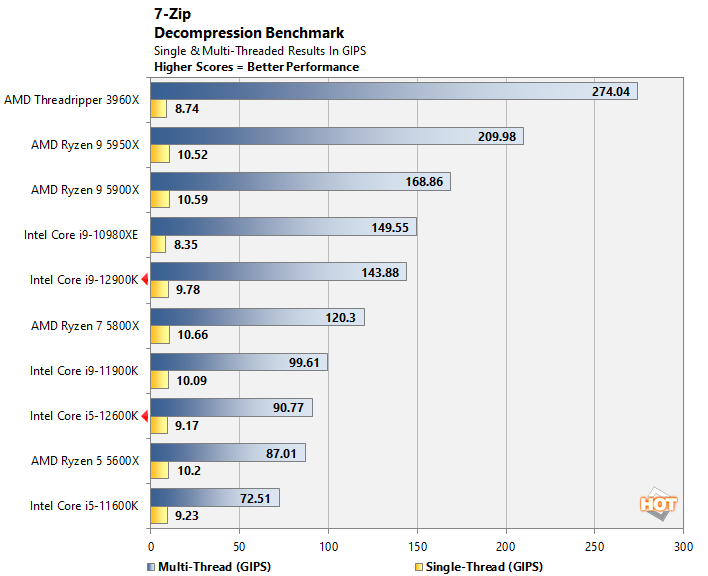 The Core i9-12900K and Core i5-12600K don't shine quite as bright in 7-Zips decompression tests. They clearly outpace the older 11th Gen processors, but trail Ryzen in both the single and multi-threaded tests.
PREV PAGE NEXT PAGE