In our custom LAME XP MP3 encoding test, we convert 16, large uncompressed WAV files to the MP3 format, which is a popular use case for many end users, to provide portability and storage of their digital audio content. The LAME engine is an open-source MP3 audio encoder that is used widely in a multitude of third party applications.

In this test, we created 16-copies of our own 223MB WAV file (an 11 minute Grateful Dead jam) and converted it to the MP3 format using the multi-thread capable LAME XP tool. Processing times are recorded below, listed in minutes:seconds. Shorter times equate to better performance. 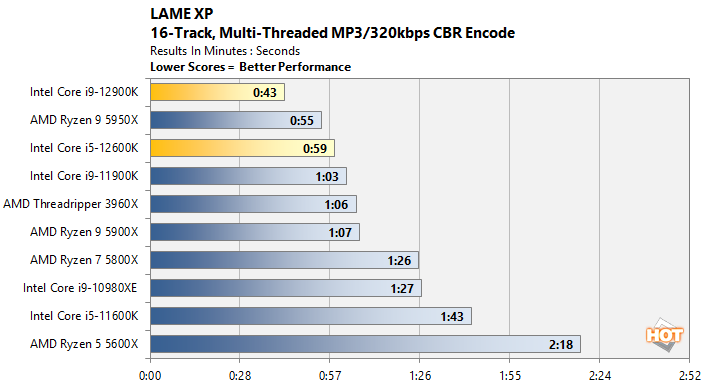 The multi-threaded HWBOT x265 Benchmark is based on the open source x265 encoder that leverages modern CPU instructions to speed video encoding. We tested the CPUs represented here with the 64-bit encoder using the default 1080p and 4K workloads. 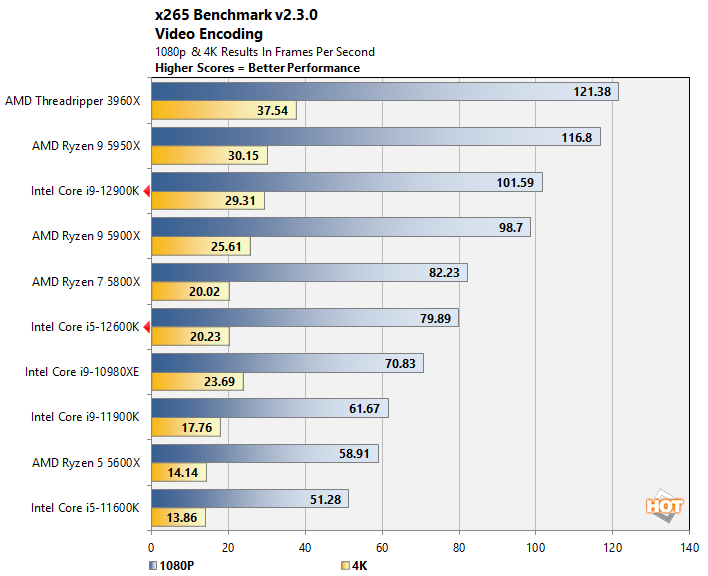 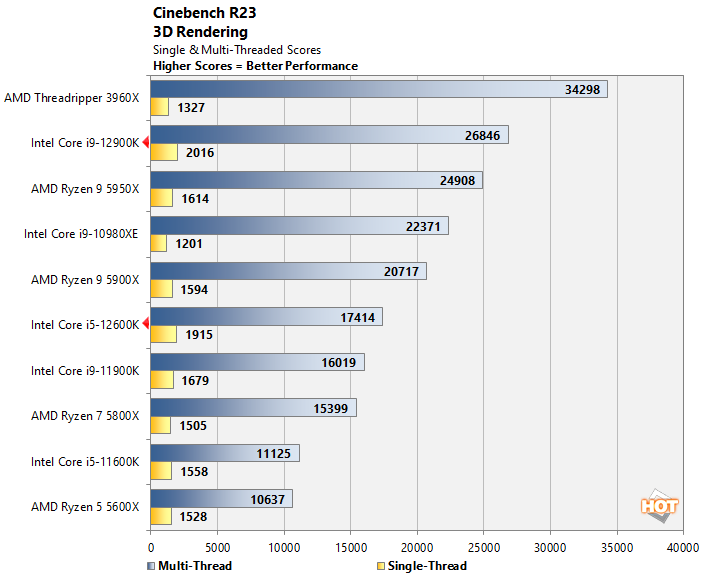 Here's one you probably weren't expecting considering AMD's dominant performance over the last few years. In Cinebench R23, the Core i9-12900K outpaces all of the Ryzen 5000 series processors in the multi-threaded test, including the 16-core / 32-thread 5950X and it puts up the best single-threaded score by far. The Core i5-12600K also performs well, outrunning the Core i9-11900K and the higher-priced Ryzen 7 5800X. 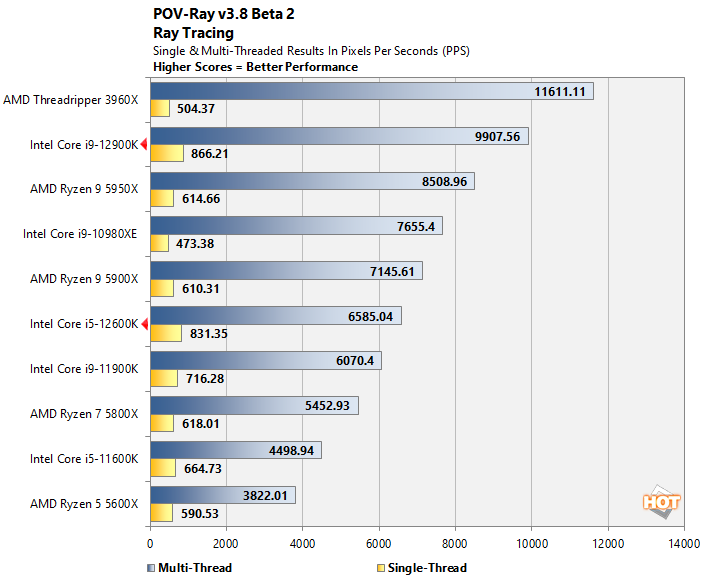 The overall performance trend in POV-Ray mimics Cinebench. Here, we also see the Core i9-12900K outpacing all of the mainstream processors in both the single and multi-threaded tests -- it's only the 24-core Threadripper that finishes out in front. The Core i5-12600K also continues to impress, with its excellent single-thread result and multi-threaded result that lands between the Ryzen 9 5900X and Core i9-11900K.

Blender is a free and open source 3D creation suite that can handle everything from modeling, rigging, animation, simulation, rendering, compositing and motion tracking. It has a purpose-built benchmarking tool that will track the time it takes to complete rendering a particular model (or models). We used the CPU-focused bmw27 and fishy_cat models for these tests... 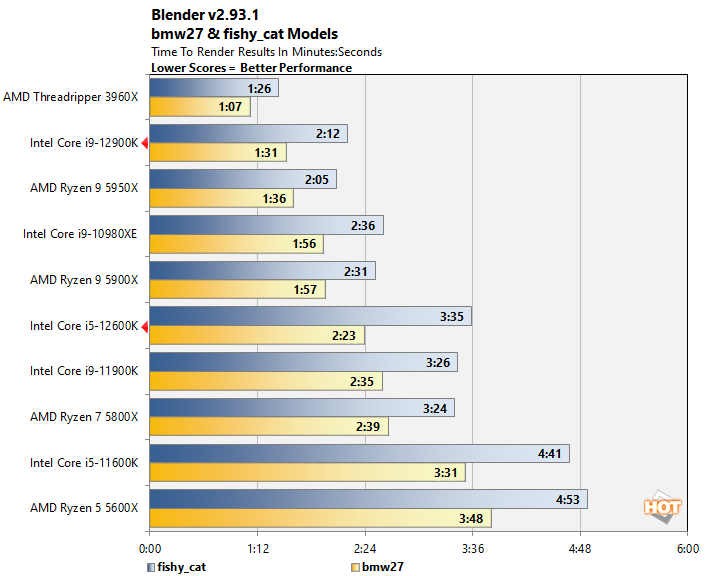 The Core i9-12900K's and Core i5-12600K's results are somewhat mixed in the Blender benchmark. When rendering the bmw27 model, Intel's newest chips perform exceptionally well, finishing in the same positions as they did in the POV-Ray and Cinebech tests. With the fishy_cat model, however, the 12th Gen processors drop down a couple of rungs, and end up trailing the Ryzen 9 5950X or Ryzen 7 5800X. 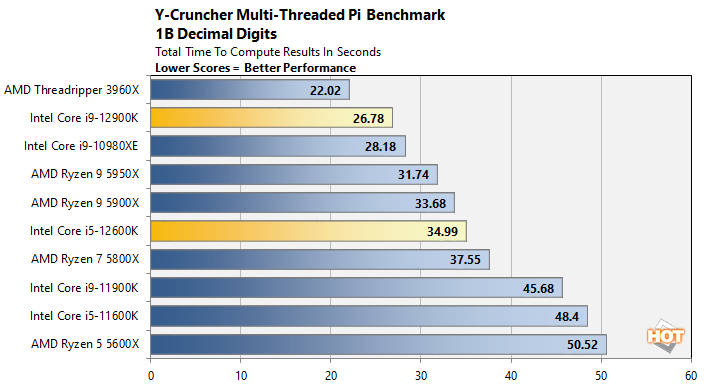 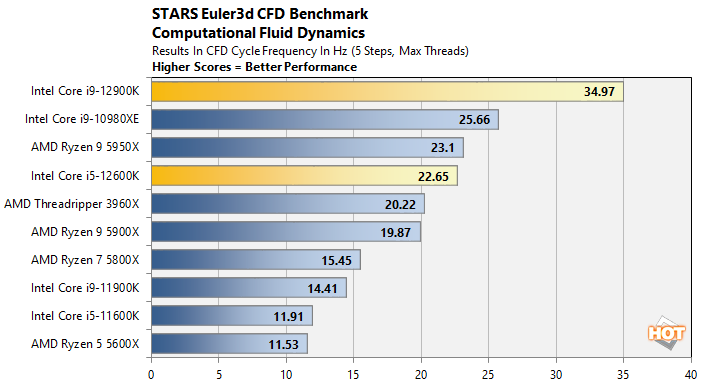 Their massive memory bandwidth, larger caches, and high-performing P-cores push the 12th Gen chips up the ladder in this benchmark as well. The Core i9-12900K lands in the pole position, ahead of every other platform we tested, and only the Intel HEDT Core i9-10980XE and Ryzen 9 5950X are able to outpace the Core i5-12600K.
PREV PAGE NEXT PAGE