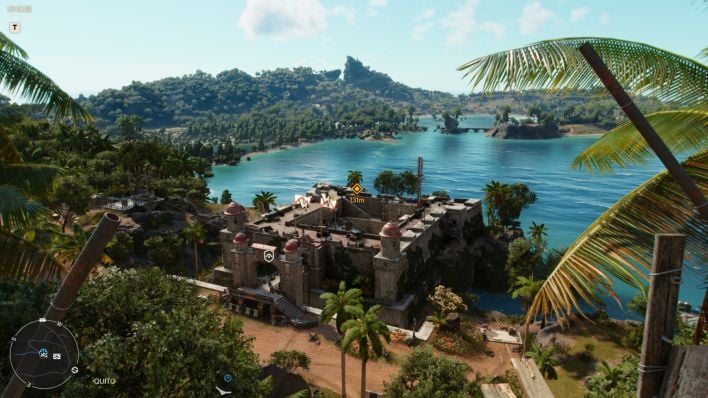 
A whole new crop of blockbuster games are lining up for a big holiday shopping season. Ubisoft didn't really intend for that to be the case for Far Cry 6, but early this year the COVID-19 pandemic had other plans. The game had been hit by some delays, but at the end of May the company set a date: October 7, 2021. Finally, the latest Far Cry title has arrived and the open-world first-person shooter is ready for players to take down its repressive government and maybe learn a little something along the way.


Far Cry 6 Is A Political Statement

What responsibility do games, or game developers, have to address the state of today's world? The Caribbean islands are at once both a beautiful paradise and home to some of the worst human-on-human violence in modern history. From its first loading screen, Far Cry 6 warns players that it will contain topics that might cause a bad reaction in some players. Fascist dictators, human trafficking, and violence against children are just some of what you'll find on the fictional island paradise nation of Yara, an obvious and haunting facsimile of Cuba.

You are Dani Rojas, a former Yaran military officer and current guerilla freedom fighter, attempting to overthrow the repressive government and bring peace and tranquility to your home. Anton Castillo, known as "El Presidente", is teaching his son Diego how to follow in his footsteps as a totalitarian dictator over the island nation. Voiced by Giancarlo Esposito (probably best known as my favorite character on Breaking Bad, Gus Fring), Castillo wants nothing to do with the outside world. He believes that Yara can survive on its own without other countries influencing its people and he rules with an iron fist.

Ubisoft is pulling no punches with its intent to make Far Cry 6 a political statement as much as it is a game. Narrative Director Navid Khavari has gone on the record saying so in a post on Ubisoft's own blog, so the company appears to stand behind it. However, Khavari says that it's not just about Cuba, and the team took a look at guerilla revolution from the 1950s on forward. He says that the writers worked to make sure that the narrative is told with sensitivity, but also that the plot does ask hard questions.


Sure, other games tackle real-life issues, but not in the same way. In a realistic military shooter like Call of Duty, players are some sort of hero military officer, playing to protect some unseen group or punish someone for off-screen atrocity. Far Cry 6 is just different from the very start in a way that tugs at your heartstrings and, honestly, can be kind of emotionally draining. That's not to say the game is all heavy downers, though; there's plenty of humor throughout, often provided by one of the first characters you meet, Juan Cortez, and his pet alligator (crocodile?) Guapo. Guapo likes Dani, fortunately.

Because of the sensitive nature of the plot, and just because we despise spoilers, we won't be discussing the plot of the game any further. Players should be prepared for heavy topics. While many games are an escape from reality, the last couple of Far Cry games have been just the opposite. Fans of the series already know that, but we wanted to prepare newcomers for the setting and themes before diving in.

Far Cry has been using Ubisoft's Dunia Engine 2 since Far Cry 3, but the company has added in new features that keep the graphics fresh and performance high. This time around, Far Cry 6 has two of the gaming industry's biggest buzzwords, which happen to go hand-in-hand: support for hardware-assisted ray tracing and AMD's FidelityFX Super Resolution. FSR works on just about any graphics card from the last four or five years, and ray tracing hardware has been available since late 2018, so despite an ongoing chip shortage, plenty of PC gamers should be able to enjoy these enhancements.

Ray tracing has been pretty hardware-intensive since it launched, something that was evident when we toggled settings in Remedy and 505 Games' Control. Far Cry 6 has support for ray traced shadows and reflections, and those two features can be enabled independently in the settings. They're also PC exclusives, as the console versions of the game won't have any ray tracing on PlayStation 5 or Xbox Series X|S. 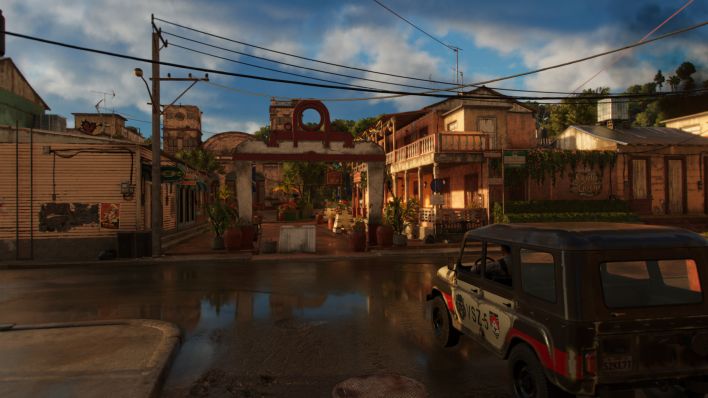 
In this example, the reflections show a subtle difference: in the example with ray tracing off, the entire building to the right of the archway is missing once we get past the arch. It's not until we turn on ray tracing that the columns that hold up the balcony appear, and then you just can't un-see it. The ray traced reflections show off a detail that's easy to miss but impossible to forget once it's gone. Shadows work in a very similar fashion.


Ignore Guapo, the enormous reptile wearing a t-shirt, for a moment and focus on the shadows. In the example without ray tracing the shadows look pretty good. That is, however, until we look at the game with ray tracing on. The character in the middle is a great example of shadows being softened by ray tracing. Rather than hard edges that outline his body perfectly, they're more amorphous and roll with the terrain much more than before. Also look at the tent cloth in the top-left, which casts a very dark shadow without ray tracing, but lets some light through when ray tracing is enabled.

Meanwhile, FSR takes a lower resolution image -- one that's easier for a graphics card to generate with all the ray tracing goodness -- and upscales it to bring back some of the detail that might be lost. There are four different settings that trade render target resolution for performance, and particularly at the highest settings it's very hard to distinguish from the native resolution. The temptation is strong to pause and stare at an image to see what detail is lost, also true of NVIDIA's Deep Learning Super Sampling (DLSS) 2.0, but in motion we've found that it's very convincing.

We're really only looking at the same scene with FidelityFX Super Resolution disabled, in Quality mode, and in Performance mode. We're skipping out on Ultra Quality and Balanced because the shift is fairly subtle when moving just one "step" down the ladder. If you recall, AMD made the resolution scale with the same ratios as NVIDIA did with DLSS 2.0, so DLSS Quality and FSR Quality have the same input resolution of 1970 x 1108 when targeting an upscaled resolution of 2560 x 1440.

If you really want to zoom in to those example images, you can tease out differences between native (FSR off) and Quality, but the difference is not all that large in our estimation. Once we throw movement into the mix it's, like we said, pretty great. On the other hand, by the time we make it down to Performance mode we're rendering at 1280 x 720 and there's only so much detail that FSR can put back. Unlike DLSS, FSR doesn't have the Ultra Performance mode, but it does have the Ultra Quality mode for games that need just a little boost.

Before we dive into performance, we need to look at the system requirements. Ubisoft published some very lightweight system requirements, which reach back to the first-generation Zen-based Ryzen 3 1200 and 2013's Haswell generation with the Core i5-4460 on the low end. The graphics cards are similarly light, reaching back to graphics cards from 2016 or so. Even if your PC is a lightweight, it should be able to handle Far Cry 6 without much issue. 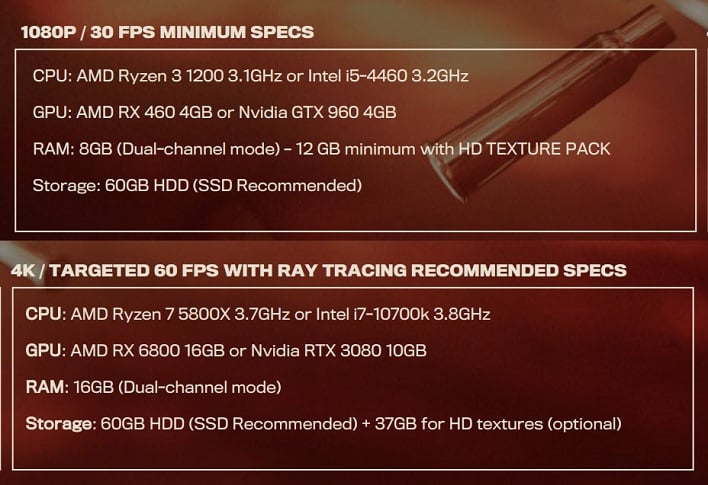 Just like every other recent title in the series, Far Cry 6 has a built-in benchmark that makes it easy to gauge performance. We took a beefy enthusiast PC and swapped out several graphics cards to see how the game runs on each. Ubisoft warned us that the game is pretty CPU limited on the fastest graphics cards, and our results seem to bear this out. Let's take a look at our test configuration. 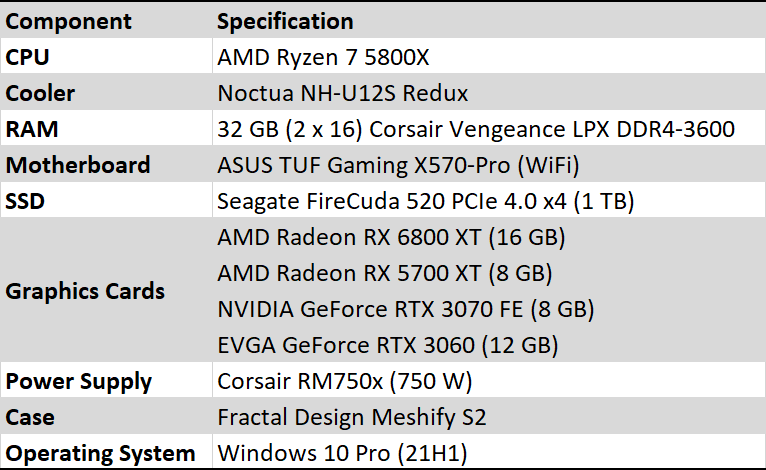 The Ryzen 7 5800X is pretty beefy so we feel like we'll be getting the most out of our graphics cards, at least most of the time. Using four graphics cards -- two Radeons and two GeForces -- across multiple resolutions, DXR toggles, and FSR settings should give us a good idea how the game runs on most modern graphics cards. And of course we used the latest drivers on both cards: AMD's Adrenaline 21.10.1 and the latest NVIDIA Game-Ready 472.12 driver.