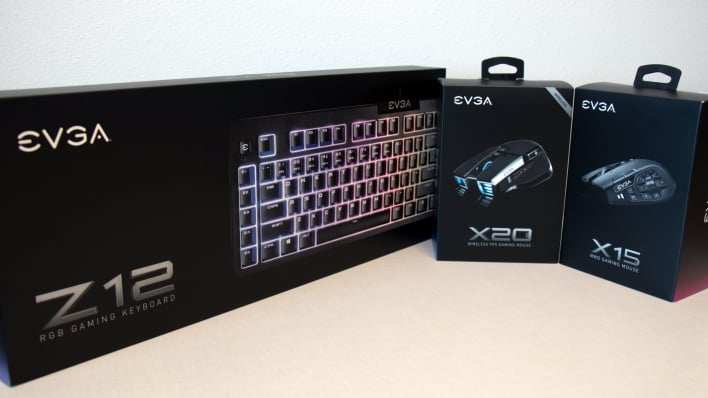 As enthusiasts, we're often most enamored by the latest and greatest graphics cards, processors, and storage technology in our endeavors to squeeze as much performance from our systems as possible. However, it is the human interface devices -- like our keyboards, mice, and monitors -- that can have the most significant impact on our user experience. A high-quality keyboard and mouse, for example, can make you more productive, reduce fatigue, and even improve your gaming chops. So, when EVGA offered up their upcoming X20 and X15 gaming mice and Z12 RGB keyboard, we were eager to take a look.

After daily driving the peripherals for over a week, it is safe to say that EVGA's latest offerings are reasonably priced options that bring plenty to the table, or rather, to your desk. Let's take a look... 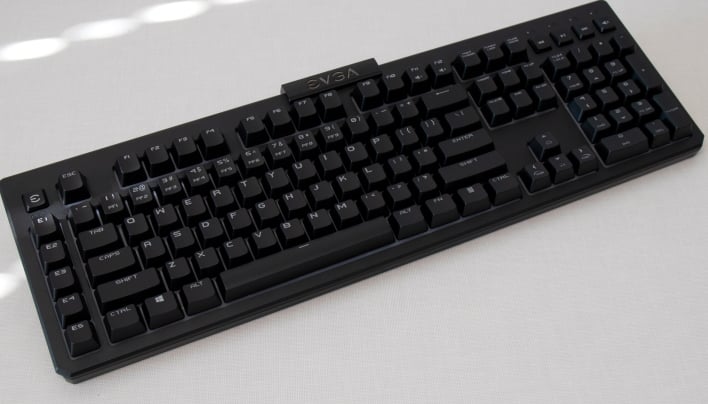 For the mechanical keyboard enthusiasts among us, it may be difficult to get excited over about a membrane keyboard like the EVGA Z12. We'd caution you to not be so quick to pass judgment though, as you might be surprised by how well this keyboard performs. We certainly were when we switched over from Cherry MX switches to EVGA’s membrane switches, but before we get to the specifics, let’s take a tour of the board and examine its overall design. 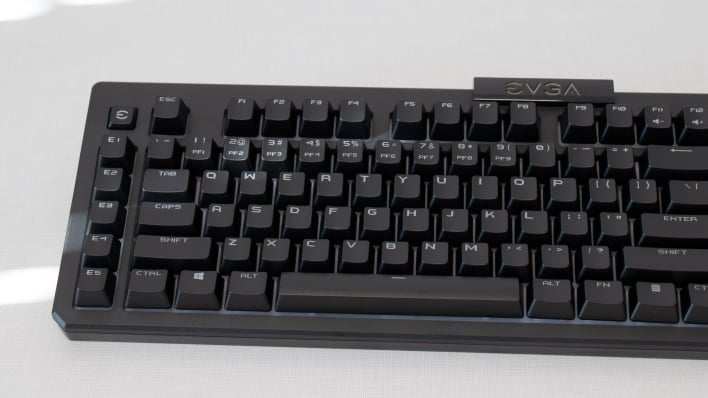 The EVGA Z12 offers IP32 Spill-Resistance and has a composite plastic body, with a matte black finish throughout. Although the Z12 targets gamers, its design isn't particularly over-the-top and would fit nicely with any PC gaming or office setup.

Starting at the top, you can see the prominent EVGA logo sitting on a rectangular pedestal, which sadly does not light up, but still looks good nonetheless. Then, shifting over to the left-hand side, you’ll note five programmable keys and an EVGA “E” button, which toggles between standard and gaming modes, the latter of which disables the Windows key and other key combinations that may cause you to be accidentally booted from games. Moving across the board to the right, you have the standard gamut of buttons, along with some additional features, like the dedicated media keys above the numpad. 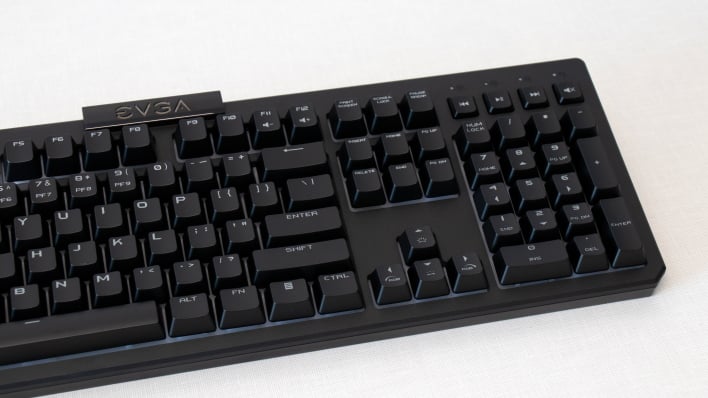 The arrow keys feature RGB pattern and brightness controls when pressed in conjunction with the function key, so you can customize the Z12's five RGB color zones on the fly. However, you can also use the EVGA Unleash RGB application we'll show you a little later to fine-tune the keyboard in numerous ways. Moving up from there, there are also the four aforementioned media keys above the number pad, so you can control content on the fly. 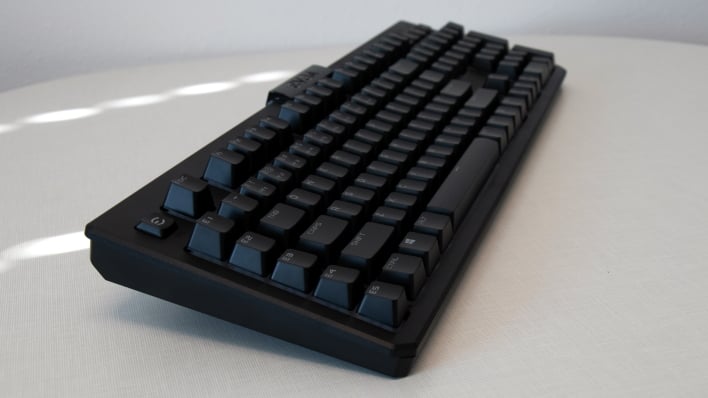 The membrane switches on the EVGA Z12 are rated for 20 million keypresses, which is in-line with some mechanical switches. They have a debounce rate of 20ms, with an actuation distance of 1.5mm, a total travel distance of 3.0mm, and an actuation force of 45g.

As we've mentioned, we've been using the Z12 as a daily driver for about a week now, and the typing experience is surprisingly good for a relatively budget-friendly option. With the rear kickstands in position, the keyboard sits at a comfortable angle, and the tactile response from the keys is good -- not quite on the level of a Topre membrane board, but clearly better than many bargain basement options. The only thing missing is a wrist rest, but we're told there will be a matching, magnetic option sold separately in the future. 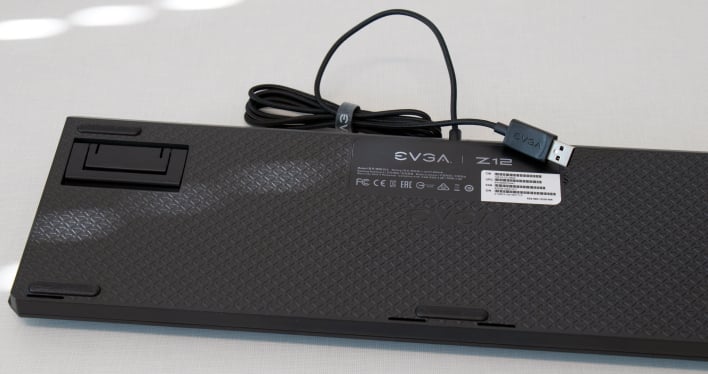 We found that it does not take much effort to push through each key’s 3mm travel distance and bottom out the keys, considering the 45 grams of actuation force, which is similar to Cherry MX Brown switches. Furthermore, we found that when you start pushing through the full key travel distance, the motion isn't as smooth and consistent as a high-quality mechanical board, but that's par for the course with membrane switches. 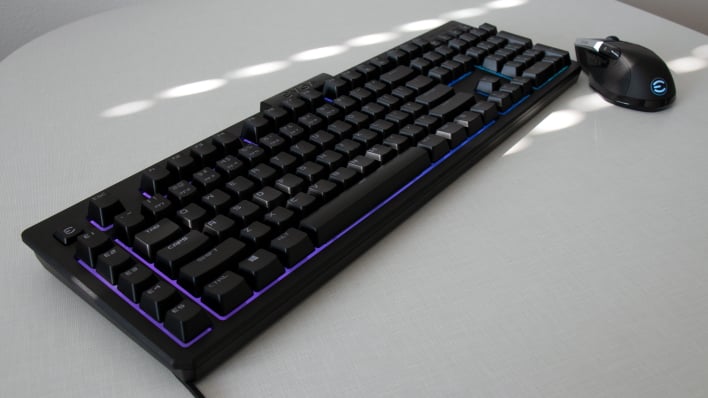 If the EVGA Z12's features are appealing to you, the keyboard has an MSRP of $49.99, but there's a limited-time introductory price of only $24.99, which is a steal. 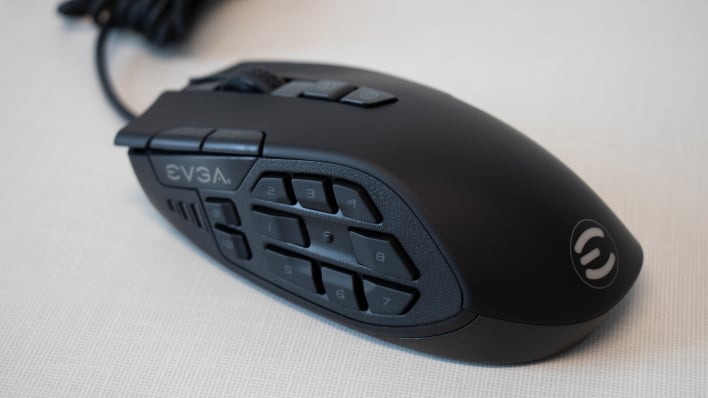 The next item EVGA sent over is the X15, which is an “MMO gaming mouse” offering “a multipurpose MMO Panel, equipped with 12 physical-mechanical buttons and an ergonomic design for Palm grips, providing excellent click and hand feel.” Like the X12 keyboard, the X15 mouse has a matte black finish with RGB accents that looks quite nice. This finish, though, has an interestingly smooth feel on the left and right mouse buttons, which took some getting used to. 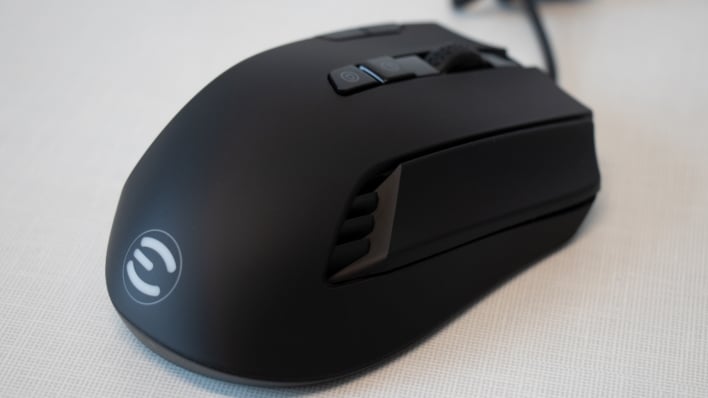 Speaking of the buttons, the main mouse buttons have a satisfying click, and the mouse wheel has a tactile roll. On the left side of the mouse, 12 different buttons can be mapped to various things, which is nice, but you must have larger hands or use a more claw-like grip to access them all easily, in the heat of battle. 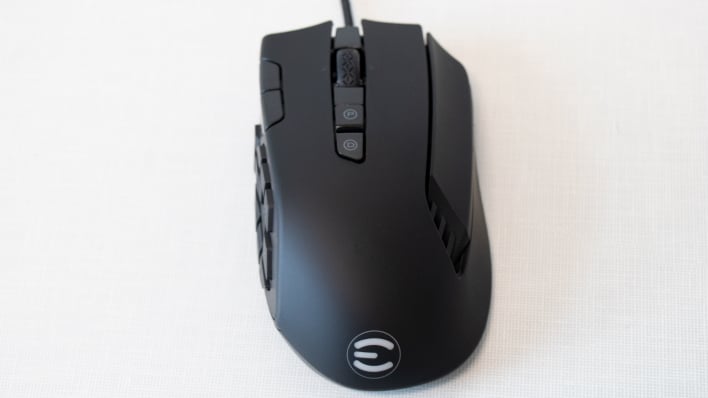 On the right side of the mouse, there is an extra button that sits roughly where someone's ring finger naturally rests, so we guess you could say the X15 has two right buttons. After getting used to the X15's layout, we're surprised we have not see a similarly-positioned button on other mice. However, a caveat to having all of these buttons, though some may be nice, is that the X15 can become almost cumbersome to use for some people.  When running it through our test drive, we found that you are not really going to want to use the X15 for all tasks, and it is certainly overkill for playing first-person shooters. However, it also depends on what peripherals you are used to, and if you have had an MMO mouse in the past then you're going to be familiar with its many advantages in that game genre.

Despite the concerns about the sheer quantity of buttons, the EVGA X15 can hit up to 16,000 DPI and has an 8,000Hz polling rate, meaning you can make quick, high-precision movements and have them reported to the system quickly. The X15 also weighs in at 110g without the cable, and is nicely balanced in the hand, so whipping across the mousepad is entirely possible. All told, we like the EVGA X15, which has an MSRP of $79.99. Like the Z12 though, the X15 has a promotional introductory price that's much lower. EVGA is actually offering this mouse for only $39.99 for a limited time. That's a heck of a price for an MMO-targeted mouse with a button configuration like this one.