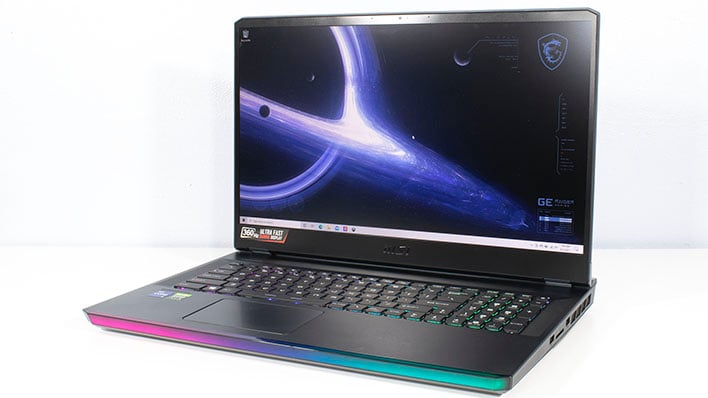 More powerful, more capable and feature-rich -- the current crop of gaming laptops with the most recent CPU and GPU platforms can offer a major upgrade to the enthusiast laptop experience. That's especially true these days with discrete graphics cards being hard to come by and marked up by factors of two or three above their MSRP. Suddenly dropping $3,000+ on a whole-system upgrade via portable powerhouses like these starts to make more sense financially. New desktop builds are great (if you can find components and all), but then you also have to factor in a new display, keyboard, and just about everything else needed for gaming.

The GE76 Raider from MSI falls into the camp of desktop replacement gaming notebooks. It's got the very best portable gaming components with NVIDIA Ampere graphics grunt and Intel Tiger Lake-H processing power. This beefy machine also packs in a crazy-fast high refresh rate display that should turn heads for fast twitch gamers especially. This system's panel clocks in at a super-smooth 360Hz. There's also a high-quality Steel Series keyboard, a full HD webcam and tons more packed into its chassis.

Let's take a moment to meet the MSI GE76 Raider and then we'll see if it delivers the kind of performance that its beefy specs suggest it might... 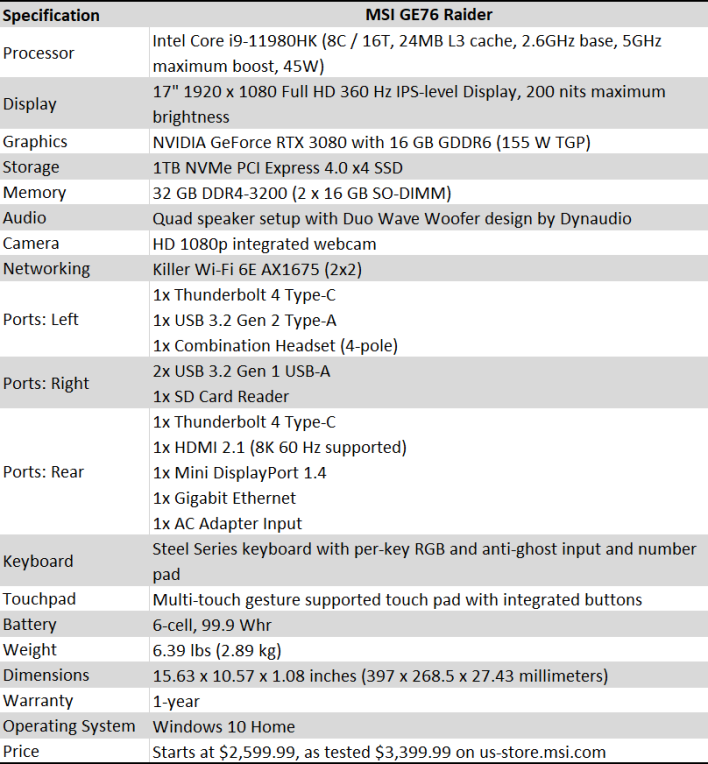 The GE76 Raider has just about everything a gamer on the go -- or even a gamer staying at their desk -- needs to enjoy the latest triple-A titles at super-smooth frame rates. It all starts with an Intel Core i9-11980HK, the fastest of Tiger Lake-H processor which is one of the most power laptop processors on the market currently. This CPU boasts eight cores and 16 threads via Hyper Threading with 24 MB of L3 cache. Those cores clock up all the way to a 5GHz maximum boost clock to push as much throughput as possible into this machine's GeForce RTX GPU.

Speaking of NVIDIA, the Raider has the green team's top-end GeForce RTX 3080 with 16 GB of GDDR6 memory. Despite sharing a name with the desktop version of the RTX 3080, the notebook iteration is scaled back in a few specs. Most critically, it's carrying a 256-bit memory bus rather than the 320-bit path in the desktop variant, and has just 6,144 CUDA cores rather than the 8,704 from its full fat namesake. However, as we've found out previously, the top-end mobile Ampere is still extremely powerful where it counts in pushing pixel for top tier PC games.

MSI didn't stop with just the best CPU and GPU around. GE76 Raider's memory config boasts a pair of DDR4-3200 SO-DIMMs. In our review unit's case, we've got 32 GB available, which should be more than enough to handle any gaming or content creation task we throw at it. Because the memory is standard SO-DIMM type, it can be replaced or upgraded later on as well. The same is true of the wicked-fast 1 TB PCI-Express 4.0 NMVe sold-state drive on board. It's a traditional M.2 2280 stick, which makes installing upgrades or replacements a snap.

Networking is handled by a combination of Killer's AX1675x 802.11ax Wi-Fi controller and a Killer E3100G 2.5 Gigabit Ethernet controller. The AX1675x has a 2x2 MIMO configuration, and when paired with our ASUS AX3000 router, maxes out our 400 megabit Internet connection and transfers files locally with ease. There's also Bluetooth 5.2 support aboard. While the E3100G is likely much faster than that, we weren't in a position to test out the 2.5 Gigabit Ethernet, since our current test router only handles Gigabit upstream connections. Needless to say, however, that this machine has networking features built for the long haul. 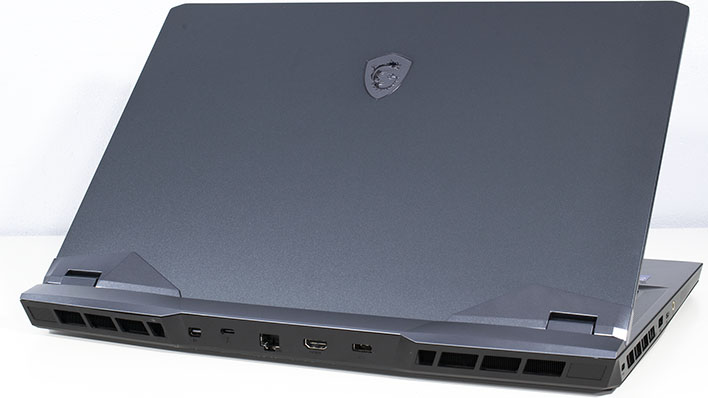 The body of the GE76 Raider is built from a combination of aluminum and polycarbonate, but the lid is completely strapped in machine aluminum. The lid has a single MSI Dragon jewel at the top center of the lid, but despite the gamer aesthetic, that logo doesn't have any lighting. That means the Raider wouldn't look terribly out of place in a business environment. The polycarbonate body has a premium, soft feel to it, although it does pick up fingerprints. There's no flex, the build quality feels very solid, and the materials feel great as they should in a premium gaming product.

The body of the GE76 Raider is pretty large, but there's a 17" display in there and its bezels aren't overly big. The extra size of the footprint comes from the decision to mount the hinges on top of the machine rather than behind it, but that just makes room for additional ports. For a desktop replacement notebook, having a plethora of connectivity is important, so we don't mind this design decision one bit. The hinges are sturdy and the display stays exactly where we put it. There's a fair amount of resistance, but it feels smooth and can still be opened with one hand. At 6.39 pounds of heft, this machine stays put without sliding around when opening one-handed, too. However, stowed in a backpack on the go, you're going to have to make sure you haven't been cheating on your arm and shoulder day workouts.

The display on the GE76 Raider may very well be a fast action gamer's dream. It's a 17-inch panel with a Full HD 1080p resolution that refreshes at an incredible 360Hz. While the 1080p resolution might be a little pedestrian, the display is large enough that Windows doesn't feel the need to scale it at all, so users get a full 1080 lines of resolution for web browsers and apps. Its ridiculously fast refresh rate paired with a speedy GeForce RTX 3080 should make this a gamer's delight, as performance in twitchy shooters should be excellent and smooth. 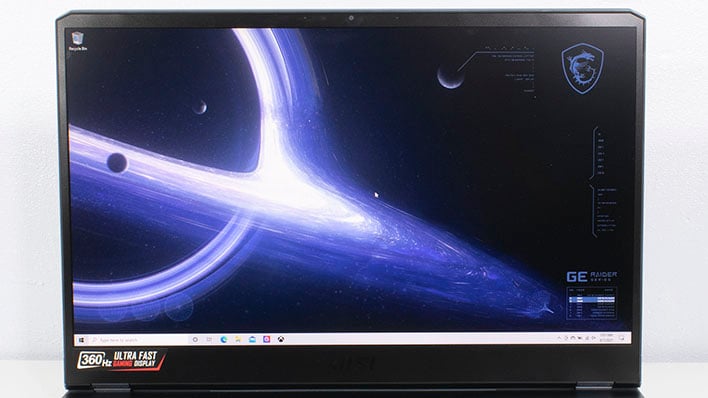 If we're going to level one complaint against the display it's the 200 nits of maximum brightness output. That brightness level is probably fine in most indoor scenarios but it does not cope well with direct sunlight from a window very well. Sunlight can be an annoyance with any display, though, and in our fairly bright office, the panel still only needed to be set at around 80% maximum brightness. That's not much for overhead, but we think most users will find enough light to enjoy gaming at least in traditional settings.

We rarely talk in depth about webcams on laptops because most of them are all the same thing. Typically, they have a 720p resolution and "good enough" image quality that works with Skype or Microsoft Teams. They're certainly not good enough for streaming to Twitch or the like, forcing budding streamers to buy discrete cameras. However, almost as if MSI heard the cries of streamers everywhere, the GE76 Raider has a Full HD 1080p webcam. The image quality here is pretty excellent, too. Kudos, MSI. For the new work from home trends, this makes great sense.

For audio, MSI gave the GE76 Raider a quad-speaker design with dual woofers tuned by Dynaudio. They're not nearly as good as anything you'd get in a decent $100 desktop speaker setup like Creative's SBS ES2900 but they do well enough, and are certainly better than most laptop setups. There's still a dearth of bass here (as expected), but the midrange is pleasant and the highs are crisp. They're good for chats or YouTube videos, but gamers looking for an immersive experience will want a headset or external setup. 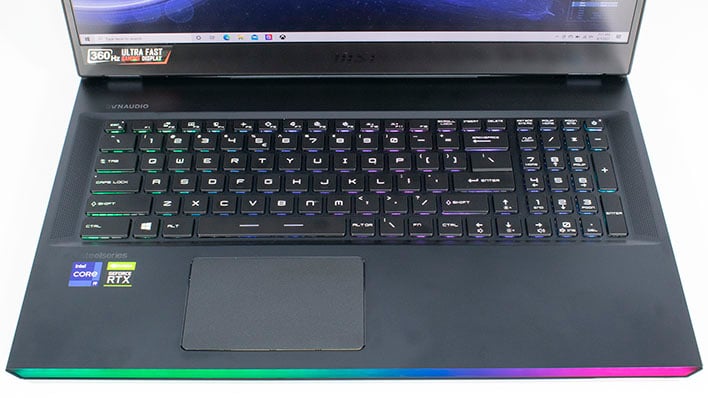 The keyboard in most of MSI's gaming laptops, including the Raider here, are built by Steel Series. It's not a mechanical keyboard, but the keys have a very solid feel, and there's no spongy, cheap membrane action here. They've got a tactile bump, where we'd probably prefer a linear actuation akin to Cherry MX Reds, but even the MX Ultra Low switches found in Alienware's laptops have a bit of a clicky feel to them. All by itself, the Raider's keyboard is really quite nice, and tenkey fans can rejoice in the presence of a discrete number pad. There's per-key RGB lighting on tap here, as well as an RGB strip on the front. All the bling can be disabled in the bundled MSI Center software. The trackpad is decently sized, and has integrated buttons and gesture support. It works fine, especially since it's centered on the main keyboard, rather than where your right palm would sit while typing, though serious gamers will want a dedicated mouse of course. 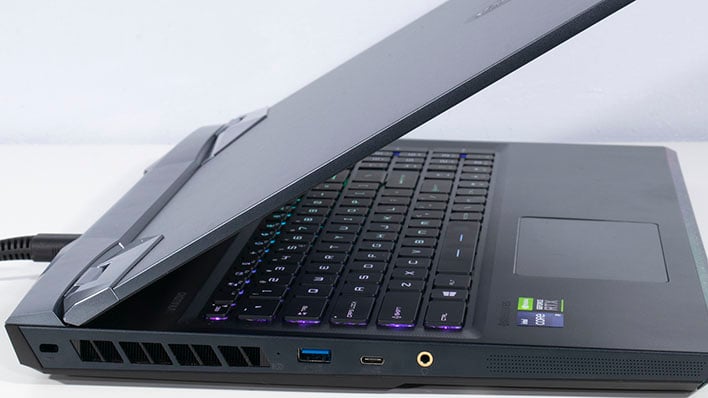 Ports are everywhere on this machine. MSI gave it no fewer than three USB 3.2 ports in total, including one 10Gbps port on the left, along with Thunderbolt 4, HDMI 2.1, and Mini DisplayPort 1.4. The ports are arranged in such a way that a docking station and the 280 Watt AC adapter all plug in the rear. The left side has Thunderbolt 4, the 10Gbps Type-A port, and a headphone jack. 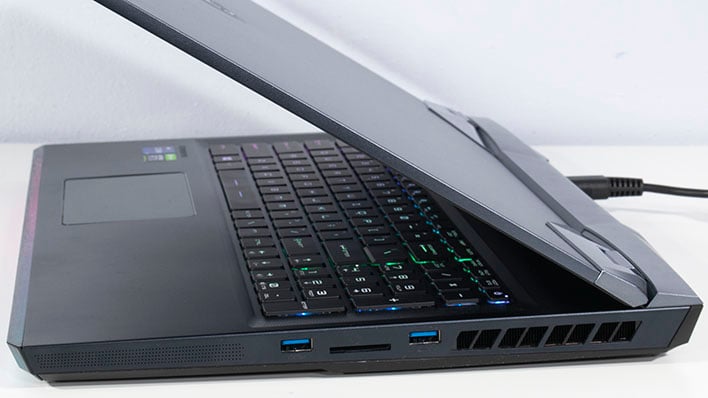 Around the right side, a full-sized SD reader is appreciated for some quick photo editing on the go. The other two USB Type-A ports flank the reader, forming the eyes of some sort of deranged smiley face, which isn't important but it's kind of cute. There are also some vents on both sides of the GE76 Raider, which do exhaust a little bit of hot air directly onto hands that might be positioned here for an external mouse, regardless of being a lefty or a righty, but most of the warm air exhaust exits through those two large rear vents. Thermals were reasonable, but regardless we felt this should be noted. We'll cover this more in our thermal testing.

MSI provided Windows 10 Home with the 20H2 update preinstalled on our system. There's no bloatware to speak of, and the only utility that was included out of the box was the MSI Center mentioned previously. This controls the RGB lighting, monitors hardware temperatures and fan speeds, and provides recovery and support tools. The keyboard and LED bar use a Mystic Light plugin from MSI that very much mirrors the main application that accompanies the manufacturer's standalone software. 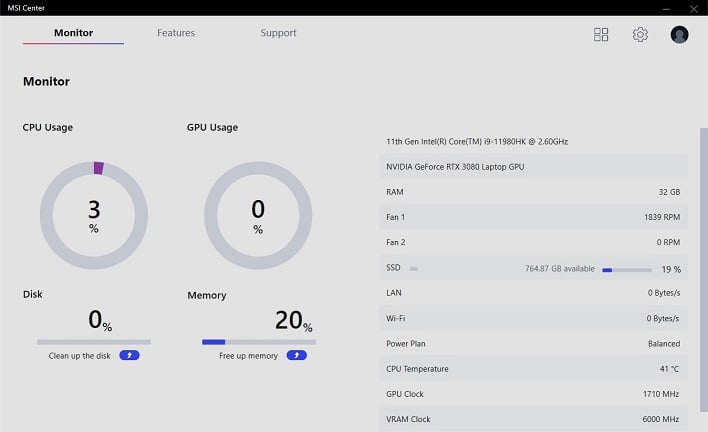 The MSI Center app also includes a whole host of optional plugins for things like image AI-assisted photo search and tagging, tuning audio, capturing in-game highlights, and switching color profiles for the display. It's very useful with no advertisements or nagging reminders to sign up for an account. Instead, MSI Center just gets down to the basics and supports this machine's features from there.