First up we ran the game's built-in benchmark on the Radeon RX 6800 XT. This is just a step down from the fastest GPU that AMD has ever produced, and should be a good representative of what we'll find on the high end. In our review we found that it does seem to give up a step or two to NVIDIA's Ampere cards with ray tracing, but we're hoping that the subtle effects in this game aren't too hard on it. Ubisoft listed it as a 4K 60fps target card in the system requirements, too. Given that, we tested at both 1440p and UHD 2160p with both FSR and DXR. 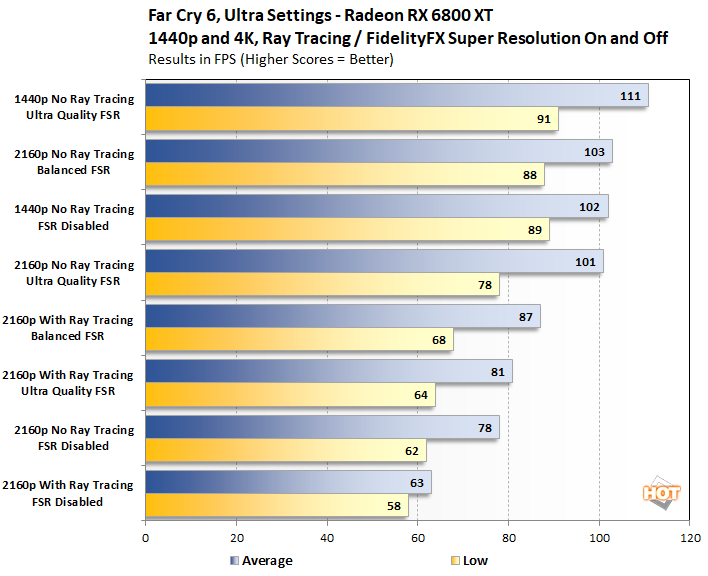 The fact that the game is playable at the Ultra setting with all the ray tracing effects enabled and no FSR is pretty great. We're used to those whole-hog ray tracing titles where every pixel needs some rays -- something like Control, for example -- taking an enormous toll. In this case, it's just the shadows and reflections, so the effect isn't as detrimental to performance. Still, it's nice to turn on FSR at Ultra Quality and get some performance back.

On the other hand, those with high-refresh 1440p monitors will likely be disappointed to know that the game just seems to stop getting faster at around the 110 fps mark with Ultra quality, regardless of the FSR settings. There are some settings to tinker with that affect the CPU, however, so there's likely more performance to be wrung from a high-end graphics card.

When it comes to 4K, the game is pretty darn smooth with an average frame rate up over 60 and a low that's awfully darn close to that same rate. You don't have to take our word for it, though, because we brought along our good friend Mr. Frame Time Chart. These settings are as taxing as this game can be, yet the Radeon RX 6800 XT manages to make it through. 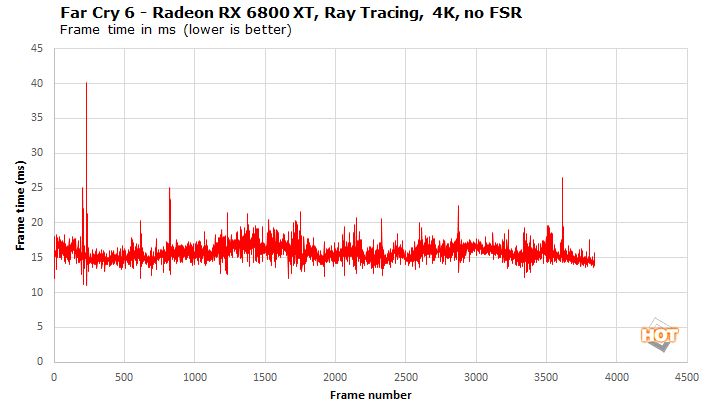 Not a single frame spikes beyond 40 milliseconds, and even then it's just one. Mostly we hang between 15 and 18 milliseconds with a few frames higher and a few frames lower. The sustained frame time never really seems to make it beyond 20 milliseconds (which works out to 50 fps) and that makes this a great target for a 4K monitor with FreeSync and Low Framerate Compensation (LFC) just in case it would happen to drop below the monitor's range.

The really good news here is that if the hardware can handle it, Far Cry 6 does not seem to suffer from any undue pauses or drop-outs. But what if you don't have a high-end graphics card from the current generation? The Radeon RX 5700 XT is still a quite popular choice on Steam. At its release in 2019, it was both power efficient and pretty fast, keeping up with the GeForce RTX 2070 SUPER that launched at the same time. We figure 1440p should be no problem here, right? 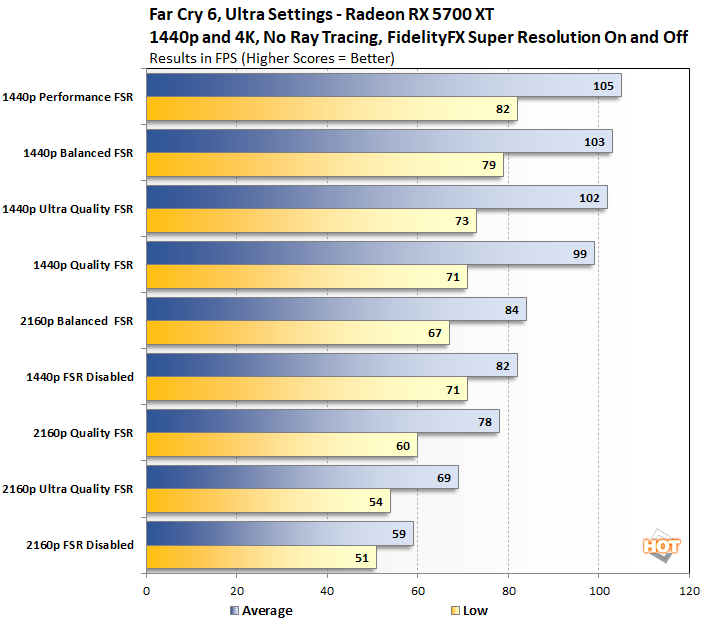 And that's definitely the case; 1440p posed no trouble at all. Greater than 80 fps at 1440p is pretty solid and the low of 71 are both smooth results here, and it only gets better with FSR. However, the benefit once again peters out just a bit north of 100 fps. The only thing missing is ray tracing support, but the game still looks good and runs quite smoothly without it.

However, with FSR we figure 4K should also be a possibility for the RX 5700 XT, and it is. Without AMD's super resolution upscaling tech, it's pretty borderline, especially without a variable-refresh monitor. However, once FSR kicks in, even Ultra Quality is extra playable and Quality is very smooth. We have trouble distinguishing FSR Quality from native rendering in motion, so we think 4K is definitely within range for this card.

The GeForce RTX 3070 and 3060 were intended to be midrange and mainstream options with ray tracing; then the chip shortage happened. Still, these cards are climbing the Steam hardware survey charts, so gamers must be getting their hands on them somewhere. At any rate, FSR is a vendor-agnostic technology so we can flip on ray tracing and upscaling on both. 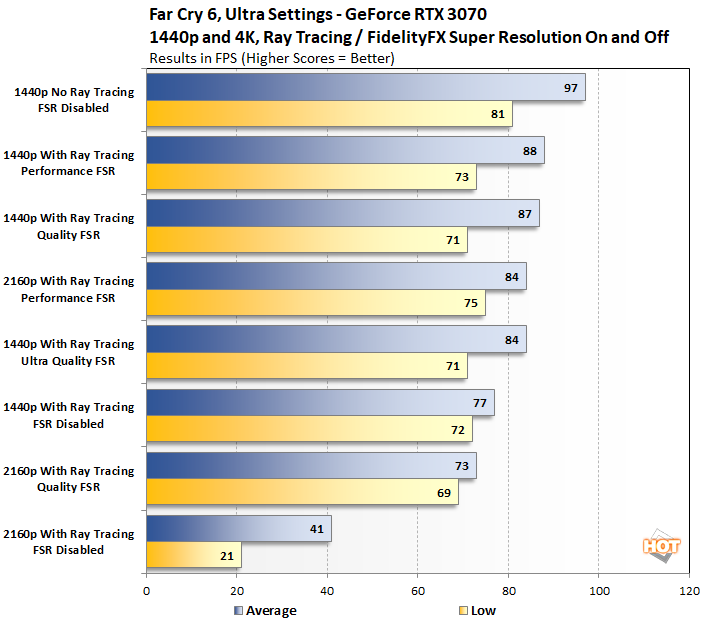 Starting out with the GeForce RTX 3070, we see that it's a fair amount faster without ray tracing than the Radeon RX 5700 XT, but still trails the RX 6800 XT by a ways. 1440p was once again no problem whatsoever even without FSR and with ray tracing enabled. Hitting nearly 80 fps with ray traced shadows and reflections makes for some pretty excellent performance, and FSR is able to get some of that back.

However, this card is really not cut out for 4K gaming with ray tracing enabled. 50 fps with all the ray tracing enabled isn't too shabby, but there's a pretty noticeable hitch or two in every benchmark run. When actually playing the game, it's worse if you just run around in random directions all willy nilly, and it crops up at just the worst possible times. I don't have to tell you about it, though, because I can show you. 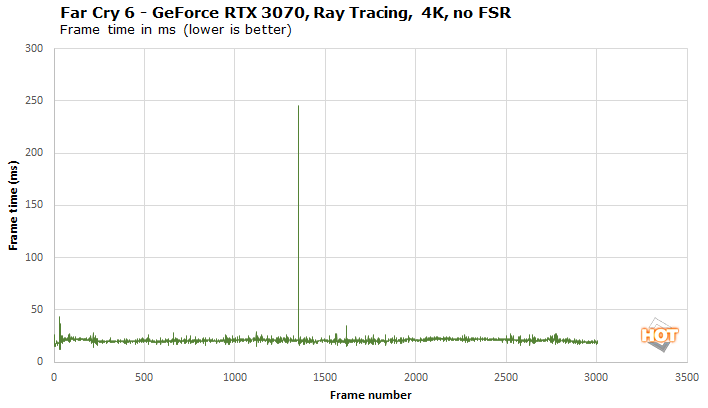 In reality, though, it's not fair to punish the GeForce RTX 3070 for this, since it's not really meant to be a 4K graphics card. The extra VRAM of a GeForce RTX 3080 and especially a 3090 would probably make a huge difference, though. We can take out that one outlier and see that the performance is much more reasonable, though. 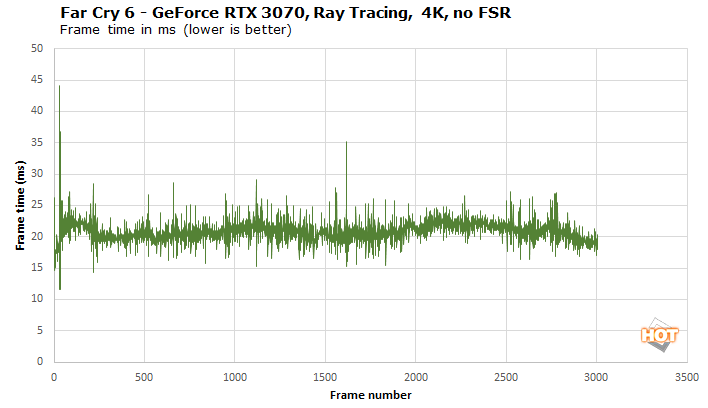 Here we kind of oscillate between nearly 60 frames per second and more like 45 to 50. In the grand scheme of things that's fairly steady. If not for the big spike (which is always present without fail) the game would be pretty reasonable at 4K. That's not bad at all, really.

Finally, the GeForce RTX 3060 is to date the weakest Ampere card on the desktop, though laptops do get a 3050 and 3050 Ti. At any rate, it still supports ray tracing and has 12 GB of GDDR6 memory so it should be capable of 1080p with no problems and might even be passable at 1440p. 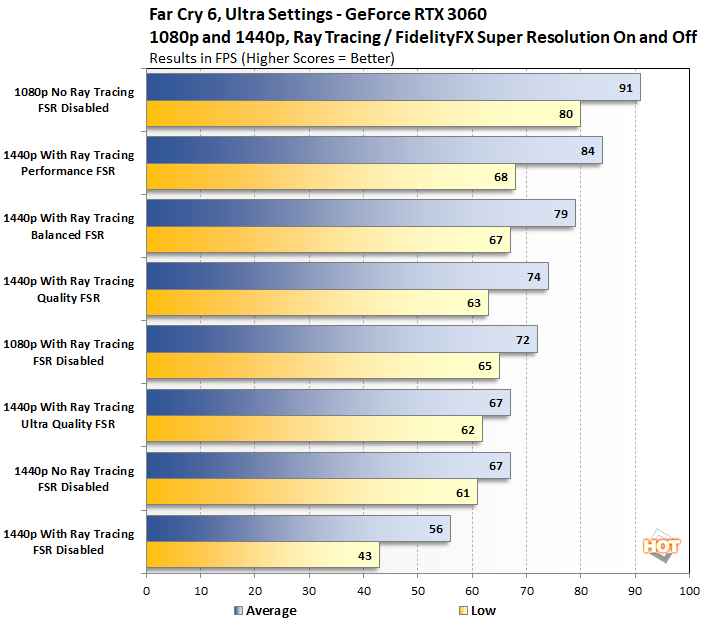 And that's exactly what happens. At 1080p with ray tracing enabled and no FSR, we hit up over 70 fps and the low was over 60. FSR would likely claim more performance, but we saved that testing for the higher resolution. Meanwhile, the game plays like a champ without any ray tracing, hitting up over 90 fps with the Ultra quality setting.

Once we get up to 1440p, the situation here isn't as dire as it was for the RTX 3070 at 4K. The frame rate is still lower than we'd want, but nearly 60 fps and an average up over 40 is nice, especially if the monitor supports FreeSync or G-Sync. To get the frame rate higher, we could turn off ray tracing or leave it enabled in favor of Ultra Quality FSR. Either way, we get about the same performance up over 60 fps for an average. It goes higher from there, climbing all the way up to 84 fps with a 70+ low.

Ubisoft was pretty ambitious both from a technical perspective -- adopting two new technologies for an older game engine is no easy task -- and a narrative point of view as well. The real-world, highly-charged politicized story and setting may not appeal to everyone, especially to those who look to gaming for an escape from the real world. However, if you can look past or even embrace that aspect, there's a gripping tale to be told. 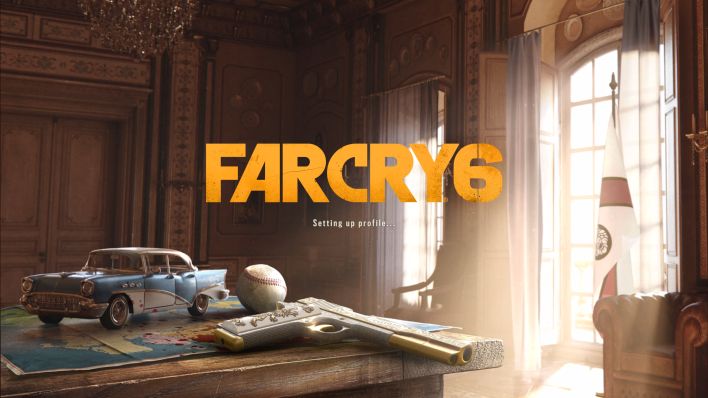 This could be a critical step for gaming as a medium. We're used to seeing the real world tackled in movies and TV shows, but "statement" games are less frequent. We don't want to give anything away, but there's a lot to the plot and once this review gets published we're going to dive back in to see what's out there. It can actually be emotionally draining at times, but that kind of cathartic reaction is just what some folks might be looking for.

From a technology standpoint, Ubisoft has done a great job with Far Cry 6. The game looks wonderful without any ray tracing, but the addition of realistic reflections and shadows makes the island come alive. The performance on modern hardware is great even at the highest settings, and FidelityFX Super Resolution will help gain back whatever is lost. It's also very light on the system requirements so those with aging hardware should be able to play well at lower settings, too. Overall, Far Cry 6 seems to have benefitted from the delays and feels polished.

Overall, we think Ubisoft hit it out of the park with Far Cry 6. The gameplay is familiar to fans of the franchise with all the open-world exploration, scavenging, crafting, and shooting they expect. The island nation of Yara is both beautiful and absolutely huge. If you're into the story or just need a good, well...cry from a game, the latest title in the Far Cry series is a great option.
PREV PAGE