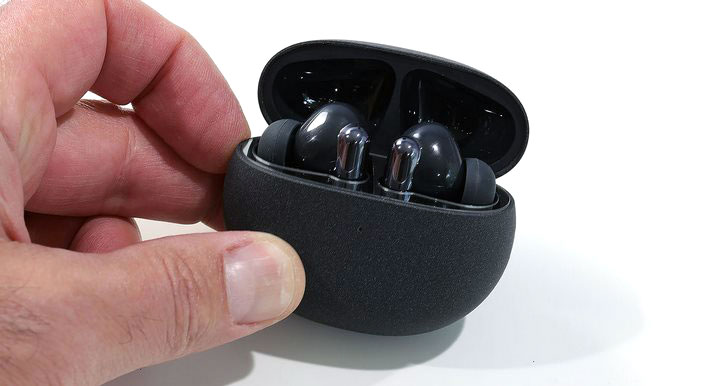 When it comes to wireless earbuds, you might say we're fairly particular and almost snooty about them. It's not easy to reproduce decent acoustics with such tiny drivers, never mind with quality active noise cancellation (ANC) that doesn't make it sound like you're listening to music in some kind of weird anechoic chamber. Regardless, at under $100, that's what the TCL MoveAudio S600 True Wireless Earbuds try to achieve.

We recently looked at OnePlus' $149 ANC wireless buds offering with the Buds Pro, and found them to be a quality set of wireless buds with a few caveats, most of which could be remedied in software or firmware. TCL's MoveAudio S600 buds were recommended to us as a follow-up product review, weighing in at a full $50 less and with wireless charging on board as a bonus feature over the OnePlus Buds Pro.

Though the company is a major display manufacturer, you may be more familiar with TCL as a relative newcomer in smart TVs and smartphones, but the Huizhou China-based electronics giant also manufacturers all sorts of products, including refrigerators, air conditioners, various small appliances and, yes, now earbuds as stand-alone or companion products to their smartphone lineup. But can a pair of $99 wireless ANC buds from a company that manufacturers everything but the kitchen sink (maybe that too) really measure-up in terms of sound quality, features and comfort? Let's dig in and find out...

TCL's MoveAudio S600 earbuds are based on a full in-ear design, similar to other offerings on the market that take design cues from Apple's AirPods Pro, but with a slightly longer tip that extends down just a touch more for better mic positioning (more on this later). The Ultra Matte Black version we have here sport a chrome finish on plastic construction that looks a bit more subdued in your ear, versus rocking the traditional white straw tips that awkwardly poke down. TCL does offer them in other colors as well, including Graphite Gray, Pure Marble (white), Silver Chrome, and Turquoise Blue. 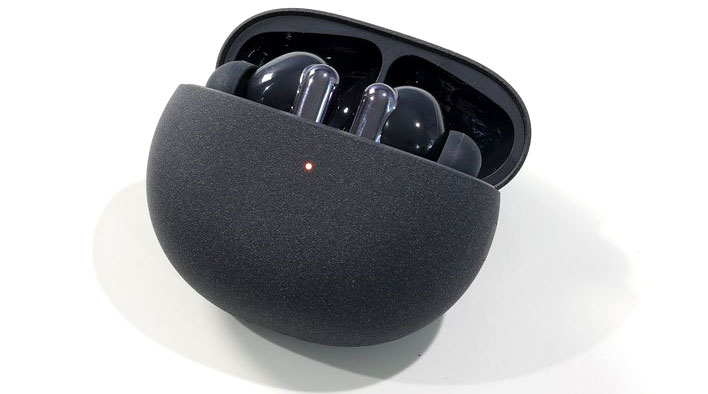 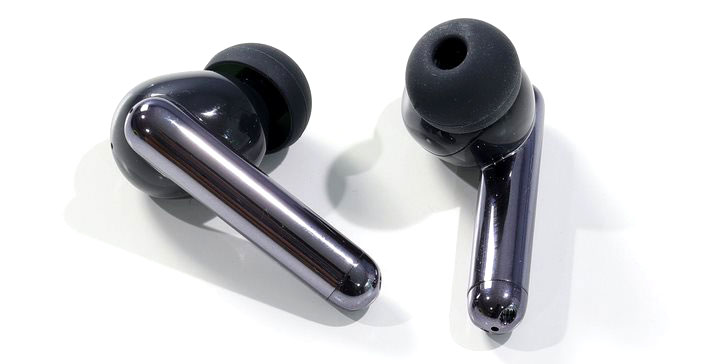 On the top of each tip is a touch control area that affords the standard controls of single tapping for pause or play, double tap for next song skip ahead, and triple tap for previous song. These functions are mapped to the right earbud by default, however, you can assign a single tap volume up or press and hold volume down functionality to either earbud in the TCL Connect app, which we'll look at shortly.

The bulbs themselves have a simple driver setup underneath the soft rubber tips and no porting that we could identify. There are five sets of rubber tips included, ranging in size. I had to specifically move up to the largest ear tip for the best fit and seal acoustically, and in general I had no problem having these buds staying put in my ear, once I had them setup for proper fit. All told, the TCL MoveAudio S600 are well-made, comfortable and their kit bundle is equipped for fitting a myriad of ear shapes and sizes.

Also included is a charging case that takes approximately 2 hours to charge over a USB-C connection. The buds support wireless charging with any Qi standard charger as well. The buds themselves offer a 10 minute fast charge time that gets you up to an hour of listening time, while a full charge is claimed to offer 5 or 7 hours of play time with ANC (Active Noise Cancellation) on and off, respectively. The charging case's wireless charging feature is a real plus, especially if you already have a wireless charger for your phone. These earbuds feature built-in 55mAh batteries while the case houses a 500mAh battery. The buds themselves also support Bluetooth 5.0 BLE (Bluetooth Low Energy) and are IP54 dust and water resistant. That is to say that they are not impervious to dust or water, but will resist a base level of debris and sweat, for active users in the gym or at the beach, for example.

As noted earlier, we consider our ears pickier than most when it comes to both quality acoustics and comfort, and the TCL MoveAudio S600s deliver well on both fronts. Though surprisingly perhaps, it's their dynamic range, balanced output and decent ANC (for the price) that are the highlights here. These buds have 10mm drivers with 6 Active Noise Cancellation microphones; three each side, two inner and one outside facing mic, as you can see in the diagram below. 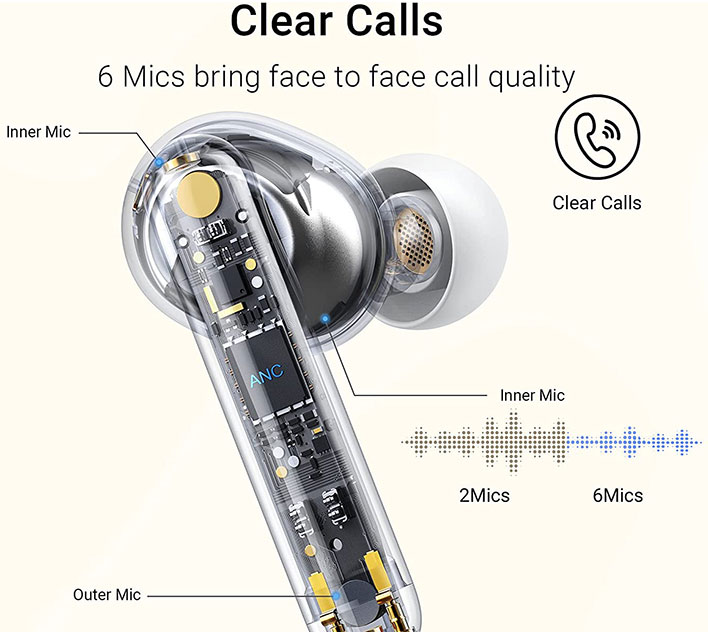 In terms of their Active Noise Cancelling (ACN) features, the TCL MoveAudio S600s do a reasonably good job of cutting out background noise, whether it be the crappy house mix at your local gym or your next door neighbor's lawn mower during a Friday afternoon attitude adjustment hour. They're not perfect in this regard but for $99 earbuds they're pretty darn solid. Transparency mode performance with the S600s is excellent, should you want to let the outside world in a little bit and not be a total anti-socialite. Noise Cancellation mode isn't exactly a complete block-out, with some external noise floor still bleeding through, depending on the environment you're in. TCL's MoveAudio S600s perform slightly better than the OnePlus Buds Pro in this regard, though what's satisfying about this feature is that it doesn't change your listening content audio quality much at all, unlike the OnePlus Buds Pro that do tend to sound really bass-heavy out of the box in this mode, unless you manually dial them back. 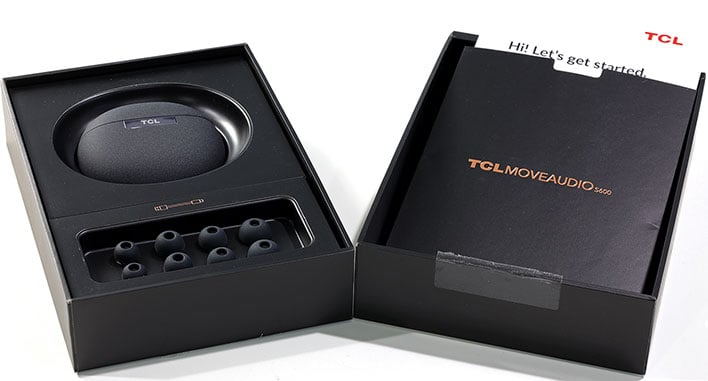 And that brings us to overall audio performance, which we were pleasantly impressed with right out of the gate the first time we fired-up these buds without any tweaking, again except for proper ear tip fit. Fitting the correct size tip (as you can see above TCL gives you 4 additional sizes/sets) for your ear, so there's a good seal between the bud and your ear canal, is absolutely critical for in-ear type wireless earbuds, though it's too often overlooked. I personally had to move up to the largest tips offered in the kit to get the right fit, but once I figured out my sizing, these buds did not fail to impress, especially for their price point.

In terms of range, the TCL MoveAudio S600s offer an open, natural sound setup by default with tight low-end response that doesn't overpower and balanced midrange for clean and clear vocals. Many times in-ear buds are devoid of proper low-end or are conversely low-end heavy, and finding the right balance isn't always easy, even with a good EQ utility. These buds offer a generous, but not too heavy or loose low-end that reproduces the kickdrum of the chilled house jams of Sade, or the guttural punch of Velvet Revolver with proper accuracy. At the other end of the spectrum, high hat cymbals ring out crisp, clear and metallic, rather than the muddled bacon frying tones you can sometimes get from cheaper wireless buds. In short, the S600s are some of the best sounding wireless earbuds we've heard at their $99 price point and even higher into the $150+ range for that matter. We think most people will find the TCL MoveAudio S600s sound great for music, movies, game day or whatever else you throw at them.

Speaking of which, we also threw a little 2.5 Geeks livestream action at the S600s and, in addition to quality acoustics, Bluetooth latency was a non-issue. In terms of voice quality, for typical phone calls, the Move Audio S600 and its six mic setup performs decidedly better than the OnePlus Buds Pro we reviewed last month. And in fact, for Skype or Zoom calls, the mic sound quality of these earbuds is pretty great and totally serviceable in professional meeting settings. If your wireless buds need to serve as work from home or creator studio in-ear monitors for Zoom calls or podcasting, the TCL MoveAudio S600s can easily step up and address these use cases as well.

Software-wise TCL offers its TCL Connect app for managing the features of the MoveAudio S600s. Touch functions for playback control, noise control, Google Voice, and volume control can all be tweaked here, as well as other features like pause/start functionality when the buds are removed from your ears or put back in. Charging base and earbud battery life indicators are also listed here as you can see, though we do wish there was some level of in-app EQ functionality and control. 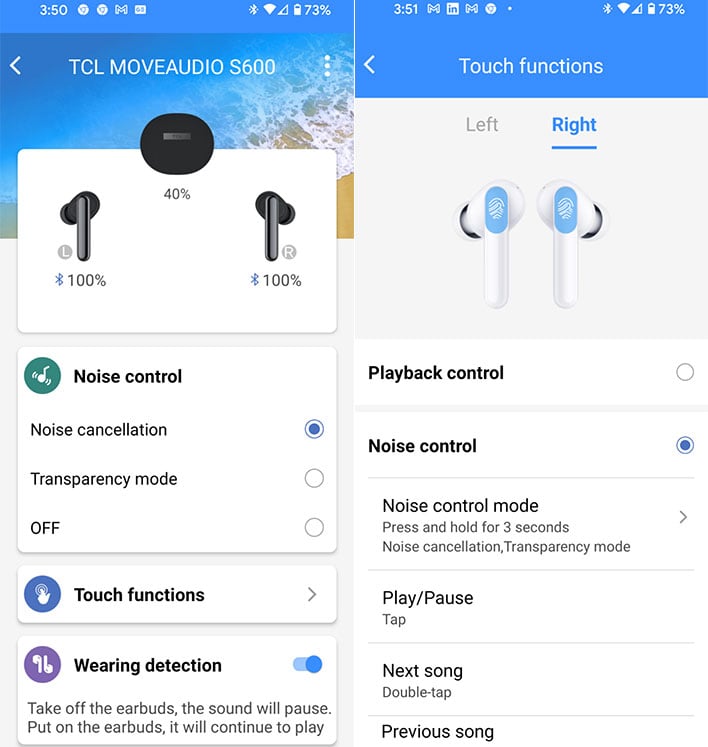 On the battery life front, our experiential testing never pushed the limits of these buds past the duration of a 1.5 hour workout or a 2 - 3 hour NFL football game. However, day-long on/off mixed use wasn't a problem at all and for the majority of average earbud users, you won't find yourself having to top off S600s at inconvenient times all that often, unless you've simply neglected charging for extended periods. TCL notes these buds will last 5 hours or so with ANC on and up to 7 hours with ANC off, and we'd say these are fairly accurate numbers. And again, with both quick charge giving you an hour of playback in just 10 minutes of charging, as well as the convenience of wireless charging if you're so equipped, we don't see charging or battery life in general becoming a hurdle for the vast majority of mainstream consumers.

All told you can color us rather impressed with the TCL MoveAudio S600 Wireless Earbuds, though we do have one caveat in terms of setup that we haven't covered yet, which is Bluetooth pairing. See that fancy textured charging case below? On the left side, with the TCL logo facing you, there is an almost hidden, secret button. In fact, it's so hard to notice that it took us a while before we discovered it to put these buds in active pairing mode. We initially paired them easily to our Android phone just flipping open the case on first setup, without the need for the button. However, when we wanted to pair them with other devices we were baffled for a bit. Of course a little RTFM goes a long way, but color code that mystery button or something will ya TCL? We know, such a small quibble but hey, it was a thing for a while until we dug a little deeper. 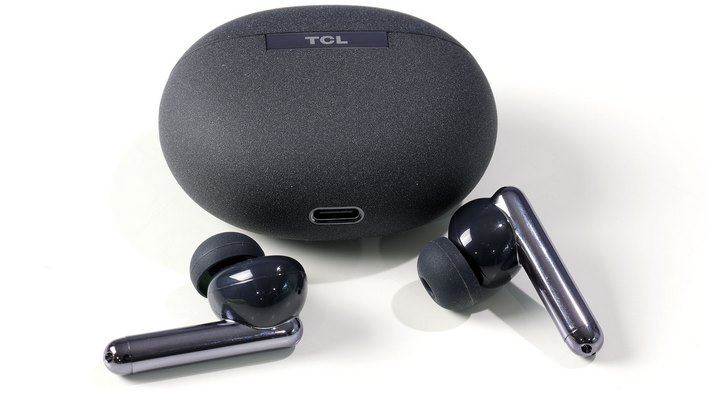 
Other than that funky hidden button, there's really a lot to like about the TCL MoveAudio S600s, and for not a lot of your earned fun coupons, relatively speaking. At $99, these are some of the best ANC wireless buds we've tested yet. For all the reasons we've stepped through here, including their top-notch mic system, decent ANC and balanced, rich acoustics right out the box, they've garnered our Editor's Choice award. 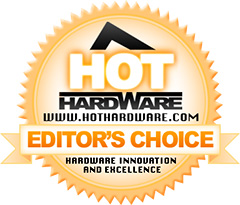