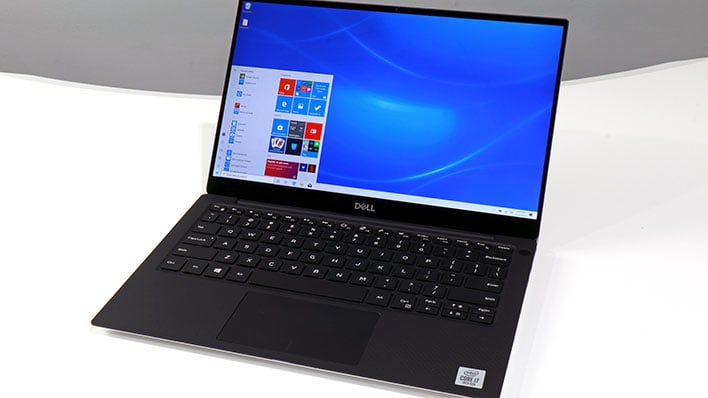 Dell's XPS 13 family is split into two main product lines; 2-in-1 convertible notebooks and traditional clamshell-style laptops. It wasn't too long ago that we looked at the latest 2-in-1 with Intel's 10th-generation Core i7-1065G7. That machine was a thin, light, flexible beauty and a great performer, thanks in no small part to its improved graphics capability with the Intel 10th Gen Core series of CPUs. So when Dell offered up the latest XPS 13 clamshell version with a bright 4K display and Intel's Comet Lake 6-core 10th Gen CPU on tap, we just had to kick the tires a bit.

For those not in the know, 10th-generation Intel Core mobile processors have two very different CPU families. The first is what we had in the 2-in-1 convertible model we reviewed, based on Intel's latest 10-nanometer fabrication process, dubbed Ice Lake. Intel also offers a 10th Gen family based on a refined version of the same 14-nanometer process that the company has used since 2015 Broadwell and Skylake CPUs, known as Comet Lake. Still, Intel has figured out how to increase performance generation-to-generation, and thus Dell's XPS 13 7390 also offers this beefier six-core processor option as a result, and it's what we have on the test bed today. 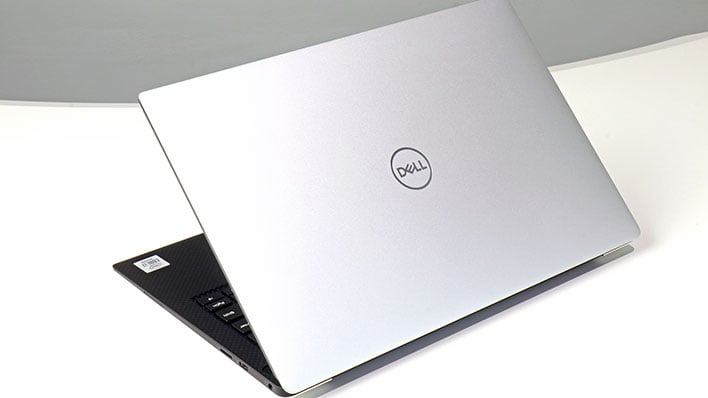 The XPS 13 comes in a variety of colors: Platinum Silver with a black woven carbon fiber palmrest of our review unit, Rose Gold with white woven fiberglass, and a totally Frost White fiberglass option. The Rose Gold and Frost White options come with a $50 upgrade charge based on the additional materials cost. Let's take a closer look at what's under the hood of our test unit as well.

Intel's Core i7-10710U processor is the brains behind this operation. This processor sports six cores with Hyper Threading and 12 MB of L3 cache in a very modest 15 W TDP. Those cores should chew through any heavily-threaded application, though that may not be the typical ultraportable laptop workload. To maintain thermal headroom, the base clock of this CPU can drop all the way down to 1.1GHz. It should still be plenty responsive thanks to a maximum turbo speed of 4.7GHz, however. And so, as long as the XPS 13's cooling solution is up to the task, there's a lot of performance available here. We would have liked to see Ice Lake CPUs like the Core i7-1065G7 and its extra graphics horsepower, which helped the XPS 13 2-in-1 play at least some AAA games at low settings, but c'est la vie; the notebook gets that 10th Generation Core i7 sticker on the palmrest either way. 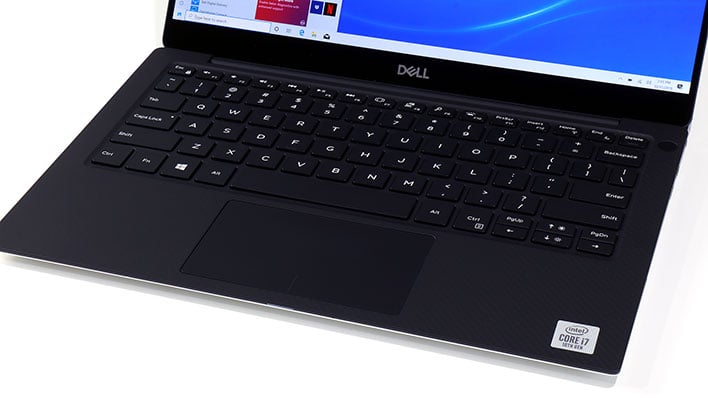 As is typical with the XPS 13 family, the system's 16 GB of LPDDR3-2133 RAM is soldered to the motherboard. Buyers should beware to configure their purchases to have as much memory as they can reasonably afford. This system's 16 GB config should be plenty for most users, however. On the bright side, primary storage can be upgraded later in a standard M.2 slot. A 512GB M.2 NVMe SSD is enough storage for most users now, and this setup still allows for upgrades later.

Dell outfitted the XPS 13 7390 with fast wireless networking, too. Killer's AX1650 supports the nascent 802.11ax WiFi-6 specification with a 2x2 MIMO antenna array. There's also Bluetooth 5.0 available to pair a wireless headset or a smartphone, which is a prerequisite for the new feature that allows Android owners to make calls from their PC via the Windows Your Phone app. 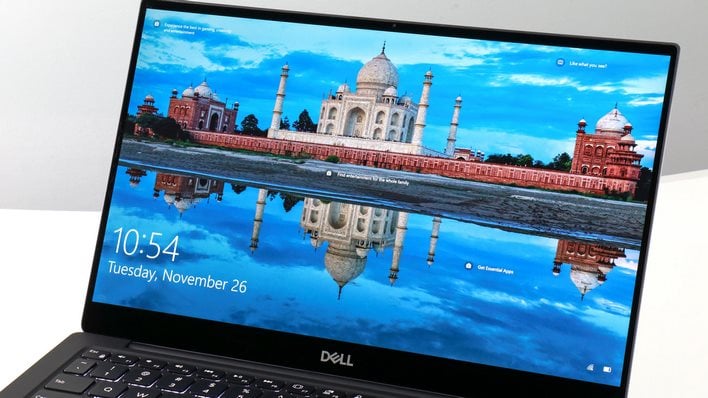 Externally, our particular XPS 13 7390 has a gorgeous touch-enabled InfinityEdge display with a resolution of 3840x2160. This 4K IPS panel looks great at all angles and has a maximum brightness of 400 nits, which is plenty bright in almost any lighting condition. The panel's digitizer can recognize up to 5 points of touch at once. That's a little less useful on a clamshell notebook than it is on the XPS 13 2-in-1, where the screen can fold all the way around and work like a tablet. However, there are some obvious instances where the touch panel is more convenient than using a trackpad, if you don't have a mouse handy.

Right above the display sits a 720p HD webcam, which is very typical for just about every notebook these days. These cameras do a fine job on Skype calls. One thing we miss from other notebooks like Lenovo's ThinkPad X1 Carbon is the physical privacy shield that can obstruct the camera and prevent it from being accidentally turned on. We love this feature when it's available, and miss it when it's not. Dell did equip the camera with a temporal noise reduction filter, which should reduce graininess in the video.

The XPS 13 also has a pair of side-firing stereo speakers enhanced by Waves MaxxAudio Pro sound filtering. These tiny speakers can fill a small room with sound, but there's not really any bass to speak of. That's easily rectified using the machine's headphone jack, which can drive a headset with an integrated microphone, or connect to external speakers with plenty of low end. The microphone array does a good job of cancelling noise from the speakers, and we had no problems using the built-in speakers and microphone to carry on a Skype call sans echo. 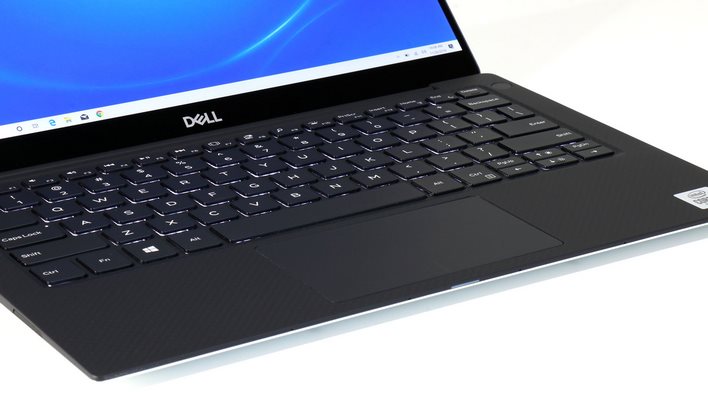 Our Platinum Silver review unit has a black carbon fiber palm rest, which serves as the home for a backlit full-size keyboard. While the XPS 13 2-in-1 we recently tested sports a MagLev keyboard, this unit uses typical scissor switches with 1.3 millimeters of travel. That's enough travel for decent tactility and compared to the MagLev option, this keyboard was still comfortable to type on. Below the keyboard is a seamless glass touchpad with integrated buttons.

As far as ports go, Dell kept it pretty simple with the new XPS 13. Intel's Thunderbolt 3 ports can do just about anything, from power delivery to PCI Express connectivity to carrying a display signal. Dell gave the XPS 13 7390 three of these ports, two on the left and one on the right. This system can power two 4K external display and connect to a wide variety of peripherals. There's no proprietary power port, even; the XPS 13 7390 relies on a USB Type-C adapter to keep the battery charged. There's not even a proprietary dock connector, which is great. Using a standard port with the do-it-all Thunderbolt 3 spec lets us connect the PC to a single cable and have USB, Ethernet, keyboard, mouse, displays, and much more on a single connection with a Thunderbolt dock.

To keep dongle reliance to a minimum, Dell helpfully included a USB Type-C to Type-A converter in the box. There's also a four-pole universal headset port and a micro SD card reader which had no problems reading any of the SD cards we had lying around. We applaud Dell for maintaining that SD card slot, as it appears to be a dying option these days for some brands, which does not make sense to us (Lenovo, we're looking at you). Regardless, there's enough connectivity here with the XPS 13 to do just about anything, and get access to most any modern external peripheral.
NEXT PAGE