Our Dell XPS 13 7390 test unit came with the Platinum Silver finish. That means there's a rugged aluminum top and bottom shell with a black hybrid carbon fiber body sandwiched in between. The aluminum is nicely finished and feels smooth to the touch. Meanwhile, the carbon fiber palm rest should stand up to use and abuse with similar comfort. Together, these two material choices make for a lightweight notebook—the XPS 13 weighs in at just 2.7 pounds, both according to Dell's specifications and our kitchen's food scale.

The display is covered in Corning Gorilla Glass 4, too, so Dell says it should hold up against drops. That glass covers almost the entire top cover because the bezels are so thin. Like other XPS systems we've looked at in 2019, the webcam module in this thing is really small. The company put a lot of effort into making its webcams look good, too. There's a four-element lens which Dell says keeps corners from distorting, and of course that top-mounted location is optimal for shot angle.

Dell says the new variable torque hinge of the XPS 13 makes the system easier to open yet keeps the display in place once it's set. We had no problem opening the lid with one hand, though once it got farther along in the arc, the base started to lift up. Unfortunately the hinge doesn't open a full 180 degrees, but it opens plenty for just about any traditional use case. 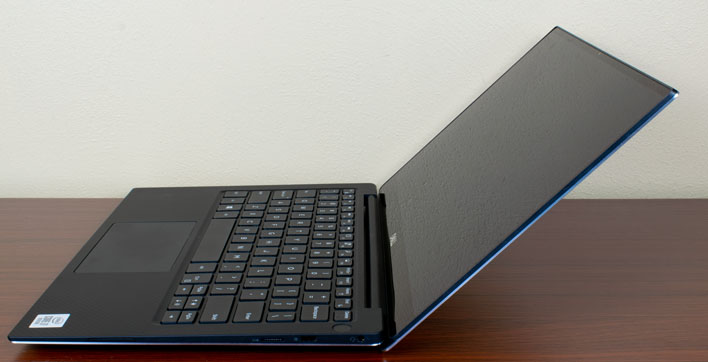 Dell makes two other finishes available—Rose Gold and Frost White. Both of those trade in the black carbon fiber palmrest for a nine-layer white woven fiberglass, similar to what we saw on the XPS 13 2-in-1. Dell says all those layers make the fiberglass palmrest sturdier than plain ol' plastic. We really liked the premium feel of the fiberglass on that unit, so we have no doubt those finishes would feel great as well. Folks who want an alternate finish will have to pay for it, though. Again, Dell extracts a $50 upcharge for either of those lighter finishes.

Aesthetically, we really like the look of the XPS 13 7390. Dell went with a "less is more" approach to industrial design typical of its XPS family. Aside from an etched Dell logo on top and a similar XPS logo on the bottom, there are no markings on the body and the design has a very clean aesthetic. The XPS 13 would certainly blend right into any business setting with its slick, understated appearance.

Dell backs the XPS 13 7390 with a one year on-site warranty after remote diagnostics. That doesn't cover accidental damage, though Dell Premium Support Plus will cover the system against both manufacturing defects and accidental damage for up to five years, as an add-on at the time of purchase.

When we flipped the 7390 over to open up the chassis, we were greeted by a sizable vent that provides a source of cool air to the dual fan system. A total of eight Torx T5 screws and a little gentle prying were all that separated us from the inside of the Dell XPS 13 7390. Let's see how user-serviceable it is. The bottom was secured tightly enough that fingernails wouldn't cut it for pry tools, but in our case, a plastic guitar pick did the job. 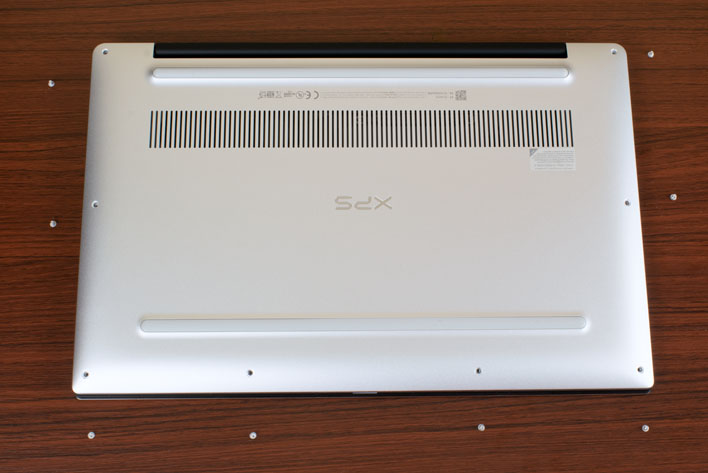 Once we get inside, we can see that the XPS 13 7390's cooling system employs a pair of small blower-style fans with a couple of heat pipes transferring heat to a small fin array at the rear of the PC. Since this notebook relies solely on the Core i7-10710U's processor cores and integrated graphics, the cooling system doesn't have to be exotic or oversized.

As far as user serviceable parts, we can see the M.2 NVMe SSD right next to the CPU. The SSD wears a thin metal heat spreader which should help keep the NAND storage cranking along under pressure. As far as upgradable components go, that's it for the new XPS 13. The RAM is soldered to the motherboard just like it's always been, and when you get a look at the motherboard, it's easy to see why. There's nowhere for an SO-DIMM slot to fit in the design, let alone two that would utilize the processor's dual-channel memory controller. 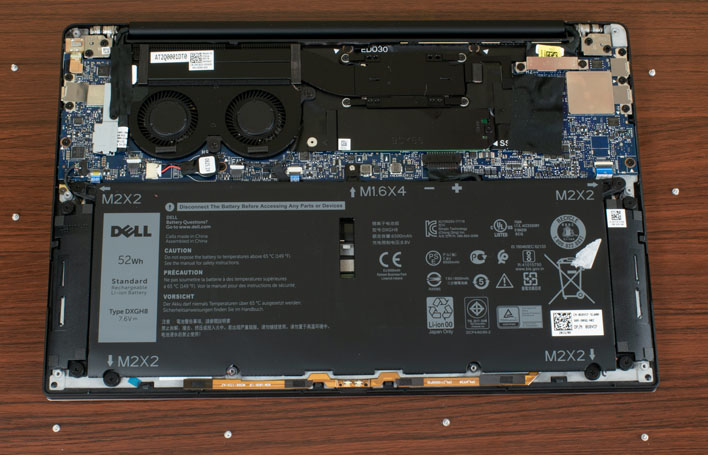 Dell outfitted the XPS 13 7390 with a 6,500 mAh 7.6 volt battery, which is good for 52 Watt-hours. Nearly half the total area inside the system is dedicated to the battery, too, so it doesn't seem like Dell had room for much more. We're pleased to see that the battery is easily replaced by removing four Philips head screws as well. The long shapes on each side of the battery house the system's stereo speakers.

As usual, Dell keeps software to a minimum with the necessary drives and doesn't load its XPS systems down with too much bloatware. Dell's Help & Support and SupportAssist apps make it easy to diagnose and troubleshoot any issues users might have with the PC. As far as additional preinstalled applications go, Dell included Foxit PhantomPDF, a McAfee LiveSafe, and Dell a trial for Microsoft Office, which activates right out of the box for Office 365 subscribers who log in. While some users will find this software unnecessary, none of it unnecessarily bloats memory usage or thrashes the CPU at idle.

The most interesting Dell app is Dell Mobile Connect, which is similar to Microsoft's Your Phone app only it's more capable. Mobile Connect is similar to Your Phone in that Android phone users can mirror their device's screen, receive and send text messages, and receive notifications. The similarities end there, however. Your Phone recently gained the ability to make calls from Android devices, too. However, iPhones need not apply with Microsoft's app. Mobile Connect, on the other hand, supports iOS and Android both for its feature set. While iMessage is a seamless way to send texts on iPhone, iPad, and Mac devices, Mobile Connect brings Dell PCs running Windows 10 into the fold, too. The apps that are preinstalled on the XPS 13 seem to be genuinely useful for some cases, but many folks use Google docs instead of Office, Adobe Reader DC instead of Foxit, or another security suite other than McAfee's. Fortunately, these extra apps don't hog a ton of resources and can be uninstalled simply enough. It's a far cry from some budget machines, and we're glad that a premium notebook like the XPS 13 isn't full of nonsense.

Dell also includes its own custom power management profiles with the XPS 13 7390, which manage acoustics, battery life, power, and performance. For all of our tests we left Dell's settings alone, which meant using Dell's power profile for both performance and battery life tests. This should give us a realistic idea of what typical users can expect out of the box. Dell says its customized settings keep performance from degrading under a sustained load while providing plenty of battery life. We'll see if that's the case later on.

Now that we've got a good feel for how the system works and feels, let's take a look at how it performs.
PREV PAGE NEXT PAGE