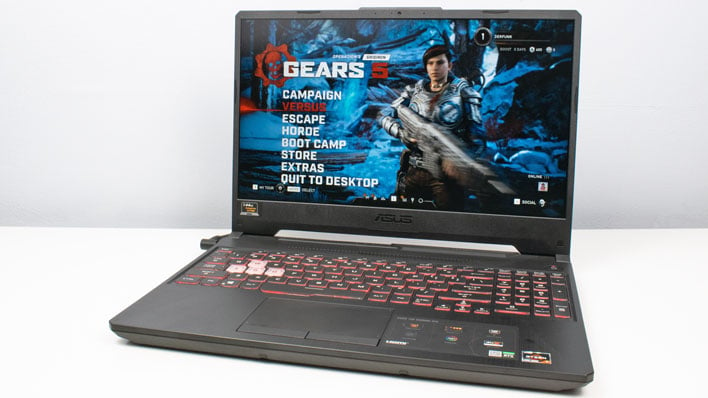 It's official: from what we've seen so far, AMD's Ryzen 4000 series of mobile APUs are a hit here in the HotHardware labs. It started with the svelte ASUS ROG Zephyrus G14 gaming notebook, which impressed us with excellent performance at a reasonable price point, all packed into a lightweight 2.7-pound 14" chassis. After that came the Dell G5 15 SE, which brought together Ryzen and Radeon in an exclusive (for now) combination with similarly excellent performance and an even lower, more entry-level starting price. Talk about a strong showing for AMD yet again, with both Ryzen 4000 and Radeon RX mobile technology as well. Ryzen and Radeon are on a roll.

The Dell G5 15 SE in particular left us pretty stoked, as our test unit rang in at just $1,200, and if you want to step down the ladder a bit with the Ryzen 5 4600H, those gaming notebooks can be had for less than $900. The value here is excellent, and of course Dell isn't the only manufacturer with a budget-friendly,  AMD-powered gaming laptop on offer these days. ASUS's TUF Gaming A15 was right around the corner with the same Ryzen 4000 processors backed by NVIDIA's Turing-based GeForce RTX graphics chips. Today we're going to take a closer look at the top of the A15 lineup which bears the model number TUF506IV. 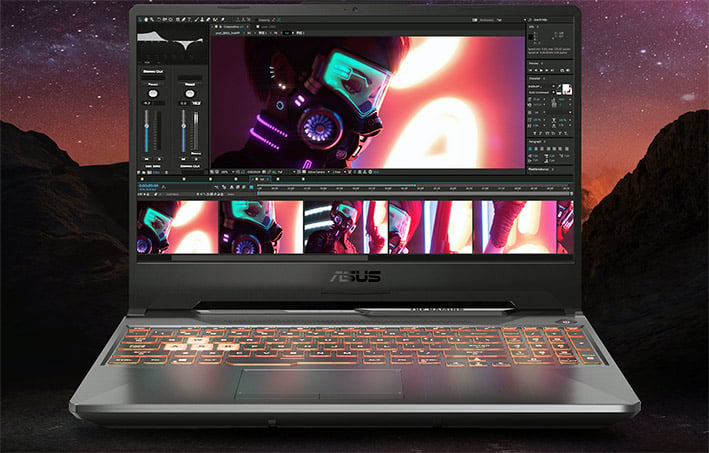 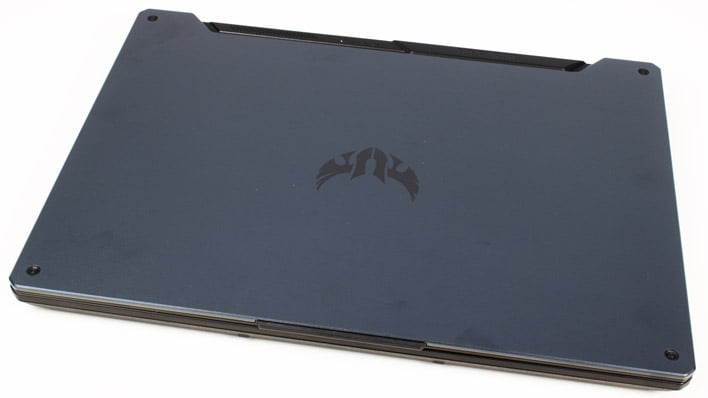 As we mentioned above, the heart of the TUF Gaming A15 is AMD's Ryzen 7 4800H. AMD's Ryzen 7 4800H mobile processor has eight cores and 16 logical processing threads with a base clock speed of 2.9 GHz and a maximum boost speed of 4.2 GHz, backed by 8 MB of L3 cache. This CPU has already proven to be quite formidable in previous tests, and we expect the same here. The lower-end configurations step down to a Ryzen 5 4600H, which is a six core chip with 12 threads, but should still be plenty speedy for gaming workloads.

The system we tested is also configured with 16 GB of dual-channel DDR4-3200 memory, which users can upgrade down the road via standard SODIMM slots. ASUS also notes that the TUF Gaming A15 can handle up to 32 GB of memory, once DDR4-3200 SO-DIMMs start to become a little more common. For primary storage, our review unit has a 1 TB NVMe SSD, though at the bottom of the range there's a 5400-RPM hard drive. Since there's an M.2 slot in all configurations, an SSD is the first upgrade we'd recommend on a base configuration, as spinning hard drives will negatively impact responsiveness and application loading, as well as potential long term reliability. The higher-end configs like we have sport a pair of M.2 slots and ditch SATA all together.

To hit a wide variety of price points, ASUS makes several NVIDIA GPUs available, starting with the GeForce GTX 1650 and topping out with the GeForce RTX 2060 refresh that NVIDIA announced just after the first of the year. Our review unit has the GeForce RTX 2060 (full fat, not Max-Q) with 6 GB of 192-bit GDDR6 VRAM, which means a world of RTX-enabled titles like Control, MechWarrior 5, and the Minecraft RTX beta will feature those tasty ray traced visual effects, and that hardware raytracing is a notable selling feature. In terms of rasterized rendering, this GPU is going to be on-par or a slight step up over the G5 15 SE's Radeon RX 5600M that we tested recently, depending on how the TUF Gaming A15 handles thermals. More on this later. 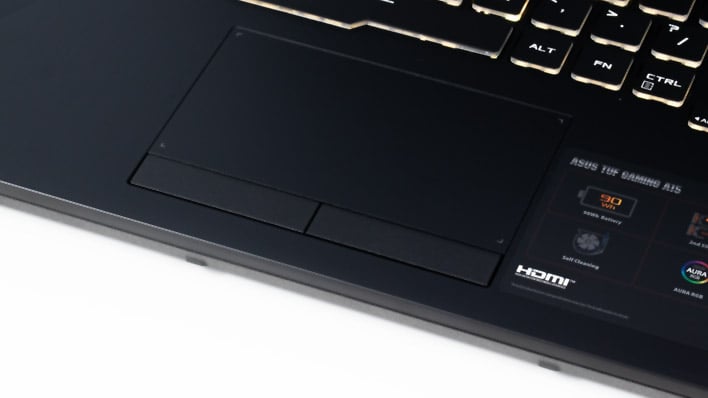 For networking, the TUF Gaming A15 has a Realtek 802.11ac Wi-Fi module with Bluetooth 5.0 with a 2x2 MIMO antenna array. It'd be nice to see 802.11ax Wi-Fi 6 here for future-proofing purposes (especially since the CPU and GPU are strong) but this wireless networking solution should be plenty for most users right now. Those who favor wired networks can plug into the Realtek Gigabit Ethernet controller as well.

While so many gaming laptops are just not built for long battery life, at least having a battery on a flight or in a coffee shop means it's not a brick when it's not plugged in. To that end, ASUS includes a 48 Watt-hour battery standard, which should be enough for some unplugged productivity. Higher-end models of this machine, however, swap in a 90 Wh battery. ASUS says that the bigger battery is good for up to 12.3 hours of video playback. Our review unit has that big juice box, so we're eager to see how long it's usable in both our video playback and gaming tests. Despite that huge battery, the TUF Gaming A15 weighs in at just over 5.1 pounds on our scales.

The ASUS TUF Gaming A15 comes in Fortress Gray or Bonfire Black. Our review unit is of the Fortress Gray variety, which has a nice slate gray polycarbonate lid. The entire body has a matte finish, and the palm rest has a brushed texture that looks like aluminum (but isn't) which ASUS says will repel fingerprints. Around the back of the A15, the display hinges sit on either side of a pair of wide vents that push plenty of warm air out the back of the machine. The Bonfire Black finish trades out the gray lid for black, and adds a red accent around the edge of the display. 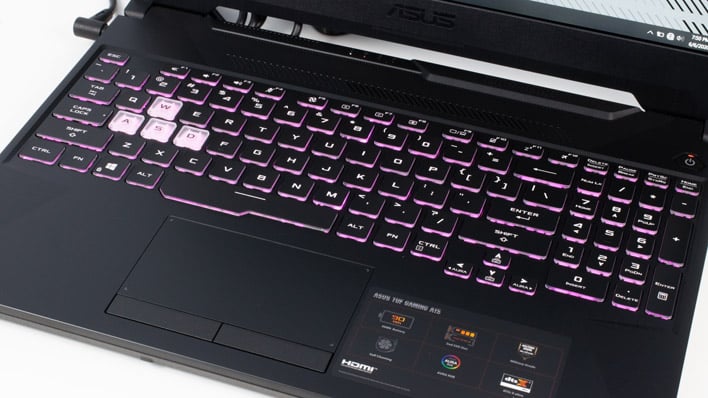 Because this is a gaming laptop, RGB accoutrements light up the keyboard. Unlike the Dell G5 15 SE, which had a four-zone backlighting system, the TUF Gaming A15 can only glow one color at a time. ASUS included its Aura RGB software to control the lighting, and the keyboard even shows up as an RGB device in Corsair's iCUE software. That means our M65 Elite RGB mouse and Void Pro headset can glow and pulsate in sync with the PC's lights. Beyond the RGB lighting, the keyboard is pretty solid. There's a fair amount of travel and good tactility in the keys, so the machine is comfortable to type on.

The rest of the body outside the palm rest and lid are a matte black, and the underside of the unit has a grippy, almost rubber feel to it. The bottom panel is adorned with with a hexagon pattern that matches the internal "honeycomb" reinforcements. ASUS' documentation says that the system meets the MIL-STD-810F standard, which includes withstanding falls, high altitudes, 95% relative humidity, and vibration. When a product has TUF in the name, it should withstand a harsh environment, and it seems ASUS made sure the A15 was up to the task without making it look garish. 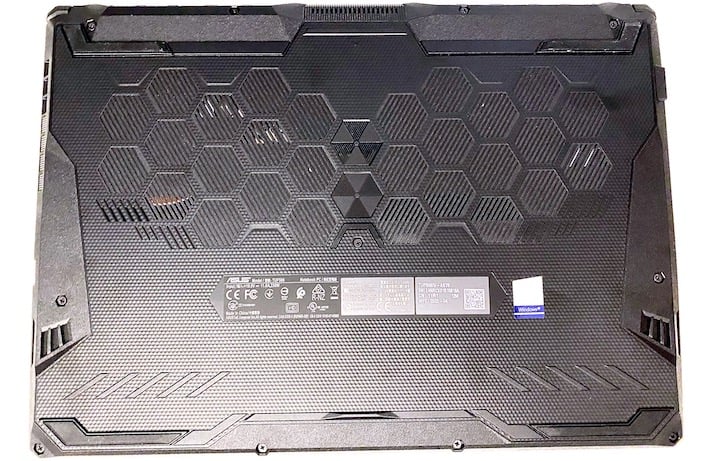 Below the keyboard is a blast from the past: a touch pad with actual hardware buttons. If you're stuck gaming without a real mouse, this might be a better option than pads with integrated buttons, but we'd much rather game with the right hardware. The touch pad surface is around 3.5" wide and 2" tall, so it's really meant for just navigating in Windows 10, but it supports gestures like two-finger scrolling and swipe multitasking.

In our humble opinion, the best thing about PC gaming is high refresh rate displays with variable-rate refresh capability. That means that when the performance is available, games can run at faster the 60 Hz max supported by most consoles, and that rendering will be jitter and tear-free. ASUS came through with the TUF Gaming A15, since it has a 144 Hz IPS-level 1080p display with 45% NTSC reproduction and NVIDIA G-Sync compatibility via Adaptive Sync. That color gamut may not look impressive, but viewing angles are great, colors are uniform, and it was fine in normal use but we wouldn't recommend it for color-critical work. Our test unit had a maximum measured brightness of 315 nits, which should be bright enough for indoor viewing but challenged perhaps in bright outdoor settings. There is also a 60 Hz model available, but that's tied to lower-end hardware configurations. 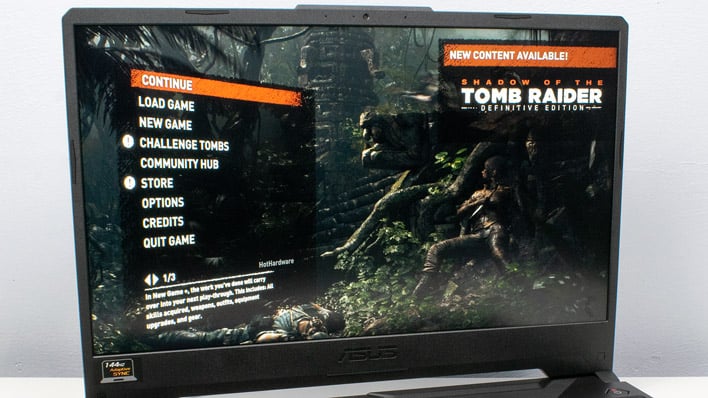 For audio and video input, the A15 has an integrated 720p webcam in the top bezel and a noise-canceling microphone array. The camera is definitely sufficient for video conferencing, and callers on the other end of our test Skype calls said we sounded clean and clear. For audio output, ASUS equipped the A15 with a four-speaker setup that features DTS X Ultra certification. ASUS says there's more bass than previous generations of the machine, but there's not a ton of bass output here, which is typical of just about any laptop. On the other hand, this puppy gets loud. Even at 25% volume, it's plenty to hear louder scenes in Gears 5 over the fans, and by the time we hit 50% it was almost a little uncomfortable, but audio was never distorted. For those who want quality over quantity, there's the usual headset jack for analog headsets with integrated microphones.

Most of the TUF Gaming A15's ports are on its left side. On that side we find a pair of USB 3.2 Gen 1 Type-A ports, a USB 3.2 Gen 2 Type-C port, HDMI 2.0b output, the headset jack, and the barrel connector for the 230W power supply. The Type-C port carries both USB and DisplayPort alternate mode, so just about everything outside of Thunderbolt 3 will work with it. The market isn't exactly flooded with Thunderbolt 3 devices aimed at gamers anyway. Of course, since USB Power Delivery is limited to 100W, that explains the barrel connector. 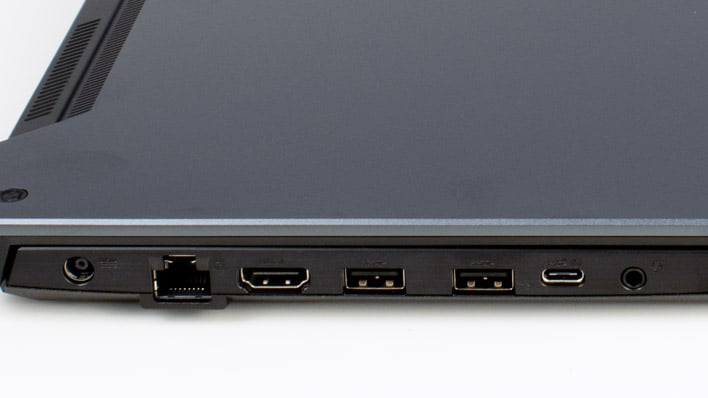 Around the right side is a single USB 2.0 port, which is just as puzzling here as it was on the G5 15 SE, but at least it's just one port this time. There's also a vent on both sides of the laptop which push hot air out the sides. That's not exactly comfortable while gaming here in late May and early June in the Midwest, but the heat has got to go somewhere.