We used the Moto One 5G on AT&T’s low-band 5G network (850MHz, n5) in San Francisco, CA and in Columbia, SC, and we didn’t experience any issues with call quality or data speeds. Obviously, Verizon’s model will support mmWave 5G, but that’s all we know since this version isn’t available yet. Conversely, T-Mobile’s slightly detuned REVVL 5G is optimized for the carrier’s low band 5G network (600MHz, n71). 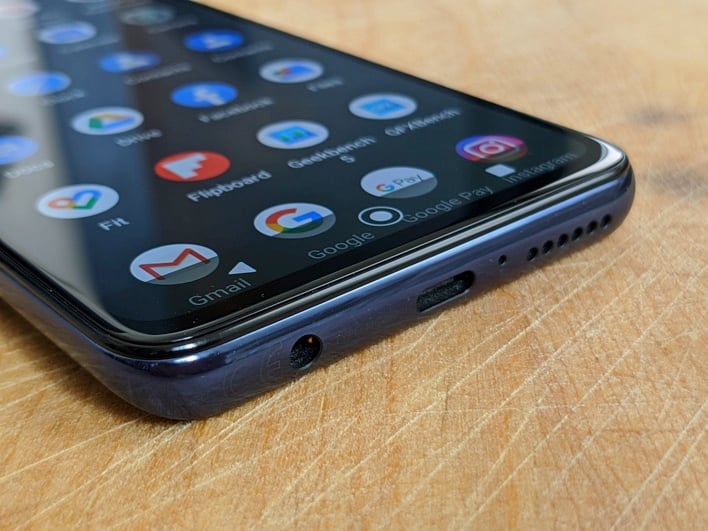 The One 5G only has a mono speaker, which is surprising when even some of Moto’s sub-$270 G-series phones offer stereo speakers -- and outstanding ones, at that. Basically, it’s fine for the occasional YouTube video, but that’s about it. Fortunately, there’s also a headphone jack, and while the amp isn’t really designed to drive high-impedance cans at high volume, the DAC sounds decent enough.

We’ve already reviewed some handsets with Qualcomm’s Snapdragon 765G (including the OnePlus Nord and LG Velvet), but the Moto One 5G is a Snapdragon 765-equipped device, meaning it’s not graphics optimized. Moto paired this chip with just 4GB of RAM, which isn’t really enough to run Android 10 without apps getting killed in the background. At least it comes with 128GB of storage (UFS 2.1) plus microSD support.

The One 5G is reasonably fast, but you won’t mistake it for the OnePlus Nord. Even Google’s Pixel 4a feels quicker. Still, everything is pretty smooth thanks to that 90Hz display. We occasionally noticed brief pauses, but nothing annoying. Overall, The One 5G didn’t have any trouble handling our usual complement of apps. As you can see from our benchmarks (below), this isn’t a phone for gamers, but most folks will be satisfied. 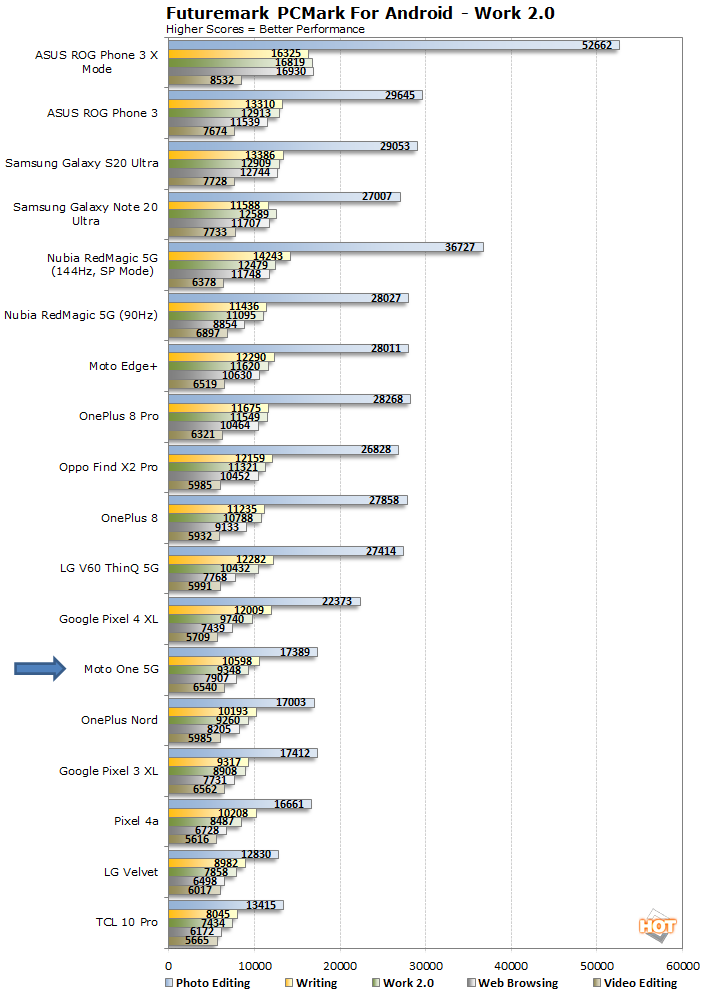 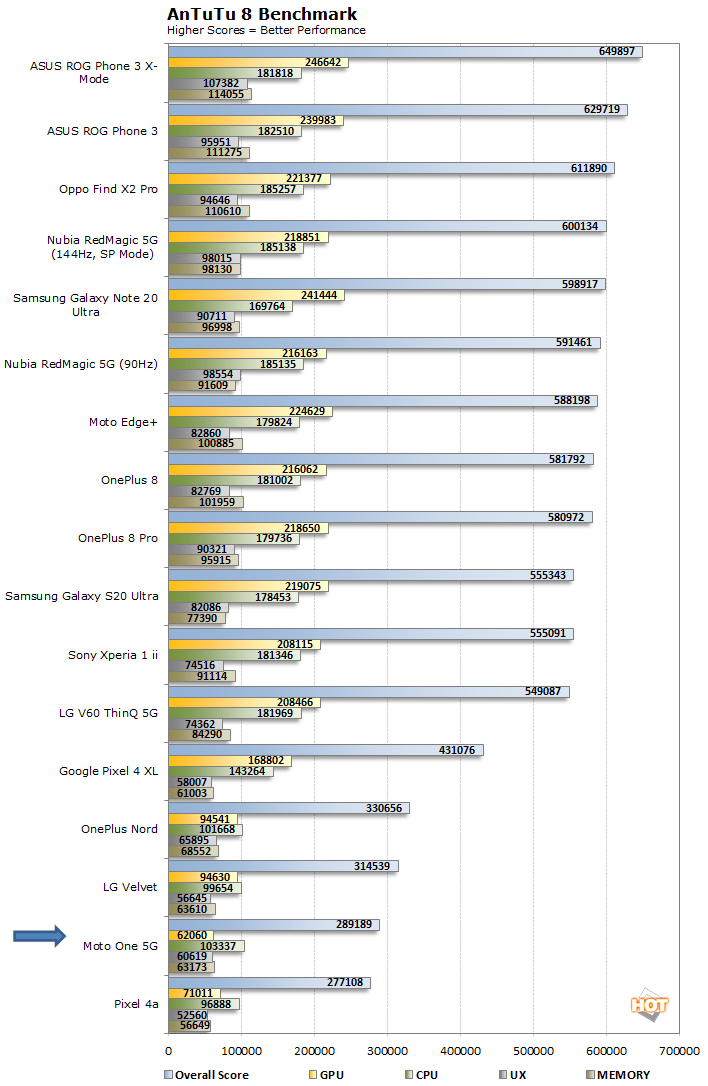 Normally we have an AiTuTu result here. AITuTu evaluates the AI performance of a device by leveraging two mainstream neural network models for machine learning and AI -- Inception v3 for Image Classification and MobileNet-SSD for Object Detection. The benchmark determines the device’s accuracy and speed when inferring data from each workload.
Unfortunately, while we were able to start AITuTu on the Moto One 5G, it just kept hanging while loading just before starting the image classification test. The One 5G remained responsive, but AITuTu never completed. We tried both the latest APK from AnTuTu and an older known working APK without luck.


Next we're checking how the Moto One 5G compares in GFXBench, which has been one of the standard mobile graphics/gaming performance benchmarks for years. To ensure that display refresh (v-sync) and resolution aren't limiting factors, we're comparing off-screen test results here. GFXBench tests OpenGL ES graphics workloads and we're specifically testing OpenGL ES 2... 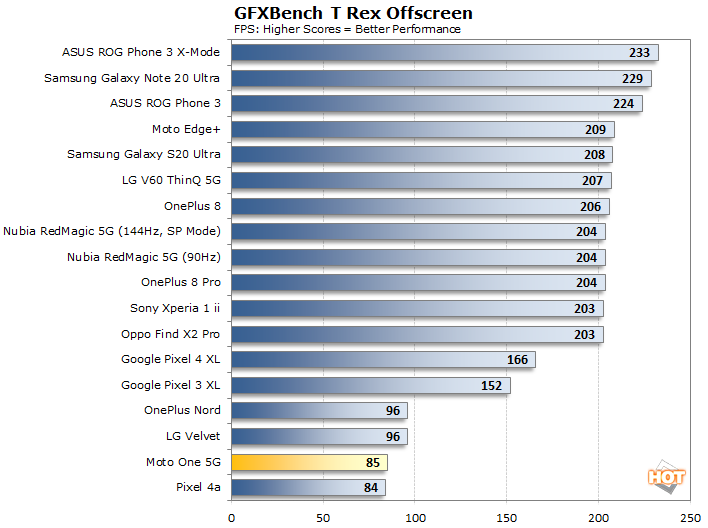 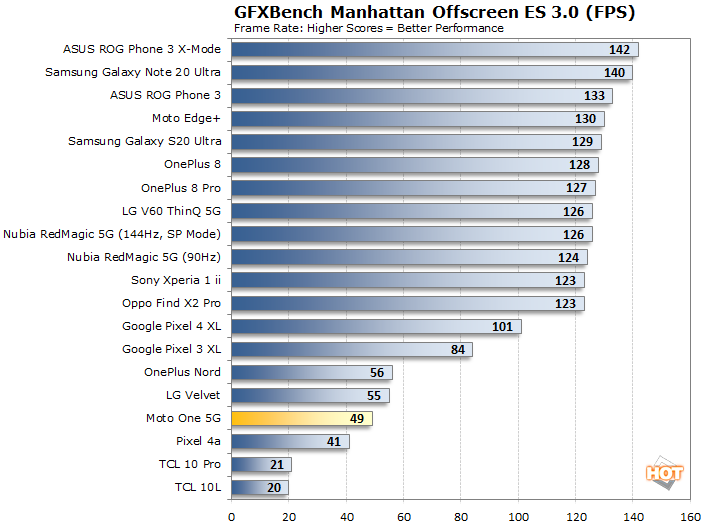 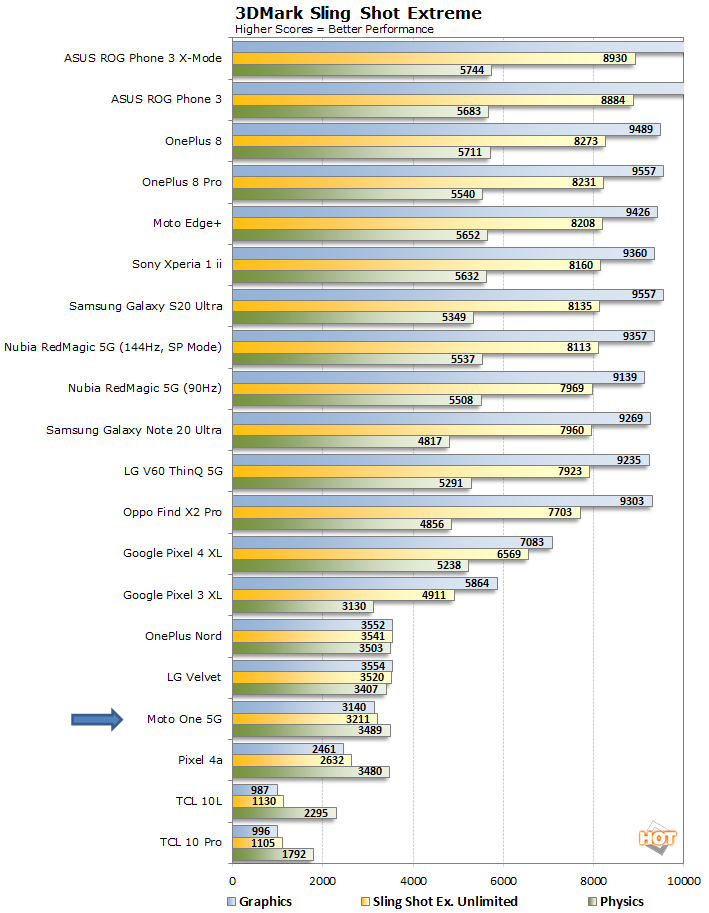 Obviously, the Moto One 5G also performed worse than current flagships in these 3DMark tests. It scored close to the Snapdragon 765G-equipped LG Velvet and OnePlus Nord, and about 1.2x better than the Snapdragon 730G-equipped Pixel 4a.

Moto One 5G Other Features and Battery Life

Other specs of the Moto One 5G include WiFi 5 (802.11ac), Bluetooth 5.1 (LE), NFC, and A-GPS/GLONASS/Galileo, plus the usual collection of sensors (accelerometer, gyroscope, proximity, ambient light, and compass). The side-mounted capacitive fingerprint sensor is fast and reliable -- a nice change from the finicky in-display fingerprint sensors found on some flagships. Haptics are fine, but the vibration motor feels a little weak. 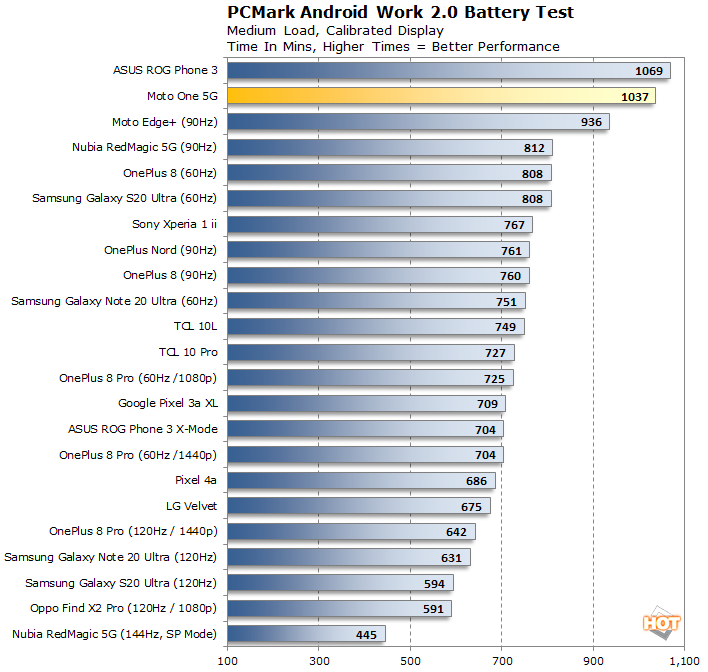 Battery life is definitely the One 5G’s secret weapon. In fact, it’s phenomenal. We didn’t have any problems stretching a single charge over two days with this handset. The 5000mAh cell lasted a full 17 hours and 17 minutes at 90Hz in our PCMark battery test -- that’s very impressive. Charging maxes out at 15W (USB PD), which is a bit slow these days, and Moto supplies a 20W charger in the box. Sadly, there’s no wireless charging.
Next up: the software, pricing, and the verdict...