With four shooters around the back, and two in the front, the Moto One 5G doesn’t skimp on lens count. And while the specs are decent on paper, imaging has never been Moto’s forte. Plus you have to ask yourself what corners have been cut to reach that impressive $445 price tag. Well, for one, there’s no OIS here, which is disappointing but not really surprising. After all, even the Moto Edge -- the company’s premium mid-ranger -- lacks OIS. 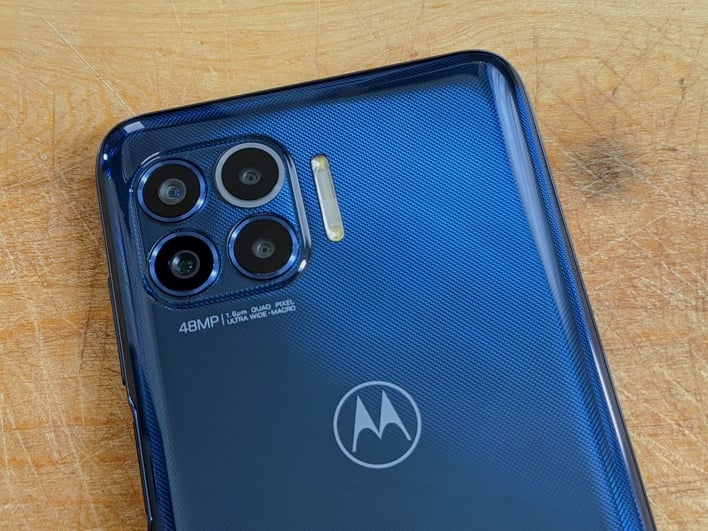 Both main shooters (front and back) use pixel binning to combine clusters of four pixels into larger “superpixels” for better low-light performance. As such, the 48MP rear shooter outputs 12MP with 1.6-micron pixels, and the 16MP selfie camera takes 4MP pictures with 2.0-micron pixels by default. Unlike most phones with 48MP sensors, the One 5G doesn’t include a 48MP shooting mode. It does allow 16MP selfies, though.
On the video front, the One 5G records up to 4k 30fps and 1080p 60fps with the main shooter, and tops out at 1080p 30fps with the ultrawide, macro, and selfie cameras -- all stabilized. Audio is captured in stereo. Shooting modes include portrait, night, panorama, macro, slow motion (1080p 120fps or 720p 240fps), and time lapse -- plus a few fun options commonly found on Moto handsets, like cutout, spot color, and cinemagraph.

Unfortunately, night mode is only available on the main shooters (front and back), which limits the low-light viability of the ultrawide cameras. The 5MP macro is available for both photo and video capture. It features autofocus and a light ring which, when enabled, eliminates shadows cast by the phone. This is a much better setup than those popular but useless fixed-focus 2MP macro lenses -- hello there, OnePlus.

The resulting photos are a mixed bag. Sure, the One 5G occasionally takes nice pictures, but overall, colors are muted and details are lacking. We’re pretty sure this handset uses Samsung’s inferior GM1 48MP sensor -- instead of Sony’s excellent IMX 586/582 -- and it shows. This is the same sensor that often produced underwhelming shots on the TCL 10L. Add Moto’s lackluster image processing to the mix, and here we are.

Low light stills are relatively noisey, and night mode images are over-sharpened and artificial looking. Zooming anywhere beyond 2-3x quickly results in “oil painting”-like artifacts. The macro fares better than most thanks to AF and that light ring, but it sometimes struggles to focus properly. At least portrait mode works quite well. It’s available on the main shooter (via the depth sensor) and both selfie cameras (via face detection).

Speaking of selfies, the currently selected lens is highlighted by a pulsing ring around its punch hole, which is pretty neat. Video performance is adequate, but nothing special. In all, we’re not saying the One 5G shooters are terrible -- just don’t expect them to live up to the competition. Maybe you’re okay with this, but it is disappointing to us. After all, imaging is one of the core pillars of the smartphone experience, and we'd like to see Moto step up its game.

[Some of our sample photos were taken while traveling. While we realize this isn’t ideal right now, it was unavoidable. Know that we always take precautions like wearing masks and doing social distancing when testing phones - Ed.]