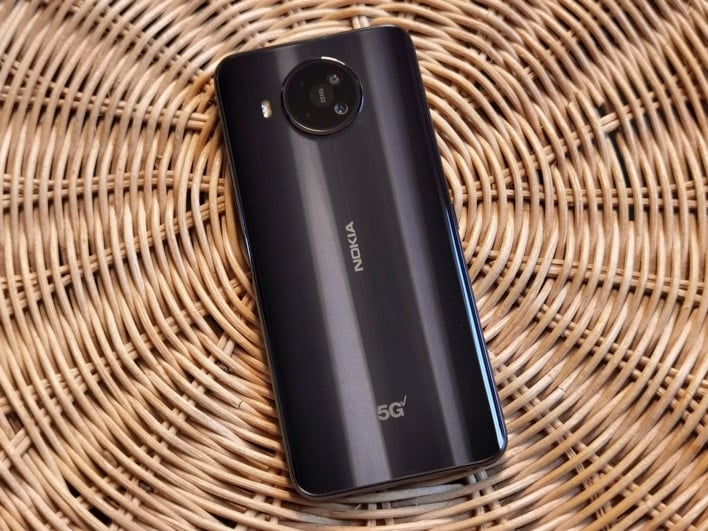 The Nokia 8 V 5G UW is a relatively expensive mid-range phone from a storied brand that’s been trying to make a comeback into the US market. Essentially, it is Verizon’s mmWave 5G version of the global Nokia 8.3 5G, a Snapdragon 765G-based handset that was announced back in March but shipped in September -- by which time it had to contend with some stiff competition. This is our quick-take review of this new option from Nokia in the US.


At 171.9 x 78.6 x 9mm and 230g -- and with a large 6.81-inch screen -- the Nokia 8 V (for short) is a big and heavier phone. It feels substantial but looks pretty generic. Its build quality is high, but while the rear is shimmery glass, the mid-frame is glossy plastic -- which seems out-of-place for a $700 handset. It’s available in just one color (Meteor Gray), but two things stand out: its substantial (10mm) chin below the display, and its Zeiss-branded rear camera pod.

This circular bump is significant but attractive, and incorporates a 64MP main shooter, 12MP ultrawide, 2MP macro lens, and 2MP depth sensor. It’s flanked by a dual LED flash, and the back panel also includes Nokia branding and Verizon’s obnoxious 5G logo. In front, the 6.81-inch 1080p IPS screen features a punch hole in the top left corner for the 24MP selfie camera, and thick bezels by today’s standard (not to mention that prominent chin). 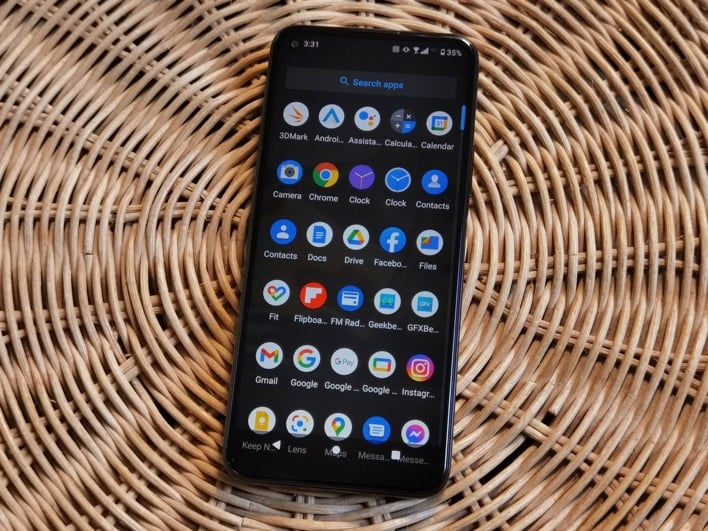 You’ll find the SIM / microSD tray, volume rocker, and power / lock key (which doubles as a capacitive fingerprint sensor) on the right side. The bottom is home to a headphone jack, primary mic, USB Type-C port, and mono speaker. A Google Assistant button is located on the left edge, and a secondary mic along the top. There’s a generous 4500mAh battery under the rear glass, but no wireless charging or IP rating for water resistance.


Here's our unboxing video before we continue...

The Nokia 8 V packs a 6.81-inch FHD+ (2400 x 1080 pixels, 386ppi) “PureDisplay” IPS panel with a 20:9 aspect ratio and 60Hz refresh rate. It’s powered by a chip from Pixelworks, that enables always-on HDR. While the punch hole in the top left corner looks modern, the obvious bezels and chin feel out of place. The screen struggles with brightness, especially in direct sunlight. Overall, it’s just no match for the OLED panels on most phones in this price range. 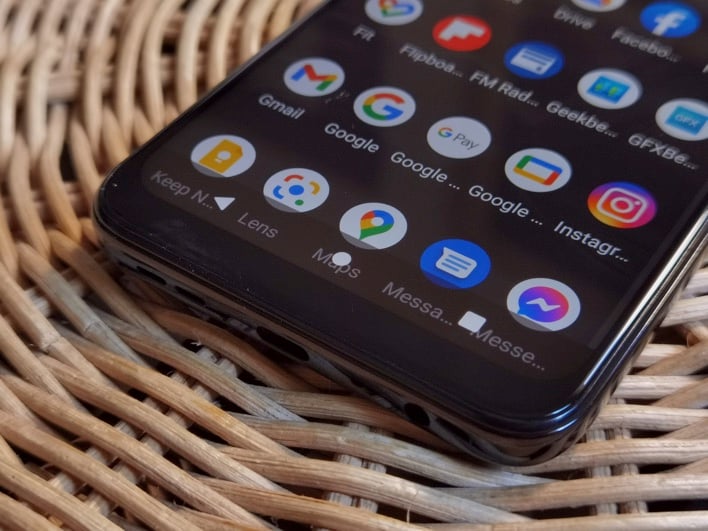 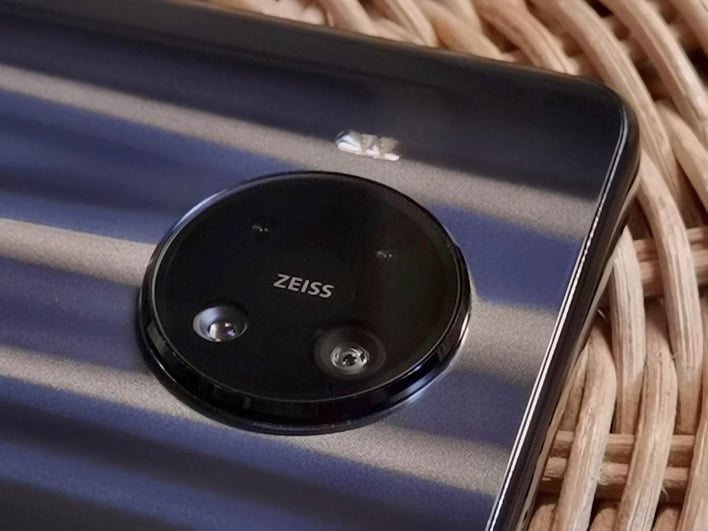 The obvious miss here is the lack of OIS on the main shooter, and the lack of AF on the macro lens. Interestingly, the ultrawide (which has a 16:9 sensor) features autofocus -- making the dedicated fixed-focus macro even more redundant. Video is captured at up to 4k 30fps in the rear, and 2k 60fps in the front -- stabilized, with stereo audio. There’s also a super stable “action” mode (1080p 30fps), and macro video mode (1600x900).

If watermarking pictures is your thing, the Nokia 8 V packs some interesting settings beyond the standard “Shot on Nokia”. We have a couple niggles with the camera interface, though. The digital zoom resets to 1x as soon you switch to another app, and there’s no quick way to select 2x zoom other than pinching the screen until you reach the desired magnification (the macro button is where the 2x button is found on other handsets).


Both the main and selfie cameras benefit from 4-to-1 pixel binning -- outputting 16MP and 6MP images, respectively. The resulting photos and videos are acceptable, as long as you don’t mind muted colors and lower contrast. Zoomed shots are oversharpened, and often underexposed. Low light photos are okay, and night mode helps, especially on the main shooter. Selfies are decent, but macro shots are poor on account of the 2MP fixed-focus lens.

In addition to 4G LTE, the Nokia 8 V supports both sub-6GHz (band n5, 850MHz) and mmWave 5G for Verizon. Obviously, when you can find it -- like here in San Francisco -- mmWave 5G is insanely fast. While the earpiece sounds loud and clear for calls, its mono speaker distorts at anything beyond 3/4 volume when listening to music. At least the headphone jack delivers clean audio, and this handset features aptX HD over Bluetooth. 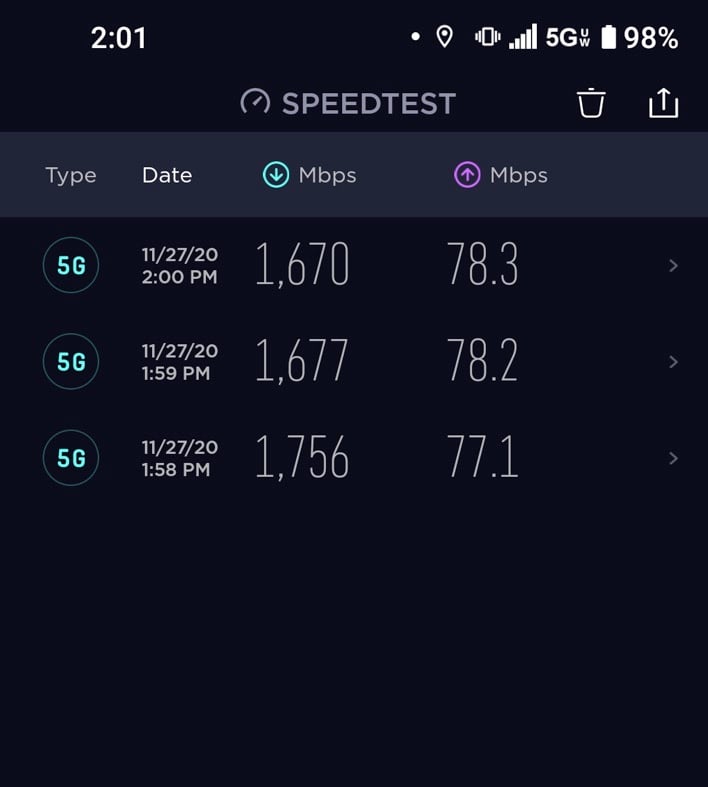 As you’d expect, the Nokia 8 V’s performance matches other Snapdragon 765G phones we’ve reviewed. This is no surprise considering how uniform benchmark results have been across these devices. It’s pleasantly responsive no matter what you’re doing -- from productivity to entertainment to gaming. Nokia’s clean build of Android definitely helps here, but the lack of high-refresh rate is noticeable if you’re already used to it.

The Nokia 8 V pairs Qualcomm’s speedy Snapdragon 765G with 6GB of RAM and 64GB of storage, plus microSD support up to 1TB. While 6GB of RAM is mostly fine (it’s the bare minimum required to run Android smoothly these days), 64GB of storage is just stingy for this phone's price point. Other specs include CAT18 LTE, WiFi 5 (802.11ac), Bluetooth 5.0 (LE), NFC, A-GPS/ GLONASS / BeiDou, and the standard roster of sensors. 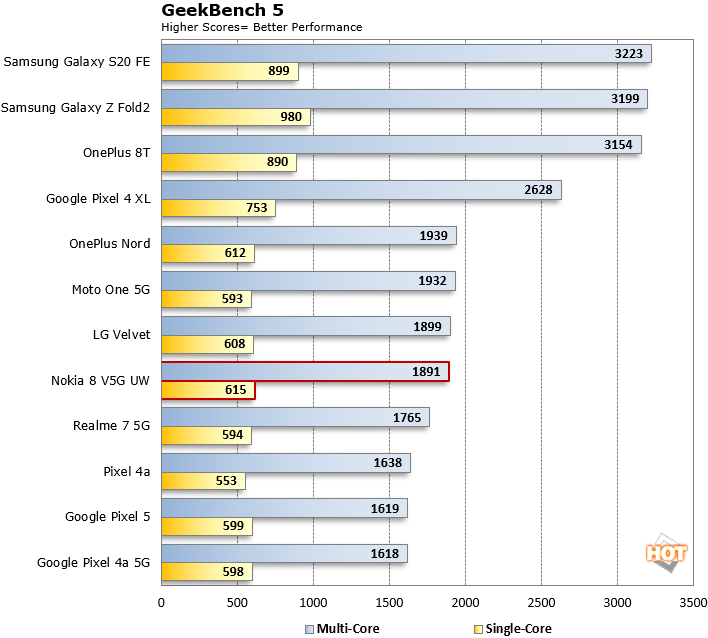 Battery life with the Nokia 8 V 5G UW is solid. Obviously, combining a Snapdragon 765G with a 4500mAh power plant and a 60Hz display results in a very efficient device. We typically saw screen-on times of about 7 hours on a full charge, leaving us with 20% to spare after a busy day. Unfortunately, the Nokia 8 V only includes 18W fast charging and lacks wireless charging. On the biometric side of things, at least this phone's capacitive fingerprint sensor is quick and reliable.

The Nokia 8 V runs a pretty clean build of Android 10. As a bonus, Nokia is promising two OS updates, plus security updates for 18 months. That’s great news -- as long as Verizon’s also on board. Everything is where it’s supposed to be, and we basically have no complaints here, other than the bloatware. Predictably, the Nokia 8 V comes with a dozen useless pre-installed apps from Verizon and others, some of which can only be disabled. 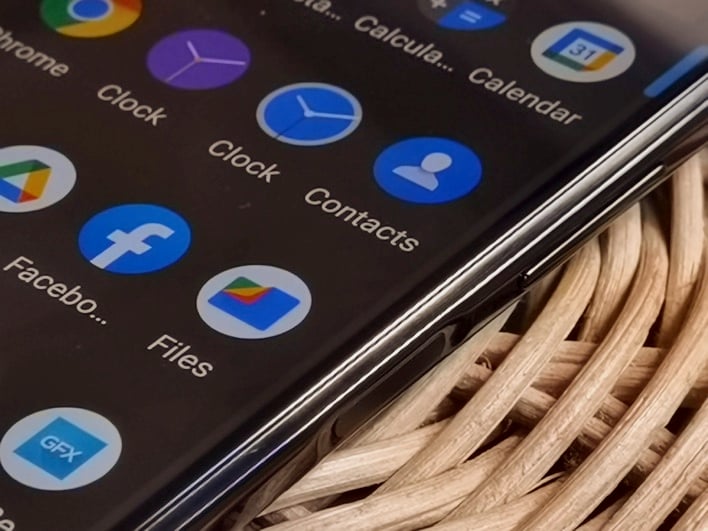 While the Nokia 8 V isn’t a bad phone per se, there are better options in its $700 price range, or similarly equipped phones for less. This Nokia handset doesn’t really bring anything more to the table than the $400 TCL 10 5G UW or $450 Moto One 5G. Its design and build are nice enough (if not just a bit bulkier than you might expect), performance is good, battery life is excellent, and stock Android is always welcome. But its display is too dim (especially in the sun) and its camera configuration is a miss -- which is uncharacteristic for Nokia. 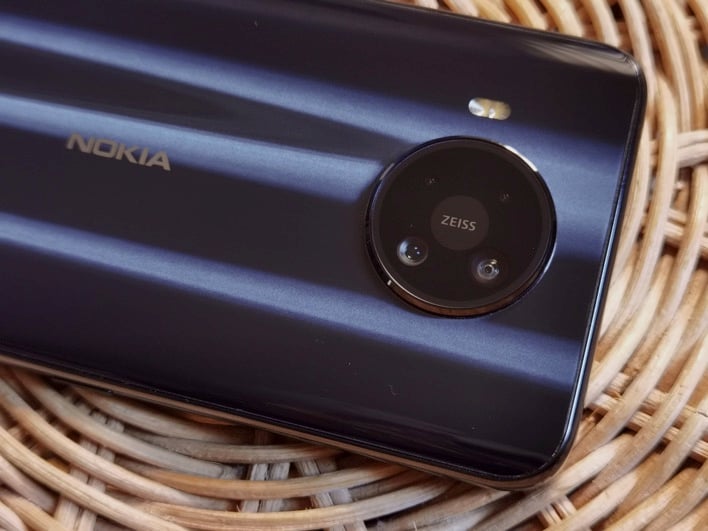 Ultimately, we can’t recommend the Nokia 8 V. It just delivers too little bang for the buck. $700 buys you Google’s Pixel 5 (also with mmWave 5G support), or Samsung’s Galaxy S20 SE (with a Snapdragon 865 and telephoto shooter). Both pack far better cameras (with OIS), wireless charging, and water resistance (IP68). We want Nokia to succeed, but for this to happen, it needs to step up and compete. Instead, this time, it stumbled.