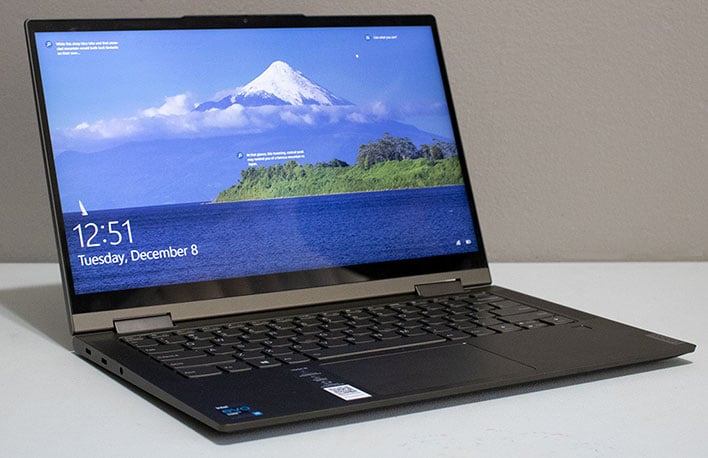 As time goes on, Intel's 10-nanometer Tiger Lake processors will pounce on more laptop designs, given that it has only been a handful of weeks since the chip maker launched its latest mobile CPUs (which replace Ice Lake). Lenovo was quick out of the gate, however, and the company sent us an interesting sub-$1,000 Tiger Lake configuration from its rather plentiful 2-in-1 lineup. Specifically, the Lenovo Yoga 7i that arrived on our doorstep, and it's a flexible 14-inch convertible which is also the first to land in our lab armed with an 11th Gen Core i5-1135G7 processor in tow.
Our dalliances with Intel's Tiger Lake platform up to this point have been encounters with higher end SKUs, including a Core i7-1185G7 we benchmarked as part of a reference laptop Intel provided shortly after its Architecture Day 2020 event, as well as the Core i7-1165G7 we cozied up to in our Dell XPS 13 review. Those are the two fastest Tiger Lake processors within the UP3-series (what Intel previously called its U-series) for thin and light laptops. 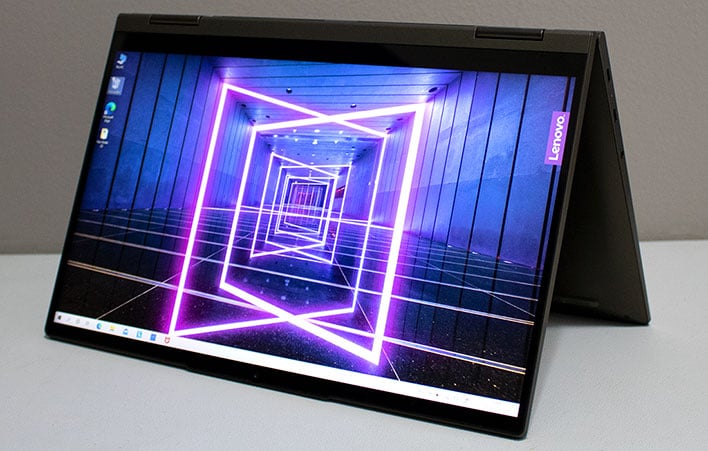 The Core i5-1135G7, meanwhile, sits a peg down and presents an opportunity to offer a less expensive laptop built around the same core CPU architecture. That is what makes the Yoga 7i so intriguing. It is still a Tiger Lake chip, and even harnesses the same number of cores (four) and threads (eight), just with less cache (8MB versus 12MB) and a tamer implementation of Intel's powerful new Xe graphics core (we'll get to that later).

Intel bills Tiger Lake as being the "world's best processor for thin and light laptops," and the Yoga 7i wraps it into a relatively affordable package starting at $749.99. The config we received runs $899.99 and appears to be a SKU specific to Best Buy, though it's also now on sale at that original $749 price point and makes for a great deal. Here's all that the machine includes... 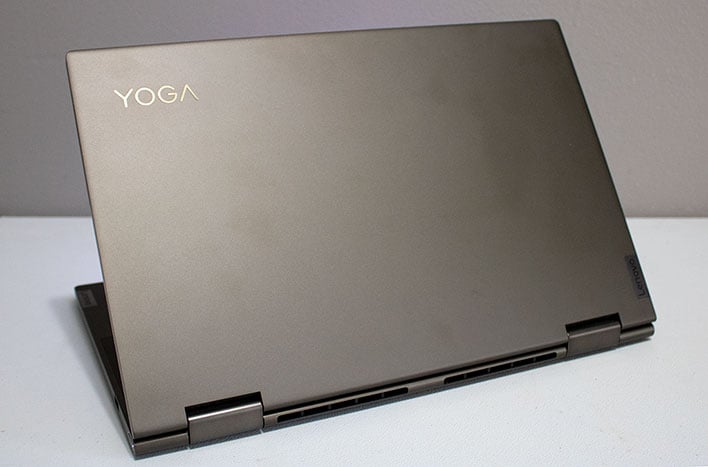 This machine's 4-core/8-thread Intel Core i5-1135G7 has a 2.4GHz base clock and 4.2GHz max turbo clock (3.8GHz for the all-core turbo clock ceiling). At the upper end of the single-core turbo frequency spectrum, there is a 500MHz difference between the Core i5-1135G7 and Core i7-1165G7, and a 600MHz difference between it and the Core i7-1185G7. That means there is an inevitable performance hit in certain applications, though as our benchmarks show on the next page, the divide is not always significant.
This particular SKU also has 12GB of DDR4-3200 memory soldered to the motherboard. It is a bit of an oddball capacity, versus more commonly found 8GB and 16GB arrangements. But we suppose splitting the difference allows Lenovo to elevate this setup above the baseline amount while still keeping the price attractive for budget-conscious buyers looking to spend well under $1K. And for storage, this Yoga comes with a 512GB NVMe SSD, which is also a jump over the baseline amount (256GB) on the Yoga 7i series. For all intents and purposes, this is a decidedly upper mid-range config at a very reasonable price point.

All of these components, and especially the Tiger Lake CPU, play into this laptop's Intel Evo certification. To be Evo certified, a laptop has to meet certain criteria specified by Intel, including...
Intel anticipates certifying nearly two dozen designs by the end of the year, of which the Yoga 7i is one of them. Second-edition target specifications laid out by Intel also added Thunderbolt 4 and Wi-Fi 6 connectivity to the Evo recipe, both of which are featured on the Yoga 7i as well. So again, for about $750 - $840 at retail currently, you're getting a lot of leading-edge technology here.

Lenovo Yoga 7i Design And Display

One of the common drawbacks to more affordable laptop designs, are that they often lack the premium build quality and feel of more expensive models, a lot of times with plastic construction. They also tend to be a little thicker. Lenovo's Yoga 7i is a welcome exception to this not-so-hard and fast rule. It looks and feels more expensive than it is, with its sandblasted aluminum housing and mostly rigid build quality. For example, you can flex its display panel if you really try, but it takes considerably more force than many laptops in this price range. 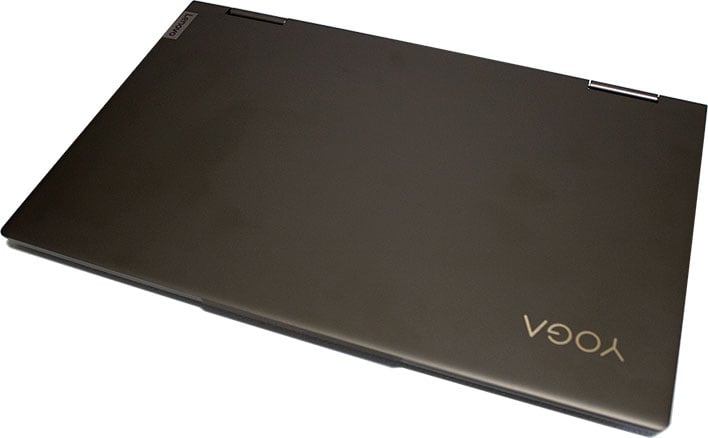 It is rather attractive as well, in its simplicity. There are no artificially carved lines or extraneous pieces of flair (like RGB or single-color lighting), just a flat rectangle design with beveled corners, a single color finish, and a relatively thin waistline (0.69 inches at its thickest point) with slightly tapered geometry. There is some light branding, though it is subtle as well, consisting of the Lenovo name in one of the corners (atop a small brushed metal section), and "Yoga" carved a bit bigger in the opposite corner. Both blend in nicely with the finish here.

We received the "Dark Moss" color option, which appears dark gray with tones of green, depending on the lighting. Dark Moss does not sound all that appealing, quite frankly, but to this editor's eyeballs, it is a nice and subtle deviation from the standard silver, black, white, and gray color options that dominate the laptop landscape. Speaking of which, the Yoga 7i is also offered in "Slate Gray" for those who prefer that traditional, somewhat comparatively boring color. 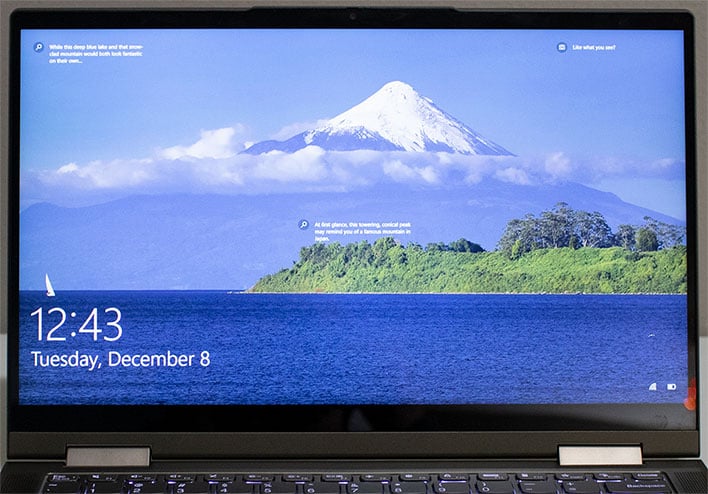 The display is a 14-inch screen with a 1920x1080 resolution, with touch support. If offers 72 percent coverage of the NTSC color space, and is easily viewed from wider, off-access angles, which carries added importance for 2-in-1 devices capable of flexible form factors. Photos and videos look good on the Yoga 7i, though if you have been spoiled by an OLED panel, you are not going to get the same image quality here. In its own right, though, the display on the Yoga 7i is suitable for a variety of tasks.

This display is not ultra-bright, though. Specifically, we measured around 315 lux at the maximum brightness setting. That is enough for a vibrant presentation, though far away from an daylight defying luminosity. On a related note, HDR reproduction is absent on this laptop's display.

One of the main reasons to buy a Yoga 7i is for its flexibility, and that comes by way of Lenovo's sturdy 360-degree hinges. This means you can use it in four different ways: as a traditional laptop, in tent mode to play a presentation or perhaps watch content in the kitchen, in stand mode (where the keyboard is the base), or fold it all the way back to use it as a tablet. Windows 10 of course adapts and orients the screen appropriately automatically. 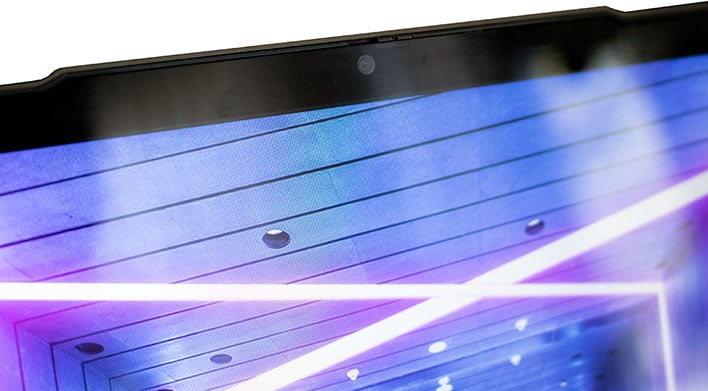 One feature that could easily go overlooked if you do not know it is there, is the privacy shutter for the built-in webcam. The Yoga 7i is equipped with a 720p HD webcam positioned at the top of the display, and there is an inconspicuous slider scrunched in the hairline gap between the bezel and edge of the panel. It is fairly easy to slide with even short fingernails, and offers peace of mind that the camera cannot expose anything you do not want it to (so long as you remember to close the shutter). And it is certainly more elegant than draping a piece of tape over the camera sensor. 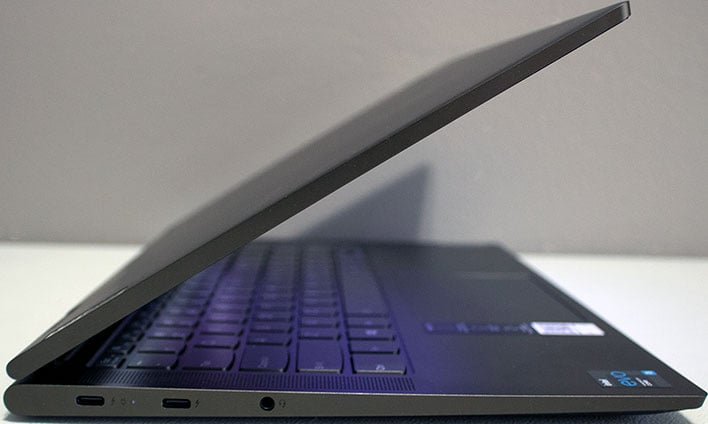 Lenovo Yoga 7i Ports - Left Side

The port selection is a little limited on this 14-inch laptop, however. With this Yoga model, Lenovo has taken the opportunity to nudge users into the land of USB-C/Thunderbolt 4 connectivity—you will find two of those ports on the left side, either of which can charge the laptop with the include power adapter, along with a 3.5mm headphone/microphone combo jack. 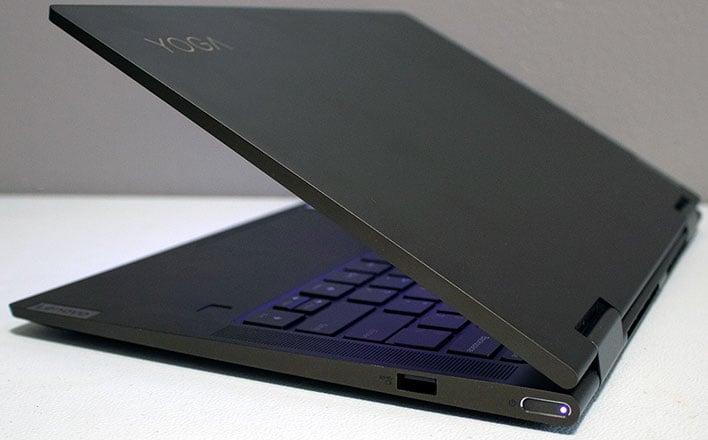 Lenovo Yoga 7i Ports - Right Side

On the other side of the Yoga 7i is a single USB 3.2 Gen 1 Type-A port. This is basically a USB 3.0 port with the updated jargon, meaning the maximum theoretical bandwidth is 5Gbps (whereas Gen 2 goes to 10Gbps, and Gen 2x2 goes to 20Gbps). It is a bit of a bummer that Lenovo opted for the slower version, though in lieu of added speed, it is a power share port, so connected devices can still draw power even when the laptop is shut down.
The Yoga 7i's six-row keyboard is distinctly Lenovo, to an extent. Its key caps have a curved bottom instead of a more rectangular shape, but this really amounts to an aesthetic choice, not so much an ergonomic one. They are not slightly concave or quite as comfortable as the keys found on Lenovo's ThinkPad laptops, which we feel are best in class for ultralight machines. 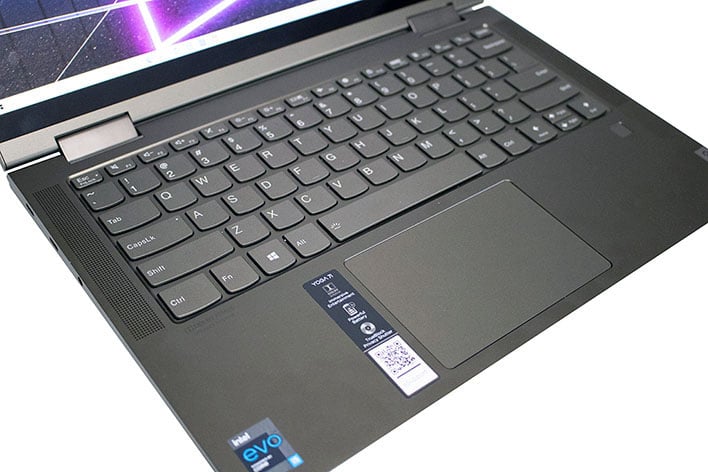 In contrast, the keys on the Yoga 7i are flatter (lower profile) and a bit softer. They are serviceable, though, with consistent key action and good spacing, without feeling cramped on a 14-inch form factor. There is also an LED backlight with two levels of brightness.
Underneath the keyboard is a fingerprint reader on the right side, and a precision 10-point multi-touch trackpad slightly off center to the left. It is smooth and responsive, and gave us no issues during testing.
A pair of 2W speakers flank the keyboard, and pump out some decent volume. We fired up AC/DC's new Power Up album, and the Yoga 7i did a good job filling the room with the raspy vocals and electric guitar riffs. Disabling Dolby Atmos actually results in even more volume, albeit at the expense of some of the audio tuning and EQ controls.
As is usually the case, lower end bass response is mostly absent, and the overall sound quality is not going to make you chuck your reference speakers or fancy earbuds. But it is another area where the Yoga 7i punches a little above its price point. 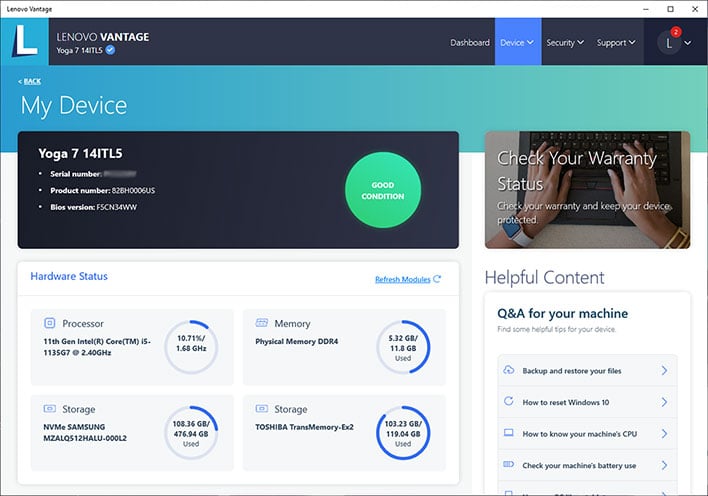 The pre-installed Lenovo Vantage utility is your hub to a variety of resources and maintenance, like looking up driver updates, viewing your warranty details, and other housekeeping. It is broken up into four sections—Dashboard, Device, Security, and Support—each with their own sub-sections, and you will want to spend some time getting familiar with the layout.
One area in particular is the Device > Power section. While not exactly intuitive (it took us a bit to figure this out), this is where you can adjust the "Power Smart" settings to balance noise and cooling with performance. Your options are Extreme Performance (configured by default), Intelligent cooling, and Battery saving. 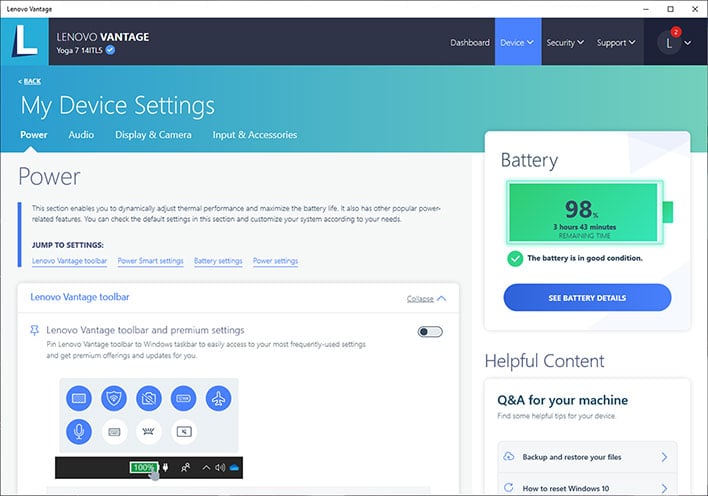 Here is how these settings are explained...
This utility is also where you can enable/disable things like Rapid Charge, Always-on USB, and more.
With our introduction to the Yoga 7i out of the way, let's hop over to the benchmarks to see how it performs...