LG Wing: Enabling New Use Cases With A Swiveling Screen 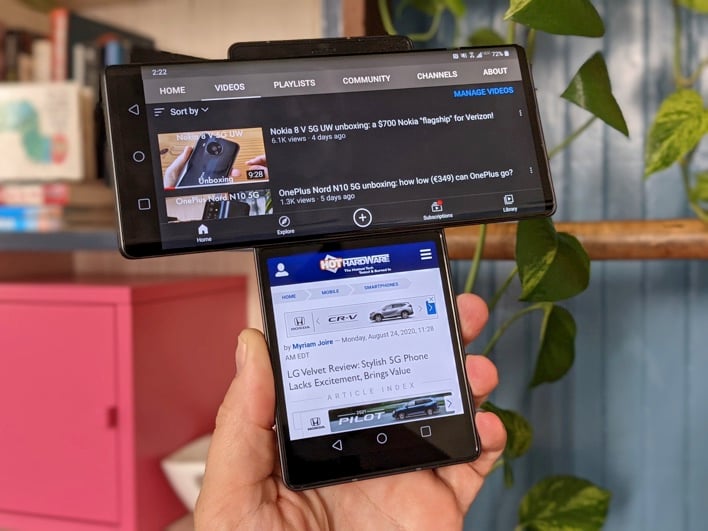 LG is a bit like that quiet loner in high school -- often misunderstood, but sometimes brilliant. Take the company’s 2020 smartphone lineup for example. At the top, it consists of the $700+ LG V60 ThinQ 5G, a competent affordable flagship, and the $600+ LG Velvet, a stylish premium mid-ranger. These are good phones by any measure, but they’re often outclassed by the competition, and don't have many stand-out features -- optional dual-screen case aside. Which brings us to the $1000 LG Wing, the first handset born from the company’s Explorer Project.

The LG Wing's main display can swivel 90 degrees to reveal another (half) display, transforming from a normal phone into a T-shaped, multi-display device. Obviously, it’s super cool, but is it actually useful? We’ve been using Verizon’s version of the Wing with mmWave 5G support for about a month now, and we have formed some opinions...

At first glance, the LG Wing has a lot in common with the mid-range LG Velvet, with a similar overall design language and similar specs. At 169.5 x 74.5 x 10.9mm, it’s almost the same footprint, too -- just 3mm thicker. Obviously, this is a big phone, but it’s also quite heavy, weighing in at a portly 260g. The Wing borrows its rear shooters (main and ultrawide) from LG's V60 flagship, and its camera pod aesthetic from Samsung's Galaxy Note 20.

Still, other than the increased thickness and weight, the Wing looks and feels like any other premium flagship or mid-ranger -- until you swivel it open, that is. Push the bottom right edge of the 6.8-inch P-OLED screen, and the display rotates up and away in one smooth spring loaded and hydraulically dampened maneuver, resting 90-degrees across the top half of the phone, and revealing another, 3.9-inch OLED display in the bottom half. 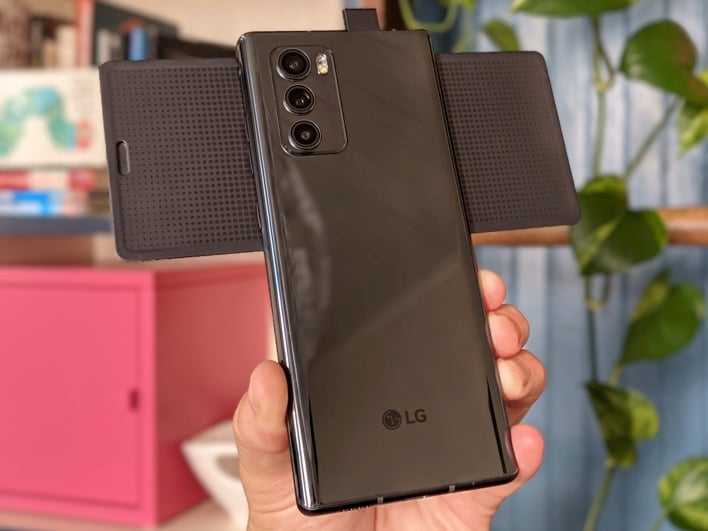 We can’t overstate the wow factor here. This mechanism is sublime, feeling both satisfyingly precise and bulletproof. You even have the option to pick open and close sound effects to match the smooth pivot action. The end result is a T-shaped device with three different modalities depending on how you hold it -- basic T for video playback while chatting, inverted T for gaming, and sideways T for driving, for example.

And if you want a regular phone experience, just swing the main screen back down. Since the earpiece is hidden behind the primary display when it’s stowed, LG added a physical conduit behind the P-OLED panel that channels sound to a slit located above the front glass. The back of the 6.8-inch screen is made of dimpled plastic that’s only visible when it's deployed. Everything else is pretty familiar.

Up front, the main display has mildly curved “waterfall” edges, no notch, narrow side bezels, and slightly wider top and bottom bezels. It also supports Wacom AES pens. The secondary screen is almost square and perfectly flat. Around the back, there’s a large rectangular camera pod in the top left corner that’s home to a trio of raised lenses with circular accents (64MP main, 13MP ultrawide, 12MP ultrawide) and a dual LED flash. 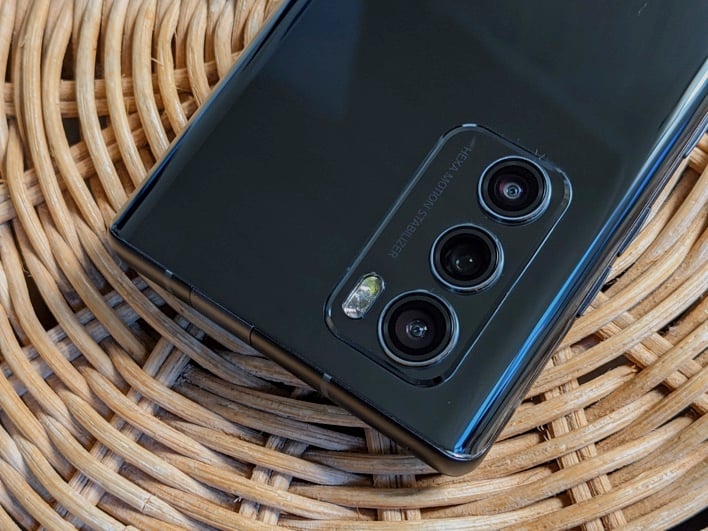 The Wing comes in two colors: Aurora Gray (like our review unit) and Illusion Sky. Other than the primary display surround, which is made of high-quality plastic, this is your typical aluminum and glass sandwich. And despite all the moving parts, it’s IP54 slash resistant, and even MIL-STD-810G compliant -- though it’s obviously not a rugged phone. It also features wireless charging, but lacks a headphone jack.

You’ll find a mono speaker, USB Type-C port, and primary mic along the bottom edge, and a 32MP motorized pop-up selfie camera and secondary mic on top. The SIM / microSD tray is located on the left side, and there’s a power/lock key and volume rocker on the right -- which are unfortunately somewhat difficult to reach once the main screen is deployed. Overall, though, the Wing’s design and build quality are top notch.


Here's our unboxing video before we dive in further... 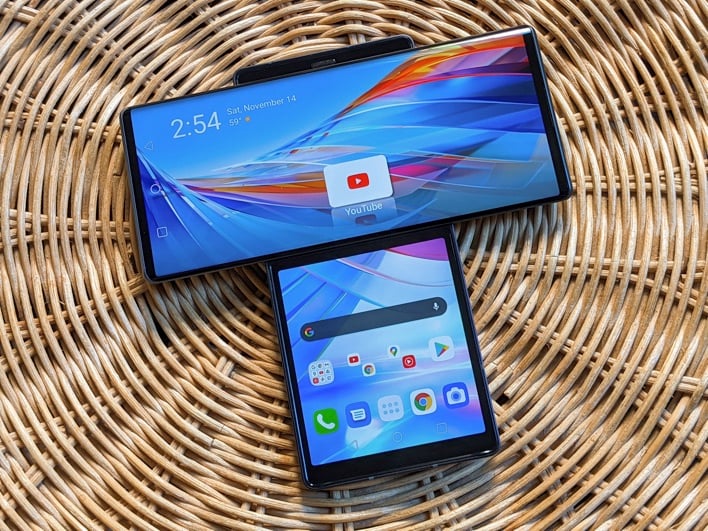 While the half screen is completely flat, it’s framed by significant bezels. These actually prevent accidental touches when gripping the Wing with the swivel open, which is smart. LG’s also done a great job calibrating both panels to match in color and brightness. Other than the lack of high refresh rate, we have no complaints here. These are gorgeous displays, with punchy colors, inky blacks, and excellent viewing angles.

As we mentioned above, the LG Wing basically inherits the LG V60’s 64MP f/1.8 0.8-micron main camera (with OIS) and 13MP f/1.9 1.0-micron 117-degree ultrawide, but not the ToF depth sensor. It also gains a second, 12MP f/2.2 1.4-micron 120-degree ultrawide that’s rotated 90-degrees to enable landscape video recording when the main screen is deployed and the phone is in gimbal mode -- one of its T-shaped modalities. 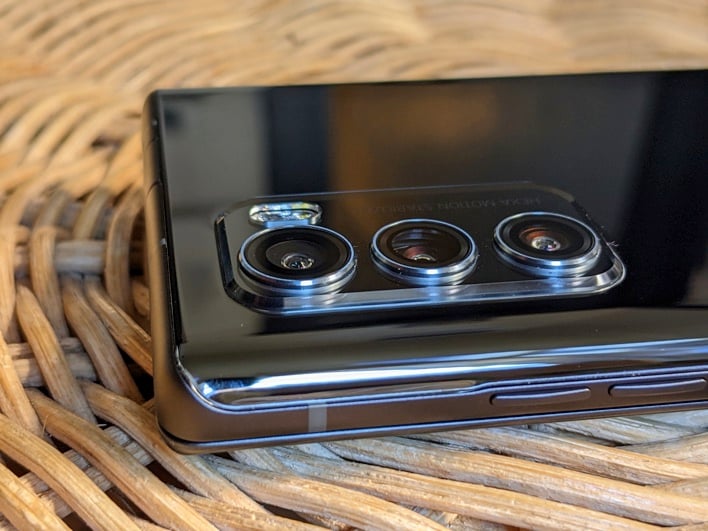 For selfies, the Wing features a 32MP f/1.9 0.8-micron motorized pop-up shooter. By default, the main and selfie sensors use pixel binning to improve low-light performance, combining groups of four 0.8-micron pixels into larger 1.6-micron pixels. This results in 16MP and 8MP images, respectively, but the Wing also includes native 64MP and 32MP shooting modes. Night mode is not supported on the selfie camera, though. 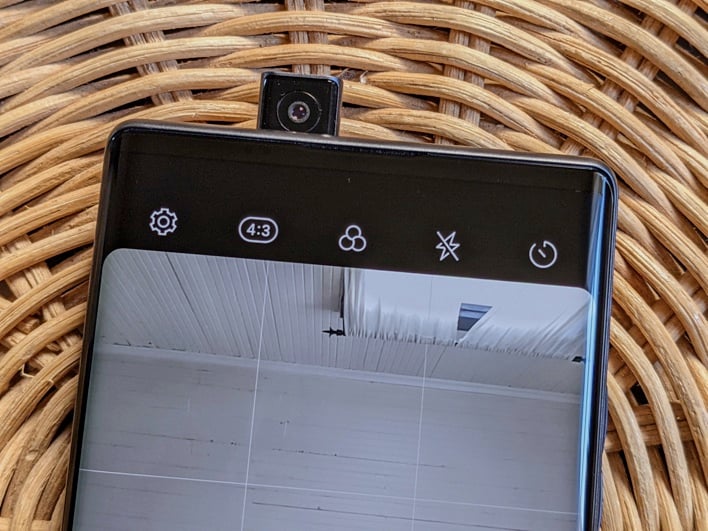 Despite similar hardware, the Wing lacks the V60’s portrait video mode. Other modes include portrait photo, 360 panorama, cinemagraph, manual photo, manual video, slow motion, time lapse, and AR stickers. Video recording maxes out at 4k 60fps with the main shooter, and 4k 30fps with the 13MP ultrawide and selfie cameras -- all stabilized. Audio is recorded in stereo, with options for ASMR and audio zoom.

Super steady mode is available on the main shooter, and tops off at 1080p 30fps. Basically, other than the lack of a dedicated telephoto lens, this is a solid camera system. It tops other Snapdragon 765G handsets (including the Velvet) and holds up against Snapdragon 865 flagships. The resulting pictures are lovely, with accurate colors and exposure, nice dynamic range, and good low-light performance.

Night mode doesn’t make a huge difference, but helps in extreme cases. Zooming is purely digital since there’s no dedicated telephoto shooter, and is fine up to 3-4x. Anything beyond that results in noticeable loss of detail and oil painting-like artifacts. Video capture is decent, and sound quality definitely remains one of LG’s strengths. And then there’s that second 12MP ultrawide and gimbal mode, which deserve a closer look.

The 12MP ultrawide only comes into play when the Wing is open, and the camera app is fired up. And frankly, it’s a great experience. This T-shaped modality turns the main screen on top (now in landscape orientation) into a viewfinder, and the smaller half display below into a control interface and grip. It also provides new shooting modes including: gimbal mode, dual recording, time lapse, and slow motion.

While time lapse and slow motion are identical to what the Wing offers when the primary screen is stowed, gimbal mode mimics mounting a regular smartphone on a gimbal grip. Unlike the Vivo X50 Pro / X51 5G, the Wing’s 12MP ultrawide shooter isn’t actually mounted on a motorized micro-gimbal. Everything’s done entirely in software by “moving” a 1080p/720p window within the 12MP sensor area.

The resulting experience is very similar to using a separate gimbal grip. Here, the secondary display features a virtual joystick -- complete with haptic feedback --  that lets you “pan” the camera around. You can switch between first person view, pan follow, and follow gimbal modes. There are even controls to recalibrate and lock the gimbal, plus audio options (standard, ASMR, and audio zoom).

Gimbal mode records super stable video at 1080p 30 fps or 720p 30fps and lets you take 9.1MP 16:9 stills -- even while capturing video -- thanks to a dedicated virtual shutter button. All that’s missing here is the ability to zoom, likely because that 1080p/720p “moving” window is already cropping the 12MP sensor. The resulting videos are fine overall, but don’t quite match the main or 13MP ultrawide cameras in terms of quality.

Finally, there’s dual recording, which captures video on both the 12MP ultrawide and selfie cameras at the same time. It lets you combine both videos into a single file (split screen or picture-in-picture) or record separate files (up to 1080p 30fps stabilized) which is handy for vlogging. In all, the additional 12MP ultrawide -- and the gimbal mode in particular -- really showcase the benefits of the Wing’s swivel design.