We tested the LG Wing on Verizon’s 4G LTE and mmWave 5G networks in and around San Francisco, and didn’t experience any issues. Calls sounded loud and clear, and 4G LTE data speeds matched other phones on the same network. Despite Verizon’s claims (see online map), we didn’t see any sub-6GHz 5G (band n5, 850MHz) in our area (Potrero Hill), but we did find mmWave 5G close by (Mission Bay). 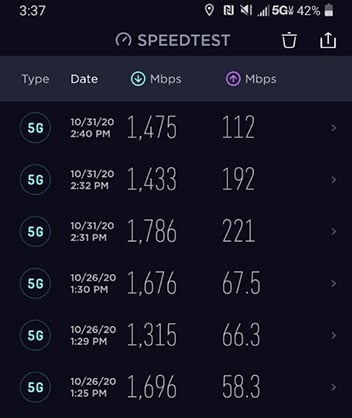 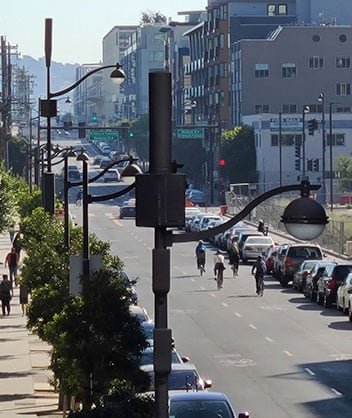 
And yeah, it’s crazy fast -- as long as you’re standing outdoors within line-of-sight (about 750 feet) of a cell site, that is. While the Wing checks every box when it comes to 5G networking, it lacks stereo speakers or a headphone jack. The mono speaker sounds decent enough, but doesn’t really stand out. At least there’s support for digital audio devices via USB Type-C, plus aptX HD lossless audio over Bluetooth.

When it comes to performance, the LG Wing closely matches the LG Velvet, and you can see this in our benchmarks. This makes sense, since both devices use Qualcomm’s Snapdragon 765G SoC. Here, it’s paired with 8GB RAM and 256GB of UFS 2.1 storage (128GB in some markets), plus microSD support up to 2TB. Basically, it’s as quick as other Snapdragon 765G phones we’ve reviewed, with the exception of the OnePlus Nord.

The Wing handled our usual suite of productivity apps without breaking a sweat. But while it’s responsive enough, there’s room for improvement -- the 60Hz refresh rate certainly doesn't feel as smooth as the 90/120Hz competition. Some of LG’s animations are slow, especially when deploying or stowing the main screen. Overall though, we have no complaints. This handset is speedy enough to satisfy most people. 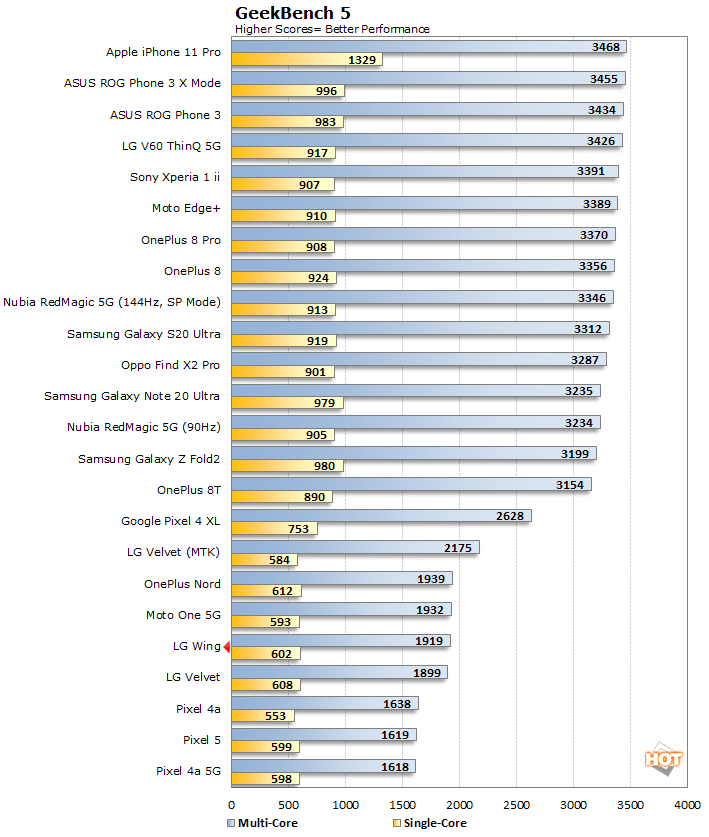 In these Geekbench 5 tests, the Wing finishes in the lower third. The iPhone 11 Pro still has the strongest single-core performance overall, but the Wing hangs with other Snapdragon 765G-equipped devices like the original OnePlus Nord and LG Velvet. 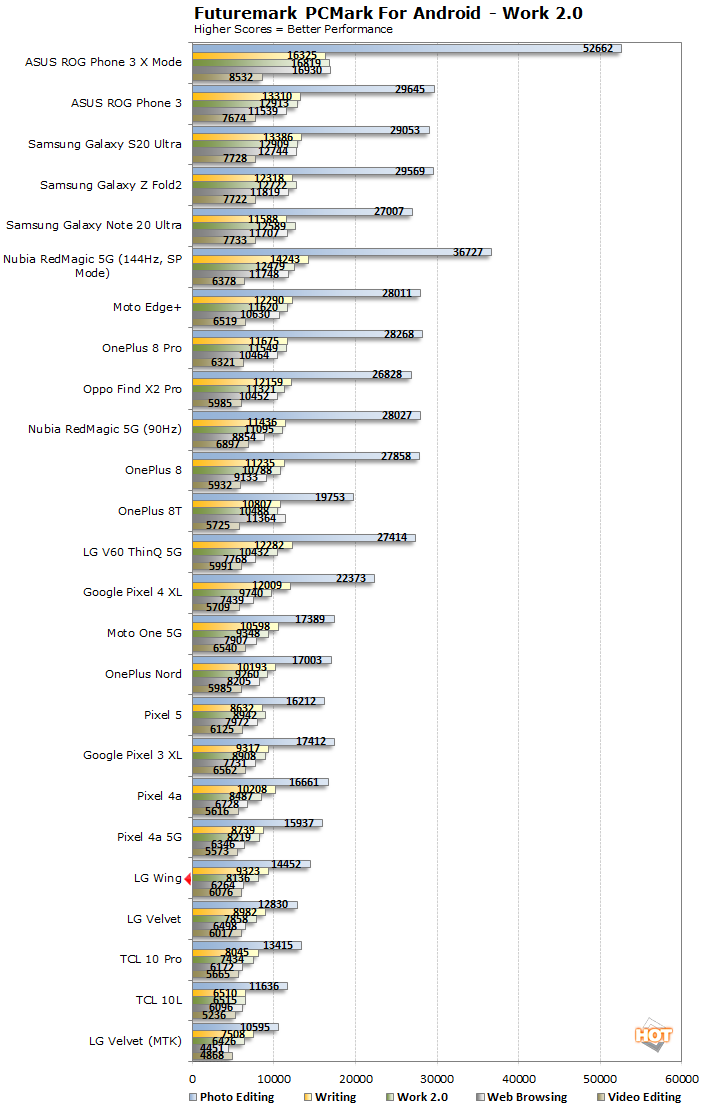 We were expecting the Wing to score close to the OnePlus Nord, but for some reason -- and like the Velvet -- it scores just below the Snapdragon 730G-equipped Pixel 4a. While the Snapdragon 765G powering the Wing clearly doesn't match the performance of current flagships for the workloads used in PCMark for Android, these results are still respectable.
AnTuTu’s latest benchmark returns a number of metrics ranked with somewhat nebulous scores, rather than frame rates or time to complete. Here we're running the latest version of AnTuTu across an multiple Android devices. AnTuTu returns four top level performance results which are all included here: CPU, RAM, 3D, UX (or User Experience), along with a total score... 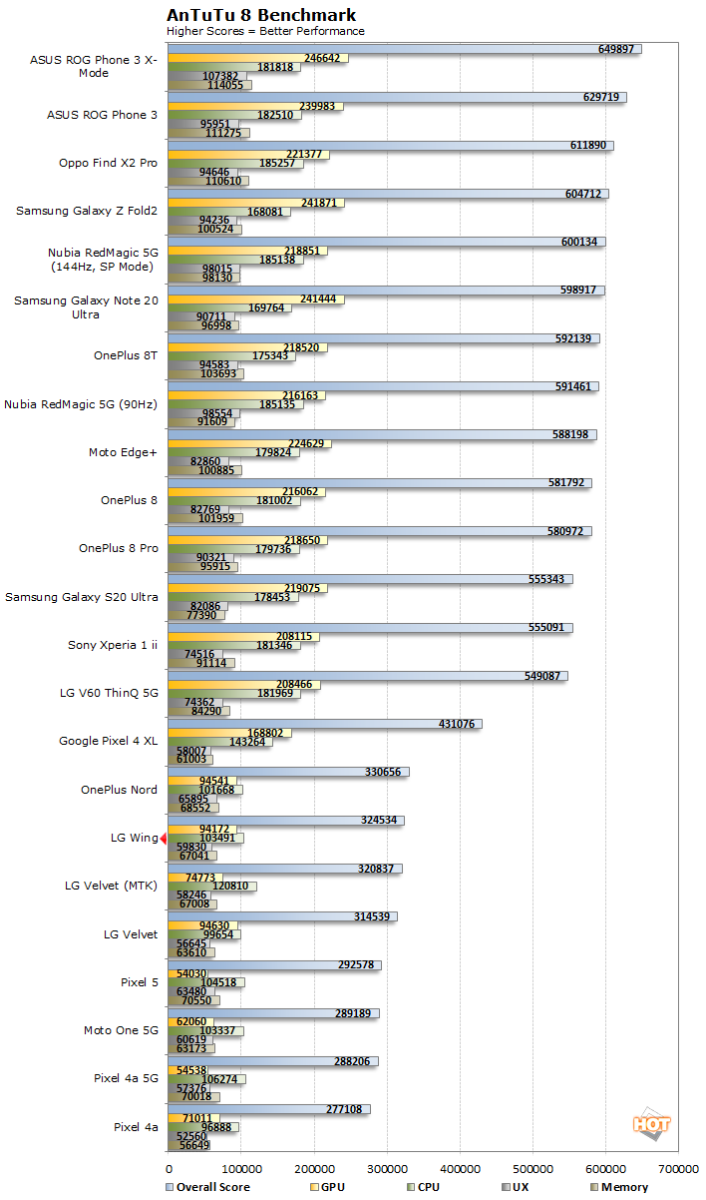 The Wing did better with the AnTuTu benchmark. Here, it slots right in-between the Pixel 5 and Velvet and the Snapdragon 765G-equipped OnePlus Nord. 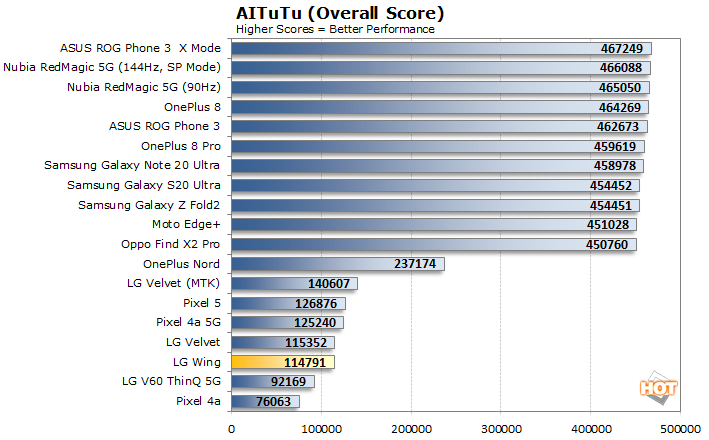 LG has clearly done a decent job optimizing AI workloads on the Snapdragon 765G. In AiTuTu, the Wing actually scores better than the Snapdragon 865-equipped LG V60. Strangely, that's less than half what the OnePlus Nord scores. LG likely hasn't implemented the necessary libraries to fully accelerate the workloads in AITuTu in dedicated hardware.

Next we're checking how the Wing compares in GFXBench, which has been one of the standard mobile graphics/gaming performance benchmarks for years. To ensure that display refresh (v-sync) and resolution aren't limiting factors, we're comparing off-screen test results here. GFXBench tests OpenGL ES graphics workloads and we're specifically testing OpenGL ES 3.0 and 2.0... 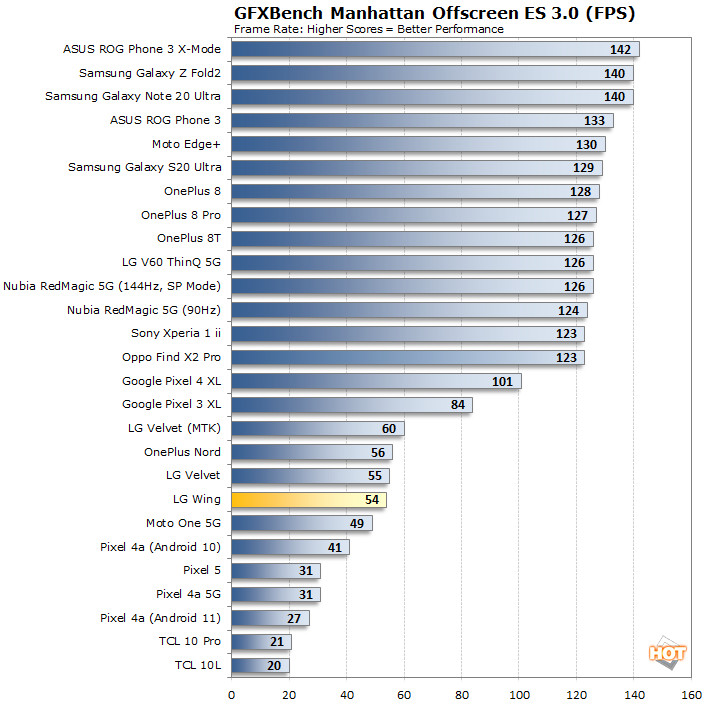 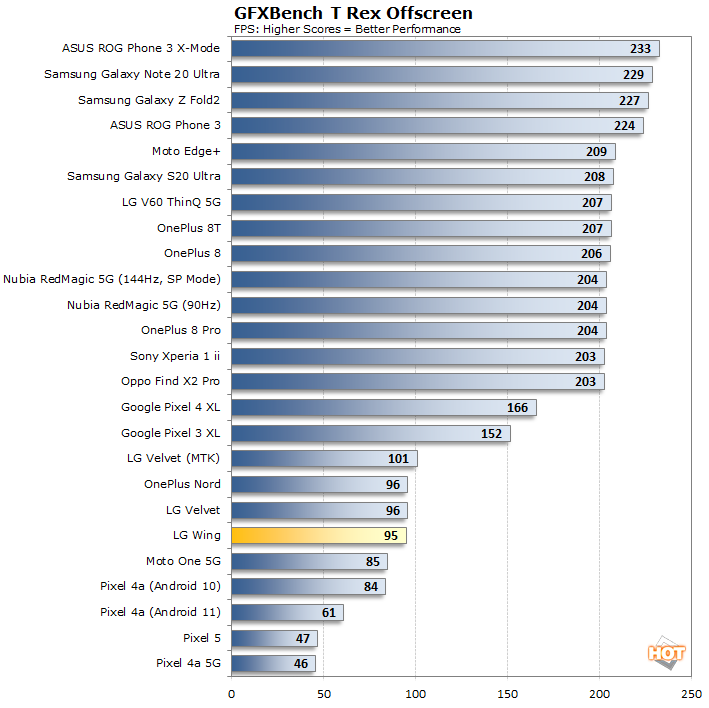 Graphics performance clearly isn't the Snapdragon 765G's strongest suit. Here, the Wing's scores are almost identical to the OnePlus Nord's and consistently slightly less than half the scores of current flagships. 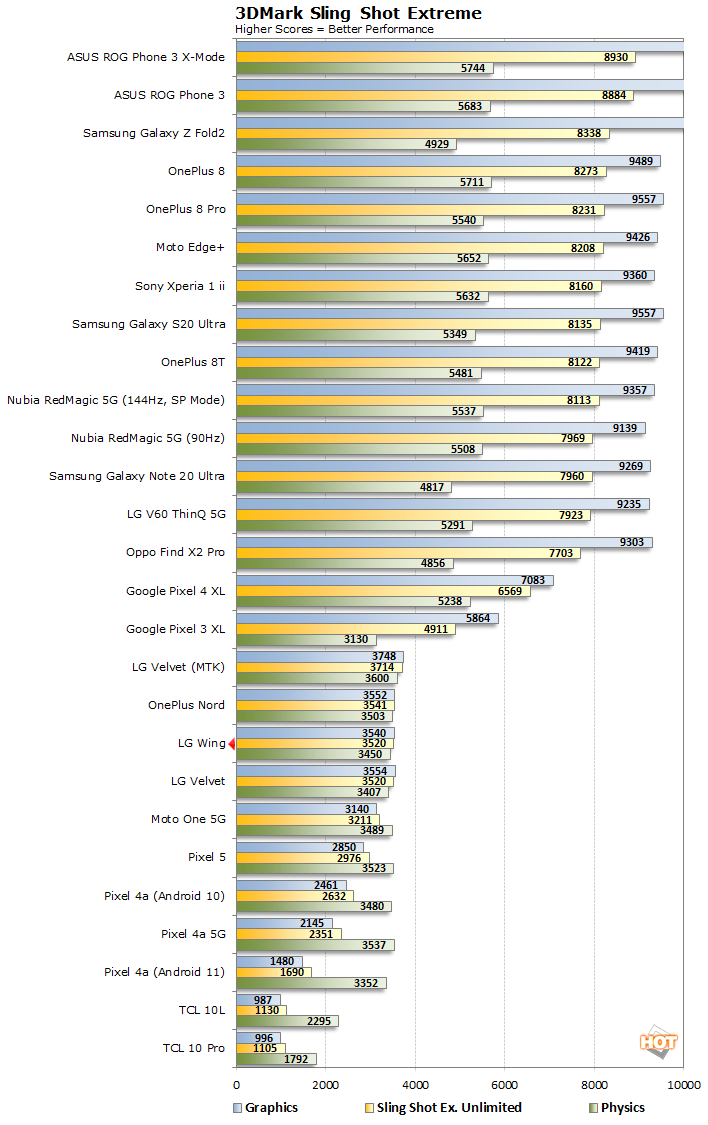 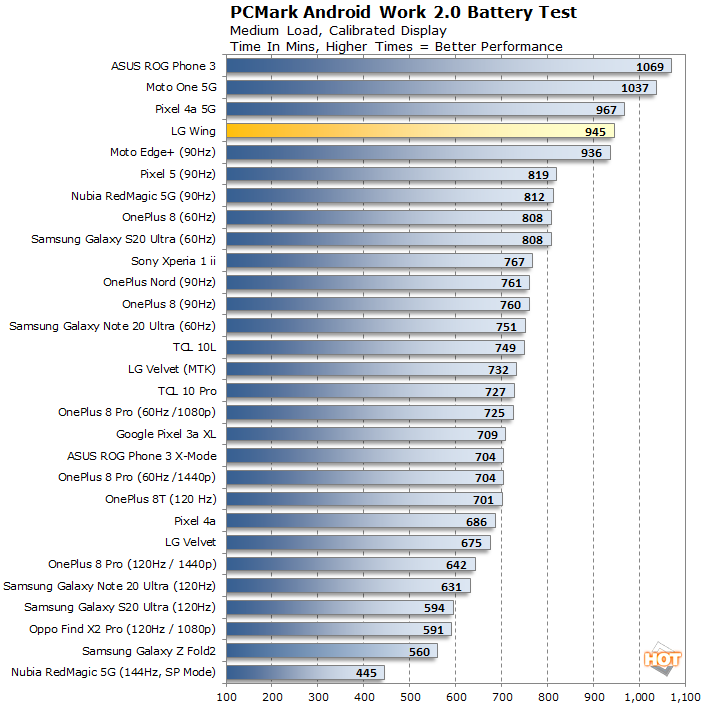 Battery life is fantastic. The Wing lasted 15 hours and 45 minutes in our PCMark battery test, which is truly impressive for a 4000mAh cell. Obviously the Snapdragon 765G is very efficient, and the 60Hz refresh rate also helps. When you’re ready to fill up, the Wing supports fast charging up to 25W (Quick Charge 4.0+ and PD 2.0) and Qi-compatible wireless charging. It ships with a 25W charger in the box.