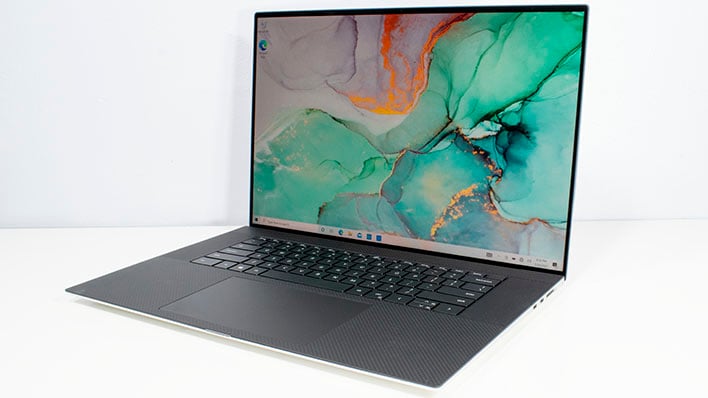 17-inch laptops are becoming somewhat of a rarity these days. Every manufacturer has a couple of models in their line-up, but they don't get a ton of attention because they're typically quite bulky and harder to tote around than sleeker, smaller machines. However, the system we'll be showing you today isn't just any run-of-the-mill 17" notebook. Dell's XPS 17 series has been cramming as much display real estate into as small of a frame as possible for a while now, and this year's model doesn't make any concessions in that regard. The newest XPS 17's footprint is just barely big enough to hold that panel.

That's not to say that the XPS 17 is all pizzazz and no performance, or places form over function. Quite the contrary, this year's model has been upgraded with Intel's Tiger Lake-H processors and NVIDIA's GeForce RTX 3000 GPUs. They're safely tucked away inside of what should be the fastest version of the XPS 17 to date. Its relatively sleek profile and moderate weight could also make this notebook pound-for-pound one of the fastest machines around, but let's not get ahead of ourselves. 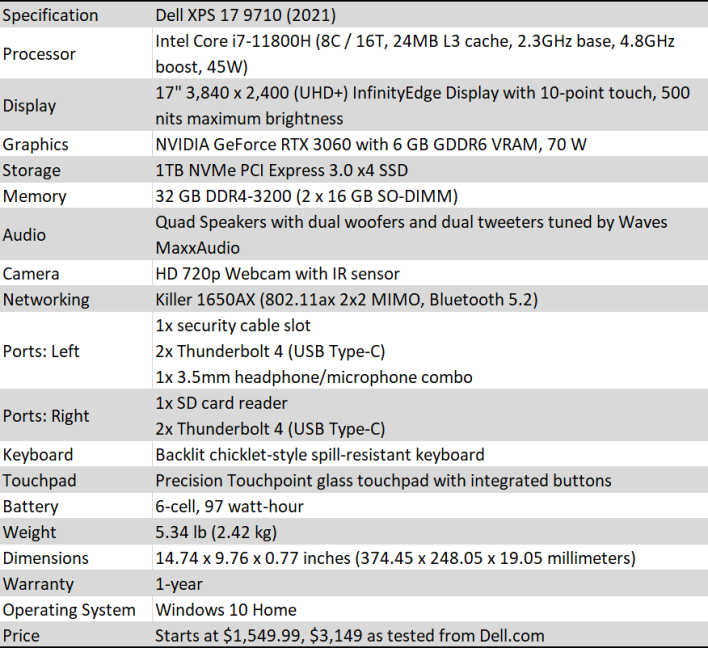 Dell packed our review unit with a Tiger Lake-H Intel 11th Gen Core i7-11800H, which is the middle child in the XPS 17 lineup and one of the faster notebook CPUs around. It's got eight cores, 16 threads via HyperThreading, and 24 MB of cache aboard. Maximum clock speeds top out at a speedy 4.6 GHz, up from a base clock of a modest 2.3 GHz. Only the Core i9-11900H is faster within this particular notebook's chassis, and the only difference seems to be around 300 MHz on the top end. In short, this CPU should fly. 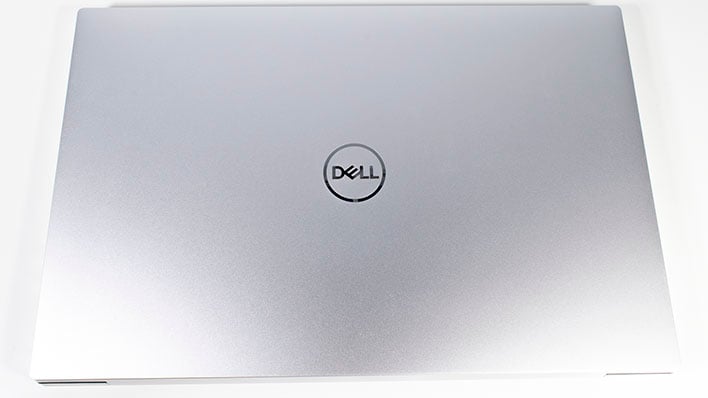 The processor drinks from a fountain filled with 32 GB of DDR4-3200 memory in a dual-channel configuration using a pair of SO-DIMMs. That's good news for prospective buyers who can buy what they need today and have the option of upgrading down the road. The same holds true for the 1 TB PCI Express 3.0 NVMe SSD which rides the standard M.2 2280 form factor. Lastly, networking comes from Killer's AX 1650 with Bluetooth 5.2.

Graphics duties are handled by the NVIDIA GeForce RTX 3060 with 6GB of dedicated GDDR6 VRAM aboard configured to use up to a 70-Watt TGP, that can dynamically scale up to 90 Watts if there's thermal and power headroom available. That's down a bit from the 125 Watts allocated to the GeForce RTX 3060 in the Alienware m15 R5 Ryzen Edition, but this isn't a gaming-first notebook. It should still be plenty fast to handle the vast majority of games at resolutions between 1080p and 1440p, and handle older titles at the native UHD+ resolution just fine. 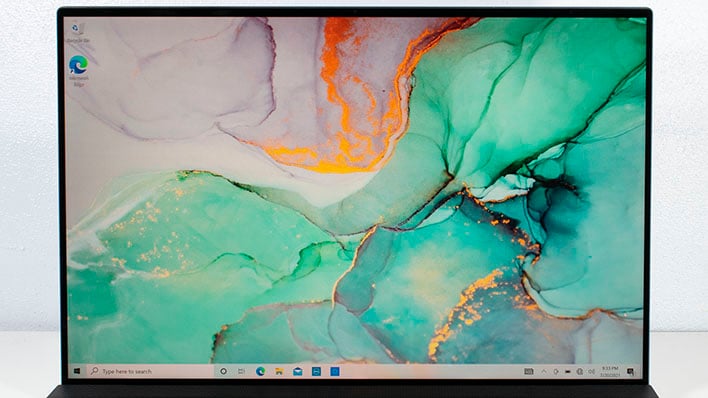 On the outside, the XPS 17 is an eye-catching Platinum Silver in a 143.9 square inch footprint that's not all that much larger than Apple's MacBook Pro 16 model's 136 square inches. The comparisons end there, though, as Apple has all but given up on Intel's CPUs, sticking with the 9th gen Core series until its own higher-end Apple silicon is ready, while Dell has moved on to the latest and greatest. The XPS 17's keyboard deck and palm rests are black with a carbon fiber appearance. Visually it's quite similar to last year's model, but it still looks pretty slick in person.

When we open the XPS 17 we're greeted by a huge 16:10 InfinityEdge display with a native resolution of 3,840 x 2,400, which is 11% more pixels than the typical 4K UHD notebook. The bezels are ridiculously thin on all four sides, giving it a whopping 90.3% screen-to-body ratio. The display has a maximum brightness of 500 nits, and at 17" it gets pretty bright in a hurry. The upgraded high-resolution display also reproduces 100% of the Adobe sRGB color space and 94% of the wider DCI-P3 spec. Viewing angles are very wide with minimal color shift, although it does get a bit dimmer at the extremes. The display also has multi-touch support, which feels a little weird to use on a notebook this large, though we imagine some folks would be interested.

The XPS 17 includes a 720p HD webcam with infrared sensors for Windows Hello. Because Dell gave the Latitude 7320 Detachable a 5-megapixel camera that captures 1080p video, it's rather disappointing to see a low-res sensor here. The good news is, video quality is fine for a 720p camera and it worked well enough in Skype and Teams calls. It's just high-time that $2,500+ premium laptops got with the program and bumped the spec to full HD. Inside the edge of the lid rest a pair of noise-canceling microphones that do a good job of blocking out the world while capturing our voices, too. 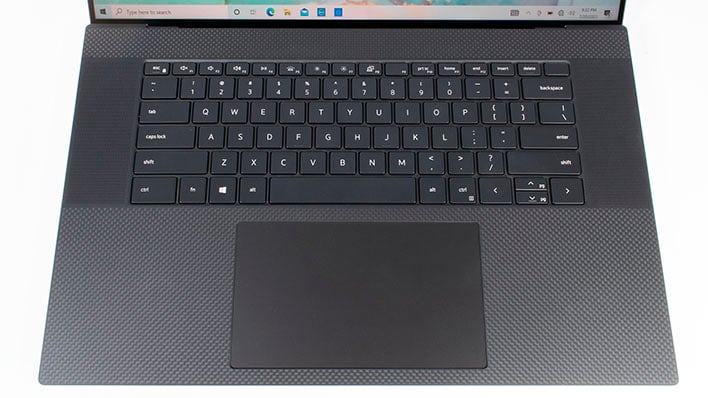 The palm rest is made from a carbon fiber composite that looks good and feels great. It should be pretty durable, too. The keyboard is the standard chicklet-style model with a key travel distance of 1.3 millimeters, and includes full backlighting with three different brightness levels. The keys felt good under our hands, and the keys are more or less full-sized which helps with accuracy. There's plenty of room in the 14.7 inch-wide chassis, and Dell makes good use of it. The Precision Touchpad, which supports full Windows multi-touch gesture support, is a generous 3.67" tall by 6" wide.

Dell gave the XPS 17 a quad-speaker array with a dedicated pair of tweeters and two woofers alongside. Much like other XPS notebooks, the company got audio plug-in maker Waves to tune them with its MaxxAudio algorithm. Most notebooks have a lot of high-end and mid-range, the latter of which can get kind of piercing after a while. On these speakers, the sound has had the midrange frequencies lightly scooped out, which doesn't add a bunch of bass to the output, but does make listening to voices more pleasant than usual. If that's not good enough, there's always the dedicated combo jack if you'd prefer to plug in your own headphones. 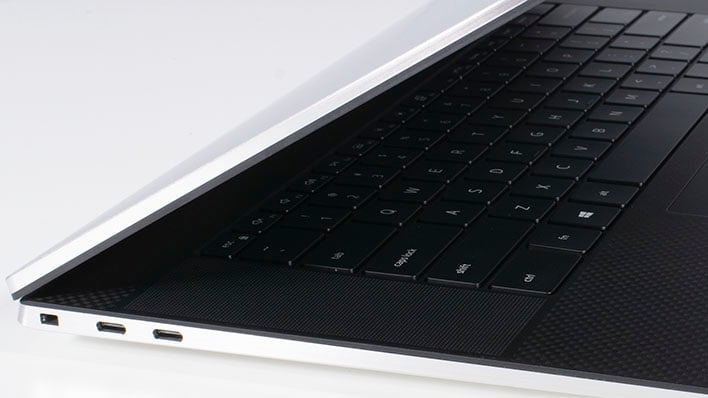 Much like last year's model, the XPS 17's external port array has gone full MacBook Pro -- there's Thunderbolt 4 and little else, besides that combo jack. All four connectors support the AC adapter's full 130 Watts of charging power, as the standard has recently been changed from its previous ceiling of 100 Watts. On the left, we have a pair of Thunderbolt 4 ports with the usual USB Type-C connector, which passes USB 3.2 Gen 2 at 10 Gbps and DisplayPort as usual. Towards the back of that side we have the typical Kensington-style lock port. 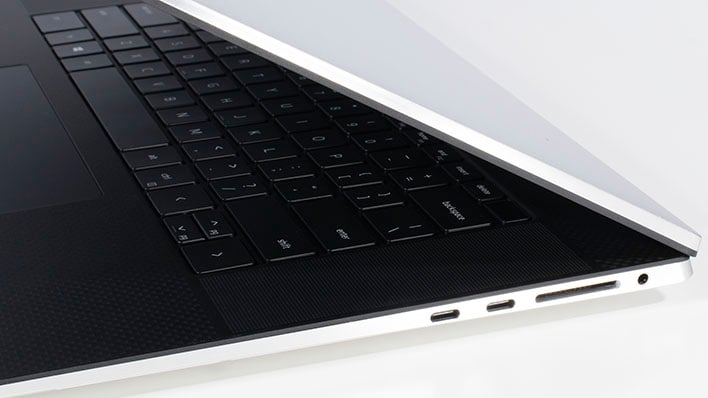 Around the right side, we have two more USB-C ports with Thunderbolt 4 and DisplayPort connectivity, along with the headset connector. There's also room for a full-sized SD card reader on this side, no doubt a welcome sight for owners of nice cameras that record to the medium. This reader is pretty speedy, too, as it could read Nikon RAW files from our SD card at speeds upwards of 90 MB per second. Photographers who needed to bring their own reader in the past can leave that at home now.

And because Dell knows that XPS 17 owners will need to live the Dongle Life, the company includes a tiny dock that converts a Thunderbolt 4 port to a USB 3.1 Gen 1 Type-A port and an HDMI 2.0b port to quickly connect with displays that have the ubiquitous input. This is nice to have, since so many peripherals are still using the older Type-A connector, and so many displays, projectors, and TVs have HDMI inputs.

Out of the box, the XPS 17 came with Windows 10 Home with the 20H2 update. Before performance testing, we updated the system's drivers and operating system fully, including the 21H1 update. The preinstalled software is mostly kept to a minimum, although Dell includes a 12-month subscription to McAfee's security suite in the box with the system. The system also ships with Amazon's Alexa app pinned to the taskbar, which is not part of the normal Windows 10 loadout. Everything else on the system is either a driver or a utility to manage the hardware. 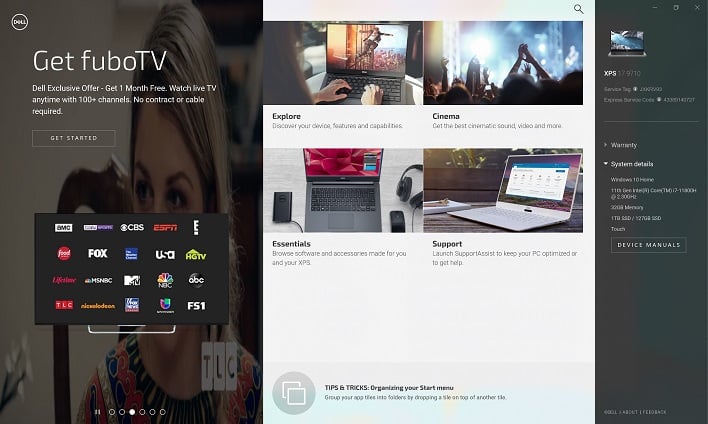 The My Dell app is home to all of the system management, support, and warranty features for the XPS 17. Unfortunately after a recent redesign, it's also home to ads not only for Dell services, but for its partners. We opened the app and looked around for a bit, and then left the room. When we returned, we found it had given a full third of the screen to an auto-playing video for FuboTV. There's no audio, fortunately, but it's annoying for a premium notebook to be bundled with ads. Paying customers lay down upwards of $3,000 for the hardware, depending on the options they select, so this is the last thing they should expect to find in a Dell support app.