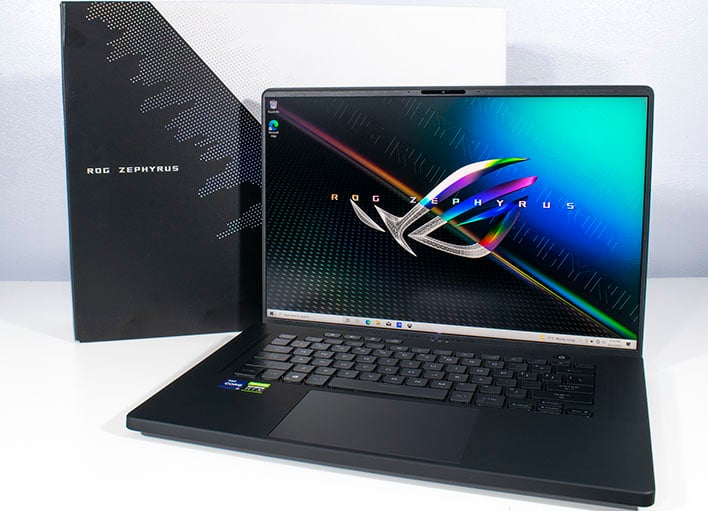 We were really impressed with Intel's latest high-performance notebook CPUs from the Tiger Lake-H family when we got to try them out in a test platform. Intel arguably produced the single fastest x86 notebook CPU on the planet, with blistering single-threaded speed and heavy multi-threaded prowess. However, we were itching to get our hands on a retail sample with these CPUs so we could verify that shipping products were just as fast. Enter ASUS and the powerful ROG Zephyrus M16, a brand-new model of sleek gaming notebook with NVIDIA GeForce RTX graphics and one of Intel's latest Core i9 processors.

ASUS didn't just incorporate Intel's latest mobile platform and call it a day, though. The company shoved a 16", 16:10 display into this notebook that has the exact same footprint as the recently-reviewed ROG Zephyrus G15. Will the high-end hardware, new display and its accompanying 94% screen-to-body ratio be enough to separate this gaming notebook from the pack? Let's meet the ASUS ROG Zephyrus M16 and find out... 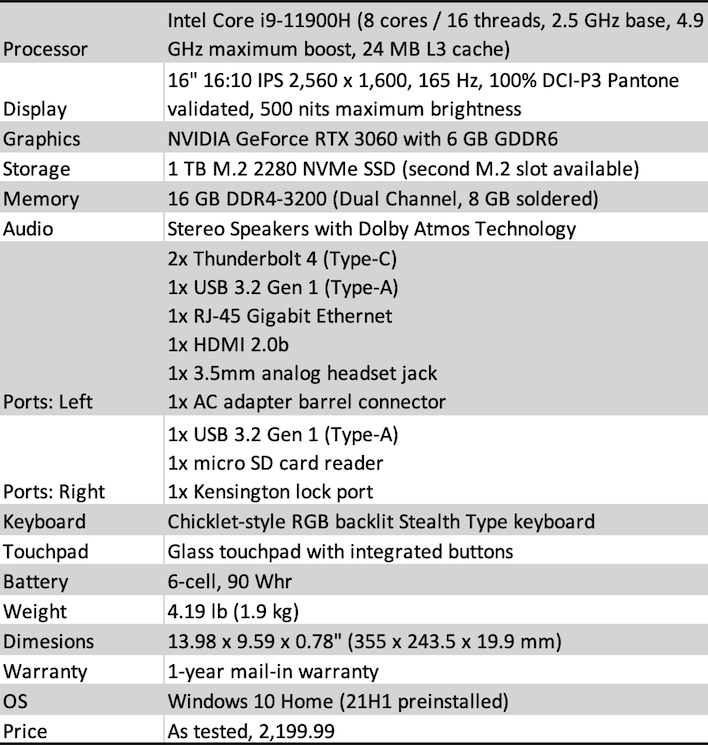 Internally, the big draw here is the Intel Core i9-11900H processor. This notebook is the first retail example we've had on hand with the blue team's newest Tiger Lake-H processor family, which fits eight Willow Cove CPU cores with 16 threads via Hyper Threading in a 45 Watt TDP. This particular CPU has 24 MB of L3 Smart Cache, Intel's UHD graphics with 32 EUs, and PCI Express 4.0 connectivity. A base clock speed of 2.5 GHz gives way to a maximum boost clock of 4.9 GHz when one core is in action. It should be pretty fast, to put it mildly. The test platform we evaluated previously had the very top of the line Core i9-11980HK, but we don't expect performance to drop off much at all here. 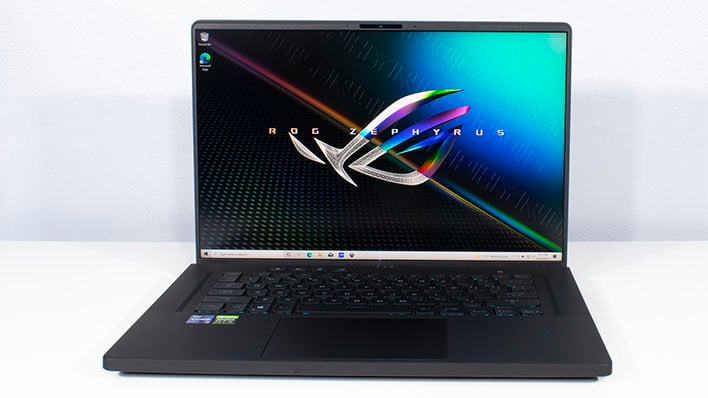 A gaming notebook is only as good as its graphics processor, and the ROG Zephyrus M16 has NVIDIA's GeForce RTX 3060 with 6 GB of GDDR6 memory on board. This is a more mid-range solution than the faster RTX 3070 and 3080, but it still features NVIDIA's ray tracing hardware and tensor cores required for Deep Learning Super Sampling (DLSS). The 6 GB of VRAM rides a 192-bit memory bus at 14 gigatransfers per second, good for 336 GB/sec of bandwidth. ASUS opted for the 80 Watt version of the GeForce RTX 3060, though the company says it can draw more power dynamically, up to 95 Watts, depending on the CPU load.

Main memory comes in the form of dual-channel 16 GB DDR4-3200. Half of the memory is soldered to the motherboard, while the other half comes in an 8 GB SO-DIMM. This can be replaced by up to a 32 GB SO-DIMM for 40 GB. In more upscale models that come with 16 GB soldered, that maximum is 48 GB of supported memory. Storage is provided by a 1 TB M.2 PCI Express NVMe solid-state drive. ASUS helpfully provides a second slot, which we'll see later on, in order to expand storage without removing the included drive.

Wireless networking is provided by Intel's latest Wi-Fi 6 card, which also includes Bluetooth 5.0 connectivity. This card is also user-serviceable or replaceable in a standard M.2 card. More serious gamers demand wired network connections, and the Zephyrus M16 comes equipped with an RJ-45 connector on the left side. That's hooked up to a Realtek Gigabit Ethernet controller. 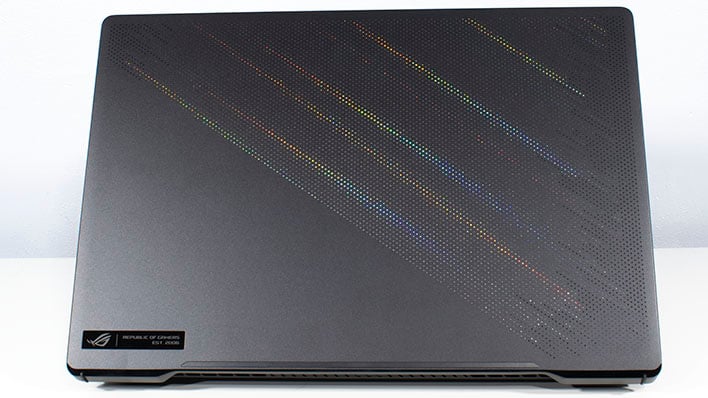 Like the ROG Zephyrus G15 before it, the M16 has a perforated lid with more than 8,000 precision-milled holes uncovering a prismatic film that reflects light, rather than an RGB LED spectacle. In the right light, the film reflects all the colors of the rainbow, and the effect is quite eye-catching. The chassis itself is an "off-black" polycarbonate that's very dark but not entirely blacked-out. Out of the box, it feels very much like ASUS took the basic design of the ROG Zephyrus G15, upgraded the screen and CPU, and polished a few things up along the way.

Despite the polycarbonate body, the Zephyrus M16 has a very solid build quality. The body feels rigid and the keyboard, which we'll get to in a moment, doesn't bounce or flex. The plastics on the palm rest have a soft touch feel to them, though, and it does pick up fingerprints pretty easily. Despite all this, the ROG Zephyrus M16 is rather lightweight for its size, weighing in at just 4.19 pounds. That might be a little concerning, since the metal heatsinks in notebooks are a big contributor to weight. Does that mean that ASUS cut corners on cooling? We'll have to see if there's enough heft to the cooler to keep the system comfortable in our thermal testing, which we'll get to a little later.

ASUS put a rather unique display into the ROG Zephyrus M16. The 16:10 display resolution generally only appears in MacBooks and the Dell XPS lineup, but the taller aspect has made its way to a gaming notebook, as well. The panel itself is a 165-Hz IPS unit that can display 100% of the DCI-P3 color space. The M16's display has had its color accuracy validated by Pantone and certified for Dolby Vision for HDR visuals. The backlight's maximum brightness tops out at 500 nits, so there won't be any HDR10 retina-searing visuals, but the brightness is more than enough for most duties. That means on top of gaming, the M16's display should be usable for color-critical work like photo and video editing.


Four ultra-thin bezels surround the M16's display. ASUS calls this notebook the world's first gaming notebook to have all four sides surrounded with such thin bezels. While we can't validate that claim, the 94% screen-to-body ratio is impressively high and should be a welcome sight for those who rely on multiple displays to get their work done. It's also allowed ASUS to keep the footprint at the exact same size as the 15" ROG Zephyrus G15. We really like this display, to say the least.

Despite those thin bezels, ASUS found room to wedge a webcam into the top of the display. The webcam only supports 720p video, much like most gaming notebooks, but at least it's there unlike the Zephyrus G15. The camera supports 3DNR, which is a noise-reduction algorithm that uses multiple frames of video to improve image quality at low lights. Think of it as a temporal de-noise filter. A pair of noise-canceling microphones flank each side of the webcam. For the usual Skype or Microsoft Teams call, the camera and microphone do a good job. Streamers will definitely want a nicer camera, though. 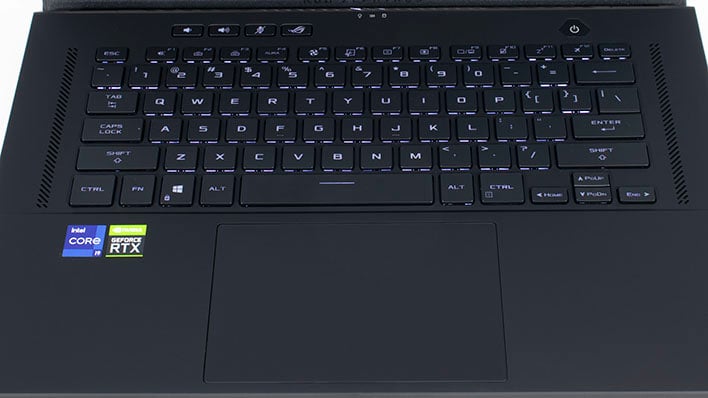 Below the screen is ASUS's Stealth Type keyboard. The company says that each key stroke registers at 30 dBA or less. We're not sure how the company measures this, though, because our sound meter also has a 30 dBA noise floor and it can definitely register the keystrokes. At any rate, it's still pretty quiet, and we didn't have any issues with dropped keystrokes or duplicated input. As always, we produced this review using the notebook's keyboard, so we've had quite a bit of experience. The single-zone RGB backlighting can be disabled or controlled through ASUS's Armoury Crate software.

Below the keyboard is a unibody glass touch pad with integrated buttons. It supports all the Precision Touch Pad features that Windows 11 will apparently require. That includes multi-touch and gesture support. The buttons integrated into the bottom of the touch pad are responsive, and fine for navigating in Windows or on the web. Most gamers will want a full-fledged mouse, however. That's not a slight against the M16. Mice are just better for games. 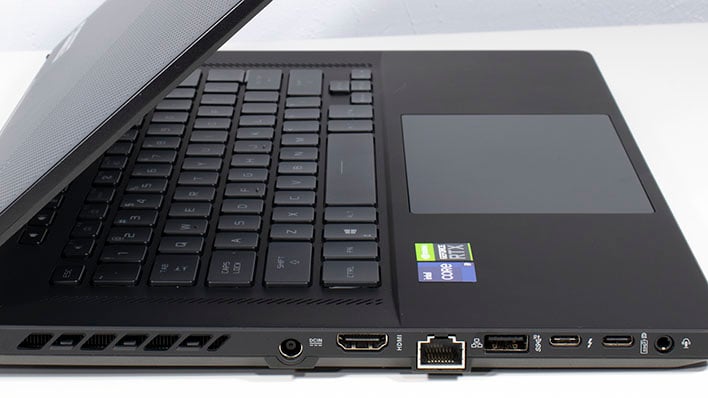 The ROG Zephyrus M16 has a nice array of external connectivity. Around the left are the two Thunderbolt 4 ports, which also each handle DisplayPort 1.4 and 10 Gbps USB 3.2 Gen 2. There's also a single 5 Gbps USB 3.2 Gen 1 Type-A port, the HDMI 2.0b connector, and a jack for analog headphones and headsets with integrated microphones. If this gives you a sense of deja vu, the Zephyrus G15 has the exact same port layout in the same order and even with the same spacing, which contributes to the feeling that the two might have more than a few interchangeable parts.

When we move around to the right side, the port selection slims down quite a bit. The system just has a single USB 3.2 Gen 1 Type-A connector, a micro SD card slot, and the typical Kensington-style lock port. The system was definitely designed with righties in mind, since all those ports on the left would interfere with left-handed mousing. By contrast, the right side's relative lack of ports makes it easy to move a mouse freely. 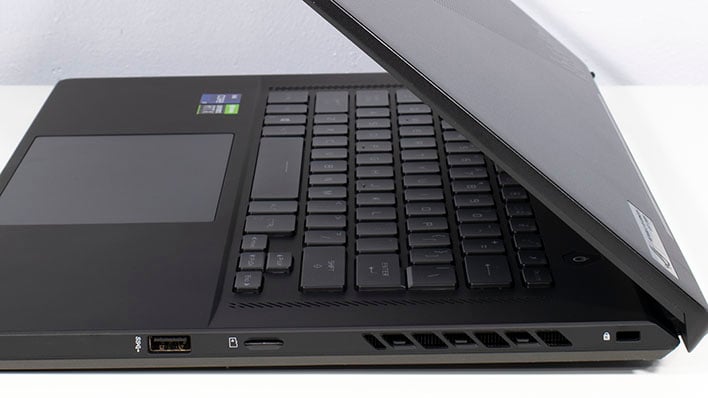 Both sides also play host to a pair of vents. Two more vents sit along the back edge of the notebook and push heat up in front of the display, like many other notebooks. The ROG Zephyrus M16 seems to favor these rear vents, but under heavy load, both the left and right side get pretty warm. Our mouse hands could certainly feel the heat after a while during extended Gears 5 and Shadow of the Tomb Raider sessions on the M16. We'll measure how warm the system gets in the thermal testing section. 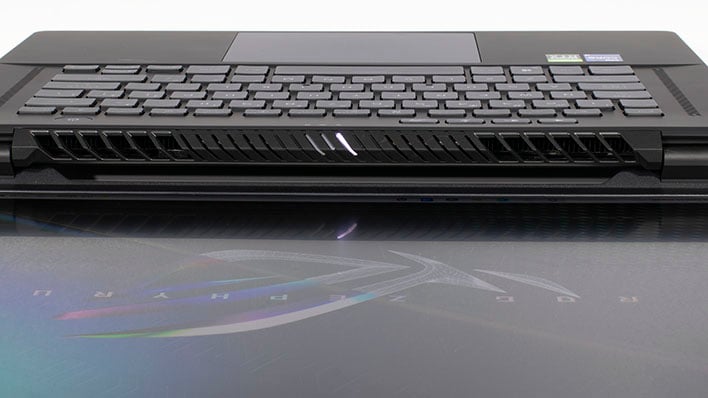 The ASUS ROG Zephyrus M16 ships with Windows 10 Home. Our review unit came pre-updated to the 21H1 update from earlier this year, but still had a few Windows updates to download. The only additional software bits that were installed ahead of time were the system's necessary drivers, MyASUS, and Armoury Crate. We've talked about both of these in detail in our ROG Zephyrus G15 review, but we can hit the highlights again.

MyASUS holds all of the support and diagnostic tools. System specifications, battery health, and customer support can all be found here. ASUS also produces its own smartphone integration tool similar to Microsoft's Your Phone and Dell's Mobile Connect software, called Link to MyASUS. From here you can share the phone's screen to the desktop, transfer files to and from connected devices, and get notifications from any Android device. 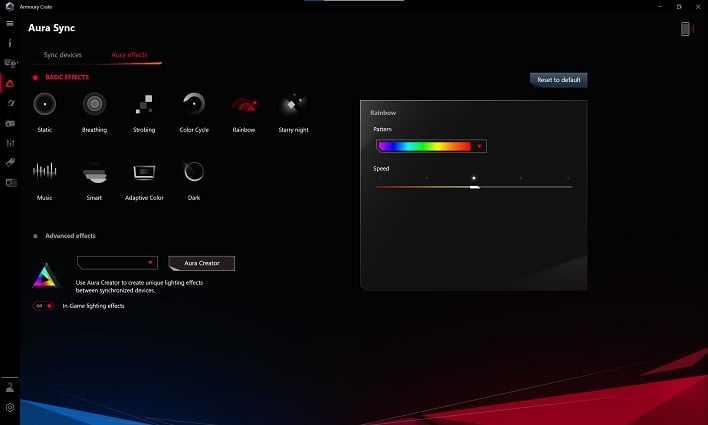 Armoury Crate will no doubt be familiar to users of ASUS ROG or TUF series motherboards. This app controls multiple power profiles, RGB lighting effects via AURA Sync, and serve as a game launcher. The power profiles include the same Turbo and Performance profiles as the ROG Zephyrus G15, but unlike that Ryzen-powered notebook, these toggles have almost no effect on performance. We tested single-threaded, multi-threaded, and gaming scenarios with both profiles and found that it rarely affected performance beyond what we'd consider to be the margin of error. On occasion it even showed Turbo to be slower than Performance due to the non-effect it had. Fan noise was a bit more pronounced so it did cool better, but that didn't lead to faster task results or higher frame rates.

Now that we have gotten to know the ROG Zephyrus M16, let's take a look at system performance next...
NEXT PAGE