In terms of IO connectivity, the 3rd Gen Threadripper 3000 platform offers up to 12 USB 10Gbps ports, four USB 480Mbps ports, 20 SATA 6Gbps ports, and the aforementioned 72 usable PCI Express 4.0 lanes. There are actually 64 total PCIe lanes in the processor itself and 24 in the chipset, but 12 are used to connect the processor to the chipset and other components.

To test the 3rd Gen Ryzen Threadripper 3000 series processors, we got our hands on a couple of motherboards from ASUS and MSI, the ASUS ROG Zenith II Extreme and the MSI Creator TRX40. 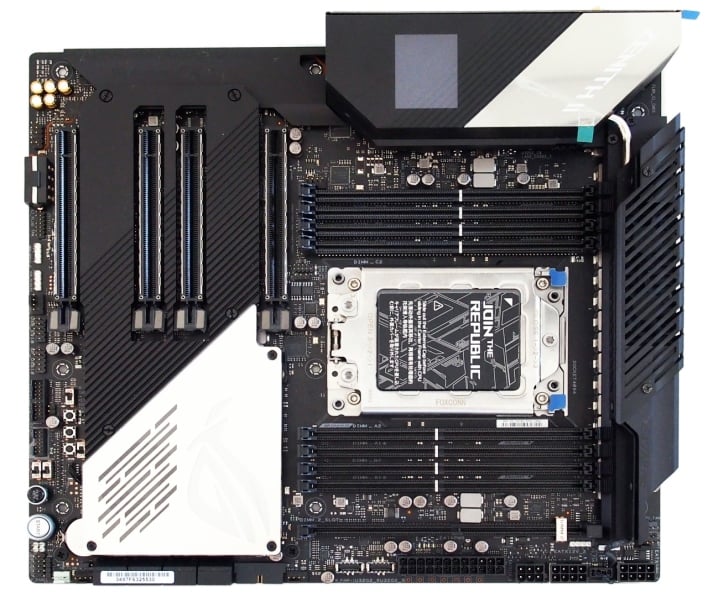 The ASUS ROG Zenith II Extreme is about as over-the-top a motherboard we have seen. This thing weighs a ton and is packed with elaborate cooling, and color OLED display, and a ton of additional features, over an above what’s offered by the chipset alone.

Like most of ASUS’s current-gen enthusiast-class motherboards, the ROG Zenith II Extreme has built-in AURA SYNC LED lighting, which can be extended with additional lighting strips should a user want to add more lighting throughout a system. The board also has metal reinforcements on its expansion slots, and heavy-duty metal heat spreaders on the chipset and VRM. Additional shielding covers the board area between the PCIe slots, the back panel I/O, and real-estate around the chipset as well. The lower portion of the chipset heatsink is also removable, and provides additional cooling for solid state drives installed into the M.2 slots beneath. 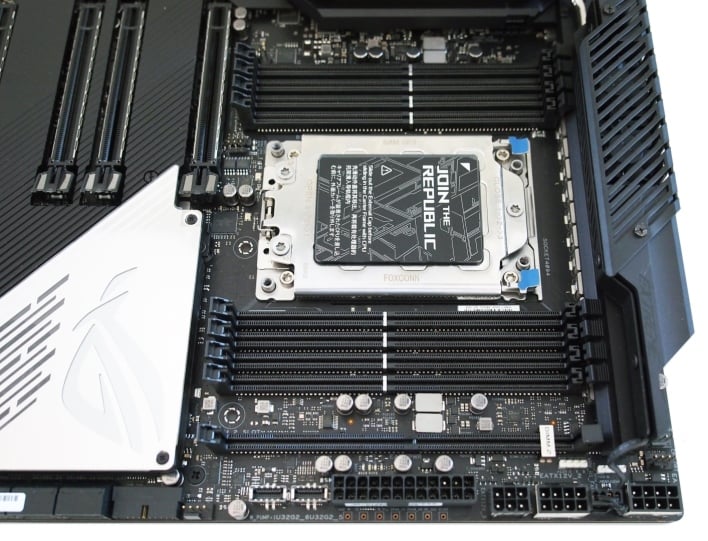 The ASUS ROG Zenith II Extreme features a mouse-friendly BIOS / UEFI that’s easy to navigate and offers an extensive array of overclocking and performance-related options. The BIOS on this board is outfitted with everything from high resolution fonts to the latest version of ASUS’s hardware monitoring and fan control functionality. The ASUS ROG Zenith II Extreme also features high-end capacitors and chokes throughout its design to improve long-term reliability and overall efficiency. The board is outfitted with an all-digital 16-stage PWM as well, to further improve power efficiency and smooth power delivery to the processor, RAM, and add-in cards. 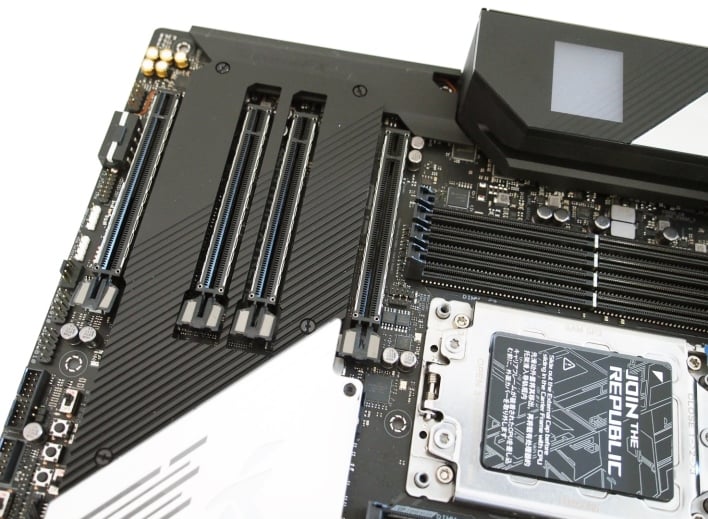 As is the case with all TRX40-based boards, the ASUS ROG Zenith II Extreme is compatible with AMD’s Ryzen Master performance tuning utility for tweaking performance from within Windows, but the UEFI is outfitted with all of the overclocker-friendly tools we’ve come to expect from ASUS for manual tweaking as well. The fan controls on the board are robust and ASUS has put in additional effort to ease configuration, by offering an array of auto-tuning options and presets that can be saved to individual profiles.

In addition to the aforementioned items, we should point out that the ASUS ROG Zenith II Extreme offers 8-channel audio with a Realtek S1220A codec and ES9018Q2C DAC, and incorporates audio shielding, discrete power delivery, and high-end Japanese capacitors for clean sound (120dB SNR). It’s got lighted audio jacks too. There’s also a very cool color OLED display on the board, above the back-panel IO (adjacent the CPU socket) that can display things like CPU temperature, fan speeds, or error messages on an easy-to-read display. 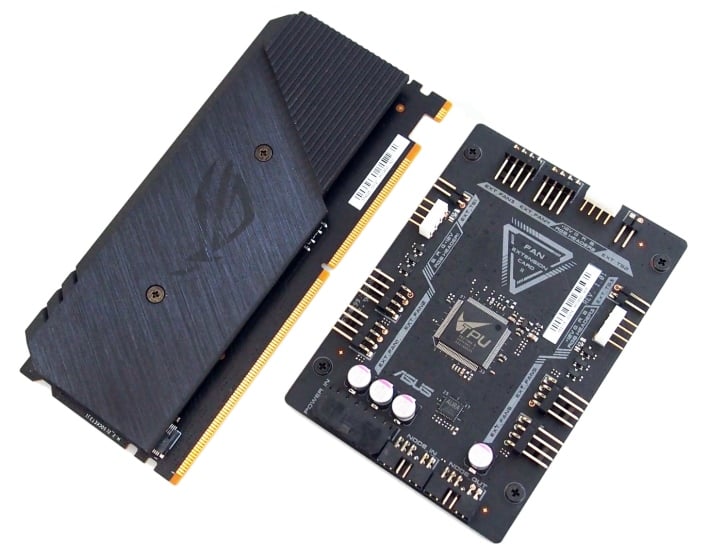 Over and above what’s actually built into the board or available through the chipset, ASUS throws in a wide array of accessories and integrated peripherals including a boatload of decals, documentation, cables, multi-GPU bridges, etc., along with an optional fan expansion card to adding a bunch of additional cooling to a system.

We found the layout of the ASUS ROG Zenith II Extreme to be very good and also really like the overall aesthetic. Your tastes may vary, of course, but we think this is one heck of an attractive motherboard in our opinion. 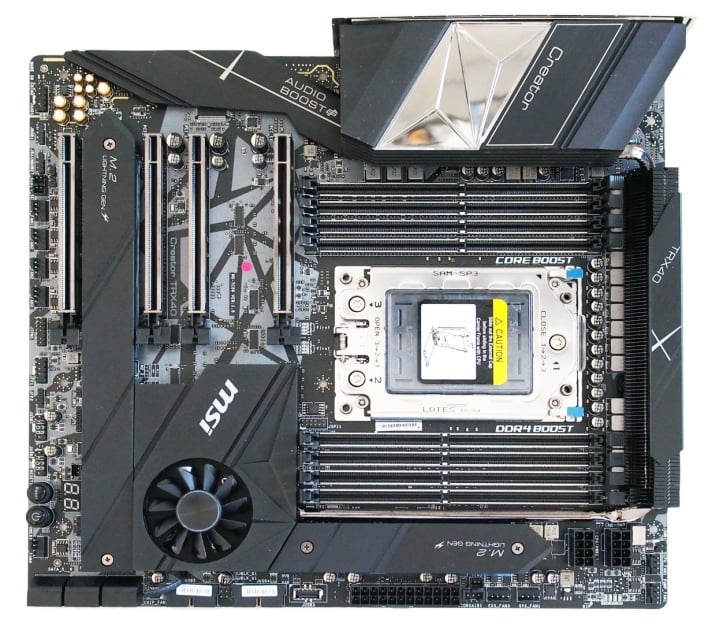 Next up we have the MSI Creator TRX40. Like ASUS, MSI definitely kicks things up a few notches with this motherboard. The Creator TRX40, for example, has customizable RGB “Mystic” lighting, that can be extended with additional lighting strips, metal reinforcements on its expansion and memory slots to add rigidity, massive cooling for the M.2 slots, chipset and VRM – complete with hear-pipes -- and a 16 phase 70A digital power power solution with dual, 8-pin power feeds. 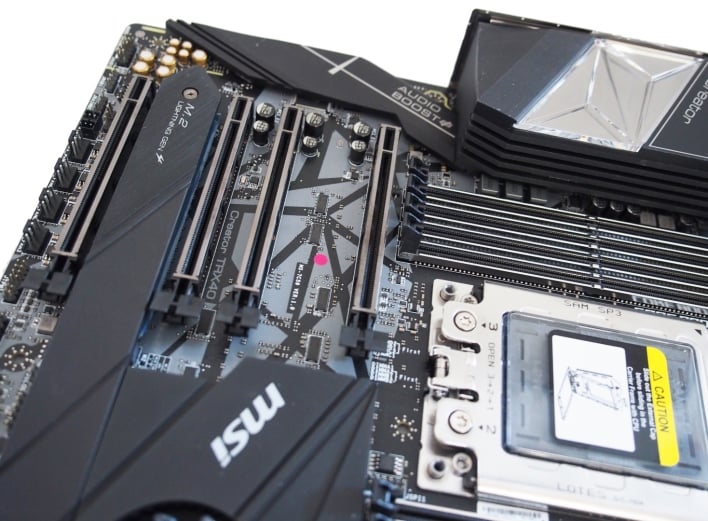 The MSI Creator TRX40 features a mouse-friendly BIOS / UEFI that’s easy to navigate and offers an extensive array of overclocking and performance-related options. MSI calls it their Click BIOS 5, and it sports everything from illustrated menus to the latest version of MSI’s hardware monitor functionality. The Creator TRX40 also features an array of durable Titanium chokes, in addition to high-conductivity polymer and / or solid capacitors throughout, to improve long-term reliability and overall efficiency. 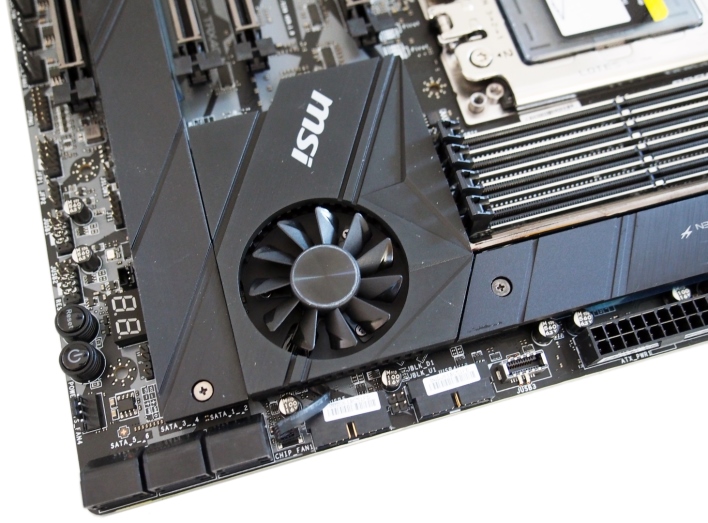 The MSI Creator TRX40 also offers easy overclocking by way of its OC Genie 4 and DDR4 Boost features, but the UEFI sports all of the overclocker-friendly tools we’ve come to expect from MSI for manual tweaking as well. The fan controls on the board are very robust and MSI has put in additional effort to isolate the memory circuitry to ensure maximum compatibility, clean signaling and the highest possible overclocks. 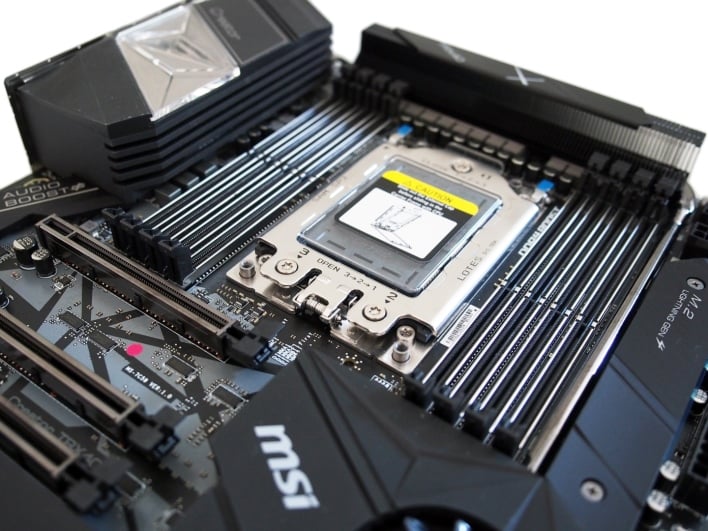 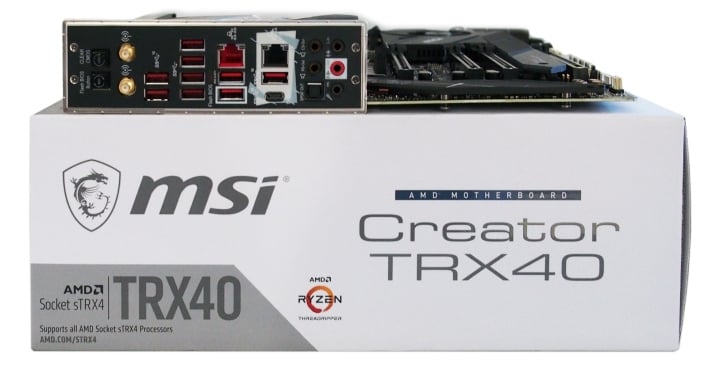 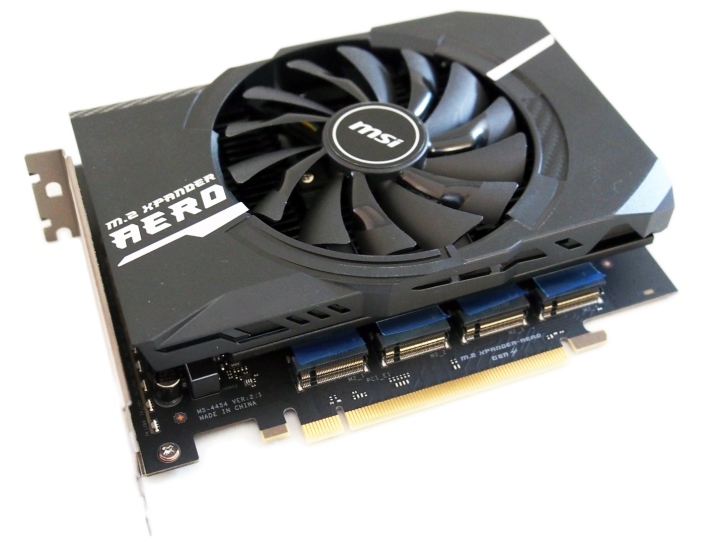 MSI also includes a ton of accessories with the board, including an actively cooled PCI Express x16 M.2 expansion card that can accommodate four M.2 SSDs. This is the motherboard we used for our test platform while benchmarking the 3rd Gen Threadripper 3000 series processors. 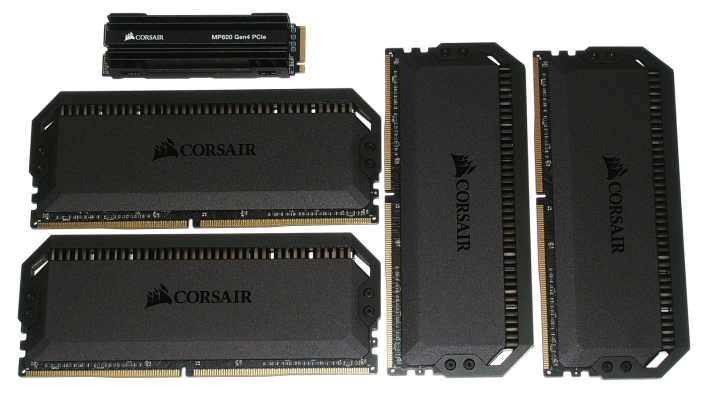 AMD also included a quad-channel Corsair Dominator RGB RAM kits and a PCI Express 4.0 MP600 SSD for testing. Like all of the first-wave PCI Gen 4 SSDs, the Corsair MP600 is build around a Phison controller and is capable of sequential transfer speeds in the neighborhood of 5GB/s.
PREV PAGE NEXT PAGE