AMD has been on an impressive run since the release of its first-generation Ryzen processors a couple of years back. After a long stretch playing second-fiddle to Intel in the desktop processor space, unable to effectively compete at the high-end of the market, AMD’s Zen micro-architecture propelled the company into a much more competitive position. And follow-on products turned the heat up on Intel even further.

Today, that heat becomes a blazing hot inferno as AMD completely reshapes the HEDT landscape with a pair of processors as impressive as we’ve ever seen. At the risk of spoiling the rest of this review, AMD not only overtakes Intel in the HEDT market with this release of its 3rd Generation Threadripper 3970X and 3760X, it blows past them and leaves Chipzilla in the dust under certain workloads.

The 3rd Generation Threadripper 3970X and 3760X are 32-core (64-thread) and 24-core (48-thread) processors, respectively, much like AMD’s previous-generation WX-series Threadrippers. These new processors, however, expand upon the goodness that arrived with mainstream Zen 2-based Ryzen 3000-series processors and erase many of the caveats that came with previous-gen, many-core Threadrippers. Take a look at the specifications below and then we’ll dig in a bit deeper to show you what we’re talking about… 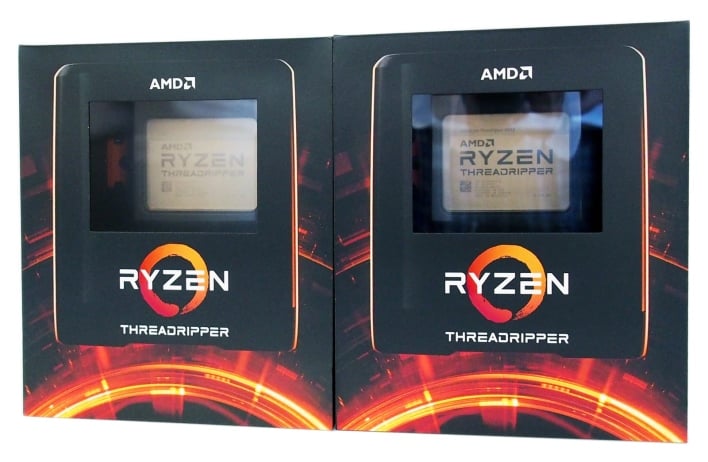 Find AMD 3rd Generation Ryzen Threadripper 3000 Processors @ Amazon
Before we continue, note that 3rd Generation Ryzen Threadripper processors leverage all of the same technologies that debuted with the mainstream Ryzen 3000-series processors for socket AM4. They leverage the same chiplet topology, 8-core 7nm Zen 2 CPU chiplets, and 12nm IO die, all linked together via AMD’s Infinity Fabric – there’s just double of everything crammed under those integrated heat-spreaders.

As such, we won’t be digging into the architectural details again here. If you’d like a refresher of Zen 2 and all of the changes and enhancements AMD made with its latest CPU architecture, be sure to check this article out.

At first glance, the 3rd Generation Threadripper 3970X and 3760X looks just like their many-core predecessors. They use what looks like the same socket (but is not – more on that later) and are compatible with the same memory, coolers, etc. From the top and bottom, there’s not much to see that’ll appear any different than previous-gen Threadrippers, but a lot has changed. 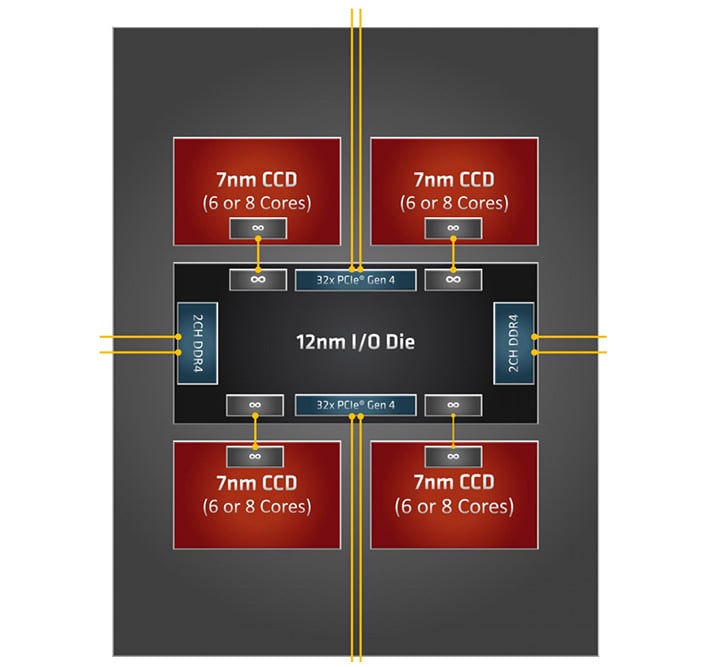 The CPU cores at the heart of the 3rd Generation Threadripper 3970X and 3760X are grouped into four, 7nm 8-core chiplets (with either 6 or 8 cores enabled), each with dual, four-core compute complexes (CCX). Those chiplets are linked to an IO die (manufactured at 12nm) that houses the memory controller, PCI Express lanes, and other off-chip IO. Instead of having one large die like most previous-gen processors, like the Ryzen 3000 series, 3rd gen Threadrippers are comprised of multiple chiplets that are linked together via AMD’s Infinity Fabric. 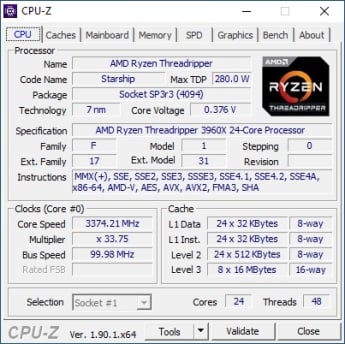 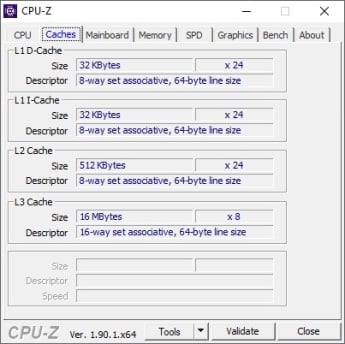 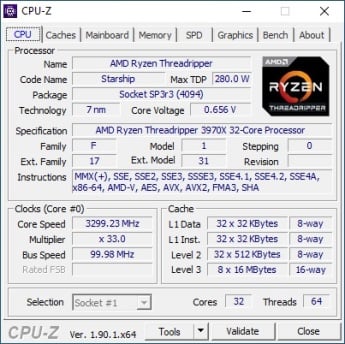 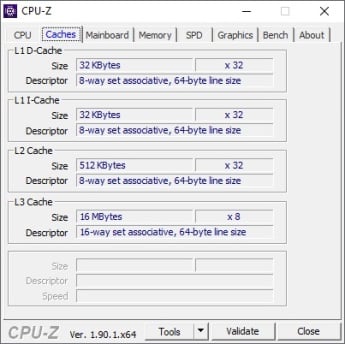 Like the previous-gen Threadrippers, AMD has gotten creative with 3rd Generation Threadripper 3000-series packaging. The processors are shipped in relatively large boxes, which contain a plastic display case that holds the processors upright in a pedestal. 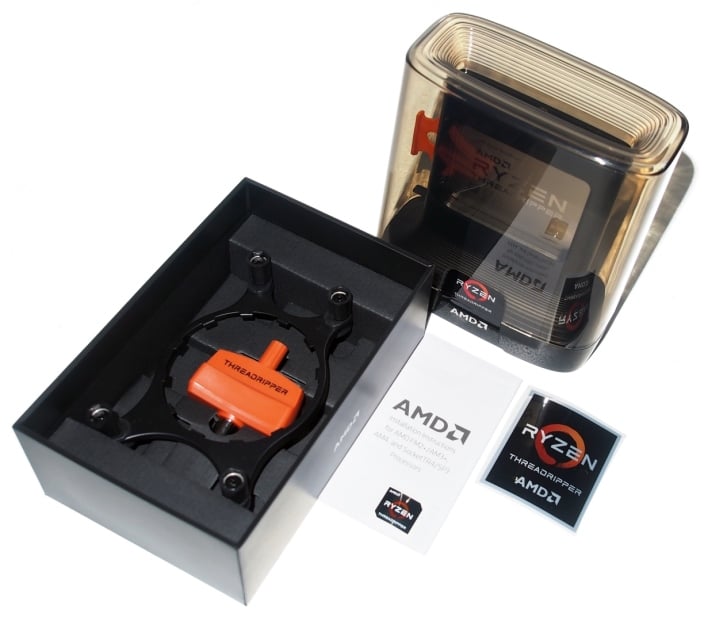 Underneath the case, AMD includes a mounting bracket for circular Asetek style AIO liquid coolers, some basic documentation, a couple of Ryzen Threadripper decals (one large, one small), and a Torx torque-driver for engaging / disengaging the processor socket. If you haven’t seen how AMD Threadrippers are installed into their sockets, be sure to see Dave do the deed in this video -- subscribe and hit that reminder bell while you're on the channel too. 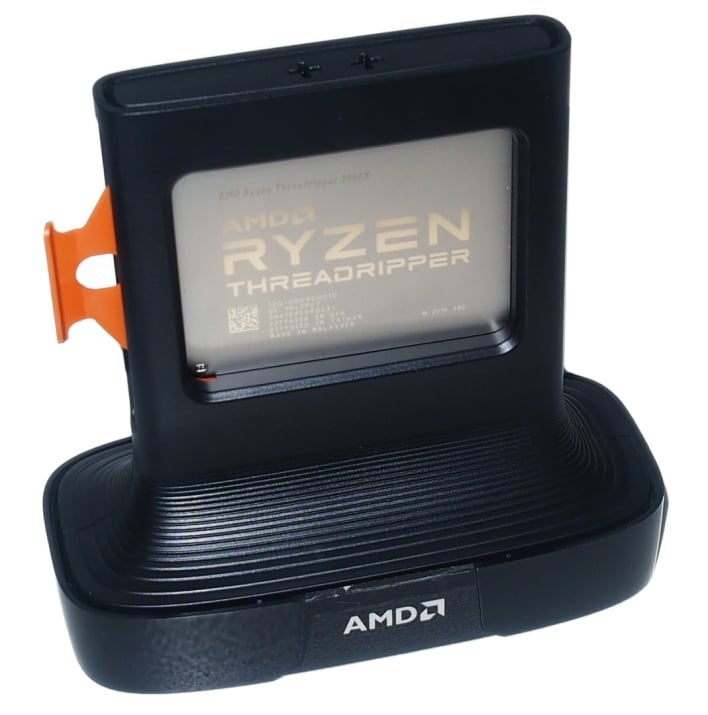 The top of the processor’s display case pops off to reveal the pedestal that holds the CPU. There is small clip on the side that locks the processor in place. Once removed, the processor will slide right out of the side stand. The packaging is not quite as in-your-face as previous-gen Threadrippers, but it’s unique nonetheless.
NEXT PAGE